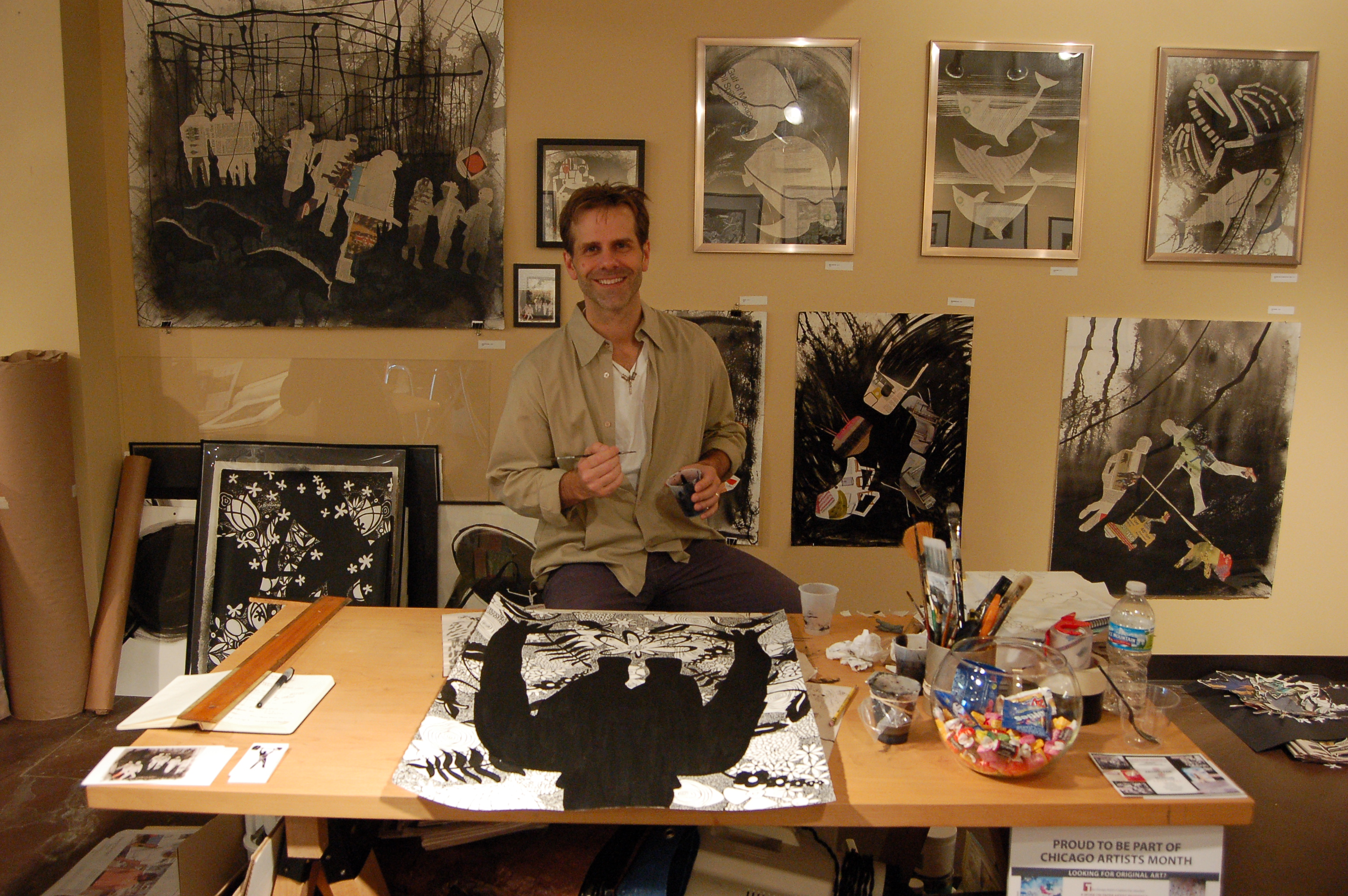 The best feeling for me is when something comes full circle – especially when it involves art. Mark and I first met when I helped coordinate the 2009 BFA show at Columbia College. Mark was one of the graduating fine artists in the show. As a matter of fact he was also one of the first artists I had ever done a studio visit with. The work of Mark Moleski was progressing amazingly then and it so great to be able to continue the conversation we started a little over two years ago about the same body of work and where it is now.

As the residency continues I have been meeting and speaking with the participating artists to learn more about their experiences and document the space and their work on the SIFC Chicago website. Below is a transcript of an interview/conversation between Mark Moleski and myself.

Nicolette Caldwell: Can you explain a little bit about the residency?

Mark Moleski: This is an artist residency of six artists that are working in the residency. It is through the Chicago Merchandise Mart and the Chicago Artist Coalition. They offered the space to us for six months and two weeks ago we just were informed that it has been such a good deal for everyone that they extended it for another six months. So we will be here for a year total. It has been a wonderful opportunity and we are all excited to be here.

NC: Was there an application process?

MM: Yes, we had to apply. There was a call for artists for the residency. We had to interview and show our portfolios and then the CAC made their selection through that process. It has been a good deal.

NC: Can you talk a little more about the reason why CAC chose to make it specifically a works on paper residency?

MM: It has to be works on paper because in the Mart there isn’t any water source or the right ventilation in the actual space.

NC: Can you explain the process of your work?

MM: The process of my work started with the Untold Series. In my work the silhouette is a constant theme in a lot of my work and I deal with contemporary life, politics and fashion. In the media, I find that the stories we receive are one-sided, sensationalized and taken out of context. Even with digital photography that cannot always be trusted either because it can be manipulated or reworked. So I feel like since you cannot truly rely on reporting what I’ll do it take different images from different parts of the paper, different stories and combine them to make up a whole new story. I work a lot with India inks and I like it because it is manageable with uncontrollable results. My work also has a lot of graphic influence as well so I like to combine more of the graphic with fine art.

For instance, this piece is titled Dangerous Play and when you look at it so see the soccer ball so you might think this is a soccer game and actually the term dangerous play is an actual soccer term but when you look closer there are actually different conflicts going on around the world. In my silhouettes that I use from the paper imbedded in the actual silhouette is the image of the photograph used in the paper. When I cut the silhouette out I cut parts out of the image or the story to further illustrate that you do not always get the full story. And I am not necessarily blaming the writer, reporter or the interviewee because you and I can also read the story and take something completely different away from it. It is just the nature of reporting basically.

NC: This piece in particular makes me think of the nature of violence in general. Even when it comes down to the sports industry it is all about conflict. Maybe the root of that is just aggression in general. Did this particular piece start with the idea of soccer or sports and then you ended up finding other articles that intrigued you?

MM: Actually it was the reverse of that. It started being more about the different conflicts going on around the world and I wanted to add a different angle and so I threw the soccer ball in there. When I had it set up at first it looked already as if they were in a state of play basically and it didn’t really come across at first as different conflict and so I threw the soccer ball in and then the term dangerous play for the title and so that creates the whole piece.

And this piece here is called Faded Glory and what this deals with as well is that there are all these soldiers that are carrying this casket with a member that was lost in their regime and I have fashioned it in a way that the blues of the paper sort of all combining together and then you have the reds and whites. When I put it together it had a look of a shredded flag type of feel and so that is why I went with the faded glory theme that deals and relates to one of the articles used in this piece that deals with the deaths in Afghanistan reaching a thousand at that time.

NC: Your work has started to evolve more from your original process. You have been working with different materials and adding different context.

MM: Yeah, there are so many different angles that I can go to with these pieces and I always seem to come back to them. I have been dealing more with color and when I began doing these I was paying more attention to the images probably because of my graphic design sensibilities. So the images of the piece really struck out. In my later pieces I have been trying to deal more with the article as well and incorporating what more of what the article is about to make up different stories. So you look into it deeper because it is the image with sections of the article.

This piece is called Fish Bowl and it is composed of different images of Malia the President’s daughter and when they first got their dog they were photographed at every different angle by millions of photographers so I sort of rearranged it so they were just a fish bowl basically. So I have been working more with the titles as well to create more of a story.

NC: What do you think your work adds or subtracts to after you rearranged the media the continuous perpetuation of over saturated redundancy by the media? How does that affect the story?

MM: It is a different way of looking at the piece. In my earlier pieces I basically wanted it to be up to the viewer to fill in the gaps since you never get the full or truest version of the story. And I was trying to keep the titles more ambiguous so that the viewer can make their own call or judgment of what the story is about. In these later pieces again I have been trying to fill in some of those blanks and have me tell the story.

NC: We can always relate to images regardless if the text is there or not especially with current events. It is interesting because the fact that you are keeping some of the text but then you are more or less focusing on the image and then re-contextualizing it in the form of a silhouette to make the viewer less reliant on the text.

MM: So then they can look at the image and create their own story that way or look at the text and fill in the blanks.

NC: What about your new series?

MM: These are rather different from my Untold Series. The silhouette has been a constant theme in my work. My silhouettes forms here deal with wrestlers or men that are in different forms of exercise. I am sort of balancing masculinity with femininity with the floral design pattering in the background.

I also do like working with the newspaper because they are in decline and maybe fifty years from now my work will serve as a reference to what was going on now.

NC: Since you are thinking about what people might think about your work in the event that our lifetime has passed what do you think about pertaining to your current audience or potential clients?

MM: First it comes with the images so I like to look at images that strike me in a way that I feel I can work with. I have had some pretty good success. What is good about working in the Mart is that there are always designers that come through that need work for their clients or what not so there is a lot of networking that goes on. So it may not happen now but maybe down the road they will keep you in mind.

NC: Mark, I appreciate you being able to come and speak with me so early. We really are excited to add all the artists in this space to our archive as well as some of the transparency of this residency program.

For more information about artist Mark Moleski you can check out his website and blog.