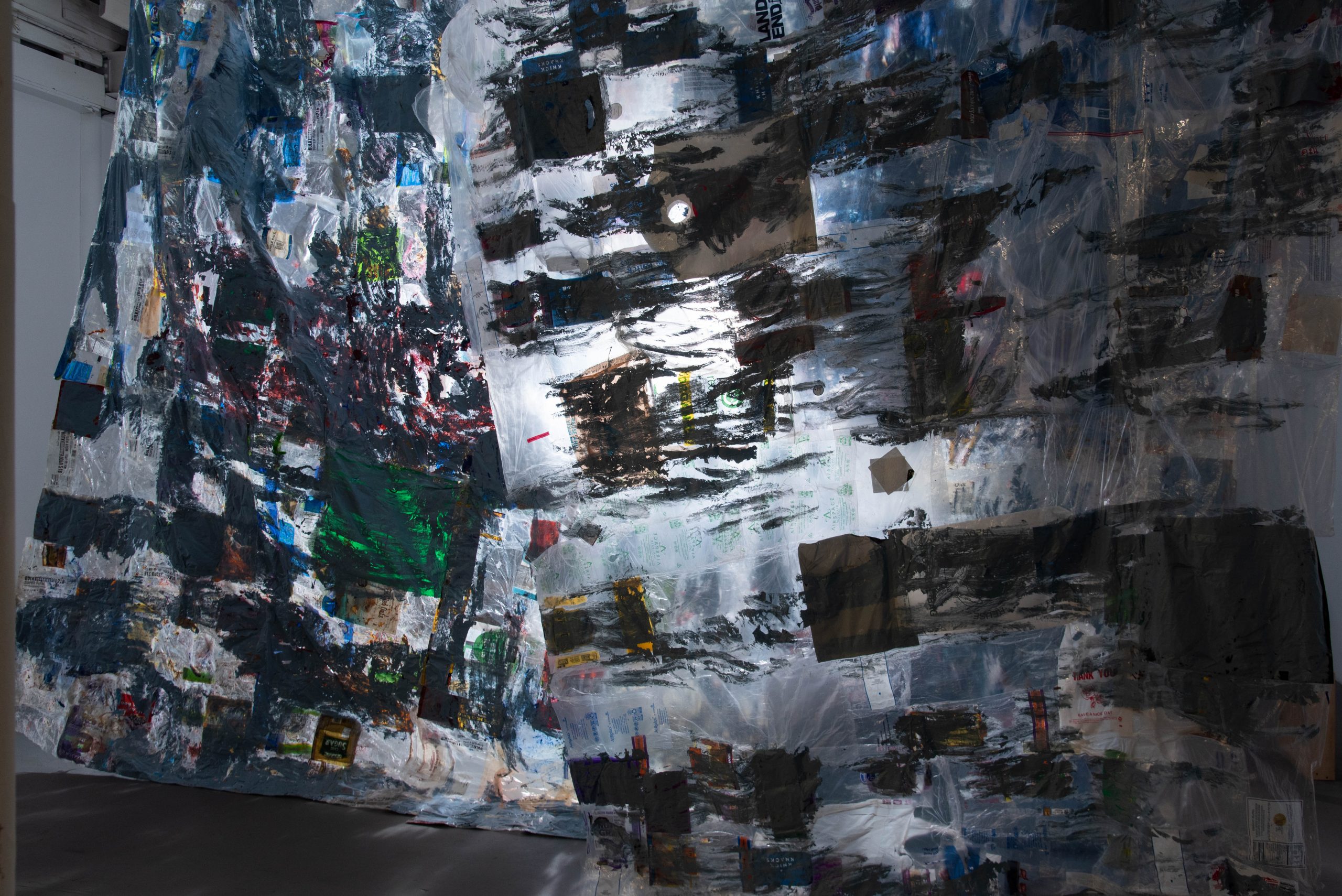 In a 1997 interview between Black feminist author bell hooks and trailblazing female rapper Lil’ Kim, hooks asks Kim “What’s love got to do with it?”, remarking on the apparent absence of love, of care, in the artist’s body of work. Kim answers, “I don’t have that.” hooks later wrote about the exchange in her 2000 book All About Love in which she asserts the vital, life-affirming importance of love for all Black women and femmes. In the lyrics for “I Know You See Me” on Kim’s 2005 album The Naked Truth, she asks “Can you see me now? Am I clear to you?”

Now ask, who do you see?

How you see yourself, how the world sees you, how those two views impossibly, improbably, and unavoidably coalesce stand at the heart of our scene. Think about what it means to be the only person in a room who looks like you, to carry the unspoken assumption that you speak for all Black women, when other days you’re unsure if anyone can hear you at all. Think about the hyperreality of life when you’re Black in the world, visibility and invisibility exist within a closed circuit. Think about what it means to ask “is anyone there?” and not sure if you’ll receive a response. This is the importance of educator, maker, and curator’s Andrea Yarbrough creative placemaking initiative, in c/o: Black women. Yarbrough was moved to create in c/o when they were confronted by the structural inadequacies Black women sculptors, wood workers, and other makers faced when hoping to find and build community. The idea of community, the idea of a response, of finding, making, and building space for oneself is the crux of the exhibition, in c/o: practice, currently showing at The Luminary in Saint Louis. Curated by Yarbrough and featuring the work of Adero Knott, Racha Tahani Lawler Queen, Nia-Amina Minor, and Dr. Blair Ebony Smith, alongside Yarbrough’s own work and collaborations with designer Ebere Agwuncha, the show presents modes of community engagement, institutional commitment, and artist making that are informed and invigorated by Black Feminist thought and histories.

Like Helen Oyeyemi writes in her 2014 novel Boy, Snow, Bird, “Nobody ever warned me about mirrors [. . .] and I believed them to be trustworthy.” There’s a desire in fairy tales to have a beginning, middle, and end. Think of Kim’s legacy, think of Aaliyah’s and how she sang, we need a resolution. But, no one ever asks the girl, the woman, the lady in the mirror what she wants, what she’s looking for, what she needs. It’s Snow White, American made, Little Red Riding Hood left with the Wolf in the back of the tour bus, Cinderella on the mad doctor’s table again, and again, and again, in this world full of evil step sisters and princes not so charming. Don’t get trapped by an ending. This story is not linear. Maybe there’s a sleight of hand, the heart not the heart, but rather a possibility of something else, something new. Where can she find herself, find other women who also know those twin languages of exhilaration and despair, those ruptures and breaks, those hearts not hearts? What can a resolution look like?

Edmonia Lewis, the first professional, Black woman sculptor wrote, “there is nothing so beautiful as the free forest.” Futurity is the study of afterlives, reverberations, it’s the echoes of endings and the possibility of new beginnings. A curl that circles infinity.

One of in c/o’s earliest endeavors, which continues to this day, is the restoration of Chicago’s almost twenty-thousand vacant lots, many of which are located on the city’s South Side. in c/o’s collective practice merges land cultivation, personal and communal archival documentation, functional design and making, and the curation and stewardship of public events. Their mission is to build spaces and systems that center not just equity, but step toward justice; care both potential and actualized. In collaboration with the #LetUsBreathe Collective, in c/o stewards the ongoing, living oral history archive tending to, in which Black women speak to their own relationships with the idea and exercise of care.

The question of care contains multitudes; what it means, who has it, who needs it, what it looks like, what it feels like, where it lives, where it can live. in c/o is committed to the schema of care as work, the work of care for all Black women and Black communities, as care is love, it is safety, it is the knowledge of being seen and heard. in c/o asks what would it look like for care not to be a buzzword, or a topic meaninglessly thrown into bestselling books that are practically HR manuals for whiteness. c/o answers the question by locating care within its rightful home, the community. Care is hard, care is work, care is accountability, it is the rectification of wrongs, the confrontation of shame, guilt, and dirt, it’s both the hammer and the hand entangled in your own. To care is to survive, to thrive, to love one another at the most fundamental level; you are here, you are human, you are home. Coming off in c/o’s open letter to the Architecture Biennial which spoke to the structural barriers the Collective encountered before leaving this year’s Biennial programming, they determined that examination of institutional care (or lack thereof) is of the utmost importance and urgency. Institutional care is not simply inclusion. Rather it is the work of making space, of listening, and committing to equitable change through time, political action, and material resources.

This inquiry of care made manifest, is the focus of in c/o: practice. In the exhibition’s press release, Yarbrough quotes the Combahee River Collective’s 1977 political statement that states, “We realize that the only people who care enough about [Black women] to work consistently for our liberation are [Black women]. Our politics evolve from a healthy love for ourselves, our sisters, and our community which allows us to continue to struggle and work.” Love, then, is the message but perhaps death is not written in the stars.

It’s not a resolution, but rather something old, something new, something found that’s been long denied.

Love is the motivation, what spurs right action front and center, what makes care visible to the naked eye. In c/o: practice is a zone, mapmaking in progress, a shifting landscape, made by and for Black women makers that present celebration alongside struggle. Like the sound of young Black girls laughing and playing in Smith’s (2021) audio piece Do It Again…And Just Do It Again Until You Can’t Do It No’ Mo’, freedom can be joyful, care the most fundamental triumph. When we talk about joy, it’s difficult and unethical to disregard the breaks, the jumps, the discontinuities, the violence, the contradiction in form of life born of and in rupture, that constitutes ideas of Blackness in the American mind. Yet, to not center trauma, to reclaim grief’s share, does not equate to a diminishment or dismissal of history and hardship. Rather, it’s an acknowledgment, a reclamation, a way to move with and, maybe, through pain. It’s a way to see the forest standing free. The heart that is not a heart, but rather an escape hatch, a new language, a possibility, a future yet unwritten.

Julie Dash’s 1991 film Daughters of the Dust, is the story of Black womanhood and family, how within diaspora myth and reality merge with gossamer threads; they sit side by side while one mirrors the other. They are the stories that tell the possibility of ascension, blueprints for transcendence. The revelations of life that eclipses confinement, the uprisings of life. Dash centers the film on the women of the Peazant family who live on the site of the Ibo Landing on St. Simons Island, off the coast of Georgia. Flight is both metaphor and reality here, as one character states prior to the family’s own journey north during the Great Migration, “We left our markers in the soil, in memory of the families who once lived here. We were the children of those who chose to survive.” Flight is life, it is a precursor to death too, but when the ground line blurs and the wind washes your face there is a joy more intricate and complex than anything down below. It is yours and yours alone. In Nia Amina Minor’s 2021 video piece, Without Ever Leaving the Ground (She Flew), three figures appear center frame wearing zero waste costumes against a set composed of single-use plastics and textiles. Designed by Janelle Abbott, the costumes and set panel uncannily resemble clouds. These clouds that are not clouds, this heart that is not the heart. With dance performed by Akoiya Harris, Michele Dooley, and Nia-Amina Minor, She Flew tells the story of the Black woman’s body, of the Black femme’s body, in all its potential and dreams. It is a piece that choreographs promise and possibility, where flight lives within the conscious and unconsciousness, a mapping of known and unknown psychic terrain. Yet, for the piece’s view of the sky, it is also firmly engaged with the work of building a better world through the body’s connection to the land and its history. It’s that conundrum, that study in contradiction, being the first to come to the planet’s aid while in the center of the country’s necropolitical crosshairs.

The heart of the thing: there’s no resolution, no roll credits, no final curtain. Resolution denotes an ending, that present wrapped up in a bow, the closing of the book. This is not a fairy tale. However, that doesn’t mean the fantastic, the magical, the beauty of the everyday, doesn’t live, breathe, and find life in this space. It’s a celebration made by and for Black women, it’s the feeling of someone answering your call. It’s the deep seated truth that ghosts can also be ancestors. The discovery of another walking through that same free forest. This is the importance, the necessity of in c/o’s mission, it is Black feminism in action; it cannot be contained to a page, theorized in a dissertation, spoken round, as it is the stuff of life: everyday lived experience. These words too are but a shadow of a shadow, an echo, a feeling, a whistle past that infinite curl in describing the importance of in c/o: practice’s work, its artists, its makers.

in c/o: practice is up at the Luminary through November 13th, 2021. Please visit the Luminary’s site for information on hours and visiting procedures.

Annette LePique is an arts educator and writer. Her research interests include the body, race, illness, gender, and trauma. She has written for Spectator Film Journal, Fashion x Film, Cleo Film Journal, Another Gaze Feminist Film Journal, Certified Forgotten, and Dilettante Army. She has a background in dance and music.