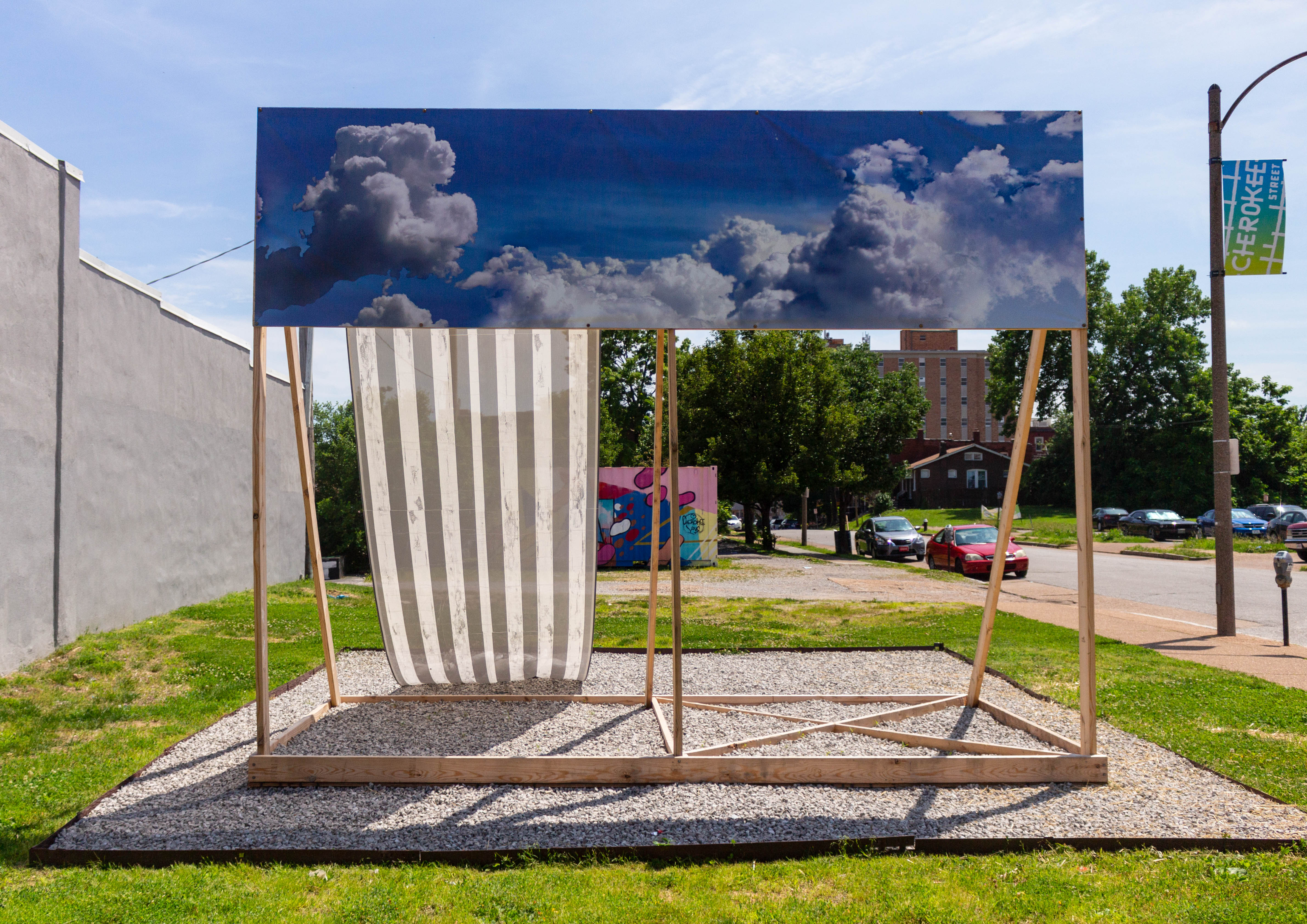 In an era hypersaturated with recurring exhibitions – from Shanghai to Sharjah, Havana to Venice – a new St. Louis triennial urges artgoers to forgo the touristic water taxis for their own two feet. Organized by The Luminary, a St. Louis-based nonprofit platform for art and activism, Counterpublic reinvigorates global precedents with a model that approaches the city on the scale of a neighborhood. Its inaugural iteration takes place in the 12-block radius of Cherokee Street, a neighborhood of family-operated businesses and art spaces that serves as the Latinx center of St. Louis. Any of the 30+ site-responsive installations and performances greet equal parts neighbors carrying grocery bags and cognoscenti clutching the newspapers that serve as maps to make the pilgrimage. Artworks are ingrained in punk clubs and panaderías, indicated subtly by small yellow signs.

The exhibition evolves at various levels of sunlight and sobriety – it features a John Riepenhoff-created beer at Earthworks brewery –as Counterpublic’s hours are set by the shops themselves. On the street, none of the artwork is particularly protected; this vulnerability speaks to the authentic reciprocity of the community element embedded in the exhibition. What’s different about this blend of art and life is that it eschews the gentrifying “bring art to the community” complex. Counterpublic does not activate this neighborhood; rather, it proves how active it already is. Its artworks punctuate the lifeblood of bakeries and family-owned businesses to encourage viewers to spend time with spots they may see on a daily basis without ever looking at.

A former church turned music venue/gathering space, Treffpunkt/Fellowship houses the exhibition’s showstopper, Cauleen Smith’s Sky Will Learn Sky. Smith appliqués text from Alice Coltrane compositions onto orange tarps that hang like industrial prayer flags. In the celestial space her translucent banners echo the adjacent stained glass, creating a call to action more poetic than pious. The hand sewn quality of her installation implicates the labor of the hands that made the banners that beckon visitors. Sightseers and residents will have different relations in the space, as some enter for the first time, while others recall funerals. The multiplicity of meanings that the church takes on parallels the spaces featured in Smith’s film Sojourner, which plays in the church’s basement. The film, with themes of soul music, urban sprawl, inhabitance, and abandonment, draws links between St. Louis and Smith’s native Philadelphia. These vignettes read like a family album, and the folding chairs from which viewers watch the film act as pews from the service of a backyard barbeque.

Like Sky Will Learn Sky, many of the works in the exhibition utilize text, which seems the most natural way to legibly embed artworks into the public sphere. Applied from the interior windows of Foam, a local bar and music venue, Demian DinéYazhi’’s falling is not falling but offering offers letterpressed phases – including “Mound City,” “Occupation,” and “White Flight”  – from indigenous heroes on colorful papers. While the reminder of indigenous displacement could contextualize Cherokee Street in an important light, these phrases dissipate into the decorative. Their uneven repetition does not increase the volume of their message but rather creates a cacophonous triviality to their placement that does not consciously engage with the bar window, except by creating an interior devoid of natural light, which daytime patrons often complain. Other interventions in the neighborhood, like Kimi Hanauer’s Free from To With For, more successfully present a poetic occupation of urban space, including the text “To those who carry traditions of exile, the weight of survival, the audacity to still be tender.” She wheatpastes explorations of race-based exclusion with potent visual abstractions to brick walls on city streets.

Joseph del Pesco and Jon Rubin’s Monuments, Ruins and Forgetting transforms a vacant storefront with shifting signage that announces a series of “museums” that unfold over the course of the exhibition’s three month run. In bold, black, and yellow text, the cyclical artwork transforms the building into the Museum of Monuments, the Museum of Ruins, and the eventual Museum of Forgetting. The work spills onto the street in posters that declare the “coming soon!” of its next chimeric phase. Curious viewers peek through butcher paper curtains to find the interior vacant. Today, there are more museums in the United States than Starbucks and McDonalds combined. Their intervention casts the museum as an empty vehicle to connect national exceptionalism to local histories in a gesture that questions the privileging of certain narratives and memories over others. On an architectural and institutional scale, del Pesco and Rubin’s evolving narrative of celebration, desecration, and neglect articulates the same phenomena that are occurring on an individual, civic scale. Next door, local tea house Tea Rex hosts a going out of business sale. A tattered missing persons sign hangs on one of the unwashed windows. The signposts of these real histories parallel the conceptual questions that the parafictional work asks, marking the piece both poignant and proleptic.

The exhibition involves collaborations with many of those who live and work on Cherokee Street, including its most transient residents: the birds. Outside of the Cherokee Street Buddhist Temple, OOIEE (Office of Interior Establishing Exterior) has cast a pair of iconic Donald Judd corner chairs out of birdseed. Flanking the entrance, the chairs will wither away over the course of the exhibition, transmuting from adornment to energy. Smart and site-responsive, this cyclical return to nature materially reflect the Buddhist ideas of the interior space of worship. But the birds are not the only consumers in the triennial.

Whether we like it or not, we live in a capitalist system, and instead of presenting utopian alternatives, Counterpublic leverages this opportunity to encourage visitors to patron local businesses, or at the least, converse with their employees. In collaboration with the popular Diana’s Bakery, Rodolfo Marron III created galletas, or Mexican cookies, that read “Aquí Estamos – Estamos Aquí” (Here We Are – We Are Here). All proceeds from this simple yet formidable gesture benefit the grassroots organization Latinos en Axión to support Latinx communities. To be honest, the churros are better, but relations produced are powerful; years later, no one seems to care how Tiravanija’s soup tasted.

Not all of the pieces are as explicit; some artworks linger inconspicuously on shop shelves. Yowshien Kuo’s new body of work, sourced and displayed at Carrillo Western Wear, rests coyly among other articles of clothing for purchase. One of his hand-painted shirts, inspired by bullfighting as a display of masculine performativity, reads “IMAGINE YOURSELF IN THE PLACE OF AN ANIMAL.” Spiked, painted cowboy hats queer the space as camp cultural signifiers of American masculinity. To see viewers try these on only to find out they are artworks is rewarding. However, not all of the exhibition’s subtlety is as successful. In paltry pieces of paper, Tomas Kong’s collages cryptic cutouts onto the shelves of Economic Shop in his work titled Be Happy, which ends up lost behind cans of Doña María’s mole. Whether or not they are aware, shoppers take home plastic bags hand-decorated by the artist that may end up unwittingly recycled.

Weekly happenings animate the exhibition, from performances and screenings by Chloë Bass and Isabel Lewis, to harangues of local officials, like “Complain to an Alderperson.” Matt Joynt, Josh Rios, and Anthony Romero fashion a newly commissioned mobile sound monument, Not Peaceable and Quiet. In the wake of two ridesharing companies pulling out of St. Louis, these artists repurpose an Ofo ridesharing bike with colored duct tape to create a piñata soundsystem, whose trailing speaker plays cumbia music. Resisting the legacies of over-policing communities of color specifically through noise ordinances, the artists invite participants to ride the bikes around the neighborhood. In a festive hauntology, they question the neoliberal privatization of mobility.

Counterpublic doesn’t infiltrate the neighborhood with art, but rather accentuates community gathering spaces with new ideas. I wait behind two folks looking to change a tire at Don’s Muffler Clinic in an attempt to see Sky Hopinka’s video, only to have the woman at the desk tell me she can’t find the remote to turn the television on. We instead talk about how long her shop has been in the neighborhood. In their approach to organizing the triennial, The Luminary instills a significant amount of trust in their collaborating neighbors, which gives rise to some unintended outcomes but fruitful opportunities. These conversations might be just as meaningful as the work.

Counterpublic reimagines the recurring exhibition as a platform to unite subcultures linked by affinities excluded from the dominant public. While the triennial ends July 13, its artist-commissioned street banners will hang for the next five years. José Guadalupe Garza and Miriam Ruiz’s community library will also remain in El Chico Bakery, as part of their series of community interventions, Ojalá. Counterpublic will undoubtedly have other less tangible, long lasting effects as viewers return to these sites to experience the potential energy of the neighborhood’s vibrant vigor for years to come.

Featured image: Kahlil Robert Irving, MOBILE STRUCTURE; RELIEF & Memorial: (Monument Prototype for a Mass); 2019. Sculptural Installation. The structure is made up of wooden supports and with a banner of clouds going across the top, and a black and white striped banner going down the backside. Photo by Shabez Jamal.

Jack Radley is an artist, writer, and curator. His writings have appeared in Berlin Art Link, Boston Art Review, Northwestern Art Review, and Temporary Art Review, among others. He lives and works in St. Louis.