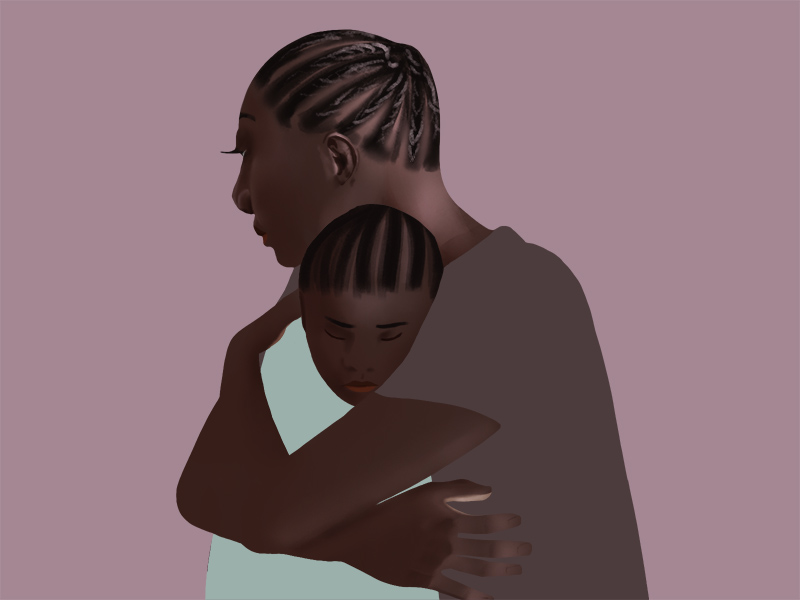 For this testimony, we hear from Tracy Drake, a formerly Chicago-based archivist who is now at the Reed College Library in Portland, Oregon. She is also one of the founding members of The Blackivists, a collective of Black archivists doing memory work with and for Black communities. Throughout her career, Tracy has strived to provide equitable access to the stories of the Black experience and makes it her priority to confront difficult topics in the collective historical record while encouraging community archival practice. I was fortunate enough to see her caretaking in action a few years back while researching within the Vivian G. Harsh Research Collection at the Woodson Regional Library.

This is her testimony on Black motherhood, a companion piece to a writing called “A Rant from a Nerdy Black Girl” by Korra, a.k.a. ZP, which focuses on Black girlhood. This piece has been lightly edited for clarity.

A little over a month ago, I was accosted, racially profiled, and made to feel unwelcome on the very campus where I work. It was disturbing, to say the least—especially during a time when there is a spotlight on the overpolicing of Black bodies since the murder of George Floyd and countless others. I am angry and disappointed at a country that refuses to acknowledge the past and confront the systemic and institutional racism that has existed for hundreds of years. I am upset that so-called liberal, white institutions and individuals have completely absolved themselves of the harmful policies, values, and traditions that exclude Black, Brown and LGBTQ+ folks.

Mostly, I am upset that my child was there.

At 11 years old, she experienced the ugliest part of this country; a problem so insidious that it has left many Black artists, writers, and creators disillusioned with America to the point that they’ve simply left the country.  Black mothers, or anyone caring for Black children, have never been afforded the opportunity to fully protect our children. Black children’s lives have often been subject to white people’s inability to recognize their youthfulness and humanity. I think back to the brutal institution of slavery by which enslaved women would see their children taken and sold away at any time. I think back to my grandmothers’ fear of raising children in the South because if children merely say the wrong thing or use the wrong tone of voice, they could be killed. I am also thinking about a growing list of names of Black people killed by police.

A few weeks after my encounter with the campus security officer, I was summoned to campus to officially discuss details about the incident. I use the term “incident” to describe what happened because that is the language adopted by academic institutions. However, I feel that word doesn’t even adequately describe my fear around what happened. I’m still  processing my feelings about the harmfulness of the situation. I’m hurt. I’m not okay and I can’t mince words about that. As I walked through the vast green spaces, I struggled to breathe and could physically feel my anxiety level rising. The impact from that encounter was traumatic, heavy, fear-inducing, and painful.

Following the incident, my daughter had a hard time sleeping. So, at 3am, we would find ourselves laying in my bed discussing her anger surrounding the incident and the community safety officers’ inability to recognize her youthfulness. In these conversations we also discussed her fear of being tall for her age and being mistaken as an adult by some overzealous police or security officer. At only 11 years old, she is 5 feet 9 inches tall. She is graceful, kind, and beautiful. In this moment, she explained her fears about what happened to Tamir Rice because he was also tall for his age. I assured her that I would protect her and she quickly reminded me that I couldn’t. She was absolutely right. It was gut-wrenching to hear her say it aloud. Those words still haunt me. We cried that morning and it was what Oprah has called “ugly tears.”

When it was all over and we had cleaned our faces, she let me know that her dream of being a medical researcher like Alice Ball had changed. She now wants to be a doctor to save as many victims of police shootings as possible.

However, I am hopeful the Movement for Black Lives and calls to defund police will bring about radical change in policing encounters with Black and Brown people. We need to divest from policing and invest in Black and Brown people and communities. We can no longer support institutions that cause harm and stand in direct opposition to justice and liberation for us all.

This is the burden and the curse of Black motherhood.

Featured Image: A digital illustration by Kiki Dupont that shows two figures embracing, a mother and child, against a solid dark rose background. The mother figure faces away from the viewer as the child presses into the mother’s chest, eyes closed and facing the viewer.