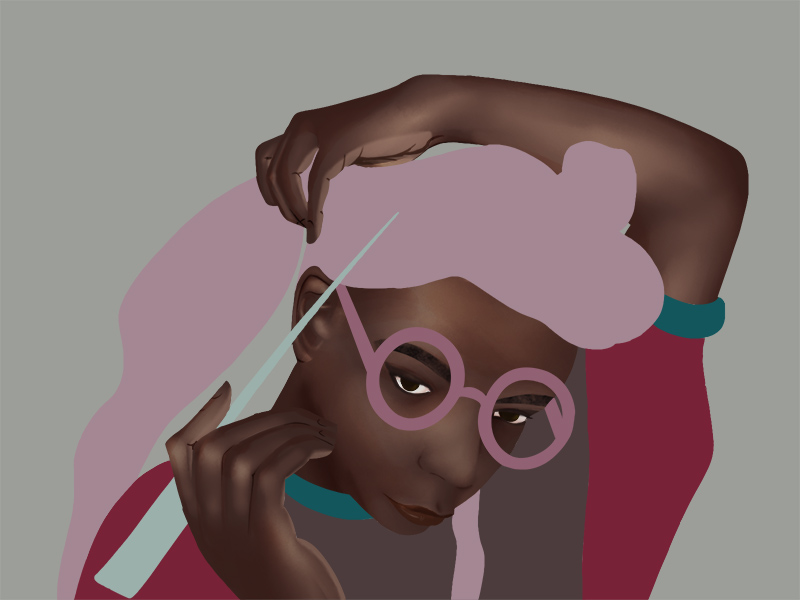 For this testimony, we hear from Korra, a.k.a. ZP, who speaks about some of her biggest concerns as a Black girl in the world, including what it’s like navigating 6th grade and the wonderful world of wash day for Black people.

This is her testimony on Black girlhood, called “A Rant from a Nerdy Black Girl,” a companion piece to a writing by Tracy Drake on Black motherhood. This piece has been lightly edited for clarity.

I have so much on my mind—everything from being Black in America, to Miss Rona, (I’m assuming Coronavirus is a she) to just being in 6th grade. Being a Black Girl is what I’ve decided as my topic because nobody really discusses or writes about our experience better than us. I’ll talk about everything from the struggles to the joys, the lows and the highs—you name it. Just sit back, relax and enjoy my rant.

When having a proper Black Girl rant, hair has to be in the mix. Let me just say that wash day is brutal for us—Black Girls and Women. A wash day includes washing, deep conditioning, detangling, and styling our hair. We have to do all of that with curly and kinky hair textures! I’m just saying, that kind of labor should be illegal.

But there is a plus side to all of it. If we use a protective style like box braids, mini twists, or cornrows, we don’t have to deal with our hair for at least a couple of weeks, unlike people with other hair textures such as straight and wavy hair. Even though a lot of work goes into doing my hair, it turns out nice in the end (sometimes).

The next thing that I will be complaining about is school.

School for Black Girls in today’s world sucks. Sometimes I am just speechless at the audacity of some of these white people. It’s just appalling to me. I will never forget when my white teacher touched my hair—the day after I got it done! It was tragic, tragic I tell you! The worst part of all was that I didn’t stand up for myself and it happened again.

So, this is my advice for any Black Girl who runs into these kinds of situations: speak up for yourself. The person will likely understand. These situations are annoying and uncomfortable.

Other situations like racist remarks, N-word bombs from non-black people, and no representation at all for Black Girls are unsettling and should also be addressed. Situations like this make it harder for me to concentrate because I think about them constantly—like me thinking of the Karen who touched my hair on my way to class.

This time I’m going to be complaining about the lack of acknowledgement for Black Women and Girls. We do so much for this world. We start movements, make cures for diseases, take people to the moon, and we change the conversations in classrooms. We do all of this and still don’t get the recognition we deserve. People are so blinded by ignorance, racism, and sexism that it is hard to accept the fact that Black Women and Girls are the reason America won the space race, why Black people can sit in the front of the bus, and why most Tik Tok dances exist.

Not only do people not acknowledge us, they treat us like we are invisible. It frustrates me to know that some people find it difficult to believe that Black Women and Girls have done so many amazing things. Some Black Women like Alice Ball and Mary Bowser have gotten the recognition they deserve only after their death. However, this is just the start to giving Black Women and Girls the credit they deserve.

Sadly, this is the end of my rant. This essay has made me reflect on the struggles Black Girls have to face daily. And I hope that this essay helps other Black Girls know that they are not alone. We are smart, powerful, and beautiful—and we are the movers and shakers that keep the world moving.

Plus, our hair defies gravity.

Featured Image: An illustration by Kiki Dupont of a single figure, looking directly at the viewer as if they are looking in a mirror, with one hand in their hair, and the other holding the straight end of a comb as if they are about to make a part in their hair. They are standing against a muted seafoam green background.