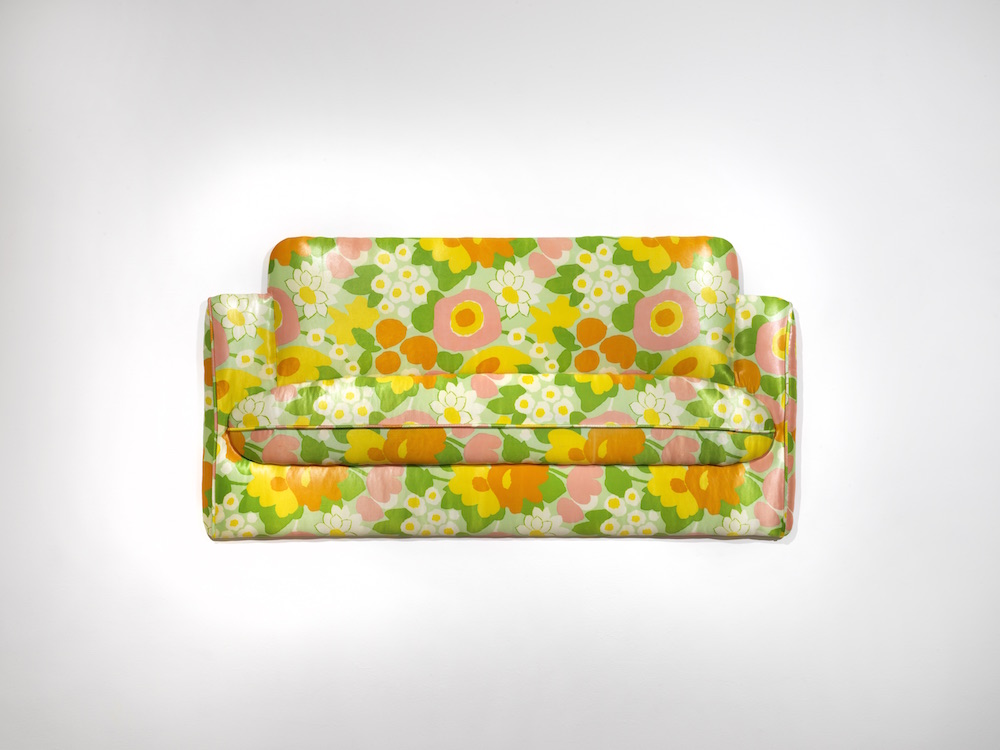 It’s always been interesting, walking into Heaven Gallery and browsing the vintage shop connected to the space on the right hand side. Gold brooches, gaudy necklaces, and fur hats line the wall as the gallery’s cat wanders in to sprawl out on the floor. It’s a gallery I’ve frequented for the past five years. It’s comforting, it’s familiar. It’s no surprise then that two Chicago artists, Nico Gardner and Lauren Carter, decided to respond to Heaven’s unique space and the clothes that fill the empty areas. Nico and Lauren simultaneously nod their heads at the tables filled with the contents from your grandmother’s jewelry box, creating their own reimagining of these pieces through their artwork. Memory, nostalgia, and identity are influential in the collection of pieces inhabiting the gallery. When entering the room, visitors are greeted with a piece entitled Keepsake: two tiny, sculptural, found containers in the shape of rabbits resting on a wall shelf. Lauren adds in hair and nail clippings into her work as a reminder that these objects carry some weight—a human’s contact, a person’s belongings. Lauren describes her work in the exhibition as being “amalgamations of collectable objects that I find in thrift stores, combined with personal items that I’ve saved over the years for some reason or other. I assign meaning and sentimental value to just about everything, and I’ve been a collector of sorts for as long as I can remember.” Around the remainder of the space, we see more evidence of found pieces, many of which look as if they have been picked from the tables of Heaven’s shop. Brooches glisten and the details are profound, making it easy to get lost in the work. In her piece Crown Jewels, fake fruit, fake flowers, and various other hues, shapes, and textures invite the viewer to touch. I am personally drawn to Nico’s couches—specifically, Sit No. 2, which is an illustration of his great aunt located somewhere during some time. We can all look at this piece and smile, remembering and touching the fabric. The exhibition is so tangible; it makes you want to have a seat. Image: “Bottoms No. 1,” Nico Gardner, 2018. Cotton, spandex and buttons on wood panel. Three pants hang on the wall and are folded at the knee. Starting on the left side, they are dark blue, brown, and red. Image courtesy of the artist.

Nico tells me that he and Lauren wanted to be mindful of the exhibition space in Heaven. The link between the shop and the gallery are evident, as both artists source material from vintage stores for their work. Here, Nico has hung pants and jackets on the exhibition walls, mirroring the racks of clothing on the opposite side of the space. This collection of pants and jackets are a nod to capitalism, referencing the act of finding a pair of pants to bring home, whether they are new or worn. He explains, “If you’re at a store, you see the jackets—they’re all lined up in different colors. You end up buying the one that fits in the color that looks good on you. You take it home, try it on, and it doesn’t looks as good. You need all of them, in all the different colors. The individual jacket isn’t as fulfilling as the idea of multiples lined up in sequential tones.” In his piece Tops No. 1, Nico works on wood panel with spandex, polyester, cotton and brass snaps to create his own minimalism line of jackets. Natural in hue, the jackets match a separate piece, Bottoms No. 1, where folded pants line the wall. Image: “Tops No. 1,” Nico Gardner, 2018. Cotton, polyester, spandex and brass snaps on wood panel. Three jackets, cut in half, hang on the wall. The left jacket is dark blue, the middle jacket is red, and the right jacket is yellow. Photo by S. Nicole Lane.

Lauren says that, “Nico’s work navigates the space between a critique of capitalist society and an embrace of popular culture. On the other hand, an important part of my practice involves collecting and assigning meaning to found objects. This kind of back and forth between surface and depth, and desire and sentimentality, is employed conceptually and visually throughout the exhibition.” She also admits that the two artists are a “wacky pairing.” However, they highlight each other’s similarities as well as their differences. She goes on to explain that their attention to found objects and materials is where their collaboration began. “Over the past year, we’ve intentionally disrupted each other’s practice by choosing materials, colors, and objects for one another to explore or include in our work,” explains Lauren. Nico agrees and says, “With this particular show, we really push each other to disrupt our making processes. We went to Home Depot and picked out all these colors for ourselves, and then we traded and used each other’s colors as source inspiration.”

For both artists, collecting is important. Nico says, “I always say [my works] are objects that look like objects, but are actually objects of images.”. Sourcing images, for Nico, includes images from advertisements, magazines, and online ads. In a sense, this is an archival process, a way of collecting images that can be utilized later in his work. For Lauren, she physically collects objects. Both artists find symbolism in memory, the past, and the way it influences the present. Image: Gallery view of the exhibition where five pieces are seen. Three pairs of pants are on the left side, along with a sculpture in the center, and a couch piece on the right side. In the middle are two smaller pieces by Nico and Lauren. Courtesy of the artists.

Nico explains that, “Lauren is the maximalist and I am the minimalist. I’m really removing a lot of physical depth while Lauren is continuously adding more. Our making process couldn’t be more different. But we’re definitely looking at similar things, our colors are friends with each other.”  It’s somewhat satisfying to see the precision and organization of Nico’s work in comparison to the chaos within Lauren’s. Her sculptural works are busy yet playful, and inventive in constructing a creation from the collection of knick-knacks. We all have our tchotchkes, and Lauren has married hers together. “We are shaped in part by our experiences and our memories, so the objects we keep carry the weight of who we are, in a sense. At least I like to think so,” says Lauren. “And I think that’s why all the things in the bric-a-brac sections of thrift stores exists. These objects were so meaningful to someone at some point, that they rather hope someone else love them or find use for them instead of throwing them away.” Image: “Catch and Release,” Lauren Carter, 2018. Finger catch, two brooches, two pins, a sleeve from a fox fur coat, hydrocal, epoxy putty, wall sconce. A fur piece hangs on top of a cone shape. The fur is falling to the left side of the sculpture. It is all white except for the bottom, which is yellow and red. Courtesy of the artist.

Static Cling is honoring history as well as looking towards the future of capitalism. It’s stuff. It’s things that we buy. It’s objects. It’s the attic where you find your family’s admired treasures—lost and sometimes forgotten, but at the same time writing a book on what is beloved.

Featured Image: Sit No. 2. Nico Gardner, 2018. Polyester on wood panel. A couch shape hangs on the wall with a yellow, green, pink, and orange floral design. Courtesy of the artist.