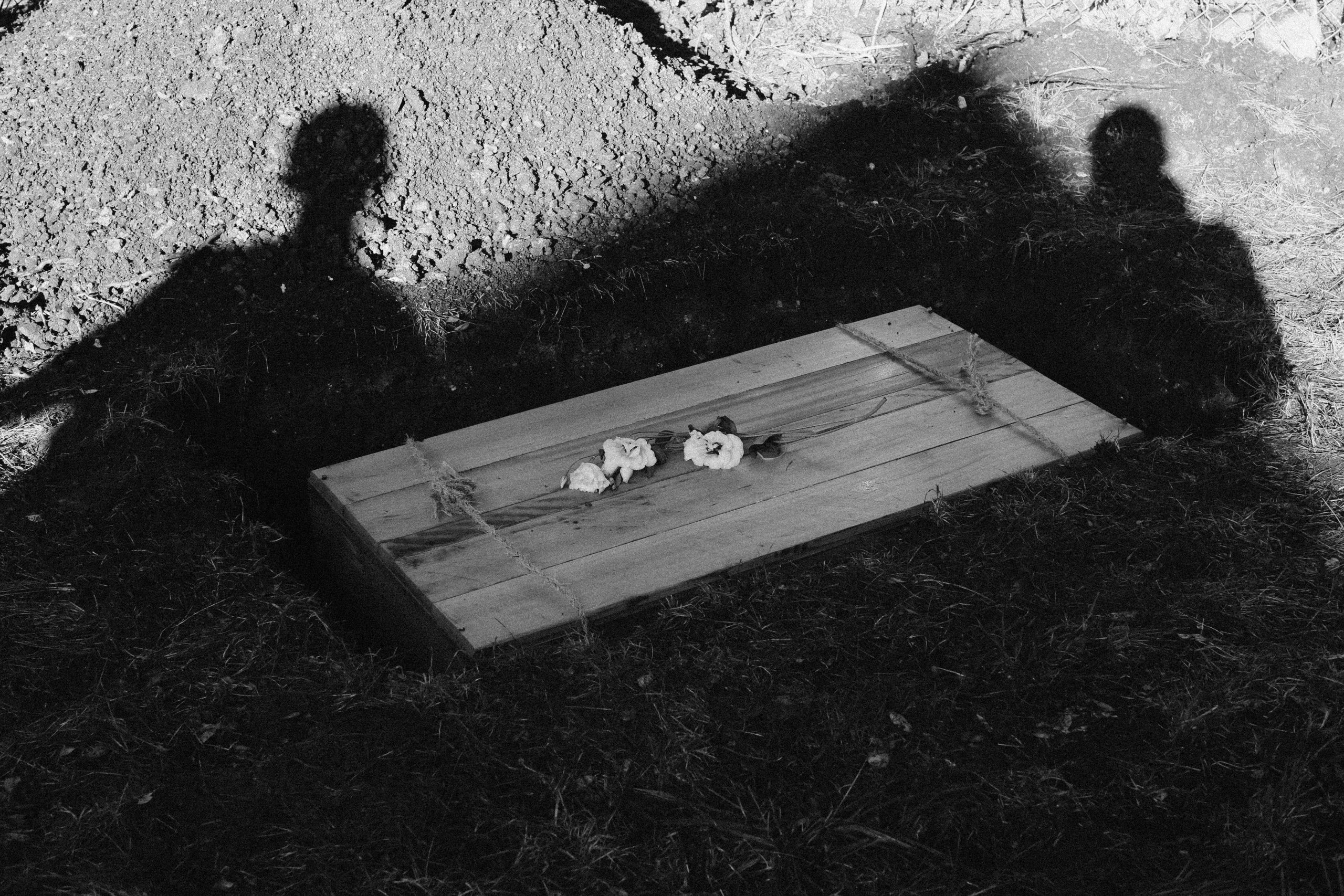 Chelsea Ross wants us to talk about death. This inevitable thing that comes for us all shouldn’t (and can’t) be avoided. Ross tells me over email, “I believe [death] can be beautiful when the shame and secrecy is removed. And it’s the one thing, other than birth, that we all have in common.” For a society obsessed with youth and living forever, death is something that will ultimately take us all—and to ignore that is to miss out on a discussion on life.

Life is made up of a series of losses. And for the artist, this grief includes the death of her mother in 2017 and her dog, Genius, in 2020. After the pandemic put her Comfort Station residency (originally planned to occur in June 2020) on pause last year, the artist reimagined what her photography should document and what her exhibition should resemble. Ross, who splits her time between California and Chicago, has transformed Comfort Station into a space dedicated to loss, grief, and transmutation.

I haven’t been to Comfort Station in well over a year and returning to the space is in fact comforting—a reminder of past events, programs, exhibitions, and markets that I’ve attended over my long-standing stint in Chicago. It’s only natural, then, to come back to the space—smelling of sage and naturally lit—and feel a sense of warmth and safety. It’s a familiar spot, located right in the middle of Logan Square, where I greet the artist and her new exhibition IT MATTERS HOW WE GO: A VESSEL FOR COLLECTIVE LOSS & GRIEF.

In the center of the room is an altar which was created in collaboration with musician and artist Jeffrey Michael Austin. The piece is a blue table with dirt scattered on the ground beneath it. There is a physical orchid on top of the table and two sets of the work, “Artists’ Grief Deck” both in Spanish and English, featuring images accompanied by text created by artist and death doula Adriene Jenik. Ross describes the exhibition as an offering and an invitation, and with the centerpiece in the room, visitors are encouraged to pick up a card, add their own memento mori (Latin for “remember that you die”), physical objects, notes, and ephemera to the altars installed on the walls and underneath the window sills, all made by Caroline Robe. Above the altars are photographs created by Ross, that are delicately pinned to the wall with vibrant colors—like the blue that matches the altars—that focus on themes of death and dying. Above one altar is an image titled, “A CIGARETTE FOR COMPANY” and features a hand holding a cigarette. On the left side are is one smaller positive image of a home (where she has lived with her partner for the last 13+ years that they are preparing to sell) and below it is the negative of a house (the house she grew up in). Images of decaying flowers, the house she grew up in, her mother’s hands, and her dog in a casket all represent the emotional presence in this space. It sits heavy in the air, making it impossible to not to think about your own mortality—especially after a year of loss.

In the piece, “THE INSANITY OF BEING ANGRY AT A DEAD WOMAN,” a hand is being pricked by a cactus in the California desert, collaged with a bleeding finger, a studio shot of a flower setting, and a black and white image of her mother. Ross discusses death by saying, “My mother battled cancer for over a decade. And even though it was very clear that her health was seriously declining over the last year of her life, she never reconciled or accepted that. Her dying was full of resistance, and pain, and suffering.”

The natural death of Genius was different for Ross. “Watching my dog die with such grace and making decisions for his death care and burial that felt loving and supportive of his and our needs, changed the way I felt about losing someone I love. While it was so sad to lose him, his death was not traumatic at all, and in many ways was very healing.” After Genius passed, Ross was able to sit with his body and “in accordance to Jewish burial traditions, we dug a hole ourselves and buried him in a plain pine box.”

Ross’ experiences and work have inspired her to look into death doula work, which she plans to begin in the fall. “The idea that we can have a good death and have some agency over our deaths and what we leave behind feels really beautiful and urgent to me, especially after this year and a half of so much, just, incomprehensible loss,” says Ross.

The culmination of the exhibition will result in a public burial ceremony for the items left at Comfort Station (visitors are encouraged to help dig the hole and refill it with Earth), along with Ross’ photographs, on the lawn outside of the gallery. Ross also invites visitors to attend a June 25th virtual yoga Nidra—or, entering a space of expanded consciousness while in an extended savasana—with Adam Grossi.

I’ve been ruminating over death since viewing the show. How can we make peace with it? How does one recover from loss? I’ve been selfishly thinking about my own life recently. As an only child, my future alone with little family looks lonely and isolated. It’s something I don’t want to ignore until it’s too late. Ross’ works tap into this sensitivity and bring out those thoughts—it’s a way to make peace with the reality that will one day arrive. It’s impossible to ignore and that’s absolutely the point. Confronting those thoughts is safe here in Comfort Station’s gallery. And Ross invites you, and everyone you know, to feel that type of safety, too.

Saturday, June 26th from 2-4 pm Ross will have a closing burial ceremony where Alyssa Martinez will read a poem.

Featured Image: The burial of Genius, Ross’ dog, in a pine box. The image is in black and white and two shadows of figures appear over the box. Three flowers rest on the box. Courtesy of the artist.

S. Nicole Lane is a visual artist and writer based on the south side. Her work can be found on Playboy, Rewire, MedTruth, O.School, and other corners of the internet, where she discusses sexual health, wellness, and the arts. She is also the associate editor of Giddy, a sexual wellness website. Follow her on Twitter. Photo by Jordan Levitt.