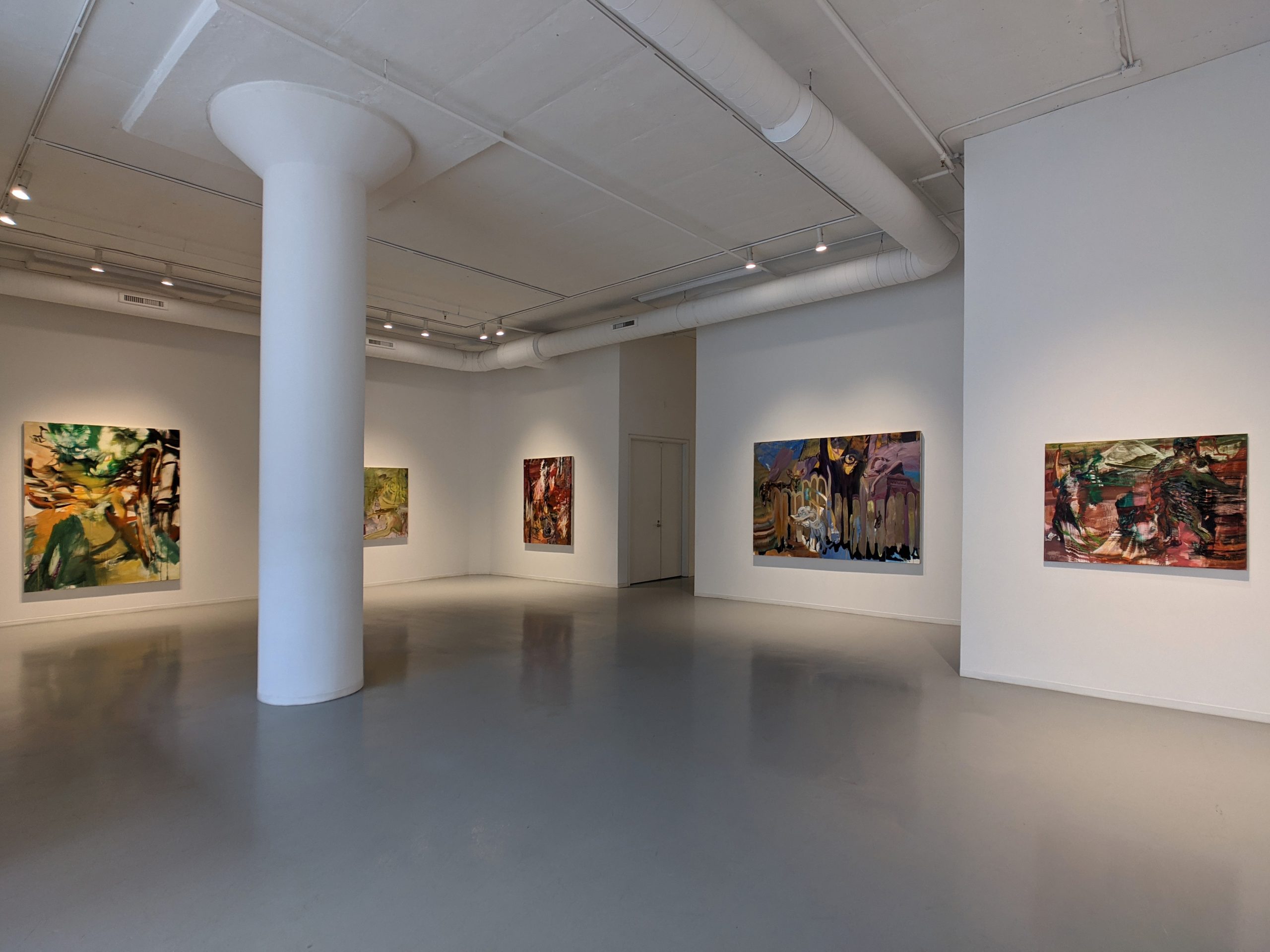 Jeane Cohen has been painting since she was young. “In my twenties I lived in a lot of places and met a lot of people, trying to figure out how the world works,” she says. “Now I have found that I can ask these questions [about the world] through painting, because it is an extremely responsive medium for learning and because [it] is unforgiving. It will rat you out when you become disinterested or guarded.” She explains that it took her a while to fully embrace painting in a way that reflects what it means to her now.

In her recent solo exhibition at Zolla/Lieberman Gallery, Cohen works with psychological themes, spiritual animals, and angels drifting in and out of focus as she examines literal abstraction as well as the abstraction of the last year. Cohen says, “In my personal life, I had a lot of things change this year. I lost some people who were very close to me and I had to build a new inner framework for how to think about what I know to be true and how to move through the world. I’m kind of always doing this, but I went really deep into it this [past] year.”

The exhibition shows a melding of two places, as Cohen splits her time between New York City and Maine. This distance collapses as she reflects on her interior self and outer world, yet a division is present in many of her works. In the diptych, The Unicorn Defends Herself (After the Unicorn Tapestries), there is a clear line of difference between two separate sections of the painting. Yet, they feel similar—connected by color, composition, and narrative. Thinking of how easily collapsible life is, Cohen’s work stitches together various scenes, feelings, and figures to create a rehabbed cohesive image. Referencing themes like skin, households, territories, boundaries, and bodies, Cohen’s paintings look at concrete structures, borders, and foundations as well as forms that dissolve or are transparent.

Cohen explains that, during her process, she moves through the painting until she finds what works. She gets to decide how cohesive or fragmented the world in the painting can be. In many of the pieces are animals and figures, representing something deeper than reality and fiction. Cohen says the figures exist more, “in terms of my experience of clarifying as I move through the world; adjusting, adapting, etc.” Some of the figures represent an interior self or a shift in a feeling or emotion. They aren’t literal, they are psychological. Cohen sees the figures as “different ways of expressing ourselves every day as we grow and as we change.”

The title of the exhibition, “In the Walls of My House There Were Spirits,” represents the spirituality of some of the figures within the paintings. Cohen sees them somewhat similar to Greek Gods “running around wreaking havoc and trying to put things in order.” The figures exist at the parameters of life, on the outskirts of reality. Many of them appear ghosty, and others are frankensteined together with other figures, creating a single character floating on the canvas, like in the piece Cat and Mouse. Featuring a cat with a mouse in its mouth, a grey angelic statue covering its face, and realistic human feet, Cohen fuses together a breathing, living human with a stoic statue.

“I think [these characters] symbolize the need for accompaniment in a deeply isolating and lonely time, but also a need for something greater, something different that maybe has a kind of outside perspective on the whole situation,” says Cohen.

Other works like Tears depict abstract shapes of animals or figures, but the viewer can’t quite make out what is there. We see the shape and recognize it’s something that lives and breathes, but we can’t indicate what it is. “I think having these animals and figures that are empathetic, [that] hold embodied emotion, or are watching [me], is a way of engaging with being seen and being comforted, while also [engaging] with the strangeness of not quite understanding, not quite relating to what’s going on around me,” says Cohen.

In the past year, Cohen says she’s been creating and making a lot. “Covid has meant that I have had a lot of time to paint, so I’ve been painting hurriedly and obsessively and pretty much every day. And that’s ideal for me, to have a span of several months and to go furiously for that period of time.” The pieces in “In the Walls of My House There Were Spirits” were created over a six-month time period over the winter during the pandemic. Cohen says she spent a lot of time alone and the winter was incredibly cold. “I work quickly so that I can stay ahead of my thoughts or get ahead of my censoring mind,” she says.

In a way, Cohen’s concept of distance through the interior and exterior worlds is relevant to her collapsing of time. The way in which she works—steadily, and keeping up with her thoughts to finish a piece—is reflected through the movement of her strokes. Her works are ethereal and otherworldly as they melt and mend, bend, and wave into cohesive pieces.

Featured Image: A gallery view of the exhibition at Zolla/Lieberman Gallery. Five large-scale paintings hang on the walls with a column on the left hand side of the composition. There is a doorway that leads to another gallery. Photo courtesy of the artist.

S. Nicole Lane is a visual artist and writer based on the south side. Her work can be found on Playboy, Rewire, MedTruth, O.School, and other corners of the internet, where she discusses sexual health, wellness, and the arts. She is also the associate editor of Giddy, a sexual wellness website. Follow her on Twitter. Photo by Jordan Levitt.