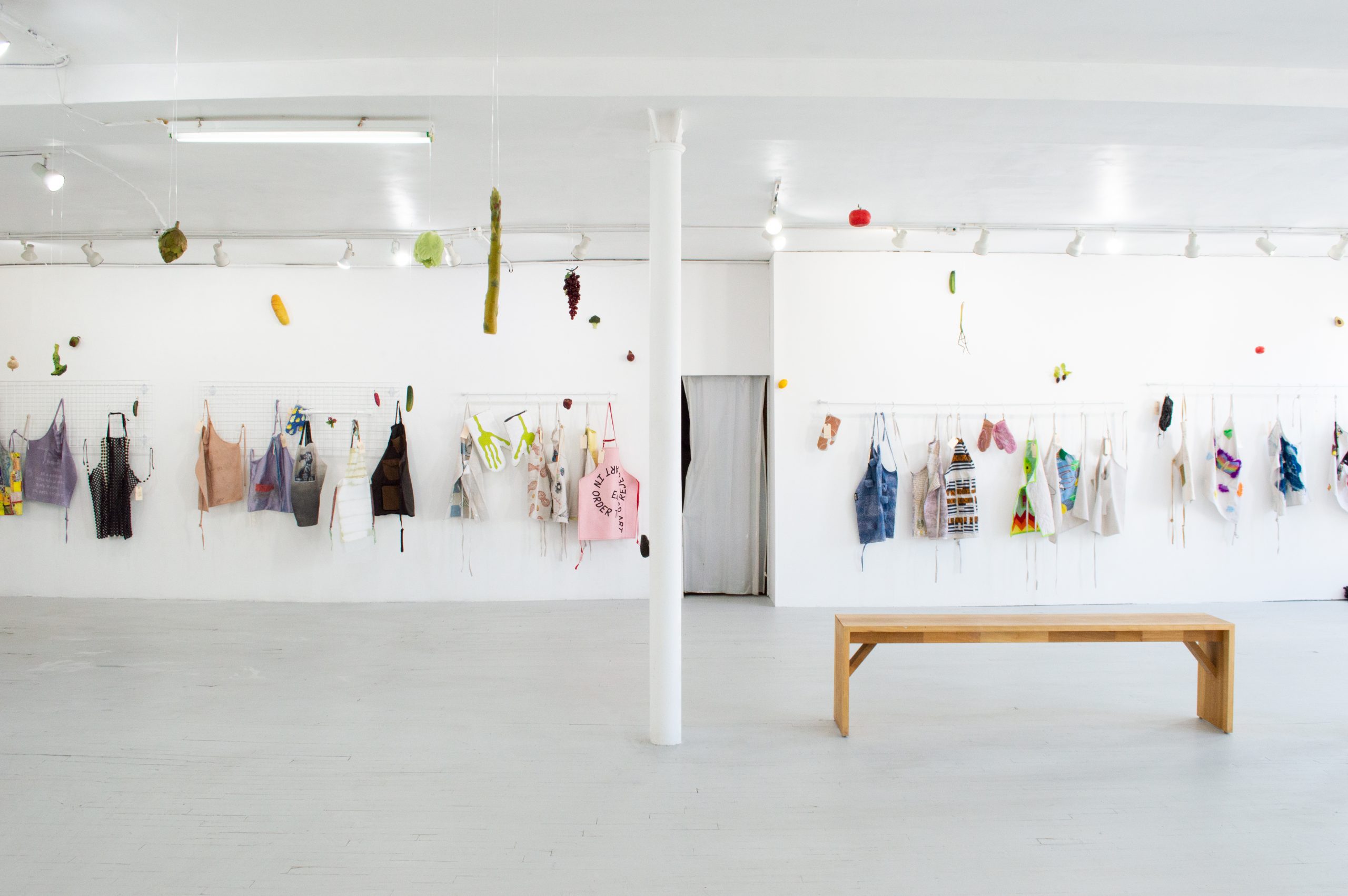 The building door opens and a soundtrack comes wafting down the stairs that sends me to a mythical childhood where I can afford an Easy-Bake oven and all the mixes. I smell frosting, I’m loved, and nothing ever burns. Entering the gallery up the stairs does not break my fantasy. The space is washed in light, it is clean, it is playful and kitschy, it is Julia Child for children. Plastic baguettes, cabbages, and tomatoes dangle from the ceiling and crawl easily over the walls in a Mrs. Piggle Wiggle moment. Through their cheerful bobbing, I can make out over fifty one-of-a-kind wearables hanging on pegboards and laced across the windows of LVL3 gallery.

This show is the fifth iteration of LtdWear, a group exhibition and fashion collection put on collaboratively by LVL3 gallery and Tusk Chicago. LtdWear is a wearables collection/exhibition where participating artists are sent a basic wearable item and invited to alter/change/remake the item for exhibition in the gallery as a retail installation. It’s a “cake in a box, but make it yours,” kind of situation. The pieces are available for sale during the duration of the show, but stay in the gallery until the end of the exhibition period. To curate the show, the director of LVL3, Vincent Uribe, as well as the shop owner of Tusk, Mary Eleanor Wallace, reached out to local artists, artists that LVL3 has featured, and artists that Tusk have relationships with–some in other cities, and some who work with a variety of materials, not just in fibers and fashion. Previous iterations of LtdWear have invited artists to reinterpret a raincoat or an umbrella (rain ware), and a bathrobe or pair of slippers (spa ware). For LtdWear5, the theme is baking (kitchen ware), with Tusk owner Mary Eleanor Wallace thinking about “the kitchen [as] the center of the home, where warmth and food is shared.” The curated selection of artists were sent aprons or oven mitts to interpret in their own style. Wallace dreams of being “at a friend’s house soon and see[ing] a LtdWear5 apron hanging in their kitchen, maybe to admire, maybe to wear.”

As I walk through the show, the 90s baby in me feels like I’m over at a rich friend’s house, keeping my hands tightly clasped behind my back even though I’m itching to try out the plastic oven in their child-size kitchen. The gallery assistant can see me squirming and invites me to take aprons down off the pegboards and try them on in front of the mirror.

Something in me loosens, and I’m reminded of Senga Nengudi’s 1969 work, “Environment for Dance,” where she installed inflatable plastic tubes around a grand piano in the Pasadena Art Museum and invited visitors to touch and freely engage with the transparent objects. Much of Nengudi’s work plays with the idea of tension, the limits of materials under use and stretch, and the social contexts in which Black people are violently pulled on and negotiate through shapeshifting.

Back in LVL3, I am feeling into some of the tensions that Nengudi has invited visitors into for decades. I can touch the objects, the aprons and oven mitts, but they are also works for sale. Most of the aprons are priced at $190. This flat pricing model allows emerging artists to receive the same monetary value as more established artists. Out of over fifty artists, I recognize the names of Chicago-based artists like Janelle Ayana Miller and Jackson Napier, students from the School of the Art Institute of Chicago, as well as people from New York I follow on the internet. This curation gently puts into question the way that the pandemic has made Instagram clout even more of a metonym for wealth-production than it already was. We all know who gets threaded into visibility and fame through the existing algorithmic racism that is Instagram-Facebook; it doesn’t take a shadow-ban to bifurcate people into palatable or disposable, archive-worthy or already-unraveled. I actually forgot to take notes on which pieces sold, so if you do go visit the show (it’s only up until the end of this weekend, June 20th, and has open hours this Sunday), do an experiment with me and let me know which works have the little red sticker marking “bought,” which works remain unpurchased, and how that matches up or not with the number of followers the artist has on Instagram. Is the space of the gallery making room for people to be affected by art without metrics?

Meanwhile, I’ve decided which work I want to try on in front of the mirror. The first piece that grabs me is a pink felt apron by Chicago-based artist Nat Pyper that gives protest-banner-energy and spells out REJECT ART IN ORDER TO EMBED ART in a big spiral of black block letters across the whole front. The work reminds me of Chicago-based artist Aram Han Sinfuentes’ “Protest Banner Lending Library,” where the artist teaches participants how to make their own visually compelling banners that proclaim slogans in stenciled block letters like PICK IT YOURSELF PENDEJO. I feel similarly commanded and compelled by Nat’s piece, even if its political commitments are less immediately legible. When I tie on the apron, it’s so long on me that I look like an upside-down ice cream cone, but in a smart, tailored way. I want it. I’m transported to an “interactive retail shopping experience” I once went to at the Whitney, where design duo Eckhaus Latta claimed to address the culture of consumerism in relation to fashion by… putting a retail store in a museum and inviting museum goers to buy bejeweled sweater vests for $3250. There were lots of mirrors there in a supposed bid for teaching the viewer about surveillance theater. It was flat. In comparison, I’ve learned more from Nat’s apron in the three minutes I’ve been able to touch it and experience it on my body than I learned from my entire hour vaguely interacting with the Eckhaus store.

REJECT ART IN ORDER TO EMBED ART sends me back into Senga Nengudi’s practice, where she reminds us in a 1995 artist statement that “an artist’s supposed greatest desire is the making of objects that will last lifetimes for posterity after all. This has never been a priority for me. My purpose is to create an experience that will vibrate with the connecting thread.” The choice to take up the apron — an object of use, a simple pattern that anyone with a sewing machine could make as a first project, an object of the “home” and of what is supposedly interior or “domestic,” an object considered feminine, an object that supports practices of nourishment, an object made to receive mess, an object for work, an object to be washed, an object to protect, an object to maintain other garments hidden below, an object made to wear, an object often given as a gift, an object to have on hand when needed — as an art object troubles the artist’s supposed greatest desire of creating something for archival permanence and opens up another site of tension. If I was to buy the apron-as-art, do I want to hang it up and maintain it to last “lifetimes for posterity”? Or am I allowed to wear it and experience it that way, to “vibrate with the connecting thread” of the piece? Does the $190 price (relatively low for a piece of art, very expensive for an apron) authorize me wearing it? And as a white person, how do I ethically engage with the racial histories embedded in aprons, where I as a white person am most often the person being served, and the other, non-white person is coerced or tortured into service?

Bigger picture questions are definitely lingering for me after witnessing the show. Some of this thinking was brought up for me after inquiring into Janelle Ayana Miller’s piece, titled “Bless the Hands that Prepare,” which is prioritizing sales for people of Black descent by the artist’s request and honors her family’s culinary practices and maternal figures.

I recognize that the theme of ‘baking’ is speaking to the ways that the pandemic forced many people into the kitchen and into certain forms of caretaking and being. I feel a bit uneasy, though, at the ways that its cheery ethos perhaps smooths over some questions around who even gets access to kitchens in these times and the circumstances that either placed people into the kitchen or kept them from being in one. This isn’t a dig at LVL3; I loved the show and know that its curation might be pointing to exactly this type of discomfort. I wonder what types of artists are still left out of such curation, such as those inside prison walls who don’t have access to a hot vaxxed summer until we burn it all down. If the apron and the oven mitt are metonyms for racialized, femininized, and classed notions of comfort, care, and nourishment, what would it look like to take these metaphors to their extremes and truly sit with the kitchen as a site of material provisioning and somatic co-regulation? If the apron is the precursor to a big hug and a full belly, what is the role of a show like this in keeping its promise? I wonder if there’s more room for galleries in Chicago to extend their offerings beyond the gallery walls and into ecosystems of care. If we can get 50 artists to make aprons and oven mitts, maybe there’s a show at an established gallery like this where we can, like Nat Pyper, REJECT ART IN ORDER TO EMBED ART into our everyday practices of support and nourishment.

Go see the show this weekend before it closes on June 20th — LVL3 posts their hours on their Instagram and is also available by appointment. The gallery was recently featured in the New York Times Style Magazine as one of “12 Galleries That Aren’t in New York or Even Los Angeles,” so it’s your chance to help gallery director Vincent Uribe “build..[art] networks that aren’t so insular.” It’s even supposed to be rainy on Sunday in Chicago, so it’s a grab-your-crush-and-think-about-art-together situation.

PS: Remember the experiment I proposed? If you go, do let me know which pieces have the little red sticker marking “bought,” which works remain unpurchased, and how that matches up or not with the number of followers the artist has on IG. Email me and we can write a follow up: rowsarkelaworks[at]gmail.com.

Featured image: Overview of LtdWear5 installed at the bright LVL3 gallery. The image is a landscape shot of about thirty colorful aprons and oven mitts displayed on racks on the far white wall of LVL3 gallery. In the midground of the shot is a long wooden bench and a white pole that cuts the gallery in half.  Hanging from the ceiling are large plastic fruits and vegetables, including asparagus, grapes, and tomatoes. On the far wall, a large plastic baguette is hung on the wall as well offering a cheery, kitschy feeling to the gallery. Photo courtesy of LVL3.

row särkelä is an organizer, artist, and white settler raised in tiwaland and living in zhigaagoong. in “fold unfold,” row addresses the seepages between fashion and social movement organizing, surfacing the work of designers and artists who shape and intervene in chicago’s vestiary landscapes. row considers taste to be a political project and investigates how design and dress unfold in relation to local forms of racial capitalism.