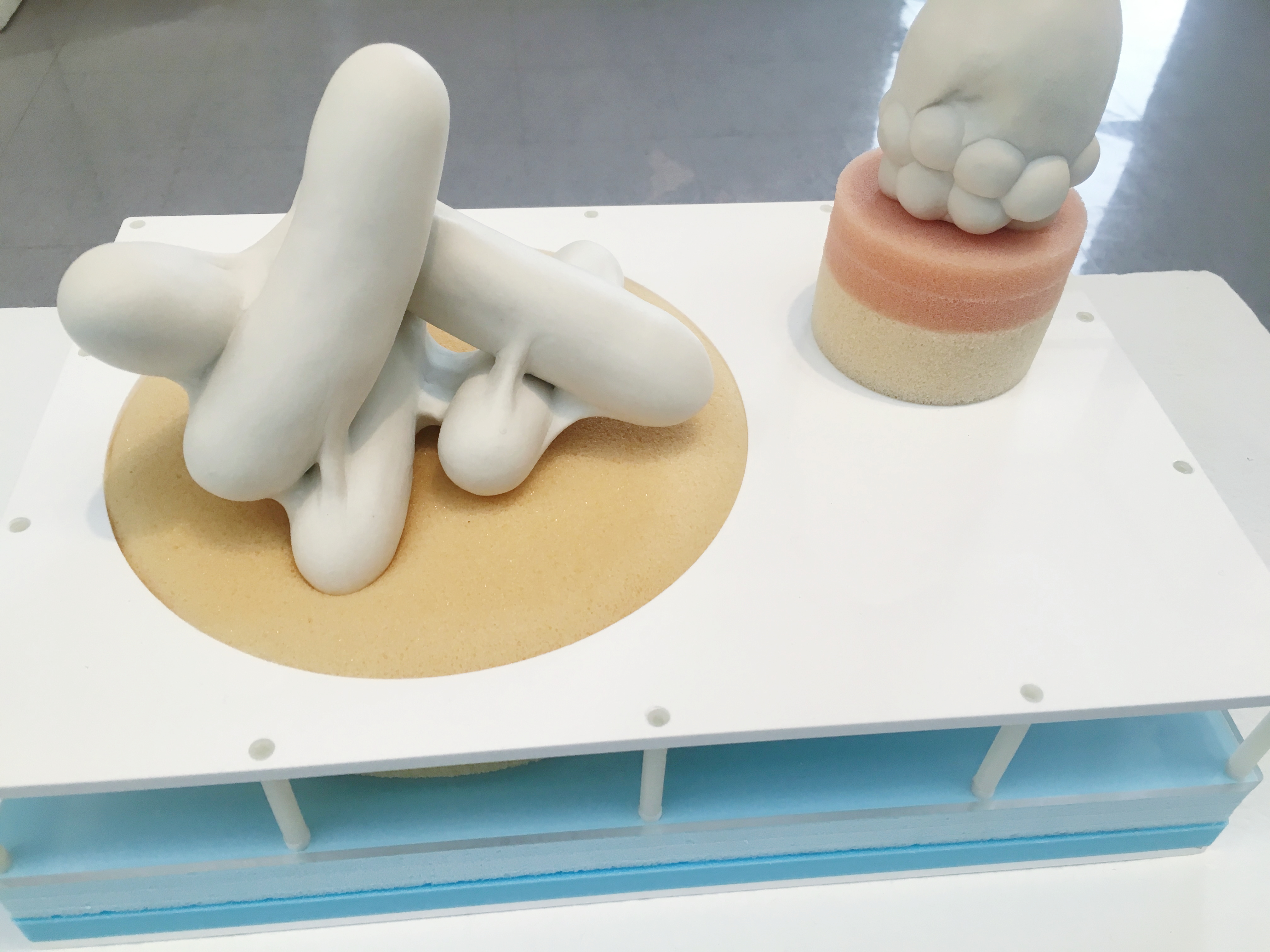 As you walk through the doors of Heuser Art Gallery at Bradley University, you’re immediately greeted by an expansive collection of fifty ceramic works contributed by twenty-two artists working and residing in the central time zone. The central time zone includes parts of Canada, North America, Mexico, and South America. Intriguing pieces engulf the gallery walls while floor pedestals parade a multitude of artistic techniques, concepts, and innovations of design in ceramics. This show is the sixth installment of the biennial juried exhibition, Central Time Ceramics. The show is juried by Gail Kendall who received her BSD from the University of Michigan, her MFA from Eastern Michigan University, and taught twenty-four years at the University of Nebraska-Lincoln.

Central Time Ceramics was founded by Randy Carlson as a bridge-way to visually illustrate the scope of contemporary ceramics spanning the central time zone. It creates a space for both novel and experienced ceramists to display their work alongside one another and to broaden our understanding of what is considered predominantly a coastal art institution scene. The intense array of color, form, and concept present at this exhibition was an immersive and breathtaking experience. The awards were first, second, and third place with an Honorable Mention that went to Joseph Madrigal’s, untitled no 4.

As you walk towards the back of the gallery, you approach a bubbling and rather curvilinear form titled The Places Where My Mind Goes by Ovidio Giberga. Giberga began working from a sculpture background and quickly became fascinated by ceramic’s rich history and tradition. Working with the thought of geometric and organic forms, his work creates a sense of struggle or duality, a concept that can oftentimes take on the role of being beautiful or aversive. Ovidio Giberga, The Places Where My Mind Goes, 2018. Photo by Haley Funk and Dylan Pashke.

Second Place was awarded to Patty Kochaver’s, Saggar Fired Box/ Kimono Print Series, which encompassed a three-dimensional disc shaped object, decorated with ornate patterns and colors. Kochaver is fond of the saggar firing method which is known for its characteristic smoked mark making on bisque ware. This series as well as her winning piece, has a certain rustic flare that I thought was done successfully. I remember walking by these and thinking, these vessels have a story, they spoke to me in their patterns, unique mark making, and color palette, which all combined to make a very strong, unified disc series. Angela Dieffenbach’s Deadly Kind received third place and has an interesting story behind it. Dieffenbach bases her sculptures on principles of science and art, an unusual, but captivating duo. She is especially fascinated by what would be considered unorthodox medical treatments and experiments, as displayed by a frog connected to a heart via metal wire. For me, this piece is a good balance of technique, concept, and execution. I’ve always been interested in the combination of the sciences and the arts, so Dieffenbach’s piece was exceptionally interesting to me. Her use of the metal wire moves your eyes between the frog and the heart while unifying the entire composition which was a brilliant use of materials and spatial depth by having two seemingly unrelated objects connected via a dynamic downward arching support. In addition to the pieces above there were two other works that caught our eye. The first piece is Just Breath by artist Ovidio Giberga from San Antonio TX. In his artist statement Giberga mentions the importance of internal and external forces in conflict, specifically when using the human form. In addition, he mentions the recurring use of clouds in his work. Stating that “clouds have been thought of as portents of the future and associated with fertility”. His excellent use of organic forms, textures and combination of forms was the reason it caught my attention. While looking at this piece, you can’t help but want to take a closer look. Secondly, Nolan Baumgartner’s, Formal Study, hangs on the walls just inside the gallery space. Its intriguing forms include a flat plane protruding from its background counterpart, complete with a vase like structure sitting on top of a shelf. The curious circular forms missing from the textured surface make for an interesting compositional element that contrasts the patterned background. Reading more about Baumgartner’s work, his purpose is to create work that can be used functionally while maintaining its aesthetic beauty. His artist statement postulates: “My sculpture confronts the gallery/museum space, as well as other odd human phenomena.” His piece is wonderfully composed of both creativity and functionality of an abstract shelf-like art. This was a personal favorite of mine. It captures your attention right as you walk into the room, as well as directs your path towards it. I just had to go investigate it as soon as I noticed it, in order to get a better glimpse at the varying color and pattern choices Baumgartner made. I’ve never seen anything quite like this. It’s creative with a functional element to it, the perfect combination of formal and informal technique. The 6th Central Time Ceramics is a testament to the unification artists can sustain while still remaining completely diversified. To witness such a broad and expansive collection of work sitting together in one gallery truly makes for an unforgettable image that will remain with its viewers for weeks to come. This exhibition will continue to contribute promotion of central time zone based artists, both experienced and new, to welcome contemporary thought and methods in ceramic making. We, as artists, have a duty to keep questioning and pushing boundaries, both methodically and conceptually, and I think what Carlson has founded with Central Time Ceramics, is doing just that.