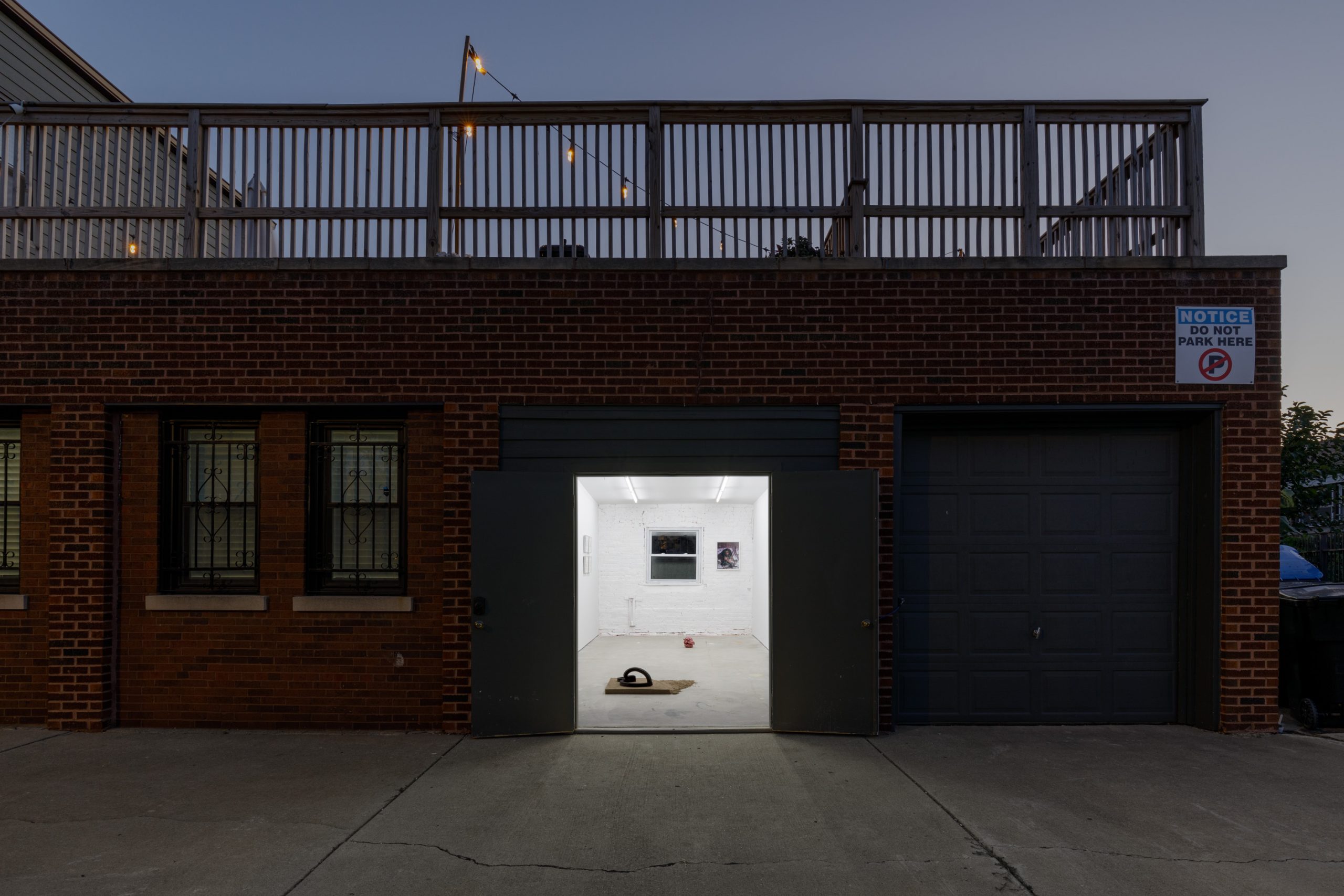 In Latin, Cito, Longe, Tarde, translates into “leave quickly, go far away, and come back slowly.” Influential medical figures Hippocrates and Galen first coined this phrase, which later influenced the public during the plague that took over Asia, Europe, and areas of Africa in the mid-1300s. Cited as the most devastating pandemic in history, the plague (also known as the Black Death), killed millions of people worldwide. The plague not only killed half of China’s population and a third of Europe, but it also brought on complete chaos within society. Panic, fear, and confusion led many folks to flee their homes and take on a more nomadic life, traveling from town to town, running from the plague before it devastated their hometown. In fact, this was the only advice medical professionals of the time offered. To flee and to not come back anytime soon. A means of running away was the option.

The eight works in the group show Cito, Longe, Tarde at Haynes, a new project space in Bridgeport, reflect on the current pandemic that has upended our lives. While not all works were made in response to COVID-19, many respond to the act of fleeing, tangibility, images on screen, and human-made borders. Jessica Cochran opened Haynes in the midst of the pandemic in a storage space in the back of her Bridgeport apartment. For over a decade, Cochran has been an arts administrator, curator, and educator in Chicago. She is currently a lecturer at the School of the Art Institute of Chicago and the senior administrator at The Renaissance Society. Opening her doors during the pandemic has mostly been about accessibility.

“For a gallery’s first opening reception you imagine wide-open doors, crowds of people, a celebratory vibe,” she says. “Instead, it was very regimented with limited timeslots and lots of hand sanitizer! And while attendance by appointment only during the run of my first show has been consistent, people are just not out seeing art like they were. And that’s okay. I know this isn’t forever, and sticking close to home is for the benefit of everyone.”

Admittedly, I haven’t visited many galleries with as much energy as I used to. However, I have been enjoying the silence when I do. As someone who usually attends openings with the prospect of reviewing a show, I am now more intentional of what shows I do choose to see in person. I also get to spend more time with the art and the curator in ways that I didn’t before. As a writer, artist, and gallery-goer, I’ve found my connections to galleries growing deeper because of these forced timeslots and appointments. I can’t just show up to a gallery anonymously anymore.

Haynes’ inaugural exhibition Cito, Longe, Tarde grew “organically and incrementally through a lot of research,” says Cochran. “I had a kind of intuition and gut feeling that drove my decision-making process—much more than some curatorially-driven shows, which feel more grounded in discreet ideas or even language.” After moving into her new home in February, the exhibition opened on October 3rd. Cochran worked to find pieces that weren’t necessarily about the pandemic, but were “adjacent frames of reference for the experience of being a body in space, or a human in the world—but in ways that really speak back to where we are right now.”

Ally Almore’s photograph, Michelle, was featured in Chicago Magazine in May when the magazine asked artists to document their time in isolation. The subject of the piece, Almore’s roommate, Michelle, is a hospitality worker who was furloughed early on in the pandemic. Almore created a camera obscura in an empty room of their apartment where she captured her roommate on the floor, with an image of the outside world reflected in. Shadows of trees remind the viewer of the early onset of the pandemic. Everyone was frozen in fear—locking ourselves inside was our only option. COVID fatigue has affected many folks, folks who now wander the streets again and visit their favorite restaurants, leading us to another shutdown in the upcoming week. But early on, months ago, leaving home was out of the question (and for many of us, it still is). And Almore’s piece touches on this moment and this fear of the outside world. Earlier the year, we all feared what a summer inside would be like—now we fear for the winter that’s encroaching upon us.

That’s why, when looking at As Far As I Could Get (10 seconds) R01F30, one feels confusion, or jealousy, towards the figure in the photograph. California-based artist John Divola’s photographic exercise features a figure running down an alley, their body slightly fuzzy due to the colorless grain in the image. Divola, who made the photograph between 1996-1997, would press the shudder and run as far as he could (as the title suggests). However, in the show and in the wake of the pandemic, it takes on a new meaning. When talking to Cochran, she explains that her thoughts on the running image have to do with the onslaught of athletes disputing over wearing masks while running. For me, the runner is escaping the pandemic, only to be locked in time and in a city unable to truly escape. My thoughts wander towards my own feelings of anxiety and restlessness. Since taking up hiking during the pandemic, I can sympathize with the runner. Escapism is rampant in all metropolitan areas as we want to run, we want to flee. However, like the ten-second time-frame in Divola’s work, we are locked within the confines of the city’s radius. Borders within borders. Frozen in time and frozen within the pandemic.

Playing on repeat in the gallery is an audio piece by Matt Hanner made on 9/11 and 9/12 in 2001 titled, NO JETS. The piece captures the silence that followed the attacks when flights were completely canceled and the sky—particularly the flight path towards Midway on the Southside of Chicago—was entirely stagnant and soundless. Only the wind is present. I think everyone remembers where they were on 9/11 and, even though I was in 5th grade, I still remember the quiet sky. Similar to 2001, most people will remember where they were when Pritzker enacted the stay-at-home order earlier this year. I went home from my office in Bronzeville and never went back. I’ve gone in periodically to collect items and do administrative work. My colleague’s coffee cups and paperwork are still scattered all over their desks. It’s an eerie display of objects and items that once had a purpose. NO JETS is a simple form of documenting what the city sounded like on a day when everyone was glued to their TVs and life afterward would never look the same. We are still currently locked inside, staring at one screen or another, either escaping our reality or doom-scrolling towards any relevant answers.

When visitors enter the gallery doors, they are greeted by New York-based artist, Alva Mooses’ piece, Sin Eje/Without Axis, as it rests pronounced on the floor. Made with ceramic volcanic glaze and sand, the work seems like it could easily blow away. However, the sturdy dark sculpture on top of the sand creates tension. A seemingly heavy object on top of such a light and fragile material.

The Mexican/American artist creates work about the arbitrary borders and boundaries that serve as a means to keep people out. During the pandemic, these essentially fictitious borders have been especially difficult to navigate. Where man has drawn a line in the sand to signify who stays in and who stays out, these borders have now been entirely closed. A few months ago, I went hiking in the Upper Peninsula, where I could see the Canadian side of Sault Sainte Marie, a Michigan town separated by St. Marys River with the city’s twin—also named Sault Sainte Marie—located on the other side of the river in Ontario. Separated by the border, I could see essential workers—mostly semi-trucks—traveling along the International Bridge. Through the mist, I could see Canadian flags blowing in the wind. It was only a hop-skip away, but with the travel restriction in place, the border was obviously closed. Although we share the same land (and some cities even share the same name), these violent global divisions, as seen on the U.S./Mexico border, contribute to very real conflicts that are entirely created by humankind. As Guillermo Gomez-Pena wrote in his poem from 1995 , “I see a whole generation / freefalling toward a borderless future.”

In Mooses’ ceramic piece, the black rounded sculpture that rests on the sand represents a globe stand. And the void within the globe stand is significant. Much of the artist’s work focuses on colonized landscapes and socio-political histories and here, the devoid globe stand references geographical memories and her own experience along the U.S./Mexico border. As the globe stand lies empty and detached from any lines, roads, oceans, or territories, we can imagine this borderless future.

The works in Haynes’ first exhibition are both hopeful and hopeless as we enter a new stage of the pandemic and a second wave of closures and quarantine. While only one piece of the work was made as a direct response to the pandemic, each piece offers quiet reflection and activates how we respond to touch and physicality in the current times, exploring how we may respond in the future.

While Cochran won’t be programming anything until the summer of 2021, it’s exciting to learn about Southside alternative spaces exhibiting artwork from around the country. “My hope is that once the pandemic is behind us, I can make some inroads here into the Bridgeport community,” Cochran explains. “I want my neighborhood to feel welcome in this gallery and I hope to endeavor on some collaborations, perhaps with other area galleries or businesses.” While many of us may want to leave quickly and go far away in a time when we feel so constrained and limited, it’s a relief to know that art is still available and for some of us, it’s located right in our backyard.

Featured Image: An outside view of the gallery, Haynes. Above the gallery doors is a balcony. To the left are two windows and to the right is another door. The open gallery doors look inside of the lit up studio. The sky is getting dark in the background. Photo by Useful Art Services.

S. Nicole Lane is a visual artist and writer based on the south side. Her work can be found on Playboy, Rewire, MedTruth, O.School, and other corners of the internet, where she discusses sexual health, wellness, and the arts. She is also an editorial associate for the Chicago Reader. Follow her on Twitter. Photo by Jordan Levitt.