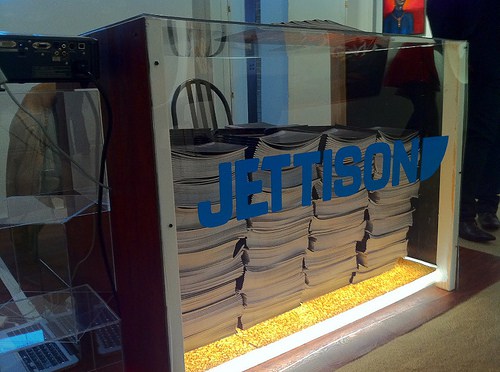 Jettison Quarterly is an online publication that features art and culture in Chicago. Like Sixty, Jettison documents and features interesting stories that are not always covered by other more ‘mainstream’ publications. In addition to that, Jettison bring to the table full-length features—because it is okay to actually spend time reading about Chicago’s rich cultural scene and not just soaking up small tidbits. We’ve been following Jettison since its inception and finally had the opportunity to put them under their own disco ball; they always display one at most of their events. PR Assistant, Meredith Weber, and Co-Founder, Emanuel Aguilar, both took a moment to talk about the publication.

Nicolette Caldwell: How long have you been a part of Jettison and what is your role? Meredith Weber: I have been the PR Assistant since Fall 2010. We joke at Jettison that I want to be referred to as the FACE, but I do take promotion of Jettison very seriously. I believe whole-heartedly in the project and people behind it.

Emanuel Aguilar: I was one of the founders along with Peter Skvara (Creative Director), Matthew Henrickson (Editor in Chief), Donald Obrien (Film and Media), and Jamie Roelofs (Fashion Editor). I currently am the Marketing Director and the head of Advertising Sales but really the five of us play a role at everything. We really couldn’t do it if the five of us weren’t staying up endless nights finishing every last thing up. We founded Jettison in 2009.

The other four founding members all knew each other from high school. They went to high school in Western Springs. Who knows what they were feeding the kids at their high school because that school they attended has produced a lot of the current movers and shakers in the young art scene in Chicago such as the Horsnwaggler boys, Caitlin Arnold of ACRE, Daniel Shea amongst many more. I met Peter at Columbia and through him the rest of the crew. It was love at first sight for all of us. 🙂

NC: What is Jettison Quarterly? How did it start?

EA: Jettison Quarterly is an art and culture magazine, based in Chicago and focusing primarily on Midwestern culture. Jettison started as an online publication in 2009. At that time digital media was the future of journalism. That mood has changed and though many in our industry are headed from print formats to digital ones we have gotten extremely high requests for a print product of JETTISON. So in 2011 we feel that print is the future and have just released our first print edition. FREE of course! Yes the business model has to be tweaked and many things have to be done differently than before but still the masses are hungry for a print publication of quality and worth.

The magazine started from the basic necessity to fill a void in Chicago. There are not many magazines covering art and culture in Chicago in depth. Yes there is Time Out and the Reader etc but they are very “listing like” coverage publications, and they do what they do well. We wanted something that people could reference back to, something that not only informed but also educated, and something you could digest slowly. Also the five of us all are from different backgrounds, film, art, art history, marketing, fashion, journalism. We felt Chicago also needed someone to push an interdisciplinary movement. It is from our experience that Chicago creative scenes are very incestuous, cliquey and unlike other places in the country, don’t often mix with each other. It’s rare to find an event where, for example, the art crowd mixes in with the music crowd or etc. So we tried to also create a product that spoke to all disciplines in order to create a more productive interdisciplinary community. If even to just include them all in one magazine. I mean really the only “competition” (and I use the term loosely because its such a different demographic) is CS. But their product has a certain audience. No one was paying attention to everyone west of the highway.

NC: What is the goal of Jettison Quarterly?

EA: Our goal is to create a quality product that showcases all the great things happening in Chicago. Something that puts the Midwest on center stage, and includes it as relevant and contributing member of the overall culture scene, nationally and globally. JETTISON means to project forward and our aesthetic and mission is very future-centric. So we’re always looking forward and trying to keep up with technology, art, music etc. We love Chicago and we want to share with everyone the great things we find exciting in this great metropolis of ours.

NC: Do you think the publication has helped add more substance to the conversation of art and culture in Chicago?

EA: I think there are many sources outside of Jettison that contribute very substantial and critical conversation points in art and culture in Chicago. Bad at Sports and New City to name a couple have great people behind them. I think we are happy to simply be included in the conversation and to be part of the colorful community this city has. NC: How do you compare or even distinguish Jettison to/from other similar publications like Time Out, New City and Chicago Magazine?

EA: I think everyone does what they do incredibly well and having said that we are certainly different than all three of those you mentioned with the simple fact that we are a magazine and only publish four times a year. Jettison works for us being a quarterly publication because we try to take a more in depth exploration on stories than would be allowed with a shorter turn around. It’s important to us that we produce content that not just informs but engages the reader. I wouldn’t compare us however because like I stated in the previous question there are multiple sources for quality coverage in the city. Jason Foumberg at New City, for example, is totally someone we admire and whom we respect. He does an amazing job. It’s just a different type of publication that we aim to produce.

NC: Where do you see Jettison heading?

EA: Now that we’re in print, I would say continuing to perfect that model and our current digital one is priority, but also more film—JETTISON TV! Perhaps a news source. Who knows? Many ideas [are] in the air.

NC: How do you select features?

EA: For the most part our content is based on things, projects, people, artists, etc that we are exposed to and that we like. We do keep our ears open to tips and suggestions from our readers however. Both Peter Skvara and I work within the art industry for contemporary art galleries that are very heavily involved nationally and internationally and that give us a lot of exposure to a lot of different kinds of exciting artists. All of Jettison is involved in many different types of industries and creative fields, that’s part of our drive is that fact that we enjoy everything we are sharing with our audience and we are living it as well.

NC: What is your favorite article? MW: The article with Michael Darling of the MCA, addresses making changes to keep the Chicago artist in Chicago. This mission is incredibly important to Jettison. We hope our publication will give local artists increasing support and motivation to keep making work in this city and not flee to the East or West coasts.

EA: Oh man I can’t say I have a favorite article. Definitely the feature article right now with Michael Darling is special not just because its our first printed cover story but because as we Jettison start this new change in our production, so is the MCA and the rest of Chicago. It makes me excited to know that there are many people here now ready to take Chicago to the next level. I mean ACRE and Johalla Projects, LVL3, Golden Age, Golden gallery, Roots and Culture, the list can go on with all the exciting art entities that are driving Chicago’s scene right now. It’s an exciting time for creative fields in Chicago and for that I think the Michael Darling story is particularly on perfect timing.

NC: What is missing?

EA: Financial backing. People are always floored when we tell them that we make no money but most importantly we have no money. We’ve really pulled off the last two and a half years from our own pockets with a little help from moms and dads. But the amazing 70 plus contributors is the true force behind JETTISON. We have an amazing family of photographers, journalists, editors, illustrators, marketing peeps, and designers. They have really been the reason JETTISON has been able to accomplish what it has. It would be great to be able to begin to compensate them soon in the future.

NC: How has Jettison grown over the years? What is different?

EA: Well, like I’ve mentioned we are now in print. We are also in the final touches of our digital apps. But really the entire history thus of far of JETTISON has been a learning experience. We went at this slowly, but surely—very, very new to the industry. So we have learned everything from legalities to finances to even content management over the years. Our first issue is nothing like the current one, other than it is still pretty awesome of course.

NC: When did you start participating at NEXT and why? How has that experience been? Will you participate next year?

EA: We first participated at NEXT in 2010. It has been a great platform for us to share our product with the masses. Kavi Gupta and Ken Tyburski (from DCKT in New York) have been great supporters and friends to Jettison. We owe our inclusion in NEXT to them believing in us. They are wonderful guys and we are honored to get the opportunity. This particular year Aimie Quinkert who was Project Coordinator for NEXT was a great help also, she really is a big support to Jettison and is a dream to work with. A very driven girl and I cant wait to see what she does next because really it’s people like her and Kavi and Ken that make any industry worth working in.

EA: All of my moments with Jettison have been amazing even the all nighters trying to finish up an issue or the stresses that come from launching a company, all of it. I wouldn’t trade it for anything.

NC: Has Jettison participated at other art fairs?

EA: We’ve done zine fest, various local community fairs, Armory, some promotional stuff at Miami Art Basel. But thus far NEXT is the only one we have done actual booths at.

NC: Have any other opportunities have become available since Jettison’s
Inception? Will Jettison always focus on Chicago or are there plans to expand nationally/internationally?

EA: Certainly we’ve had amazing opportunities to meet amazing artists and people through Jettison. To work with the amazing team that we do is an honor. Will we always focus on Chicago? For now that’s the plan. We certainly hope to grow and expand to other cities. We do have readers in New York and LA, but well see what the future has in store for us. Abraham Lincoln once said that, “The great thing about the future is that it comes one day at a time”.