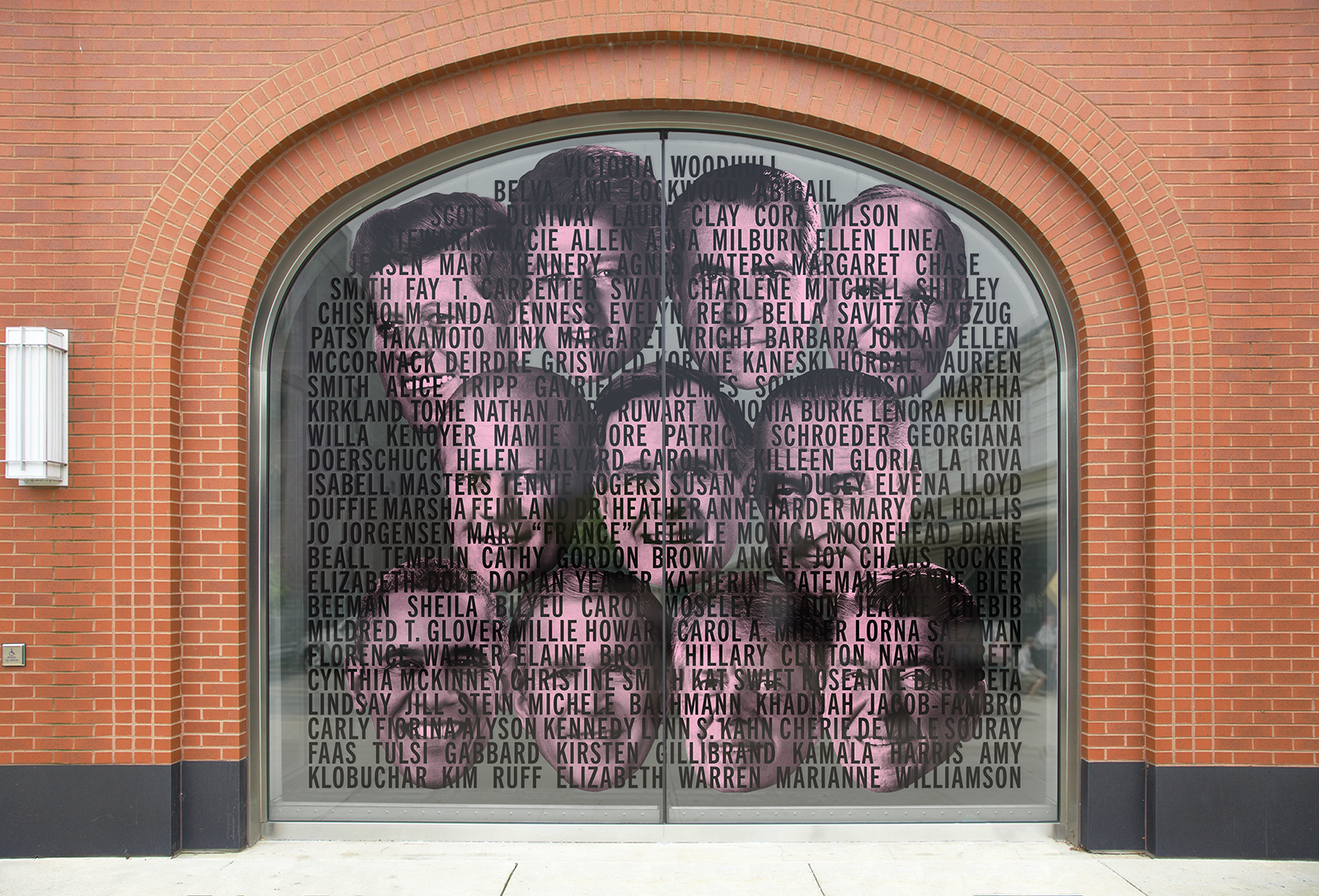 Walking east from the Fullerton CTA station on a dreary, damp morning, I only had to take a few steps to reach the DePaul Art Museum and Los Angeles-based, Kathryn Andrews’s, site-specific work. Displayed on the front window are pictures of past Presidents, their faces covered with text. That morning, their visages seemed as grey as the weather. After the past few months, do we need to see more pictures of Presidents? After all, aside from the pandemic, no issue or event has dominated the news, and our lives, like the 2020 elections.

Among this cycle’s notable statistics is the fact that more women sought the nomination for President of the United States than ever before. Yet despite this surge in interest, men still occupy the top position of both major party’s ticket. Coincidentally, 2020 is also the 100th anniversary of the ratification of the 19th amendment, granting women the right to vote. Both these occurrences are the inspiration for Andrews’ installation which “acknowledges the history of women in Presidential elections.”

The work lists the names of the countless women throughout our history who have sought the nation’s highest office. The women’s names are juxtaposed over photographic images of recent Presidents—all male. The Presidential portraits are pink; an ironic nod to the color typically associated with women (as in, shouldn’t they be holding this office too?). The women’s names obscure the men’s portraits, an artistic decision that has many interpretations, including a desire to empower these voices and make them heard. Prior to my visit to the museum, I had the privilege of hearing Andrews talk about the work. The biggest difference upon seeing the work in person was that the portraits seemed greyer and in some instances, the women’s names almost obliterated the photographs.

Andrews intentionally uses images for one gender and text for the other to illustrate several disparities. Not only have women rarely occupied positions of political power but historically, images of women were not created or preserved. Andrews simply didn’t have access to pictures of Hillary Clinton or Kamala Harris’s forebears. Therefore, her only option was to turn to text. Andrews adds that as a society, we are still unused to seeing women’s faces in the political sphere.

In contrast, photographs and painted portraits of our male Presidents have been widely created and disseminated. Such images are seen on our currency, public sculptures, and in history books, and thus are very well-known. Viewers can certainly identify most, or all, of the Presidential images but likely only a handful of women candidates are widely recognized. Andrews chose images of modern Presidents because they are so dominant in our visual culture and make the installation relevant to contemporary time. She declined to include President Trump because she didn’t want to politicize the work. His exclusion provides opportunities for discussion on both sides of the political spectrum.

The title of the piece are the names of the famous, and unknown, women who ran for President. Andrews finds this a “poignant” way to document their existence. Beginning with Victoria Woodhull’s run in 1872, long before women received the right to vote, the list of names includes women of numerous political parties, races, ethnicities, and professions. In addition to pointing out the rampant sexism in American politics, Andrews’ installation asks us to consider the types of portraits we would like to have included alongside these mostly white men.

The installation is on view at street level, day and night, through December 20, 2020, at the DePaul Art Museum, 935 W. Fullerton, Chicago.

Featured Image: The photo is taken from an angle where the viewer is looking at the piece from a perspective that places them on the right side. The piece is presented under the archway of red brick from the building. There is a glass door to the left of the piece, a flower box on the bottom, and the word “DEPAUL” is slightly legible on the top of the building. Photo courtesy of DePaul Art Museum.