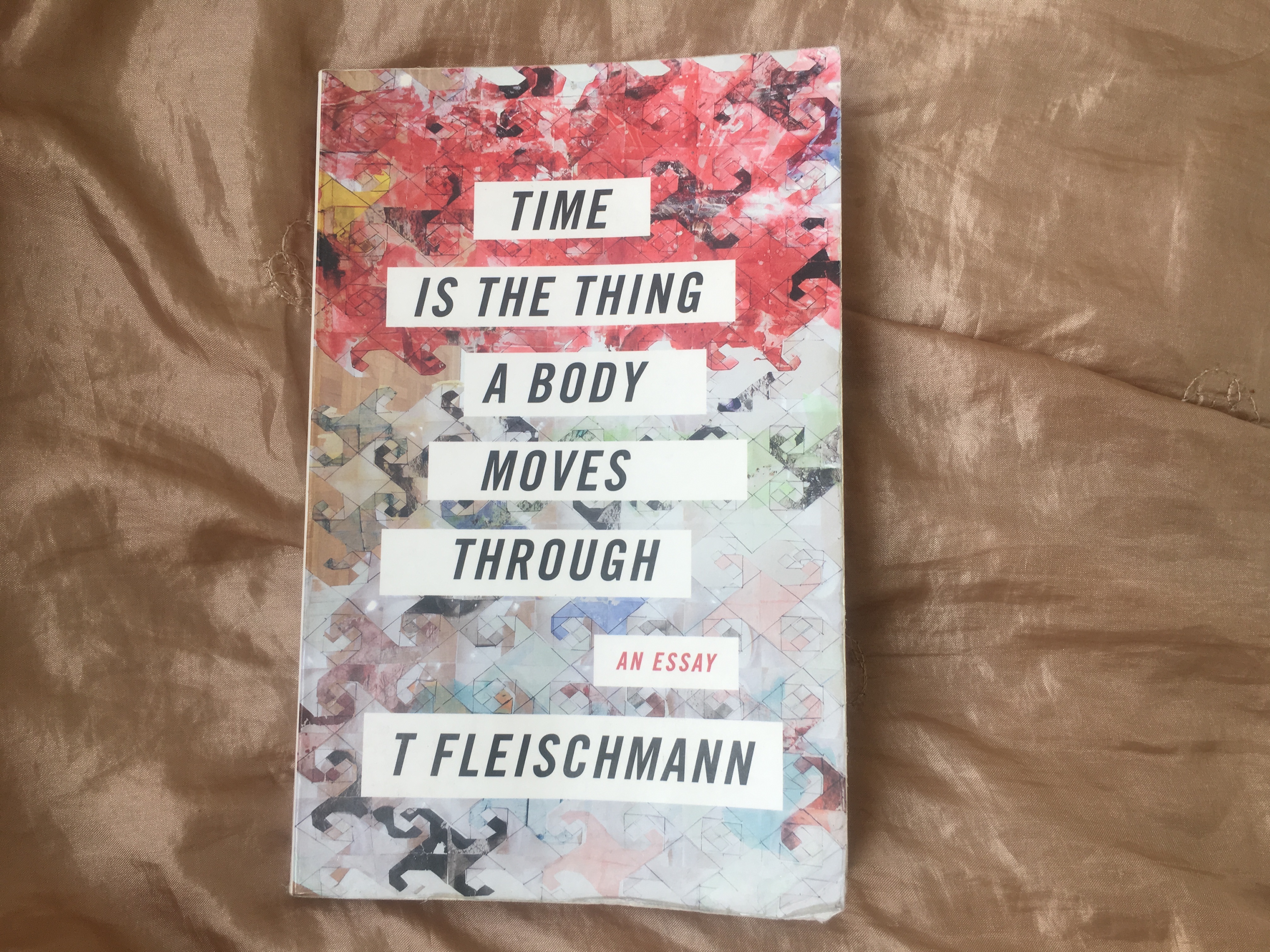 The book begins in transit. Literally moving from the get-go, a bus trip. “I leave Buffalo when the moon is still out, and on the long bus ride south I find myself unable to read.” By coincidence, I crack open my book on a bus ride, too, albeit a shorter commute, and I, unlike T. “Clutch” Fleischmann, am able to read on transit.

This is to say: the book begins in transit because the body is in transit; in conversation with itself and itinerant others.

The title holds all of these moving parts: Time Is The Thing A Body Moves Through. This is one of those gorgeous book titles that gets me all worked up knowing I didn’t come up with the line myself. So beautiful it sounds immediately true and resonant, even if I can’t put my finger on exactly what it means. It resonates with a moment in Clutch’s last book, Syzygy, Beauty, which proposed, “Choreography is one way to articulate time, your body moving forward.” But the new phrasing is less linear, more evocatively ambiguous. I stumble on the hierarchy of animacy: is it the body that’s moving, or does time drag the body? As with all drag, it’s unclear who’s the subject.

In any case, time and space are crucial dimensions in this book. Living at the borderlands of art criticism and memoir, Clutch, a trans Chicago-based writer, charts their evolving relationship with their body, with sexuality, with important friends and lovers, with archives, and with art.

Clutch’s book-length essay shifts between verse and prose, loosely in the manner of a haibun. This is a Japanese genre that is traditionally used for travel writing, though in the West, its form has been appropriated notably by queer writers like Eve Sedgwick, John Ashbery, and James Merill for book-length projects. Unlike traditional haibun, Clutch uses free verse instead of haiku, and their movement between genres of writing is juxtapositional and frictional rather than seamless. Staggered across time and space: the book makes stops in Brooklyn, Berlin, Chicago, and rural Tennessee. What’s more, Clutch jumps topics non-linearly, from erotic memoir to art criticism about Félix González-Torres to sketches of melting ice. The experience of reading this book becomes one of constantly moving between and alongside ruptured and simultaneous time zones. This movement, as the title reminds us, brings the experience of reading back to the body’s embodiment in time. In other words: this a Very Trans Book.

“I think of the love I have within myself and in thinking of it make it an offering to the many-handed hunger of transsexuality. I try to become aware of the movement of my body, which beings stillness while crossing an earth that spins and arcs, and in that collapse of motion I sense the impossible movement of love’s potential, an ecstatic spatiality.”

I find sexual orientation reorients my body in relation to time and space. All of the sudden, all of these unexpected things become doors. Mirrors, hookup apps, hidden cruising spaces, conceptual art.

Sara Ahmed’s Queer Phenomenology theorizes the “orientation” inside sexual orientation to defamiliarize phenomenology (the philosophical field of consciousness and experience) and renew its political relevance. Queerness is a life-world, made at the margins of the world from a new angle. We queers and fags and dykes and enbies pursue our own desire lines as we stray away from lives in rigid boxes and binaries. Instead, queers link up in the margins: at nightclubs and at protests and at art openings and at the clinic and at public cruising spaces and all the other places of imaginative world-making where we somehow find each other. In our drifting, in our eschewal of straight life-paths in favor of tangential lines, curves, and transversals with different logics of contact, we forge a new geometry of desire, a new plot of chosen family.

In Clutch’s hands, the plot of chosen family looks like “a story of bodies that are different, of people who fuck up and make each other happy and then die. Where everything is impossible and so we try to make it real.” A rhizomatic network of alternative relationships on the periphery of heteronormative acknowledgment, like long distance relationships and friends who fuck and lovers who don’t and exes who are friends and who use Grindr side by side lying on a bed together and people who are not next to each other at all but still care about each other and arrange busrides and Craigslist carpools to visit. Queer and trans chosen family realizes impossible life paths outside of the scripted life paths of compulsory heterosexuality. While these paths are often dismissed by heteronormative society, there is radical pleasure to behold in what is deemed frivolous or ridiculous. After all, “you can learn the world from the people wearing the silliest clothes.”

Yes, you: the reader. For Clutch generously reaches out through the page to you, too, in hopes that you, too, might become family. Clutch bares all about road trips and crushes at rooftop parties and poems about ice and “deadly serious joy” and close readings of their favorite works of art by Félix González-Torres and inside jokes with friends like “Squirt!” and “Bridezilla wants weeeeed!” You’re there, even if you don’t know them personally, even if you’ve never been to the places named in the book like Berlin and Brooklyn and Chicago and rural Tennessee, by holding the book you are with them—you are literally holding their words.

And what is this “with”? This minimal preposition, this unit of adjacent togetherness? “Be with” was a lover’s code passed back and forth between poetry power couple Forrest Gander and C.D. Wright, before she passed away.

Accompaniment: a relational mode of being, a sotto voce intimacy. Clutch interrogates this movingly: “Lately, I’ve been thinking a lot about two people next to one another. Who is next to each other, for instance, and why are they next to each other? Or why not? That sort of thing.” I love this line of thinking. Proximity as a conduit of intimacy. Points of contact enabling touch or something deeper, if you allow it to. Lines radiating outward from us in every direction, grabbing hold of whoever is around us.

Social psychologists have long found propinquity—physical nearness—to be a deciding factor in interpersonal attraction. This is a form of social orientation. Who you encounter often is who you’ll relate to. For trans people, that next to can be life-altering: “One of the reasons I’m thinking about this is that I’m not supposed to be next to anyone, in the sense that I never knew people like me existed, so I never imagined myself next to someone or not. Being a person next to someone feels precious, especially while so many forces in the world work with such violence to make sure I am not next to so many people.”

Is this family, even if it’s merely circumstantial? What of our long distance loves, those who are near in heart but far in mileage, such as Ross Laycock, Félix González-Torres’ Canadian lover, and one person “public”? Why aren’t we next to each other more often?

“The best version of me isn’t the person who falls in love, but the person who takes love squarely  for what it is, as an occasion to know someone else, to learn about their desires, to be each a better self together, so long as that is what we both want. To hell with all that hurt, whatever came before. We can have a love where we are both happy, in which we see ourselves for who we are—standing there, where any story might begin.”

I should speak more about Félix. Clutch’s lyric and critical attention to Félix González-Torres was, for me, a primary drawing point. When I stumbled upon the candy spill Untitled (Portrait of Ross in L.A.) at the Art Institute of Chicago, it was a revelation. Nothing I had read about the piece—that the pile was calibrated to match Félix’s AIDS-stricken lover’s weight (175 pounds), that anyone is invited to take a piece of candy from the pile to eat or take home, that the museum takes responsibility for replenishing the stock ad infinitum—could prepare for the ceremonial experience of approaching the candy mountain and its emotional torrents of intermingled grief and play, anger and tenderness, but most of all, creative generosity. How Félix’s work, by encouraging participation, invited the public into a deeply private wound, transforming an infinite loss into an infinite gift.

It’s no surprise, then, that I fell for Clutch’s evocative prose descriptions and insights. Clutch’s interspersed meditations on Félix are wide-spanning, but zero in on his radical generosity. Here’s Clutch observing the balance-point between Félix’s art being an intimate gift for his lover and also a public offering:

“So yes, of course, both:
a thing can be conceived to be so confidential and amatory that only
one person can be in mind,
and then given again and again to someone else.
Because there are no limits to how much we can give each
other, when we recognize that none of this was ever ours to give,
and as we give each other the world.”

These poetry lines melt in my mouth like candy. I admire how the repetition of “give” replenishes (redistributes?) its meanings, reaching what seems like a limit—often right at a line break—only to open another door, revealing yet another portal of connection. What a gift. Poetry’s logic of expansion gives Clutch’s essay room to create haptic and affective encounters with art and life on the page.

Over the course of the book, broken-lined fragments touch on art from most of Felix’s major bodies of work: the billboards of unmade beds, the candy spills, the go-go dancer platform, the twinned Orphic mirrors, the stacks of blank Paper (takeaway “passports”), the water-like beaded curtains, the elliptical and nonlinear autobiographical timestamps. This grand tour through Gonzalez-Torres’s ouvre of minimal conceptual art anchors the book with recurring motifs and thematic touch points. Surprisingly, Clutch skips over one of my personal favorite works by Félix—Untitled (Perfect Lovers), which I find deeply resonant with Clutch’s meditations on time, distance, intimacy, and queer love. Untitled (Perfect Lovers), as I have described previously in this publication, consists of two clocks side-by-side like lovers spooning, ticking in perfect synchrony. I see this image as a potential emblem for Clutch’s title phrase, inscribing the bodiliness of time’s motion. Given Clutch’s empathetic readings of Felix’s other works, I would have loved to hear their reflections on this portrait.

Clutch makes a spill piece of their own with their friend Benjy, using multi-colored hormone pills rather than candy to spell out “Post-scarcity,” writ large against a sky background. The openness of the background image, as well as the word itself, invoke abundance: a dance of possibility in and for the body. Language and art are sources of plenitude; transition is a source of renewed possibility; collaboration is a source of shared joy.

In short: acts of imagination are life-giving.

“This is why it seems important to me that all people create, make art, practice their imaginations, exercise beauty. When we fill the world with artifacts of what we dreamed we begin to learn from who we wanted to be, an imagined people who might know enough to stop making the same mistakes.”

Featured image: T. Fleischmann’s book Time Is The Thing A Body Moves Through, cover designed by Stevie Hanley. The book is laying on a pale pink, silk sheet.

Noa/h Fields is a genderqueer poet and teaching artist. They have written for Filthy Dreams, Telekom Electronic Beats, Anomalous Press, and Scapi Magazine, among other publications. Their first poetry book WITH is out from Ghost City Press. They are fond of techno and avocados.