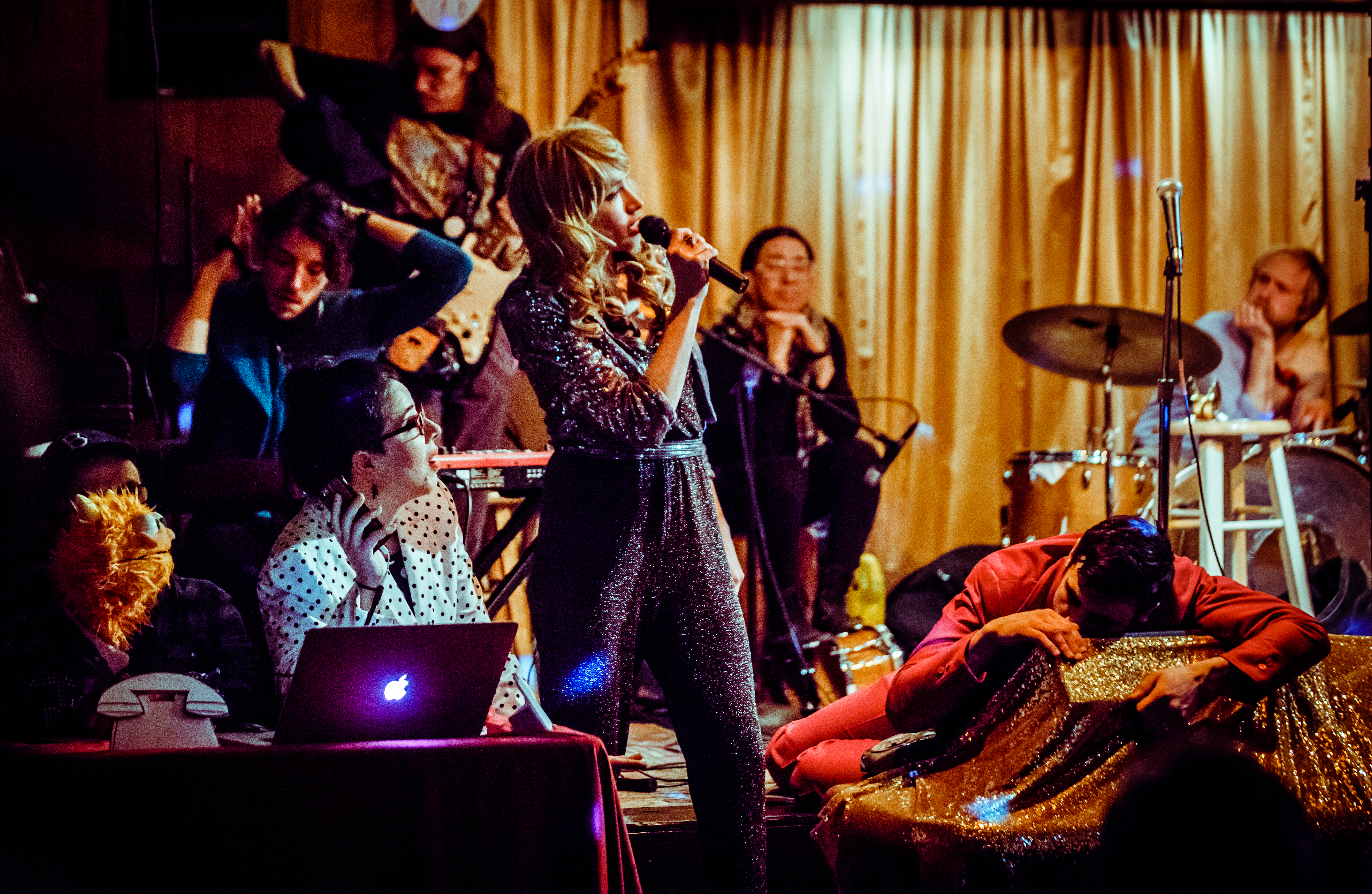 While entertainment venues across the world have gone dark due to the coronavirus, theaters and artistic groups have been finding ways to raise the spirits of people. The NY Metropolitan Opera, Melbourne Symphony, and many other major venues are streaming concerts and recordings.

Some groups, notably groups here in Chicago, have taken digital content to another level: artists are creating new content to live stream to viewers. We talked to three theatrical groups that have been filling our screens during this crisis: Aloft Circus Arts,  Nasty Brutish and Short, and Mr. and Mrs. Wednesday-Night.

Aloft is a Chicago circus school and performance space in a former church in Logan Square. Students, both professionals and amateurs, have the opportunity to take classes on a variety of apparatuses including trapeze, silks, trampoline wall, juggling, acrobatics and much more. With the recent closure of bars and restaurants, Aloft decided to move to streaming circus classes for its students. At set times during the week, students can take live virtual classes with their teachers on topics such as foolery, juggling, stretching, handstands, and conditioning.

Two weeks before the shutdown, Shayna Swanson, founder and director of Aloft, had been keeping an eye on the situation with circus schools in Seattle. She had started talking with her staff and teachers about what the school could do if they were shut down temporarily. “I was adamant that there’d be live classes. So students could see each other, talk to each other…it would provide more quality benefit to students,” Swanson explains. Teachers can also see their students and make corrections on so that students can continue circus training. She wants to give back to dedicated students and a means to keep the school up and running even during a shutdown.

However, Swanson did not expect the shutdown to happen so quickly. When she heard Governor Pritzker’s speech, she knew that it was “what we had to do.” It took them a Monday to set it all up and the classes were ready to go. Aloft decided to make the classes free for all registered students (currently on a membership model) though new students can drop in for $15 a course.

Just a week in, many students have been taking the courses. Moreover, Swanson points out that former students who are no longer Chicago residents and folks who have had an interest in taking classes begin to sign up at Aloft. Swanson noted that it may be an unexpected additional revenue source to help get through the quarantine.

Swanson has committed to paying her teachers as long as she can, while other theatrical companies across the country have wantonly furloughed or fired their staff. But that’s only possible if revenue keeps coming in. Swanson explained that she’s nervous: “I don’t know how long that will last.”  Hopefully, more people seeking the opportunity to learn something new may decide that circus classes are just the perfect thing.

There’s talk of a possible virtual circus cabaret of their show Sanctuary in the near future so check out Aloft’s page for more information.

Nasty, Brutish, and Short is a quarterly (or so) puppet cabaret that is a joint venture of Rough House Theater and Links Hall. Running since 2011, Mike Oleon, Artistic Director of Rough House, described the show as “a venue for puppet artists of various levels of experiences and generations to be able to present work in a low stakes environment.” The show presents a diverse spectrum of puppetry from traditional puppets, to paper and projectors, and object manipulation. Or even in one case, someone’s buttocks became the puppet.

Originally, Nasty, Brutish and Short were going to have its quarterly show at Links Hall on Monday, March 16th. The group was watching performances across the city get canceled as the Governor reduced the maximum of gathering sizes down from 1,000 to 500, etc. They decided that Monday might be the last night that they could safely get folks into a room together. “We decided to take the virus and turn it into lemonade,” Oleon said. They recalled how television used to have a tradition of variety shows and decided that they should live stream their show. The group loaded up a laugh track on their computer, filled the seats with fake audience members, and presented Nasty Brutish and Short: Puppet Quarantine.

Oleon said that about 5,000 people tuned into their show (and additional 2,000 have watched it since). “I was shocked to see how much people needed the streaming experience,” Oleon explains. People appreciated “the effort and gesture and that work is going to go on.” People are still writing them notes about the evening’s performance. The group is planning on another cabaret, staged from people’s homes, on April 6th. Check out their Facebook page and website for more information.

Mr. and Mrs. Wednesday-Night is a mostly improvised classic variety show hosted by a real couple. Lily Emerson, aka Lily Night, described the show as “if you had a really surreal lucid dream about an old school couple variety show, like Sonny or Cher.” Her husband Charlie Malave plays Charlie Wednesday.

The show has had a “loose residency” at the Hideout, performing almost on a monthly basis since 2015. The show has a live band, The Wednesday-Night Specials with a rotating crew, and aside from their theme song in the beginning, the musical numbers are 100% improvised. They also have guest stars, such as Darling Shear and Christopher Santiago. Throughout the night, they pull game ideas and strange titles of songs, from a clamshell purse and always end with a freeze dance with the audience.

When venues closed down, Emerson and Malave began thinking about live streaming a show since they live together. But when they saw Nasty Brutish and Short’s Puppet Quarantine, it inspired them to put their own live show together. Emerson felt that they needed something to focus on, something to make themselves feel better but also something that might distract others as well.

On Wednesday, March the 18th, they hosted the show on Instagram Live with guest stars, Lindsay Weinberg and Brandon Kirkman, who called in on other platforms. They asked their followers and friends to send in titles of actual songs that would be reimagined for the show. “It ended up being silly and just an under hour show. It felt really good,” Emerson says.

She feels that “This is something we can do. We may feel like we are stuck. That there’s not a lot we can do besides staying home to feel like helping. But anyone who is a creator has a whole set of tools to be helpful not just for themselves, but for other people.”

Emerson and Malave have decided that they are going to keep the show going every week through the quarantine. So every Wednesday night from 8 PM to 9 PM, they’ll host another Mr. and Mrs. Wednesday-Night show on YouTube and post to their other social media platforms.

However, while these three theater groups are creating new content and new strategies to bring people together in these unprecedented times, it’s important to remember that many artists have had gigs canceled overnight and many have been laid off, furloughed as theaters, or shut their doors. We asked folks what people can do to help the Chicago art scene.

Swanson recommends that folks should find a way to prepay for things such as gift certificates or even merchandise. Emerson also adds that folks who have been thinking about commissioning artwork from artists, such as a painting or even a new logo for their business, should consider commissioning those projects now. “Find creative ways to engage the artists in our worlds,” Emerson says. Donating a few dollars is also an important way to give back to our artistic communities, no amount is too small.

Oleon suggests that people should remain engaged in the arts. He’s hoping that people will not only watch shows but “see this as an opportunity to come up with something that hasn’t existed before.” He’s “particularly excited at seeing all the weird stuff that is going to come out.”

And of course, taking classes at Aloft, or donating to Rough House, or sending some cash to Mr. and Mrs. Wednesday-Night (@Lily-Emerson) would be a great start.

FEATURED IMAGE: Mr. and Mrs. Wednesday Nights First-Annual-MAMWN-Telethon is photographed with a full stage. There is a figure on the left-hand side that is speaking into a microphone and wearing a glittery pantsuit. There are figures to the left with a puppet and laptop. A figure to the right is draped over a glittery piece of fabric and front of the stage. There are four people in the background that are slightly out of focus and looking intensely at the person speaking on the mic. Photo by Sarah Elizabeth Larson.