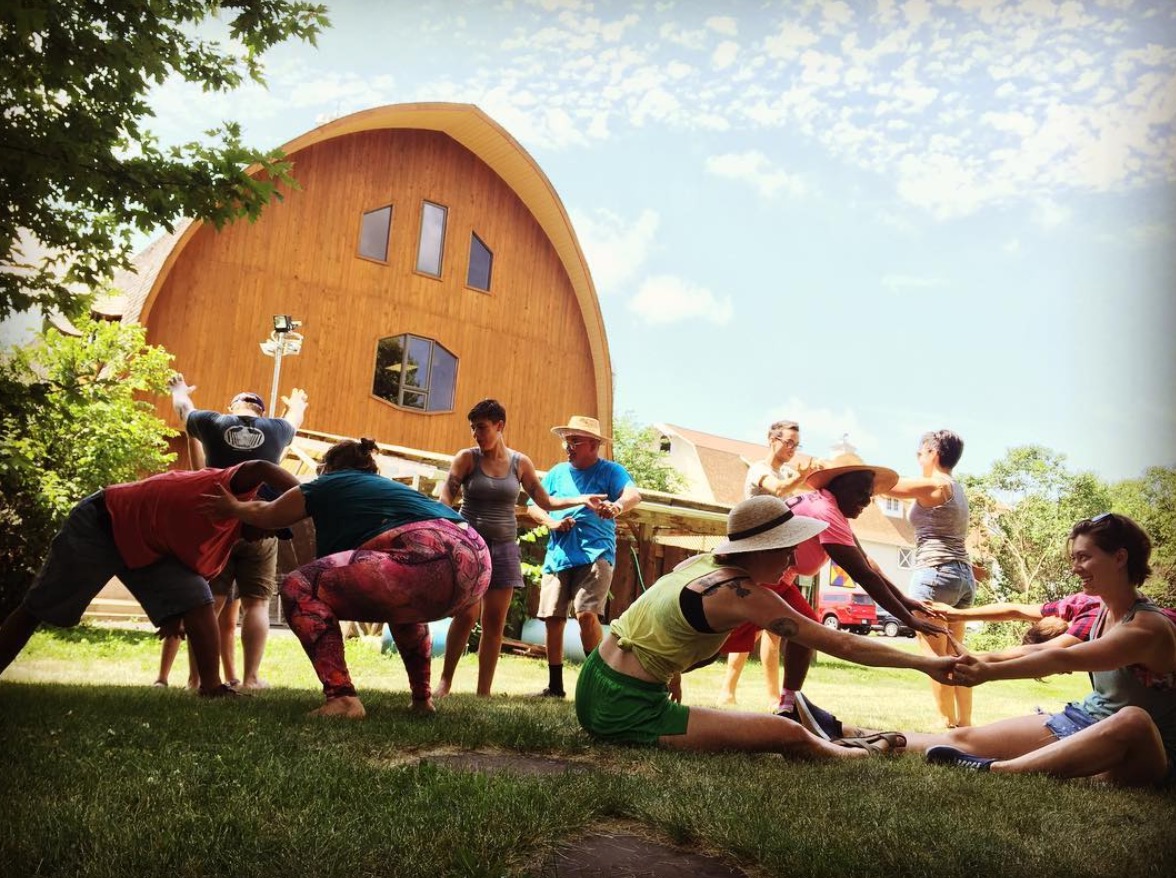 Swarm Artist Residency is not just a creative community—it is an apiary. Like a bee farm, Swarm pollinates individual artist practices and cultivates a one-of-a-kind community. Swarm started in 2015 with the intention of creating a safe, inclusive communal space to nurture underrepresented artists’ practices. Each July, Chicago artists and healing practitioners get out of the city to gather on a farm out of state for a low-cost or fully-sponsored residency. Artists nourish in each other’s co-presence in community workshops, shared meals, and healing circles. Away from the city’s noise, new ideas buzz.

Four years into the experiment, Swarm is putting on its first public exhibition in the city. Its showcase of current and former artists in residence is timed for the summer solstice: Friday, June 21, 7:30-10:30pm, at Logan Square’s FDC Studios. In addition to giving the public a chance to engage with Swarm’s art and communal energy away from the retreat space, the exhibition fundraiser will also help cover 2019 residency costs for accepted artists. I talked to two of Swarm’s Queen Bees—Zoe Schwartz (a co-founder of the space) and Amanda Staples (programming and development coordinator who curated the exhibit)—to learn more about Swarm residency and what you might expect from their showcase.

Noah Fields: How did you get involved in Swarm?

Zoe Schwartz: In the spring of 2015, I quit my day job and wanted to spend some time at a residency—however I had missed most of the deadlines and found everything to be very expensive. I decided it might be fun to start a small, community focused artist residency. Alongside Nik Zaleski and two other folks who no longer work with the organization (Lee Stark and Morgan McNaught) we somehow found some land, some participants and some energy and within three months had created a sliding scale artist residency. That first summer we served about 50 artists and have seen our numbers grow exponentially every year.

Amanda Staples: When I first moved back to Chicago in 2017 after doing artist residencies in Berlin, Germany, I was looking for a local opportunity here and I came across Swarm, applied, and got accepted. I was really busy leading up to the residency so when I got there, I was super present. I didn’t know anyone there, but left my heart and mind completely open to the universe and to what.  It still stands as one of the most beautiful experiences I ever had. I recognize my residency with Swarm as a turning point, a catalyst in my artistic career in Chicago I because it was a hub of really progressive, diverse, forward-thinking creatives.

NF: What does Swarm mean to you?

ZS: Swarm has always been a place of deep community for me. It has been a privilege to spend such intimate and dreamy time with so many Chicago artists and see collaboration seeded between folks.

AS: I met so many great people that I still collaborate with to this day. Last year, when I saw that Swarm was looking for new Hive Queens to join their team, I hopped on the opportunity to do it, I felt a huge calling to do it.

NF: Can you share any stories that embody the Swarm residency experience?

AS: “Swarm and Tell” is a good one. The residency is self-directed, so you have people of all mediums conceptualizing new ideas and collaborating with one another. “Swarm and Tell” is like a show & tell, where you can present work or share your ideas in this really intimate circle of artists and get creative feedback. I think what makes Swarm really unique is that there’s so much vulnerability in the space. There’s so much good energy, an honest platform for expressing yourself, it’s totally welcomed and encouraged.

ZS: One of my favorite memories of Swarm is from the first year. On the last night we had a closing ritual where we created crowns out of wild flowers and glow necklaces and hiked through the woods at dusk to a fire pit on a hill where we sang and howled at the blue moon. Also the same year we made a slip n slide out of a big tarp. To me the magic of Swarm comes from that mix of basic summer camp pleasures mixed with the sacred and spiritual that so many of our residents value.

NF: How does Swarm Residency work?

AS: Swarm is a Chicago-based residency, meaning that the hive (the organization) is based in Chicago, 90% of our artists are from Chicago. We think it’s important to get artists outside of the city to fully retreat and dive into their week. So every year, we go to neighboring states and rent out a farm so that people can connect with nature and be removed from any static from the city that might be preventing them from making work.

We offer sliding scale payments to all of our residents. Dinner only costs $5 a night. The residency experience doesn’t need to be a luxury; we believe that all artists regardless of their means deserve access to the resources and space to nurture their creativity and expression.

NF: Why does Swarm bring together healing practitioners alongside other artists? What does it mean to center healing in an artist residency setting?

AS: We bring in healing artists who provide sliding scale services for our artists because we recognize that it’s not just stepping outside your city to rejuvenate. We really want to aid our artists and nourish their creativity, supporting them in a way that might not be available to them in the busy city life.

The healing artists get an opportunity to retreat as well, in addition to showing their craft. Their program is sponsored, so all their expenses are covered. Their presence is part of what makes our residency so unique.

NF: Who’s involved in this showcase?

AS: Over the past four years of the residency, we’ve hosted over 250 artists—

AS: —and this showcase will include work by 30 of those residents.

NF: What was the process of reaching out to former/current artists for the exhibit?

AS: We did a general call for submissions to everyone in our mailing list and our social media platform, for new currently accepted residents and alumni of the residency. After that, I contacted folks directly based on recommendations. And then, I literally went through the residency archives and looked at the different mediums that I wanted to showcase in the exhibition and contacted those artists directly. I probably sent over a hundred emails.

NF: Why should people come to this exhibit?

AS:  It’s an opportunity for the public to see the work that is made at Swarm and  to see the artists that we support in our programs. If we can recreate even a hint of the magic that happens at Swarm at the exhibition, I would be humbled.

ZS: This is our first actual exhibition! People should come to see this community in action! There will be amazing performers, badass visual art and some great donated food and drinks! Also, people’s $10 suggested donation at the door helps us feed and house the 80ish artists we have coming to Swarm in July! Think of the beautiful art making you could support with just $10!