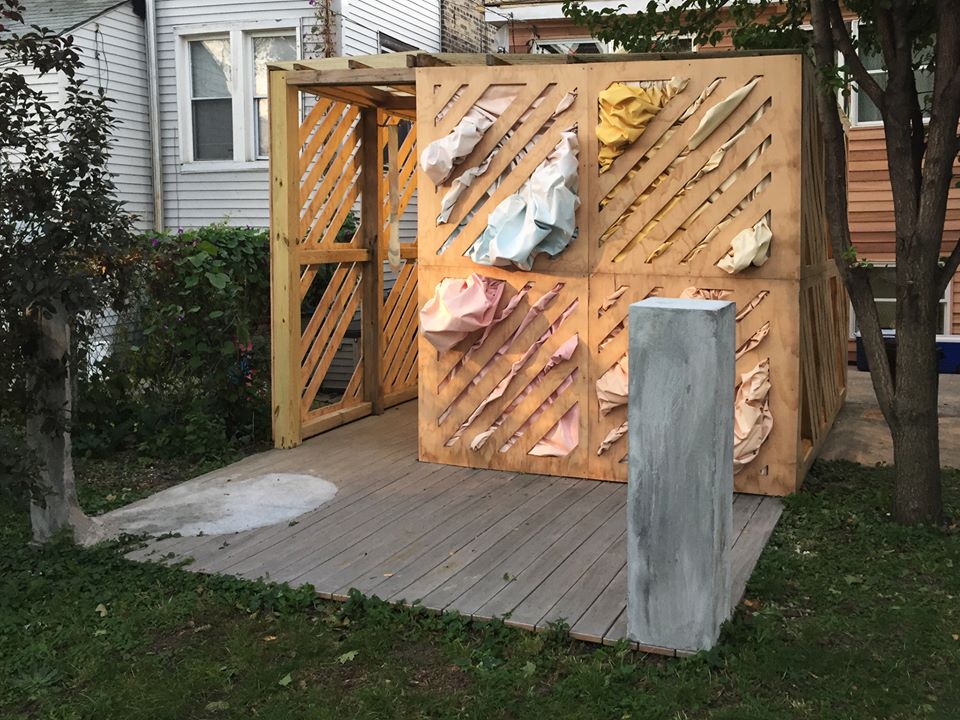 The Franklin’s My Feet Have Lost Memory of Softness utilizes space and place to explore the concept of softness, questioning and expanding the audience’s pre-existing relationships with change, time, and the hierarchies of an art gallery. Curated by Ionit Behar, the crux of the installation is the representation of softness as a characteristic of mutability and change. Within the realm of an art installation, change can be indicative of transition and fluctuation in a viewer’s experience and subsequent understanding of a work. This conception of softness is compounded by the nature of the Franklin as a site, a quality described by the show’s written materials as an “unconventional and unofficial presence.” Such presence is derived from the fact that the Franklin is an artist-run site within Edra Soto and Dan Sullivan’s East Garfield Park home and yard. These blurred boundaries between the communal and the domestic are in and of themselves a softness, one that speaks towards an artist community formed from transition. When entering the Franklin’s outdoor space one is immediately confronted by Jean Alexander Frater’s amorphous pastel canvases weeping through the panels of the site’s central wooden structure. Inside the structure Alexander’s canvases are stretched taut across the slats, a contrast which calls to question how audience members interact with the piece’s spacial dimensions and materiality.

Michael Rado’s Unfence stands in the center of the structure, challenging viewers to consider what it means to fence space. Rado’s piece is diminutive when compared to the fences that delineate the borders of the surrounding homes and yards and only serves to partially separate a small empty space. As Unfence removes the function from the form of a fence, one is compelled to consider the myriad ways in which fences are enacted between people and spaces within an urban setting. Such ideas of separation and categorization are prescient when considering the Franklin’s East Garfield Park neighborhood as a community impacted by the specter of the early 2000 housing crisis and systemic racism. In order to view the video component to Unfence, one must enter the Franklin’s living room space and head down the stairs to the viewing area. When viewing Rado’s video work, audience members are impelled to sit with one another on the Franklin’s couch or the floor, continuing the soft separation between the shared and private. The video itself features Rado walking through the city while carrying a picketed section of Unfence. The cityscape looms large in the frame and provides a stark contrast between the minuteness of Rado’s figure and fence, engaging questions on where and why fences are built.

The idea of softness as a quality of change reconfigures the viewer experience. Audience members are afforded a certain freedom through Behar’s engagement of metamorphosis. Simply put, our role is not limited to passive viewership and artistic consumption. We are active participants who possess the power to redefine how art and community form.

My Feet Have Lost Memory of Softness is at the Franklin (3522 W Franklin Blvd) from October 22nd to November 19th.