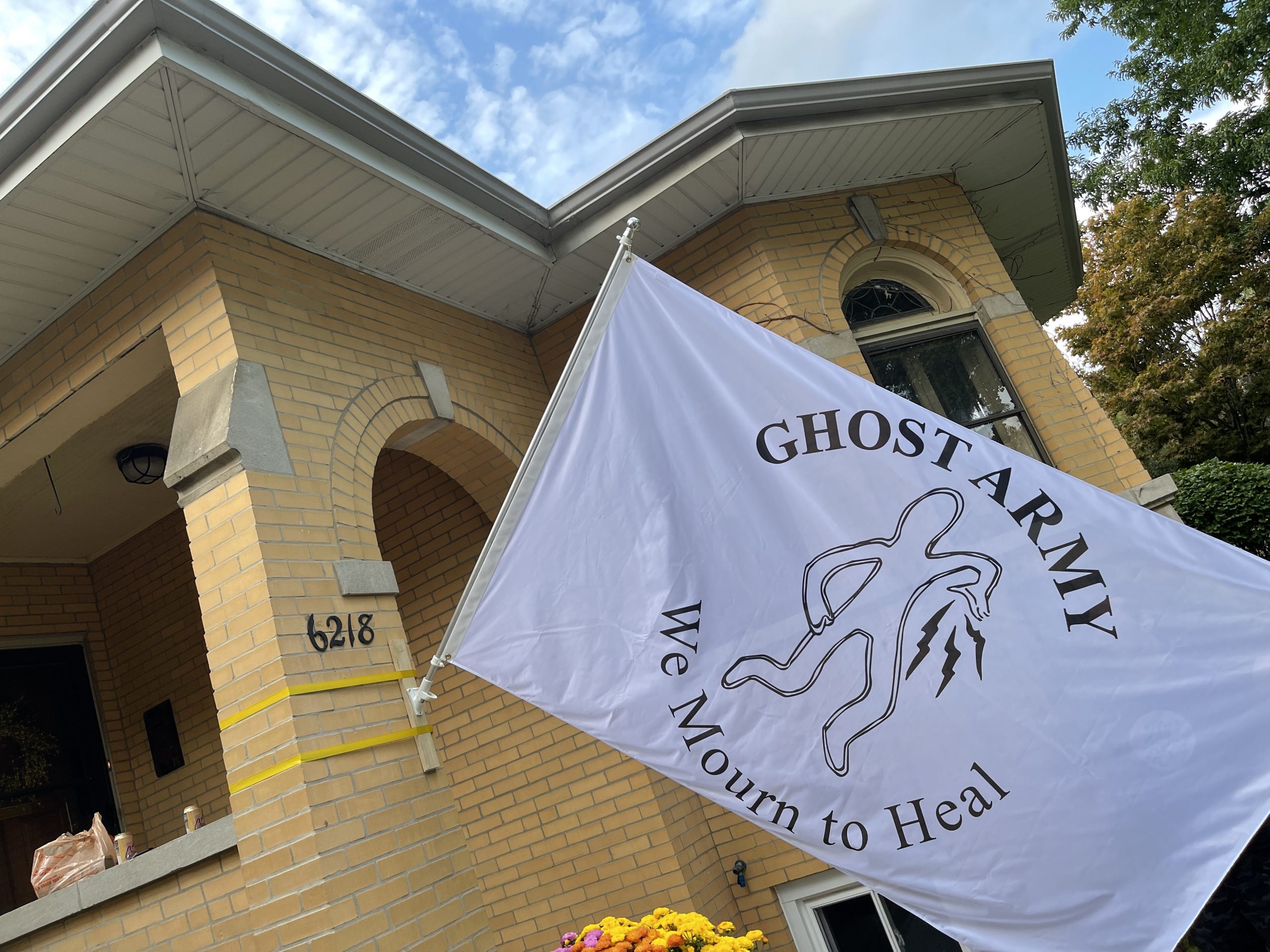 Featured image: Michael Workman, “Ghost Army” flag 2021. A white flag depicting an outline of a figure with the words “GHOST ARMY/We Mourn to Heal” hangs from the front entryway. Courtesy of the artist.

Snapshot is a Sixty column that takes a quick look at art history as it happens in Chicago. We send artists and organizers six short and sweet questions to tell us about what they are doing right at this moment. For this feature, we sent a few questions to Michael Workman, one of the many artists included in the Terrain Biennial, an international public art festival on view from October 2 – November 15, 2021. Founded in Oak Park in 2011 by Sabina Ott, the Biennial is an act of radical decentralization, taking art from privileged urban centers and bringing it into everyday spaces. The theme for this year’s Biennial is K.I.T (keep in touch).

Sixty Inches From Center: How did your piece Ghost Army come to exist? What was the inspiration or driving force behind its creation?

Michael Workman: Initially, the ghost figure was part of a series of drawings I started making in 2015 [when I was] trying to figure out how to translate physical movement from the 3D plane of a dancer or performance artist’s body as it moves through space to the 2D plane of written choreography, or what’s referred to in the ballet world as “dance notation.” I paired that idea with this ghost shaped figure I’d been doodling and started referring to as Allen the Chalk-Line Ghost. I depicted him as this chalk outline shape typically seen in crime scene photos, which were historically never actually used for police evidence but were, in fact, used by news photographers to visualize victim’s dead bodies for readers.

So, after experimenting with the figure for a few years, and drawing lots of different “anchor positions,” Allen started to develop into a character. He began to morph into this visual metaphor for the lost and dispossessed of our collective lived moments. At the same time, during the peak moments of the pandemic, I watched these rising death toll numbers and it was just unbelievable to me what was happening in our country. So from that, I had this notion in my head that if we took all the people who had died [from COVID], [which has] larger numbers than all these past wars, that we would have our own ghost army. So that’s what I called the project, and I thought maybe Allen could act as a prompt to make people think about all those we’d lost, all these people we let die through our willful neglect as a society.

I was also having a lot of conversations with friends in my queer communities about that neglect, what it is and how it compares to what happened during the early days of the A.I.D.S. epidemic. As I note in the statement on the Terrain Biennial site for the project, I decided to dedicate Ghost Army to my uncle Mark Workman, who died in the late 1980’s–one of the first victims of the A.I.D.S. epidemic who had been shunned for his homosexuality by my family, and whose grave goes unrecognized and without a stone marker to this day.

SIFC: What else would you like to tell us about the work?

MW: At some point while working on all this, I happened to Google the phrase “ghost army” and discovered that it was actually a thing. During World War II, the U.S. military established a special group called the 23rd Headquarters Special Troops to serve as a “tactical deception unit” that was staffed by visual artists in the fight against Nazism. My flag, produced with design assistance by Ebere Agwuncha, was adapted from the official service patch of the WWII Ghost Army unit. On the flag, Allen has the signature three lightning bolts coming out of his outstretched hand and the words “GHOST ARMY / WE MOURN TO HEAL,” which I think is really how we start to effectively fight fascism, which feeds on our apathy and indifference to the suffering of others.

SIFC: How did Ghost Army come to be installed at this particular home?

MW: The Ghost Army flag is installed at 6218 N. Rockwell, [Chicago, IL], which is the home of Andrew Schachman and his wife Dana. Andrew and I were commiserating about this year’s [Biennial] a year or so ago and came up with the idea of doing an art exchange: I installed the flag at his house, and he installed an architectural installation on my back landing called Cloudless Sky No. 1.

SIFC: What mark would you like to leave on your audience?

MW: I think I’m trying to draw some pretty big connections with the Ghost Army project between the A.I.D.S. epidemic and the COVID-19 pandemic, but also between those that we’ve lost because of this sort of baked willful kind of neglect, and the way in which we do not easily embrace difficult emotions such as mourning and sadness in our society. But I think the “willful neglect” portion should haunt us as people who want to help establish the “beloved community.” It’s what redlining was about, it’s what the dehumanization of gay people was about that led to increased and unnecessary deaths during the onset of the A.I.ID.S. epidemic. It’s what the history of a lot of our most elongated bigoted, racist, classist, and otherwise dehumanizing systems of thought are rooted in. To overturn these decaying socio-cultural institutional thought conventions on some level would mean we have to recognize our dependence on one another, and abandon these embedded ideas of rugged individualism…that are literally killing us as a society.

SIFC: Were there any challenges in creating the work?

MW: Most of the challenge of this work has been the unsupported, sustained attention required to formulate it over time, and getting people to understand the initial dance and performance art goals of the piece. The Allen series started out as dance notation, and collectively, I see all the various Allen drawings as constituting a “Dance of the Lost” that I’d still like to someday produce, but which has been near impossible to get made so far.

In a larger social sense, I also think there’s something foreboding for people about the Allen figure as, well, a chalk-line ghost resulting from violence. This figure, built to remind people about death and loss and these difficult emotions we seem to have trouble as a society contending with, though it’s exactly what we need to do to liberate us from those emotional foibles, which otherwise become an anchor around our necks.

SIFC: How does Ghost Army relate to your larger practice?

MW: Through my larger artistic practice, I think I’m often attempting to trace the contours of identity between public and private, and the flaws in how we define and represent them in our mass media, to ourselves, and to each other. Oftentimes, too, my oil, watercolor, painting, and drawing practice is intentionally grotesque or obscene as a necessary form of protest or prompt to awareness-raising about a range of social issues, including gun violence or the puritanical suppression of depictions of sexual joy, especially women’s. I think we sanitize our media in a lot of ways, and so are not frequently confronted with or even aware of the consequences of our actions.