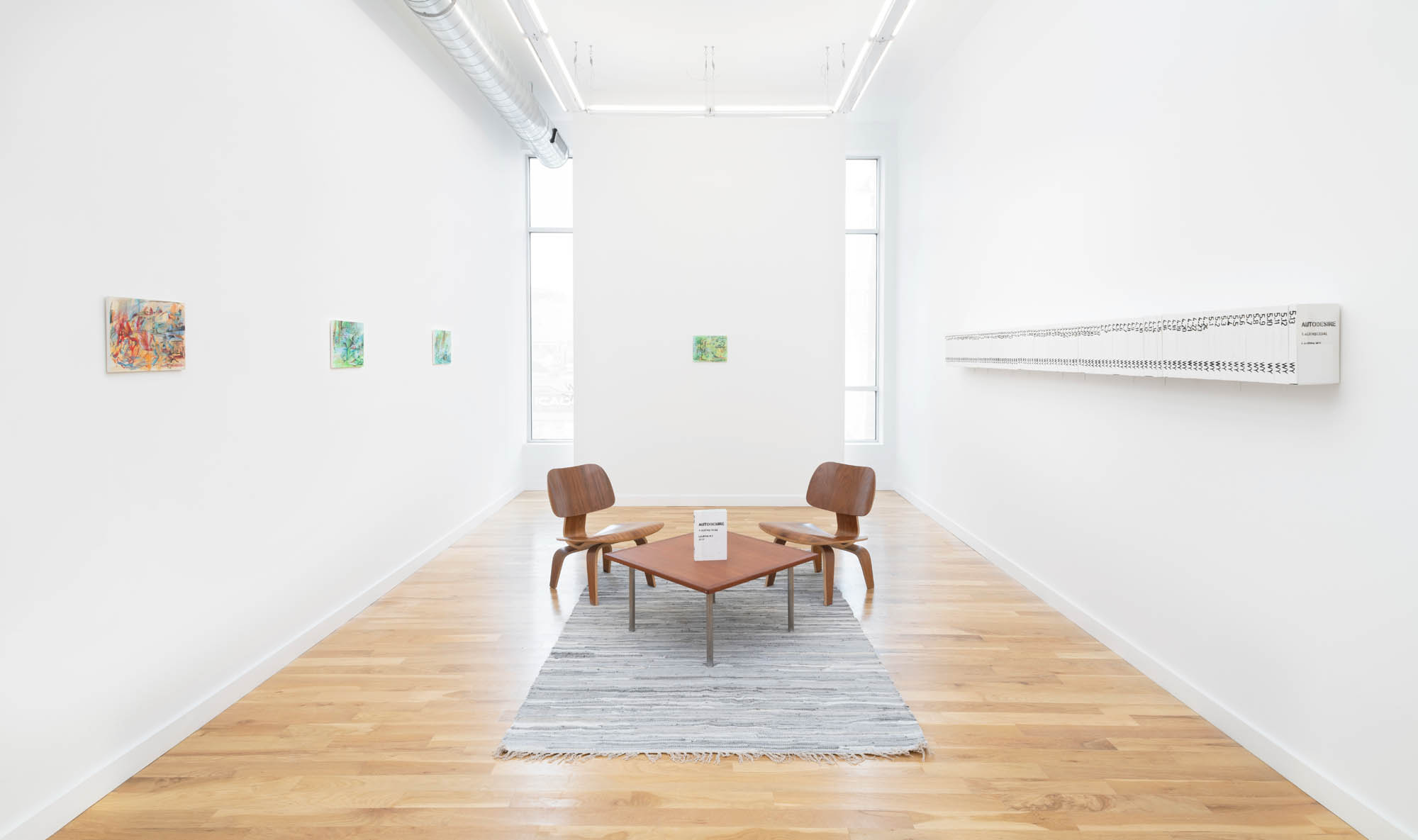 Featured Image: Installation shot of AUTODESIRE in Gallery Two of Western Exhibitions. Center image sits a square wooden table and two chairs where visitors can request specific volumes of AUTODESIRE. To the right of the table, volumes of AUTODESIRE are closed and mounted on the gallery wall. Each piece’s wooden spine lists the artist’s last name, volume number, and title where appropriate. To the left of the table, two pieces are exhibited on the gallery wall. A final piece is displayed on the wall directly behind the central viewing table. Photo by James Prinz, courtesy of Western Exhibitions.

Alice through the looking glass, St. Teresa’s translucent veined ecstasy, Sylvia’s rhinestone tears trickling to wet the country ground. Fantasy is hard work; tell that to the Sadeian Woman or Louise and her spiders. Our scene opens at the end of the world, it’s a blazing stage. Take the man at his word when he says, “I am become death.”

Beneath the desert’s floodlight suns and Planet Hollywood’s unearthly glow, a champagne orgy twitches to life. The video for Britney Spears’ song “Work B*tch” was made during her 2021 Las Vegas residency, a time in Spears’ career that exists hand in uneasy hand with her father’s coercive conservatorship. While the song itself is a cavalcade of sex––buying it, having it, knowing it—bodies writhing in lockstep, it is a performance girded by desperation. It’s the truth of a life where nothing good has happened in stillness. A slow death lives here, something ill thrust upon your shoulders again and again. Maybe it’s Maybelline. Or maybe it’s the systems that suffocate, exsanguinate, and leave only a husk behind. What then does this, can this, mean for pleasure? For fantasy? Where can we find the seeping cracks, the friction of two weeping irises, the obliterating grace of pouring one honeyed yolk into the other? Salt crystallizes around each hole, now frozen halos. It’s so swift, so fierce, that which lies between. You want it? You better work.

Sigmund Freud was a Taurus. Sex then is never just sex, it’s a biological imperative, sacral spun candy, that welcomes manifestation of life both comfortably worn and shine fluttering just within reach. Lauren Wy’s AUTODESIRE VOL. 1 is a story of eros. The primordial, oozing eros that was here before, during, and after the body’s final bow. No matter the apocalypse, there’s always a curtain call for every virtuoso. We love a good encore. Your body is that endless stage, the delicate infinity of a cat’s eye snail shell. It’s home and un-home, the place to break your bread, bed, and back. There’s a reason why Schubert named the quartet “Death and the Maiden.” It is a story of what comes next, a tale that presents the possibility of the next. A next after death, a next in death. Wy frames AUTODESIRE as a graphic novel machine, akin to the Surrealists’ game of exquisite corpse. Two hundred and thirty-two process-based drawings made with oil crayons build off, collapse in on, disassemble, reassemble, finalize, notarize, change, shift, explode, and implode the fragments of a heroine’s erotic memories, half-formed stories, shifting accounts, fevered imaginings, both through and after death.

Let’s read death here as a metaphor. Those self-abnegating impulses that swirl throughout each unconscious, those desires that twin pain and pleasure. Our heroine’s journey does not end at death. Rather that is just the beginning of the story. Thanatos and Eros both burn here, it’s how your thresholds exist on the same continuum. Wy’s heroine might be dead, dancing with splayed limbs and bloodless lips, but she is also frozen in a cycle of repetition and articulation. In each drawing, each memory, each wish, language fails. There’s a breakdown of form and narrative. The body as symptom and smoke signal to the heavens centers a fundamental indeterminacy. Our relationship with each piece changes and shifts through Wy’s use of pressure, friction, and optical blending of wax color. The eyes don’t follow the lines of bodies, rather bodies are found everywhere and nowhere, with deeply saturated oils imbuing each scene with the inevitability of the erotic. True north cannot hold within the hall of Dionysus. Revolution can only be found within the hysteric discourse.

In Turkish, the word odalık refers to a chambermaid or female attendant to women of the court. Jean-Auguste-Dominique Ingres’ 1814 oil painting Grande Odalisque depicts a nude, fantasized and orientalized, physically impossible and presumed sexually available, odalık passively gazing at the viewer. In Claire Denis’ 2001 film Trouble Every Day, the main character’s wife lives another day while the nameless maid meets a brutal end by sexual violation. A sexy “French maid” costume currently goes for seventy-five dollars on the Leg Avenue website. Sometimes the best revenge is memorialized, frozen for posterity. Near the top of the picture plane in Wy’s Revenge of the Odalisque 3, there is a deep swath of pale meat pink. Rivulets of that same shade of blush run down the picture plane like splashes of a celebratory fountain or sugared spurts of blood. The blush from blood that can emerge from the body each month, and the blush from exertion, as propulsive jets of burgundy stain your hands, in Artemisia Gentileschi’s 1620, Judith Slaying Holofernes. Outlines of mouths and grasping hands emerge amidst the serpentine shadings of color. Barbara Creed’s Monstrous Feminine proposes that the appearance of blood in art can signal the presence, ever felt, of the archaic mother. It’s the primal scene, a new birth, again, again, and again.

Maybe all mothers have eight legs. Louise Bourgeois’ relationship to psychoanalysis (herself being an analysand off and on from 1952 through 1985) has been much discussed as that period left an indelible mark upon her artistic practice. Wy cites Bourgeois, specifically her Insomnia Series, as formal inspiration for AUTODESIRE’s structure. Created in 1994 to 1995, Insomnia contains two hundred and twenty works on paper made during bouts of sleeplessness. Though the direct correlation between Insomnia and AUTODESIRE is the quantity of work, both series contain studies of in-betweenness: they are remnants of penetration, our veils between worlds, shared road maps to purgatory, the reminder that we’re both awake and dreaming.

Andachtsbilder is the art historical term to describe images meant to invoke the feeling of devotion. Such images usually depict Christ or Madonna in a state of pain, exhaustion, or beatific contemplation. These images were usually crafted as objects that could easily be carried with someone, something to be touched throughout the day. Some personal relics could also contain fragments of bones: items of, from, and to which the body will return. Bones are a reminder that there is beauty here, something holy in its wants and urges. Each AUTODESIRE installment, every chapter, is covered by the shade of a bleached white bone. Two handmade hinged wooden panels open to display the drawing inside. The art may be shown or stay closed and concealed, a tightly held secret. Saint Rose Philippine Duchesne was the first saint canonized by the Catholic Church west of the Mississippi River. Saint Rose resided in what is now the Old Saint Ferdinand Shrine in Florissant, Missouri. Rose prayed in a small room under the building’s staircase, next to a reliquary that contained a small shard of St. Valentine’s hip bone. Infinity can exist in the curves of the pelvis; you just need to know where to look.

In Maryse Meijer’s novel The Seventh Mansion, the skeleton of a martyred child saint comes alive in secluded woods to perform miracles, of a sort. Think of them more as reminders. Reminders that even as the world burns relish the heat on your face, as another stands beside you and feels the same. It’s the kinship to your step, a dance laced with bolts of lightning. Smell the ozone on your fingertips. Bones, color, cum, sweat, spit, all from the body and to which we ultimately return. AUTODESIRE is our treasure map, a way forward in crisis, the feeling of warm hands on your shoulder. To dance, to feel, to live in this body and all its weariness is both blessing and curse. But why not? Grasp back as hard as you can.

Lauren Wy’s AUTODESIRE VOL. 1 is on view at Western Exhibitions through October 30th. For hours, location, and pandemic guidelines, please visit their website.

Annette LePique is an arts educator and writer. Her research interests include the body, race, illness, gender, and trauma. She has written for Spectator Film Journal, Fashion x Film, Cleo Film Journal, Another Gaze Feminist Film Journal, Certified Forgotten, and Dilettante Army. She has a background in dance and music.