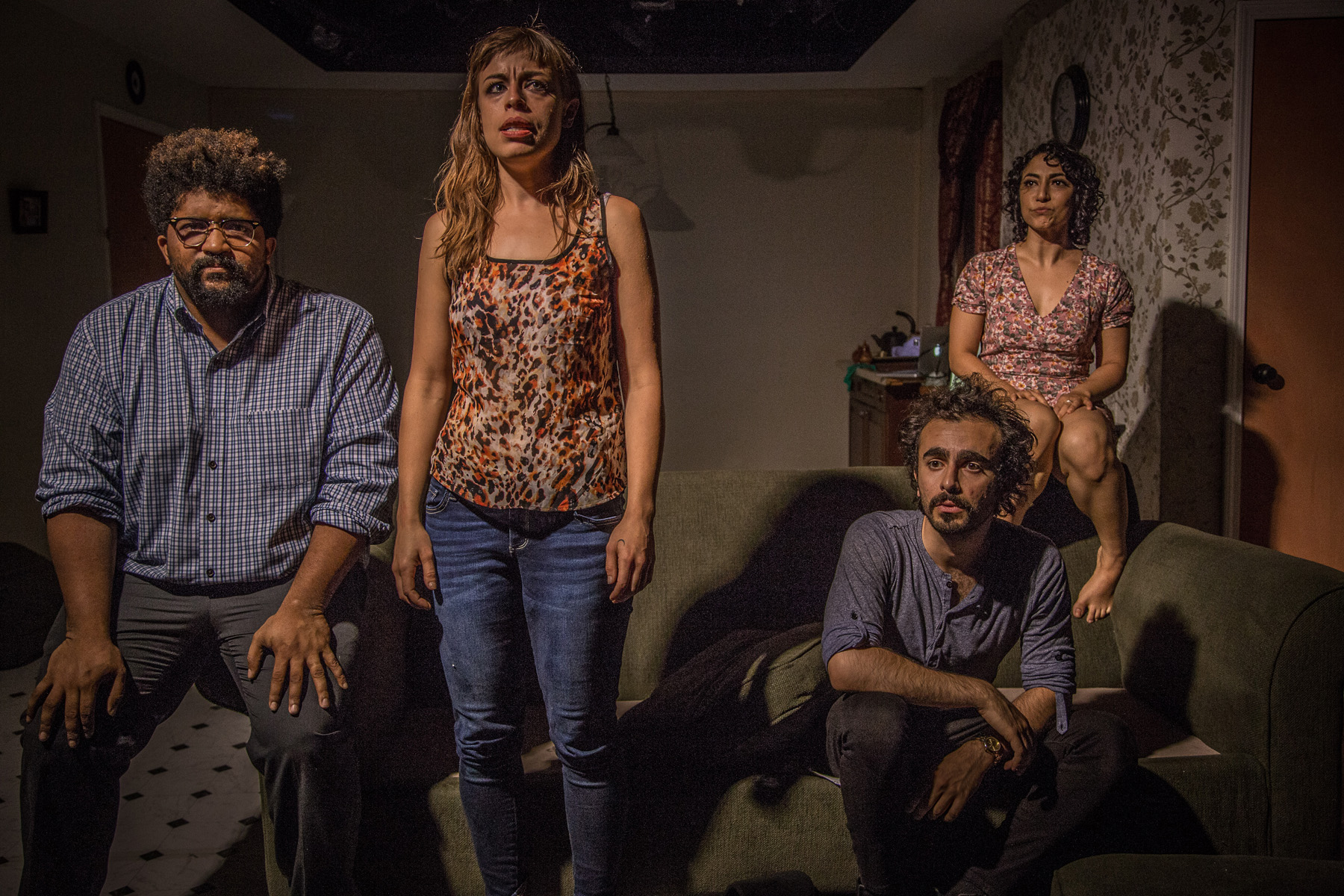 [Spoilers for “KISS” below]

“The cards spoke to a suspicion that many whose work is play can never be free of: that you can only flaunt your triviality for so long before punishment is due. A date has been selected, and on that day there will be a great culling…”
– Helen Oyeyemi, “is your blood as red as this?”

The map is not the territory.

This is where we must start because we must acknowledge that a play is not the story and a text is not an experience and that characters are not people and that words are not meaning.

The map offers an idea of terrain, of forests and rivers, and creeks. From a map, you can discern a route and direction and make plans. When I was younger, I carried maps where my family went, charting courses across town through subways and over bridges. At the zoo, I tracked a path towards the birds of prey, making sure to pass the reptile house and always to avoid the picnic tables because there, people accumulated and the path clogged.

But a map is not the terrain and a play is not the story. Maps and plays are interpreted and reformatted into respectively three and four dimensions, but there is no mud on a map, no logs, or mosquitoes or crowds. There are no dilapidations and no gunshots and no inhalation or coughing or gasps on a map. You avoid the picnic tables through experience, through sweating and being bumped about by an anonymous summer mass.

Misunderstood context leads to mislaid plans. A map’s context is the existence of the terrain.

The context of “KISS” by Guillermo Calderón is the sad lingering of a naturalist living room play in America and the tragic engine of the Syrian Civil War.

“KISS” cannibalizes itself, sensuously, jokingly. It winks while teasing teeth and tongue with fingers, drawing them along its mouth like a piano, only to pull away and smile before shoving its foot into mouth, while the crows and you watch. Its eyes bulge as it vanishes into its own maw, digesting, leaving flecks of shimmering flesh on the audience while lessons were -maybe not- learned. Emaciated organs. Eyes glazing over. Hollowed-out corpses, and a song.

What I mean is that two members of the audience left after 30 minutes, believing that “KISS” was a melodrama where people die of broken hearts and the world beyond the play is not the play. To those two who left, Damascus in 2014 is identical to Chicago 2019 and this story stopped existing once they exited. The rest of us remained, confronted with paradox, the panic of misinterpretation and privilege.

The metafiction we observe (a fictionalized version of the real-life Haven Theater putting on a fictional play also titled “KISS”) presents a play, thirty minutes long, hermetically sealed from the outside world. This vacuum is undone by a Q&A with the fictional Playwright (who I will demarcate with a capital-P) when all the air rushes into the room and the Cast (a capital-C) is forced to consider the ways that context changes their work, because Chicago is not Damascus and our points of reference are not the same.

A kiss is not always a kiss and lyric poetry is not always saccharine. And maybe a soap opera is more than a soap opera; admittedly silly, the Playwright says, but deathly serious, as bullets fire, as miasmas of sarin gas roam and Bashar al-Assad’s state-sponsored atrocities run on. The soap operas are, as the Playwright (who is not the Playwright or the playwright) mentions, an opportunity to escape their daily pains and substitute them with minor pains, frivolous dramas. “Did you put the gunshots in?” the Playwright asks.

As a pathetic misplaced gesture of politeness ends alongside the call, the air is crisp with shame and lack and the question “what now” hangs heavy.

Calderón, the playwright, said in an interview with American Theatre, “[…] in this play, misunderstanding is not a roadblock for theatre. Theatre is going to push through, even risking failure.” The irony of political discourse in the theater is that sometimes it should, in its regular state, stop, despite the tired battle cry of “the show must go on.” Sometimes it shouldn’t. Sometimes, there is necessity in slowing, in consideration, in assessing the distance between values and culture.

Contorting their performances into craggy imitations of their first-round, but imbued with the gravity of people trying, despairingly, desperately, to do right and understand, they move through the same play with a different story. Generosity and disrespect look identical at this point as the Cast moves past the confines of the original text, undoing death and then themselves. Equally admirable and disgusting, they distort their own work and the Playwright’s into a rough sketch of something containing more meaning, only to diminish themselves into a waking death. Unsatisfied to let us dwell in placidity, we are juggled between fiction, non-fiction, then fiction again and placed as spectator-performers who, through observing as ourselves instead of an anonymous crowd, participate.

There is a small notion of artifice that I can’t kick from this show; that the circumstances, so arranged by a playwright and director, ends up being something adjacent to a morality play, throwing down judgment. These misplaced intentions lead to consequences and can you stomach those?

But the play is not the story, right? A story is too complicated, too circuitous, an ecosystem of consciousness and metaphor and flesh. Meaning is not derived from any single component; it’s the interplay, the motion between geography and bodies that allows us to arrive at meaning. My morality and values do not allow the play to be approached in the same way. A map is, after all, only a record of features somebody thought significant enough to record and a play is only a record of events.

“KISS” is a feat of theatricality and politics, using the popular perception of theater to entertain us, then engages our emotions in the artificial Real built from the remnants of a play, exploded with its terrain. We can leave the theater, but we can’t leave the world.

The Syrian Civil War, though, continues. Airstrikes from Syrian and Russian aircrafts kill civilians and children daily. Between July 17th and 27th alone, 103 civilians have died. Since April, over 400, while the total number of displaced people is over 5 million.

Meanwhile, the Syrian Civil Defence (also known as the White Helmets) perform volunteer rescue and medical aid to non-combatants. They have also been the target of government disinformation campaigns. If you’d like to learn more and support them, you can do so here. For a brief primer on the Syrian Civil War, you can read the BBC’s coverage here.

To find more information about “KISS” and Haven Theatre, you can follow this link here

Featured image: The cast of “KISS.” From left to right; director Monty Cole sits on the arm of an olive green couch, with his hands on his thighs facing us. He wears glasses and a blue checked shirt. Cassidy Slaughter-Mason stands in front of the couch arms at her side. She looks up and to the right. She wears a leopard print tank top and blue denim jeans. Her shadow grazes Salar Ardebili who sits on the couch staring out to the left. He wears a blue shirt and black pants. Arti Ishak sits behind him wearing a pink and brown floral dress, looking out to the left. There is a hanging lamp behind them, a door to their left, and a kitchen sink behind Ishak. Image courtesy of Austin D. Oie.

Persephone Jones is a writer, theater maker, and visual artist whose work focuses on the interaction between fiction and non-fiction; names and events as well as the contours of dreams against the material. They’re a contributing writer at NewcityStage and have worked with the Neo-Futurists, Facility, the Prop, (re)discover and TUTA.