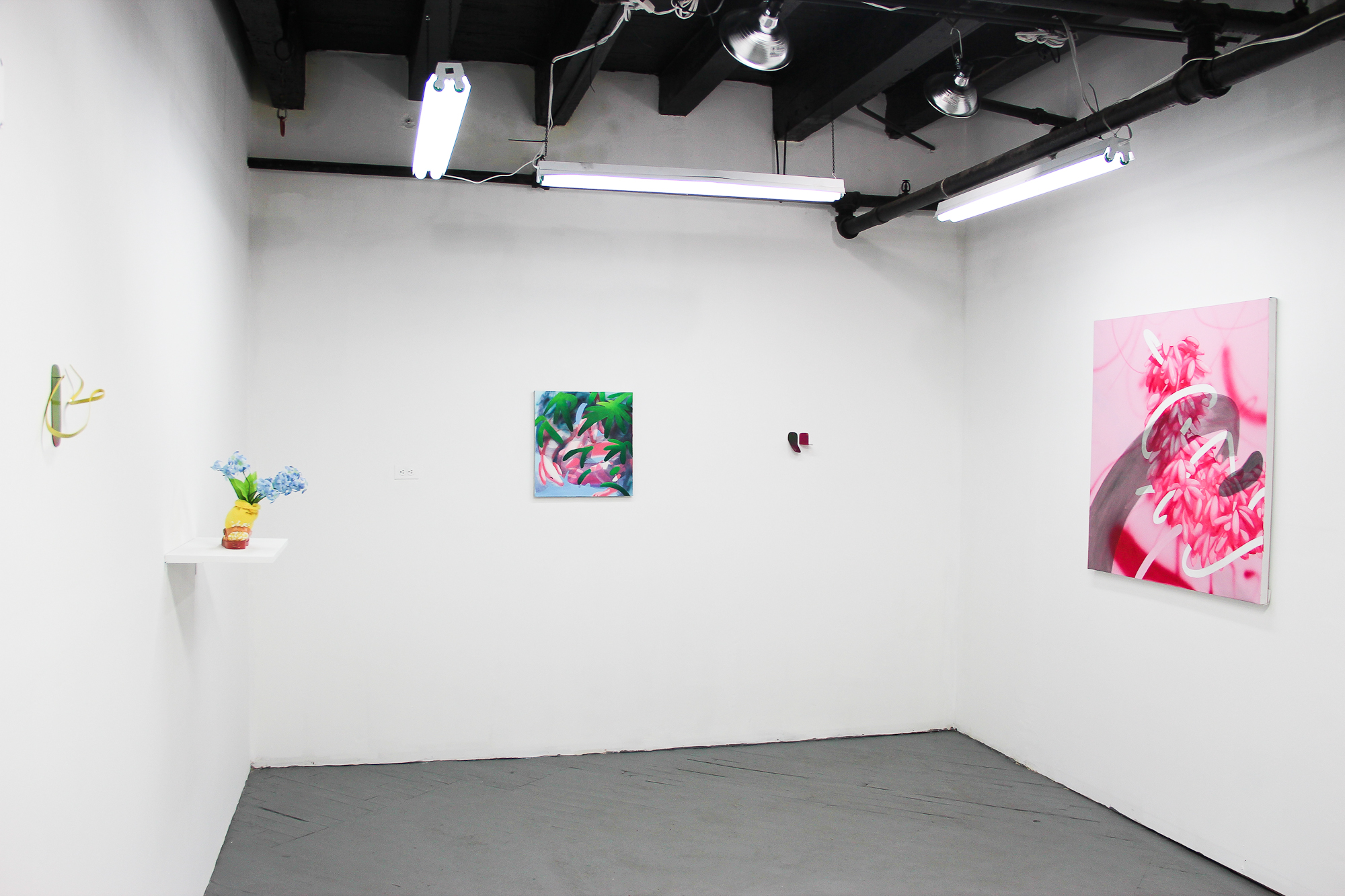 The child is grown, and puts away childish things.

Childhood is the kingdom where nobody dies.

And the artists at Baby Blue Gallery, Traci Fowler, Alex Bach, and Carmen Chaparro are immortalizing feelings of youthful desires and fleeting moments in our memory.

Baby Blue Gallery is run by Caleb Beck and located in a warehouse space in the Pilsen neighborhood. With early beginnings in his apartment, Beck highlights young emerging artists rather than focusing on a profit-motivated commercial gallery.

When Beck first saw Carmen Chaparro’s work, he knew that he wanted to exhibit her work in a show at Baby Blue. Including Alex Bach and Traci Fowler, the exhibition, “I want to be pretty until i die” features the three-person show of  paintings, sculptures, and assemblage pieces that touch on themes of nostalgia, humor, kitsch, and summer.

The shows intention opened at the beginning of Chicago’s warm weather, when paintings like Chaparro’s pink pool toys were a soon-to-be reality for many of us who braved another cold winter. Chaparro is originally from West Palm Beach Florida where her family had a home on the beach, and where her work draws inspiration from. Her previous and older body’s of work focus on themes of privacy and vulnerability as she includes figures bathing on the beach, propped in chairs, or lounging poolside. Like a voyeur, Chaparro took these themes from her real life experiences in Florida. “We would live on these canals that would put the neighbors across the way on display. There was no privacy,” she explains. Courtesy of Baby Blue Gallery. Piece by Carmen Chaparro. A square shaped canvas with baby pink dogs and green leafy surroundings take up the right and top side of the painting.

“In these few newer paintings it’s a bit of a derailment. I’m thinking more about objects as figures,” although she’s still thinking about her home-state when making these works. Hues of pinks, greens, and blues, make up the paintings which largely resemble inflatable pool toys or kitschy items found littered around a body of water after a hot summer day.

The lines in her work complement the steel wall sculptures of Alex Bach, whose pieces appear like wisps in the wind, or scribbles on a wall. Bach’s work is also color heavy, as his interest of hot, neon colors are similar to the work of Chaparro and Traci Fowler.

“They’re funny and slick,” says Carmen about her utilization of the dog pool toys she’s been depicting in her works. “There’s been a fair bit of material investigation which leads to the aesthetic outcome of the pieces.” Courtesy of Baby Blue Gallery. On the left side is a painting by Carmen Chaparro which features blue abstract lines. To the right is a small steel sculpture made by Alec Bach that is green.

Anchored to the walls are the steel pieces in the show that are inspired by digital drawings that Bach has completed on his iPhone with his finger. Bach wondered, after creating pieces on his phone and how they would look as  “three-dimensional/tangible objects.” As a result, he curves and manipulates the material to mirror the digitized lines and shapes. “The powder coating process allowed me to access those bright colors produced by the phone. Along with accessing these colors I was also able to give each piece an attractive candy like finish,” he says. Courtesy of Baby Blue Gallery. Two sculptures by Alex Bach which are made from steel. One is located on the lower portion of the wall and protrudes from the wall. There is another piece on the right upper hand side of the image that has a bright yellow shape.

For the pieces at Baby Blue, the thin lines and sliver of steel are powder coated with vibrant colors. He says that he is most attracted to hot pink and lime green at the moment.  “There is just something so satisfying to me about turning a screw pink.”

Additionally, Bach finds pleasure in taking certain materials and including them in quick and various processes to look at change and manipulation. In his time living in Chicago, he frequents the CTA which has had an enormous influence on his practice. Spending so much time on his phone, riding from destination to destination, he wanted to continue the discussion on how smartphones can be integrated into conversations about art. “I feel the Smart Phone is the symbol of the current times.”

Where Bach is working between transit stops on the CTA, Chaparro takes a considerable amount of time working on paintings. She writes, “I’m usually layering oil on acrylic and vise versa so a lot of time is needed between physical layers of paint,” which gives her the ability to think between each movement and each stroke. Courtesy of Baby Blue Gallery. A painting by Carmen Chaparro that has a red background. A pink pool toy, loosely resembling a dog takes up the majority of the composition.

Traci Fowler, currently located in Texas, is attracted to cheap materials. “I love dollar stores and flea markets their my heaven. I like the bright colors they remind me of childhood or thrift stores or garage sales or my own attic.” For all three artists, color is a clear drive in the narrative of their work. Courtesy of Baby Blue Gallery. Works by Traci Fowler. A shelf on the lower part of the image holds a leg-like shape that is yellow and pink. On the wall is a hanging with a half-finished rainbow and sun. A small key-chain hangs that says, “U Go Girl.”

Fowler explains that in this particular exhibition, a recurring image is the “hospital sock,” which touches on themes of disability culture, chronic illness, fitness, and their childhood. Fowler explains that selected design and color are what are left up to them as an artist. “The selection of the object itself is an often quick but well thought out process for me. More often than not I choose what I’m gonna work with and it falls into place after that.”

In conjunction with the work of Chaparro—her pool toys, slick and slippery—Fowler’s work drips of nostalgia. They explain that their intention in their work is to bring to light disability. “I mean, I guess my intention with my work is to express myself, a fat, queer, genderqueer, mentally disabled and chronically ill person using humor and a little bit of kitsch. And hope that that work could possibly be important to someone else. And I think it is, which is so cool! And this is just personal opinion but that by speaking from such a specific perspective makes the work more relatable in a weird way and that’s what I want and that’s the response I’ve been getting so that’s what I’m going to keep doing.” Courtesy of Baby Blue Gallery. Two pieces by Traci Fowler sit on a shelf. One is a yellow bell (the kind you ring on a desk) with a winky face painted on it. There are pink artificial flowers sticking inside of a Aquafoam holder with the words “See You Next Week” written on it in white.

The works in Baby Blue are a carousel of hues and shapes that nod towards youth and playfulness. Though signaling death in the exhibition title, the artists are defiantly illustrating a dreamboat of color and kitsch.

Featured image: Gallery photograph of  three walls of the exhibit. On the left wall are two small yellow and green metal sculptures. Hanging on the far wall is a pink and green painting. On the right wall is a larger pink painting with a grey streak running through the middle. Courtesy of Baby Blue Gallery.