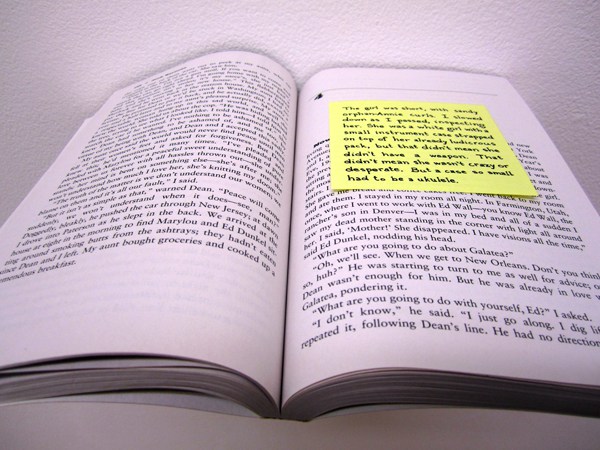 Honestly, people don’t like to read in general. Art, specifically? From Jenny Holzer’s aphorisms projected throughout New York City to Kay Rosen’s recent Go Do Good installations in Chicago’s Loop, text-based art tends to grab viewers’ attention due to its relatively brazen nature. Contemporary art that is purely image-based is often met with objections of “I don’t get it,” or “Well, maybe the artist statement will explain this.” For those in search of a quick answer, text can provide that instant gratification.

The written word, however, doesn’t always make things simpler, as Western Exhibitions’ latest show illustrates. With pieces that extend beyond the short phrases pervasive in contemporary art—guests are invited to peruse full-length novels, among other items—People Don’t Like to Read Art stretches the function of the gallery space and explores ways in which one can establish a more intimate connection with art.

After attending the exhibition’s opening reception on July 9, I spoke with gallery director Scott Speh about the show and asked the artists for further insight into their works.

People Don’t Like to Read Art runs through August 13.

Jenny Lam: How did you come up with the idea for People Don’t Like to Read Art?

Scott Speh: It stems from the title of one of our artists in the show, Deb Sokolow. One of her pieces from a couple years ago humorously looked at the issue, especially as related to some experiences she had in grad school with painting professors who felt that looking at her work was like looking at homework. And so she made a drawing that kind of made light of that issue, considering that her work is almost all text. And then I have a number of artists on the gallery roster who work with primarily text, like Joe Hardesty and Nicholas Frank, and John Parot, who at times uses a lot of text in his work. So I wanted to incorporate their work into the show or take their work and contextualize it with some other artists who were doing similar things.

Joe Hardesty on his Laurel Canyon piece: “The drawing in the show is based on a woman I met and spent one afternoon with here in Los Angeles last year when I first arrived. The brief period I interacted with her has inspired several drawings that, when viewed together, loosely create a larger narrative. The larger story addresses themes including confusion, loneliness, solitude, sex, aging, longing, death, medical marijuana, loyalty, and nature in the urban environment.”

John Parot on his collages that reflect modern gay life: “Using text in a majority of my work, I have always dreamed of a show with this common thread. This is one of my favorite pieces, as I had decided to create my own zodiac chart based on people I meet in bars and other social arenas. Like constellations that litter the night sky, so do the people in the city I meet when I go out at night. I love engaging my audience, both with visuals and text. The challenge for me is how to use image and information [not only in] expressive and delightful [ways], but also as equals.”

JL: Have guests been actually taking the time to read the work, or have they just been breezing through as is the case in many gallery and museum shows?

SS: The show’s only been open a day and a half, and at openings, people don’t look at work that much anyway, so I don’t know what was going on at the opening. So I don’t have any data on that yet.

JL: Are there any specific works that are personal highlights for you?

SS: I feel like it’s kind of like a Sophie’s Choice kind of situation. Sometimes you do a show and you ask an artist to be in a show and they send you whatever they have or they give you a selection of things, so some I did make a conscious decision to include in the show, but I really am excited to be able to show Simon Evans’ work. I’ve followed his work for a few years, mostly through art magazines and art fairs, and he shows in New York and Berlin and has a bunch of work coming up in the Istanbul Biennial. So I’ve always wanted to show his work in some context, and this pyramid piece is a weird, funky, hilarious, fascinating piece, but I also thought it would be nice to have some sculptural element in a show that could be primarily flat work or book work, so I thought I’d give the show some nice diversity.

JL: How did you find and select these artists?

SS: A few are local artists, like David Leggett or Elijah Burgher, who I’ve been following for a while and seeing them at other shows and galleries and wanting to include their work in something somehow.

David Leggett on his drawings: “The work I have in the show is from my blog. It’s a daily drawing project. Every Tuesday I take requests from people and draw what they ask. I like how fast I have to work on the drawings. […] I hope people see the humor and the thought process in the work.”

“List Show” and “Where They Do That At” by David Leggett at the “People Don’t Like to Read Art” opening reception. July 2011. (Image courtesy of Jenny Lam.)

SS: Some artists like Andy Moore had this awesome 500-page artist book/painting/sculpture object that had showed at Gallery 400 last year, and so we’ve been showing this at our editions and art book fairs, so I wanted to re-show that. It’s a piece that demands to be re-shown, because with even a significant amount of time in a gallery, it’s going to be nearly impossible to digest, because it’s a novel, basically.

Some people were suggested to me, like Angie Waller. Mark Wagner’s an artist I work with. He suggested his studio assistant Cat Glennon to be in the show.

Kirsten Stoltmann is an artist who lives in L.A. She used to show here in Chicago with Gallery 1R and Van Harrison Gallery. Her career’s doing pretty well and I’ve always liked her and liked her work and thought this would be a good opportunity to show that.

With Meg Hitchcock, I was just doing research online for some other things and came across her work and found it really beautiful and amazing. I show a lot of artists who work with collage, so I thought it really fit in with my sensibilities.

And then this book by Rebecca Blakley, On the Road, where she puts her own meta-narrative on Post-It notes into the narrative of Jack Kerouac’s On the Road. I saw this book at the NADA Art Fair last year and purchased it, and I’ve just been enjoying this at home.

JL: Western Exhibitions began as a portable art gallery. How was your experience running it without an established space?

SS: Hard and kind of stupid. But at that point I didn’t have a physical space to do a gallery and for some reason I wanted to do a gallery, but couldn’t afford to do a bricks and mortar thing at the time, so that was my best solution for that.

JL: What led you to start Western Exhibitions?

SS: I’d moved to Chicago and had a bunch of friends living here who had kind of exhausted their experiences at apartment galleries at the time around 2000, 2002. I was getting tired of my own studio practice and wanted to give artists another possibility beyond the apartment situation to a more commercial situation. So I, not knowing anything about how galleries work or about the business of art, just kind of jumped in.

JL: Do you still do work yourself?

JL: Why did you make that switch?

SS: I was bored with my own work, with being in the studio, and my creative soul is just as satisfied putting on shows and working with other artists. And I thought if I was going to do a gallery, it would be a real conflict of interests to try to hustle other people’s work and my own work at the same time.

JL: Living in Chicago, what’s your opinion on the local art scene?

SS: The Chicago art scene is great because there’s always an influx of artists with the art schools, and then the artists who stick around have a lot of depth into the ecosphere. The great thing about Chicago is that, as far as a major metropolitan area, it’s a cheap place to live, so you can take a lot more risks and possibilities without having to worry so much about covering your overhead, or your overhead is easier to achieve on some level.

JL: Where do you see Western Exhibitions in the near future?

SS: Continuing to put on shows and do art fairs and get our artists into good collections and improve their careers

JL: Is there anything we can look forward to at Western Exhibitions in addition to this show?

SS: In September, we’re showing Stan Shellabarger. He is a performance artist and bookmaker whose work deals with issues of how the body relates to the earth, and he does a lot of endurance performances that accumulate a series of marks, either walking or dragging your hand on the surface, or even breathing. He does them to such a ridiculous extreme that a number of marks builds up, so it becomes this alternative way of drawing. So he’ll show some artist books, and some photographs based on performances in the main room.

And then in the small room, Maria Petschnig is an artist from New York by way of Vienna, and her work, on a very cursory level, is about voyeurism and alternative means of presenting yourself sexually. So she’s going to do an environment that will include video and photography that will make use of these costumes that she makes for her body. The way they’re presented and stretched and the way she crops the photographs of these costumes almost become abstractions of the body, but they’re very painterly and colorful. And then the videos look at how people present themselves as sexual beings, and they invert the male gaze, but they’re not necessarily judgmental; they’re open for interpretation.

More information on People Don’t Like to Read Art here.

Jenny Lam blogs at Artists on the Lam. Her Twitter handle is @TheJennyLam.