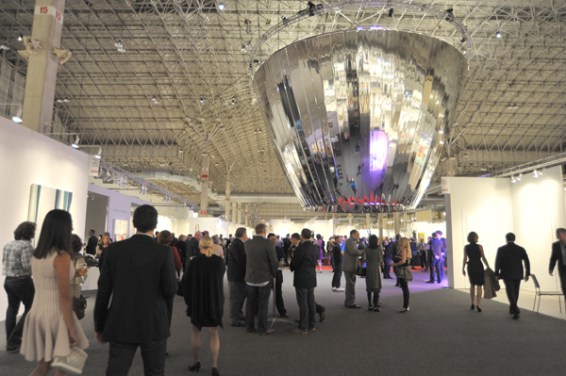 Last month, about a week before Expo Chicago: The International Exposition of Modern/Contemporary Art & Design opened, I sat down with Tony Karman, Expo’s President and Director, for a preview of the inaugural fair. It might have been easy for some to dismiss those early superlatives as simply hype, but once the exposition launched and Festival Hall opened its doors, it became clear that the praise was warranted.

The cavernous setting at Navy Pier; the innovative interior environment designed by Studio Gang Architects, under the leadership of MacArthur Fellow Jeanne Gang; the presentation of leading international galleries; and the wide-ranging roster of special programming all contributed to a most impressive undertaking.

But just how did the fair… fare? A week after its conclusion, I caught up with Karman to find out.

This is a post-fair follow-up to “Expo Chicago // An Interview with Tony Karman.”

Jenny Lam: Expo Chicago was quite an accomplishment. The Vernissage was stunning.

JL: So you would say it was a success?

TK: Surely. I think that it’s an incredible foundation to build upon. No fair is “right” the first year—some fairs aren’t right for several years—and I think that that’s a natural maturation process, but I think a lot of things fell into place in an extraordinary way. The civic support, the institutional support, the collector support, the finish, and the work with Jeanne Gang which we will do again… all of those things give us an extraordinary foundation to continue to tell the world that their calendars should be marked every September.

JL: How were the sales?

TK: Sales were very good. There were several large-scale pieces that were announced, there were a lot of solid sales on the weekend, and there was a lot of work that was sold, at a varied range of prices. I think that we’re pleased. There are a lot of factors that can affect success: the sheer, where we are in the economy, or election cycle, who comes, but I think that the sales were strong. Like any fair, some dealers will do very well, some will do OK, and some won’t do well at all, even in boom times. That’s the way it breaks down. I’d be a lot happier if everyone sold out their booth, but that never is going to happen in any fair at any time.

We want greater regional collector and institutional outreach, support, and presence, and we want greater national and international collector, curator, and institutional attendance, and I think that that will come with the next few years as the fair continues to present itself in the way that we did this year. Word of mouth is the strongest bit of advertising, and there’s not a collector, curator or art enthusiast that came that didn’t leave that venue with extraordinary respect for the work that was shown and the way it was presented, and I think that bodes well for us.

JL: In terms of attendance, how was the representation of global collectors?

TK: Those metrics aren’t in yet. I think that we will have more information in subsequent weeks and months. We’re posting an attendance figure of 27,000. I think that’s a fair figure. That includes both the opening night as well as the four days. There was strong regional support, but there could be more. We weren’t expecting to draw a massive global audience; no one could in the first year. But I know that we did have a number of collectors and individuals that did come from out of the country, and I think that we’ll have more in the future.

JL: What would you do in the future to draw more global collectors?

TK: We’ll stay the course in quality not quantity, and in exhibitors we’ll stay the course in building greater alliances with our institutions like we did. Having two exhibitions aligned—the Allen Ruppersberg and Jeanne Gang at the Art Institute—was extraordinary, and I would hope we could align more. I know there are discussions with several institutions to see if that could happen. That would be a big help.

We have a foundation that’s built, and now we can tell the world what we are, and what is happening, whereas we didn’t have ten months to tell the world last year. That’s going to help a lot.

Working closely with the city, Choose Chicago, the bureaus, working more closely with the consulates and their connections, greater outreach to cities and galleries and institutions throughout the world—I’m doing that; I leave for Frieze and FIAC next week.

All of that adds to global participation.

JL: I thought the branding of the fair was interesting because it was very distinctly Chicago; there were even Chicago-style hot dog stands. Is that something you’re going to keep?

TK: On the opening night, that was very much a Vernissage, MCA presentation. There were no hot dog stands those other three days. Not to say I don’t like hot dogs. Yeah, I think that a fair has to be both global as well as local, and I’ll always want to infuse the experience with something that is pure Chicago. I have to. That’s, after all, why we’re here and what we should herald. So yes is the answer.

JL: Do you plan on keeping the same scope, same number of exhibitors?

TK: Yes. It’s my intent to absolutely keep the same size. The layout might change a little bit but not dramatically, that’s the beauty of the second year is you know what worked and what didn’t work, but in so many ways, what we accomplished feels right to all of us, there’s not a lot of wholesale massive changes to make. I’m talking about the floor plan, /Dialogues, or IN/SITU… all of those programs that were nothing last year and were just in our minds. Now they are realized and can be refined.

I’m really excited for the second year of /Dialogues. I think it was an extraordinary group of discussions. It was a very full program of panels with the support of the School of the Art Institute. We expect that relationship to renew and grow, and I think that there will probably some new additions to the speakers. Having Jerry Saltz be the keynote and kick it off in the rousing way that he did was extraordinary. We’ve got to look for next year’s extraordinary.

Now we refine what we are—not create. And I think it’s a great place to be in that regard.

JL: What’s your vision for the future of this fair, both next year and in the long run?

TK: I think that we continue to build a collector base that marks their calendars for September, and deepen our linkage with the institutions. I’d love to see a full-on alignment with both the Art Institute and the MCA with mega exhibitions. I think that there’s a whole host of ways in which we will all benefit when the fair happens.

My vision too is we serve the greater ecosystem of Chicago in a way that there’s even more involvement with those that come to our city and those that go out and see galleries, performing art institutions, all of it. I think that this Expo week of activities generates a wonderful umbrella for a lot of companies, artists, institutions, galleries, etc. to provide programming that makes it a great experience. I know that the CSO Muti concert that took place during the fair—that kind of collaborative effort is a reason for someone from a Lincoln or St. Louis or New York or Kansas City or wherever to come to our city, and I’m hoping that more collaborative programming can be heralded. So it’s a big week for the arts in Chicago. That’s a bigger vision. I think that there’s a lot more that we can do to foster that.

JL: What is your next step?

TK: The wrap-up and the ramp-up occur simultaneously. I’ve been working as hard now as I did a few days before the fair and at the fair; it really doesn’t stop. My next step is making sure that we build an extraordinary gallery list again.

I think that my next steps are really looking at greater outreach; we want to make sure the whole team is focused on communicating to the regional museums, curators, directors, and trustees of those museums that they need to mark their calendars for Chicago, and that’s a big initiative for us.

There’s a lot of follow-up on a number of our sponsors. We are very grateful for the collaboration with Northern Trust this year, and we would expect to build upon that, as well as the other sponsorships that we developed this year, like Mercedes-Benz, etc. There’s a lot of follow-up that takes place just because we have to find out who wants back in and who doesn’t.

It’s an exciting time. We formed a civic committee relatively late because it was an initiative that took several months to organize. We expect to organize a civic committee meeting sometime in November and that will also help us do some broader planning. We want to make sure the exposition has a foundation within the civic and business initiatives of our city, and I think that that first meeting will open up some opportunities for us.

But the most important thing is that we’re back. Our dates are September 19-22 next year, and it’s no secret that we’re moving forward and looking forward to next year.

JL: I know people are definitely looking forward to it. The response has been pretty amazing.

TK: Yeah, and I think that that reflects our city. It’s great to have been a part of a big city effort to make sure that a fair in Chicago looks, feels, and is what this city deserves. I’m grateful for the positive response but also not going to rest on any laurels, because everything has to continue to refine and grow. It’s time for this to happen.

Jenny Lam blogs at Artists on the Lam and tweets at @TheJennyLam.