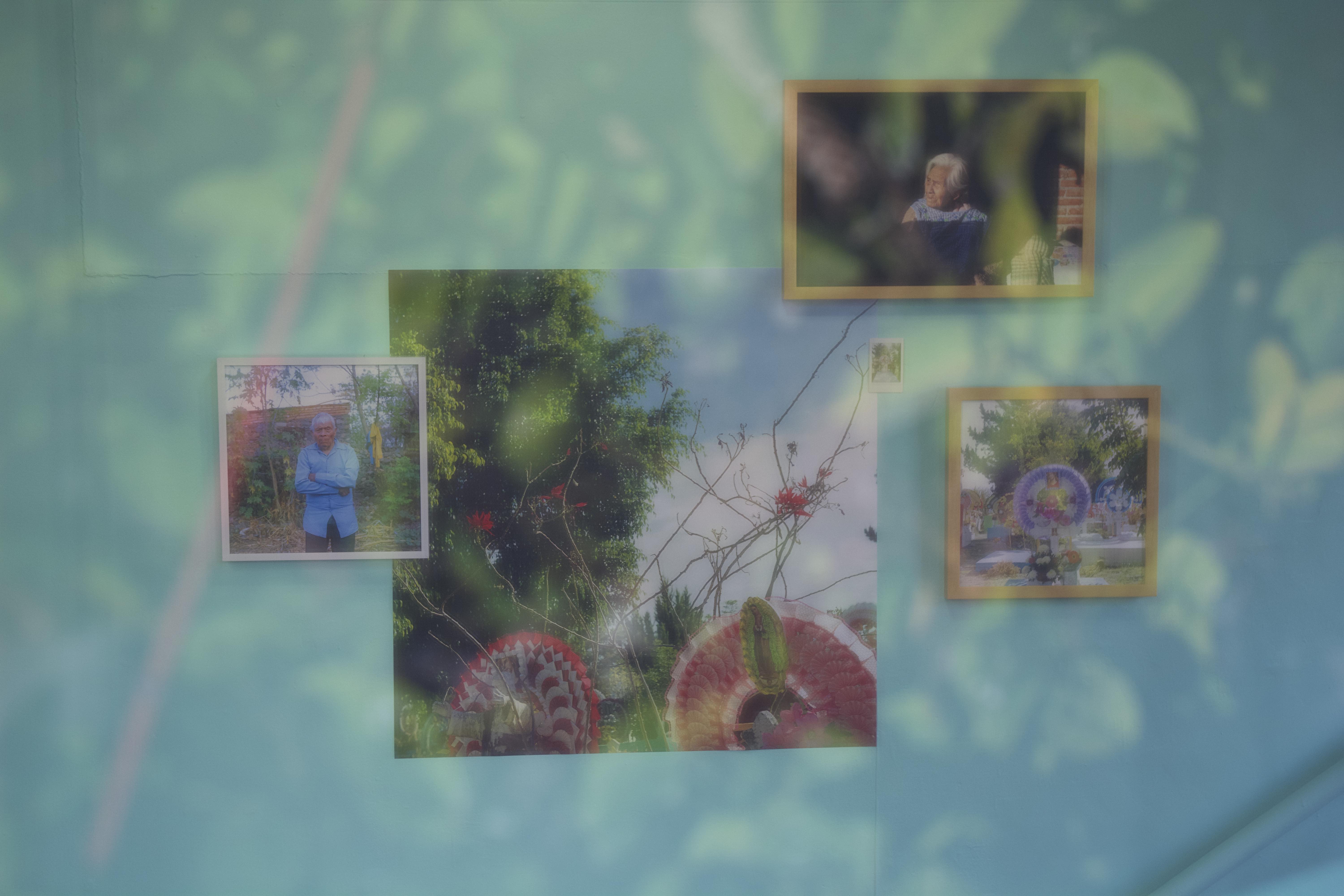 The following is a response to the show autoretrato o piel vieja y lo que sobra de una manda cumplida (self-portrait or old skin and remnants of a prayer answered) by Juan Molina Hernández, up at Roman Susan through August 3, 2019.


The stem, the leaf, the container, the echo; a body, a limb, a paper, a song. Juan Molina Hernández’s photographs repeat themselves, making doubles and triples, ripples expanding outwards, themselves like leaves on a stem. Small, a little larger, a little larger. This is a place of both grafting and shedding, of provisioning and moulting, of segmentation as a cut that pushes space for new shoots.

Rhythmically hung photographs span two walls that meet, making a larger collaged composition, a segmented backdrop to a stage of potted plants – dozens of potted plants – lining a wall of huge windows that meet the ground. The plants here are chosen from a distant index, reflecting back from the plants in the photographs: from Molina Hernández’s grandmother’s garden in Guanajuato. A tethering of source, seed, and pit to their dispersed sites and plantings. Memento mori, memoria vibrante. The artist speaks of this familial return as both an urgency and a tension, in distance and intimacy. These photographs emerge as the same, focused on the garden as in-process, as a dispersed place, as refuge and congregation. We are gathered here, in this inverted courtyard, this partial cemetery, this living room of ghostly living. There is implied possibility, for replanting and cultivation, a landscape that might make room for the collective and the interior.

The potted plants echo back to the framed photographs as things held, contained, and protected. Things of life that are portable, cared for, loved, forgotten. Things that heighten our awareness of the space between life and death, of the spectral as an active and necessary realm. Across a corner, a large photo of the artist’s grandmother looks towards the other wall, her body turned off to the left as she stands in her garden. At the end of the trajectory of her gaze, a tiny polaroid is hung, another photo of her taken at the same day and time, and here she is turned toward her other photo-self, triangulating a position where I am between her two bodies, at the meeting point of her mirrored gaze, my body now directed towards an expansive photo of her garden, a close up, a lush cascade of greens that surround me. Her doubled self has brought me here and I’m thankful, pushed to look closer at her work, at Juan Molina Hernández’s work, at the way the leaves replicate the paper of the photographic plane, like the photos replicate, like the plants replicate – a refolding, una réplica, une réplication. And, like leaves or shoots or tubers, the copies of the copies are not duplicates – they are shadows, multiplications, generations, the world.

A garden is tended, chosen, and composed, growing with wild seeds from the wind, chance, and uncertainty. Texture, colour, rhythm and scale are vital decisions in the work. It is extended in its time-based form, a generous kind of work for the bodies that inhabit it, surround it, care for it, harvest it, collect its pollen, stroke its petals, ingest its medicine in all its forms. It is an extension of and for our bodies in so many ways, and Molina Hernández works with these extensions, these graftings, in a metered poetry and a visual terrain. Their photographs overlay each other, touch each other, with some printed on paper stuck to the wall, some boxed into frames, and others produced as a celluloid polaroid: a tiny object, a recuerdo, a pressed flower, that holds itself as a future while intimately knowing its present tense. Above, like light lingerie on a clothesline, hang three digital photos printed on sheer fabrics. The first shows a face nestled in branches with a lime for an eye, the third a set of legs falling loose off the edge of a bed, both surrounded by foldings of leaves, clothes, and textiles. In between them hangs a vanishing photograph on ultra-sheer organza, a duplicate of one of many repeated images in the room: a lime tree lit in the late-day sun with a shedded snakeskin and empty firework stick crossed in the middle of its branches. Leftover containers, evidence of explosive transmutations, in slowmotion and hyperfast speeds all at once. Like a segmented portrait in three parts, the images hang soft and light, moving in the breeze that flows into the room, a rustling tableau vivant. If the line of potted plants present a stage, and the assemblage of photographs a backdrop, these three hanging images – sheer and legible only in the changing light – are the bodies in the play, speaking slow poetry to a low soundtrack of laughter and singing, looped on the tiny cellphone screen leaning on a shelf. This tiny video is a home movie, a raucous joy of jokes and embraces, a great grandmother singing a song for a child. It is the secondary play in the room, the two scripts collaged yet distinct, the garden spreading shoots from the same earth.

Moving through the space in a circular repetition, I keep thinking on return, retrieval, and risk. Of Molina Hernández’s pinpoints of both intimacy and urgency. Of the cut of colonial structures pushed on bodies, hands, hair, houses, forests, ecosystems, lands. Of hesitancy, vulnerability, and lush ungovernable growth. Of working with grafting and waiting for rejection, knowing one of them will eventually hold. I find the list of titles, and it reads in order like a simple poem, another simple script for this stage:

_
Featured Image and three other images show installation views of the exhibition space. The walls are painted a teal mint green color with photos of various sizes hung at various levels of the wall, sometimes overlapping, some photos framed, some hanging from a clothes line along the ceiling. There are live plants across the front window and mimicked throughout the imagery of the space. Photos courtesy of Roman Susan.

Kandis Friesen’s work is anchored in diasporic language, dispersed translations, and disintegrating archival forms. Working across video, sculpture, installation, and text, her interdisciplinary compositions build from architectural, material, and spectral inhabitations of exile, amplifying minute and myriad histories at once.