Nestled in a residential neighborhood in Springfield, IL is a modest white bungalow whose only occupants are visitors to the monthly exhibitions held there. The current display, a collaborative effort, fittingly titled Nobody’s Home, is the work of four St. Louis based artists: Lyndon Barrois Jr., Addoley Dzegede, Cole Lu, and Catalina Ouyang. All that separates the artists’ home city and the DEMO Project venue is 100 miles and a single state line, but they bring with them a collective inspiration with roots far beyond the Midwestern region. Accompanying their work is an excerpt taken from Finnish illustrator and writer Tove Jansson’s children’s book The Exploits of Moominpappa (published in 1950):

Images, both literal and figurative, are borrowed from the storybook page and used to transform the venue. As Jansson’s characters tumble into the foggy garden, fog spills through the open doorway of DEMO Project. Adding to the sensation of exterior space is the smell of cedar wood oil that fills the room as densely as the mist.

Wading through the thick air of what was once a living space, you stumble upon a small table-like setting. On a white, fabricated form rests a primly folded cloth napkin, a scattering of flower petals, and a transparent vase holding an arrangement of flowers and tall grass. The domestic signals invite you to imagine the familiar practice of sitting down to a meal, but they are interrupted with a subtle whimsy. One end of the table is shaped into a pair of pointed ears, and closer examination of its roughly textured surface reveals a pair of oblong eyes. The cartoonish face, modeled after the protagonists of Jansson’s book series, injects an ordinary circumstance with an element of the fantastical.

A short but uncertain journey across the shrouded interior is rewarded with another discovery. Suspended from the ceiling is a dowel rod, on which hangs incrementally spaced rings of flatbread. Cooked to a golden brown, the edible material is novel and nearly unaltered, yet its utility is transformed by the insistently present “negative” space. When standing on either end of the rod, the discs begin to recede from view, until they disappear completely into the foggy atmosphere, reminiscent of the sun on the distant horizon. Within the space of a few feet is the suggestion of infinite repetition, conjuring from the page the recurrent beckon for “Tomorrow!” A tomorrow that arrives much the same as today, that is, in the disguise of the ordinary, but still with the promise that “everything may happen if you have no objection to it.” 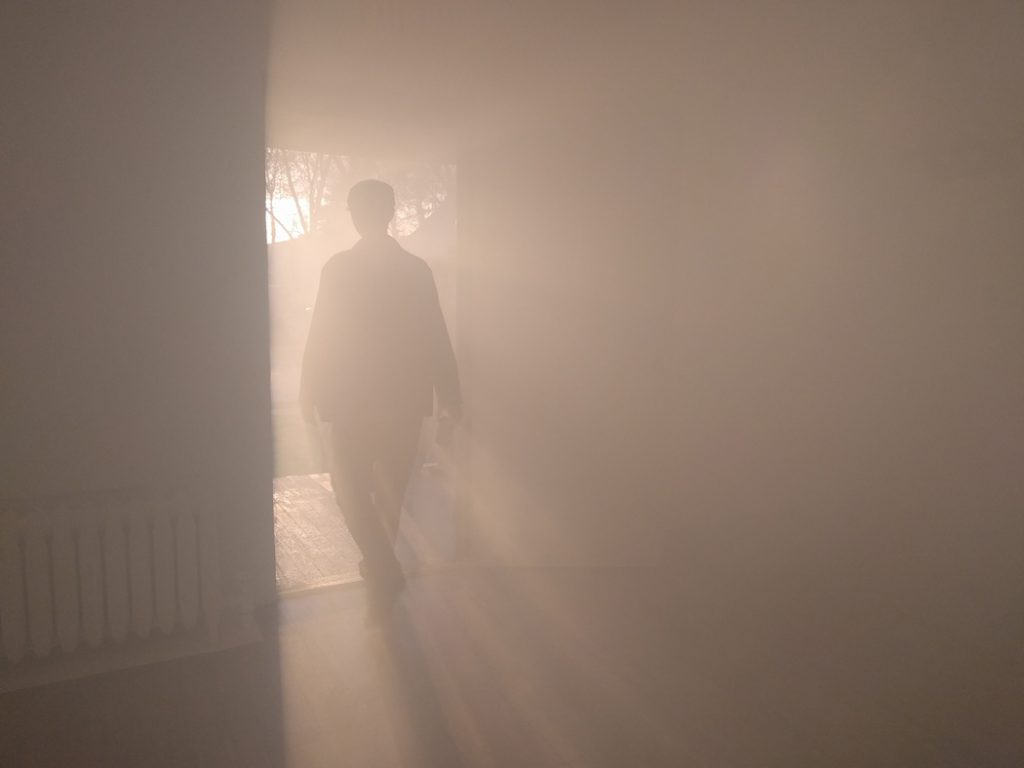 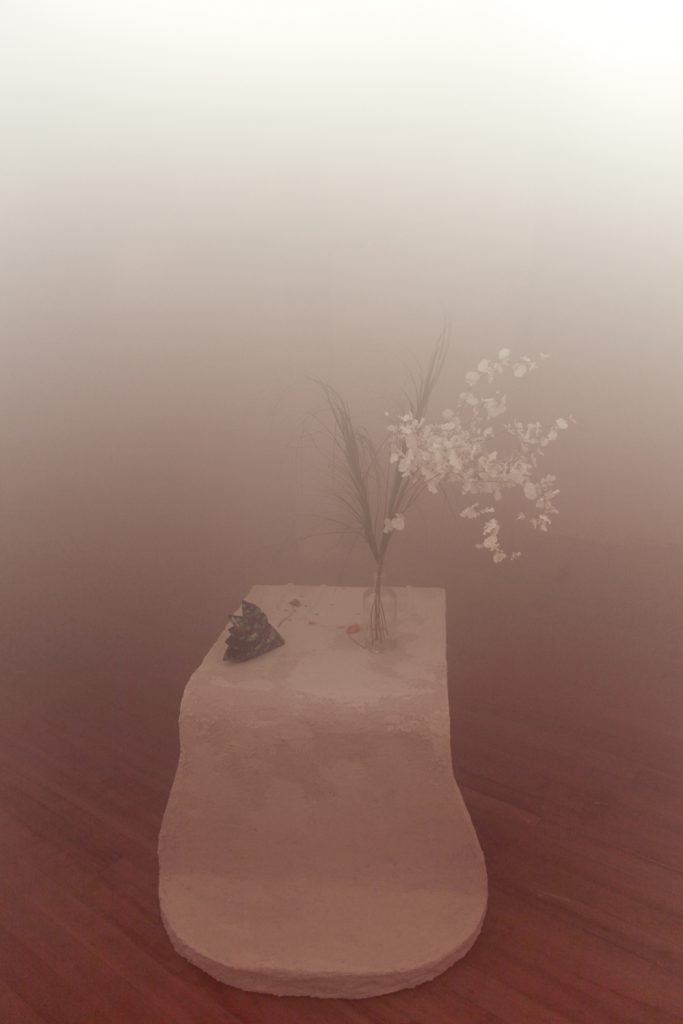 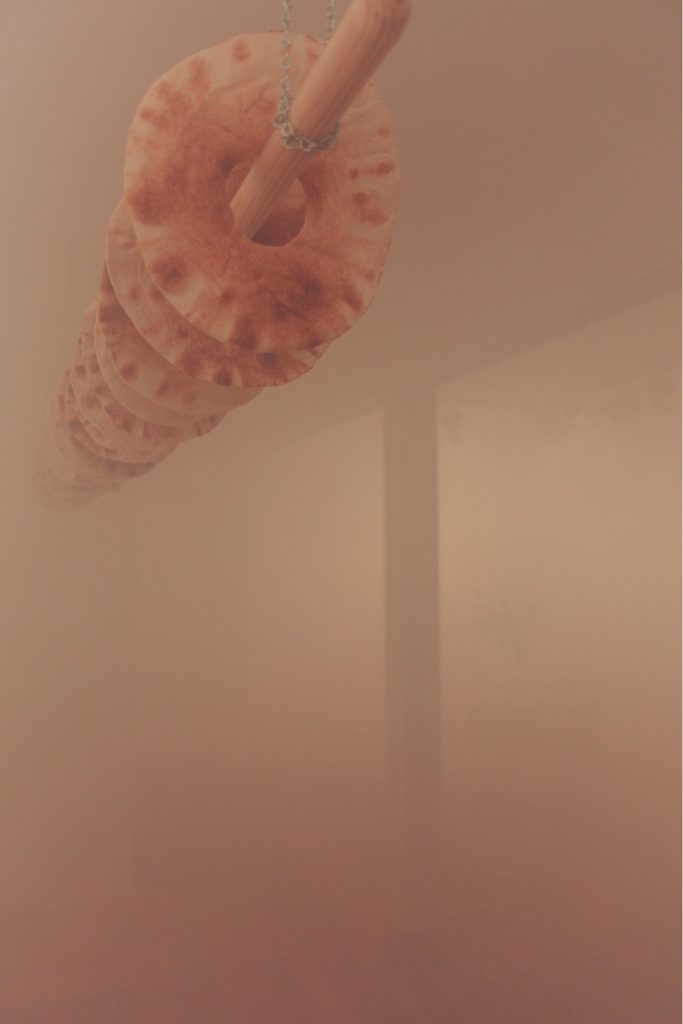 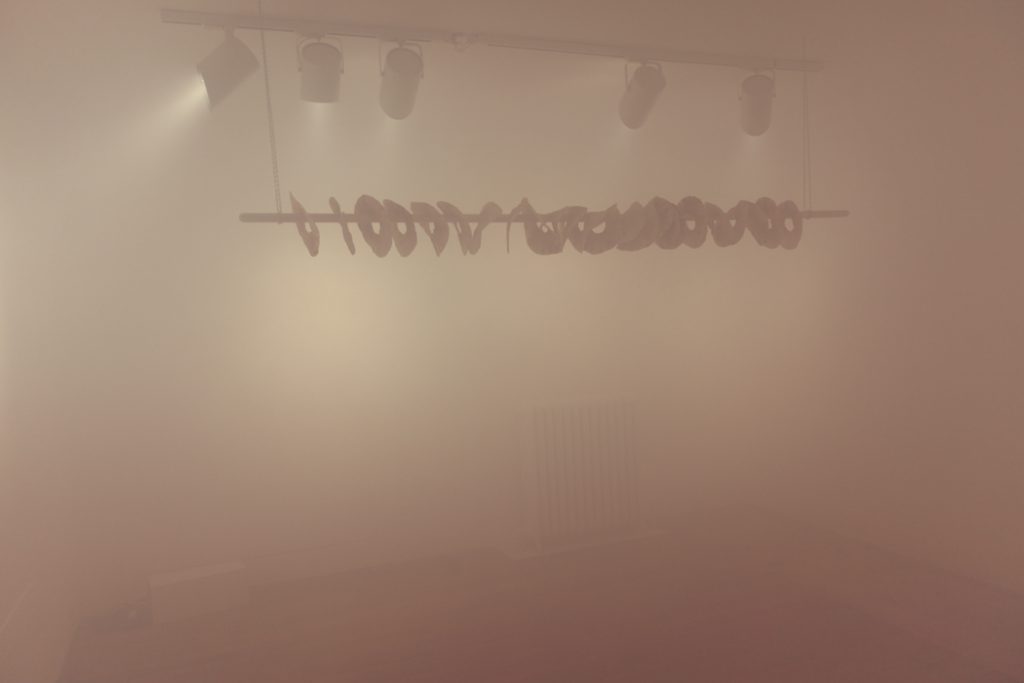 When squinting at the open-ended question of what’s three feet in front of you, it’s easy to forget that you are not alone. There are others in the room—perhaps someone on the opposite side of the flatbread sunrise—but they are only silhouettes, or the shuffling of feet. As distance is reimagined, we are taken far from the people with which we are sharing a room, and placed in the intimate embrace of a story originally written in an unfamiliar language, for an audience across the world.

In a quaint living room on 4th Street, the comfort of walls has been swallowed by uncertainty, but in its place is the borderless garden of the Possible.