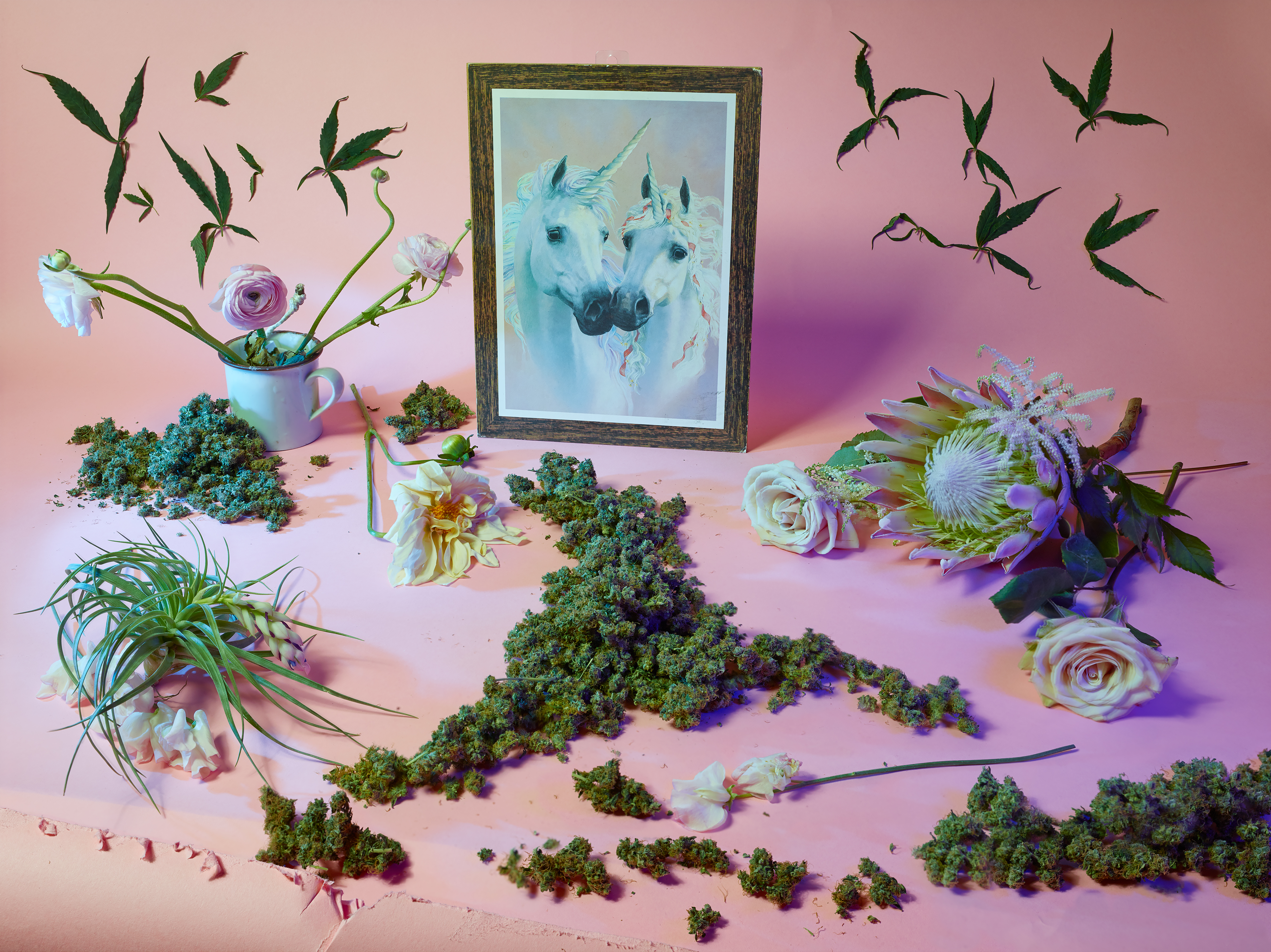 “Intimate Justice” looks at the intersection of art and sex and how these actions intertwine to serve as a form of resistance, activism, and dialogue in the Chicago community. For this installment, we talked to Marzena Abrahamik about women in the cannabis industry, friendship, and sisterhood.

S. Nicole Lane: What brought you to Chicago? How has the community influenced your practice?

Marina Abrahamik: I was born in Poland, raised in Greece, and arrived to Chicago at the end of the summer before my freshman year of high school. I went to a Catholic high school in the city for a year and then to a public high school in the suburbs. I went to Loyola for my undergrad and then attended SAIC before grad school. Having the opportunity to experience different cultures and neighborhoods made me outgoing, easygoing, and independent but also awakened a curiosity for the unknown and to love open ended questions. In a similar way, each body of work is composed of photographs that have been made not only in various locations, but also in various genres of photography: portraiture, self-portraiture, still life, studio and landscape.

SNL: I’m particularly interested in your project, Girl Play, which focuses on marijuana culture and the nude form. Can you talk about this project and the connection between the two?

MA: Both are political issues close to my heart. Pot, to me, has always been about altering your perspective and relating to others. Girl Play is a continuation of A L’ouest. In Girl Play  nakedness represents sisterhood. Our bodies are the source of all pain and pleasure and our bodies’ biology is where our freedoms start. Image: A door is slightly ajar on the right side of the image. The viewer is looking into a room where a person is lying, topless, on a couch with floral green and red cushions. The person is laughing and titling their head towards the ceiling. The rest of the room has three windows on the left side and two in the back. Photo by Marzena Abrahamik.

When I first move the the USA, I did not speak English. This lack of language made me rely on gesture and reading people’s facial expressions. I knew a few words but not much to communicate or understand a conversation. I smiled at people a lot, which at times made them either confused, feel awkward or mimic me. I  think my accent discouraged me from speaking as it would lead to questions—“I sense an accent”, or “Where are you from?” or “How did you end up in Chicago?” or at times people would repeat what I just said with an imitation of my accent. These responses turned me away from wanting to talk. That’s where marijuana comes into play. It allowed me to share an experience without having the need to communicate. Then in college I fell in love with philosophy at which point I was finally comfortable to have conversations and wasn’t feeling as insecure about my English. You can imagine what that was like: philosophy and marijuana. The conversations, open ended questions and run on sentences are endless. It gave me permission to not always have to make sense.

SNL: Can you talk about the power of female friendship and how you want your work to exemplify the importance of it?

MA: Female bonding, political solidarity and sisterhood are powerful. It’s about sharing ideas, thoughts, and dreams for our future. And it’s also about fundamental human experiences, such as caring for each other. My mother was sick for a very long time, and at different points in her life before she died I was, she was, or we both were naked together. She washed me and took care of my body in the beginning of my life when I was a helpless baby, and I took care of her body at the end of her life. Image: The photograph is a bathroom where flowers are resting on the toilet seat and next to the bathtub. A person is sitting inside of the bathtub with their face towards the camera. Plants are dangling from the shower curtain rod and another person is seated on the edge of the nude with their back to the camera. Their hand is resting on the middle of their back. Photo by Marzena Abrahamik.

SNL: Many of the photographs are staged with professional lighting. Do you work in a studio?

MA: I do. Jo Ann Callis influences my work as well as my process. She converted her garage into a studio and then the studio into domestic spaces. Sometimes I have an idea for a photograph but other times I tend to ask if I could photograph someone at their house even though I don’t know what their house looks like. In a way, I convert their home into my studio; I take over, bring my own lights, move furniture around, and light the scene. What I know is that I want to have weed, flowers, a naked body, and a color to signify the overall sensibility of the picture. In other words, I don’t know what the photograph will look like but I know what I want it to feel like. At times, in the process of photographing the meaning starts to unfold or changes completely. Though photography is about seeing, making sense of its meaning feels like finding my way through darkness.

SNL: Can you talk about your relationships to your models? Are these people you know?

MA: Making a photograph can be its own experience. Kind of like getting high in high school. Through the act of photographing, I feel like I got to know my subjects on a more human level. It’s hard to ask one out to coffee and ask them intimate questions. But taking their photograph at their home I get to go through their stuff and pull objects for the photograph such as books, mugs or even items they inherited. Now if I just randomly went over to their house and started doing that it would be perceived as rude or weird. My subjects have to give me permission not only to take over their spaces but they also have to practice patience on their day off. At the end of the day when someone does something this huge for you, it’s hard not to call them a friend. Image: The viewer is looking into a living room with a television on the left, three windows on the right, and a figure in the center surrounded by a bottle of wine, a couch, flowers, and various other household items. The sun is shining in to the window and on to the nude figure which is facing the camera. Photo by Marzena Abrahamik.

SNL: Can you talk about your work as resistance and how artwork can be a means to respond to current events and social issues?

There is a constant political battle that revolves around these subjects, ie., marijuana and women’s freedom. I hope to address the contemporary female stoner and to further understand why women’s bodies continue to be under attack. The laws that pertain to both change with the political climate. In this political climate both are at stake: the body and its biologies, marijuana and its culture.

Outlawing abortion is an attack on birth control, on a woman’s right to her life, her happiness and on various levels an attack on her relationships with others. Then there are other freedoms that revolve around our bodies: breastfeeding, breastfeeding in public, prenatal care, sex education, hormone replacement therapy, unwanted c-sections, hysterectomy. And the list goes on. This country is controlled by big businesses, and those businesses have large control over our government and our everyday life. For example, recently a pediatrician told me that breastfeeding past 6 months has no benefits for the child.  That is not true and in no way did it support or reward my mothering. Image: A figure is lying on a couch with their face half cropped. In the center of the photograph is a bouquet of flowers which is sitting on a mirror. On the right side of the image a hand is holding a green apple. A half eaten apple sits on a table on the left hand side of the image. Photo by Marzena Abrahamik.

Featured Image: Plants, foliage, marijuana, and flowers are delicately placed on a pink backdrop in this image. In the back of the shot is a framed painting of two horses. Photo by Marzena Abrahamik.