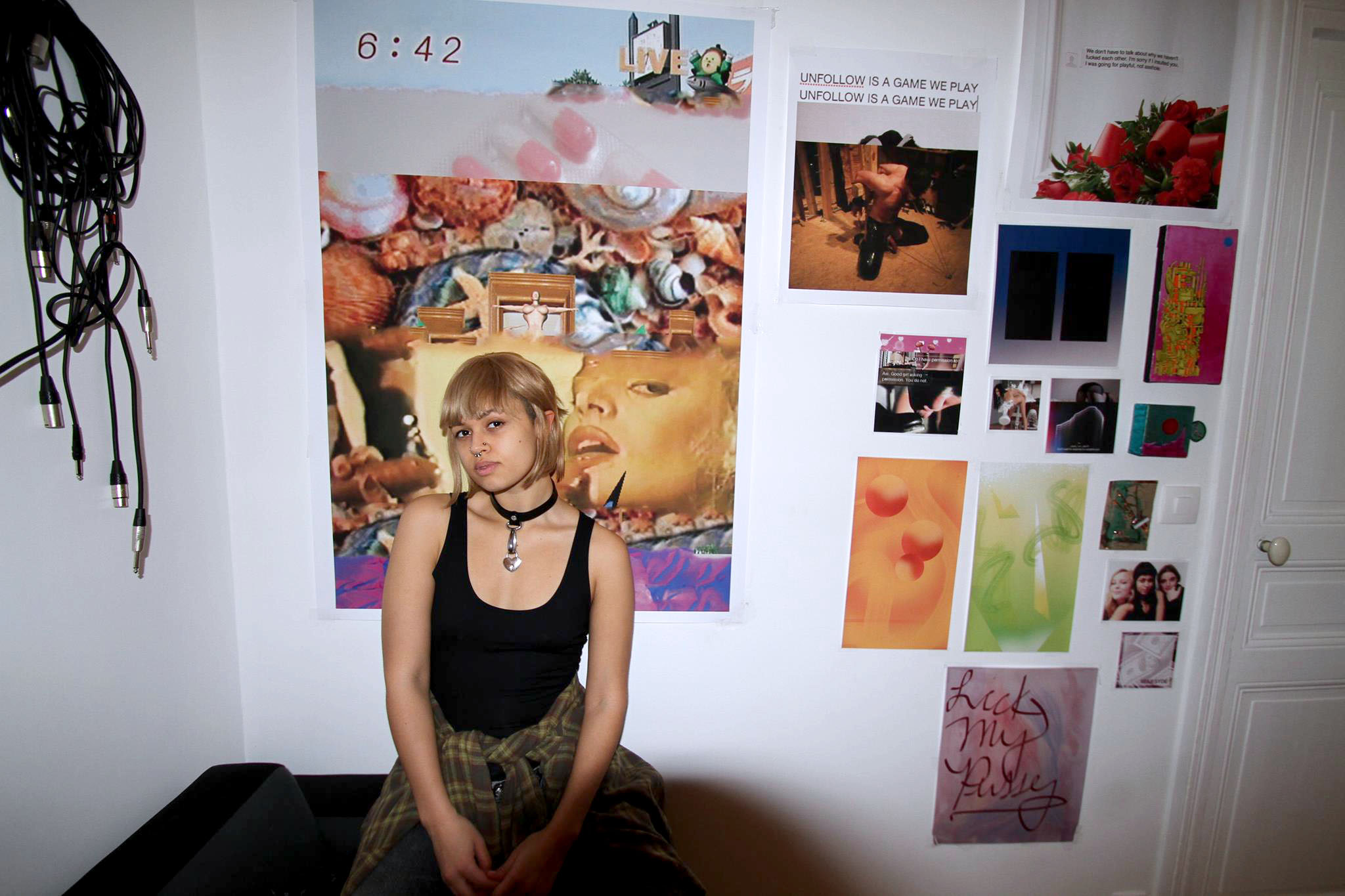 “Intimate Justice” looks at the intersection of art and sex and how these actions intertwine to serve as a form of resistance, activism, and dialogue in the Chicago community. For this installment, we talked to Shawné Michaelain Holloway via email about her practice in new media and the DIY community.

S. Nicole Lane: Much of your work explores the intersections between technology and sexual desire. How does net art serve as a vehicle for you to properly illustrate your tropes surrounding sex, power, and oppression?

Shawné Michaelain Holloway: Art in general provides me a good way to reimagine the aesthetics that surround these things. I use that as jumping off point to create a commentary about their current state of existence. Since “power” and “desire” are inherently political, people have their own associations to how they “should” experience them or how they have come to experience them before. By jamming them in the context of net art, I try to create a narrative that complicates a normative experience by pointing to one of the structures under which some folks are experiencing it. The internet is typically just a container or an imaginary substance with which they access other information; in fact, it is designed so users don’t think about its structure. So to be super reductive, I’m always calling back to the old “medium is the message” situation here. But, I think every new media artist should. Installation view from “Daughter of the Cage.” Image courtesy of Boyfriends Gallery

SNL: Do you think technology has created a disconnect for people, especially in terms of intimacy? Or the opposite?

SMH: A lot of people have asked me about intimacy in the past and I’ve never been able to give them a very good answer. I’ve come to understand that I don’t think about intimacy between two people very often. People see the sexual aspect of my work, especially the early stuff, and probably expect that intimacy is inextricable from sexuality but that’s wrong.

I don’t like feelings and intimacy in my personal life is generally intellectual. I typically think about the interiority, rather than intimacy. The awareness of one’s bodies in relationship to the screen, or even to other bodies, seems more pressing than my actual experience with them. Interiority and intimacy are not mutually exclusive though. I just haven’t really wanted to examine intimacy yet in my practice.

SNL: When did you first incorporate video work into your practice?

SMH: When I decided the physical and financial demands of making physical work became overwhelming. I’m getting back to print, sculpture, and painting now. I’m excited. Installation view from “Daughter of the Cage.” Image courtesy of Boyfriends Gallery

SNL: Can you talk about your interest in exploring power dynamics? Whether it’s sexual, intimate, or professional.

SMH: I don’t have an interest, I have a responsibility. What else is shoved in my face to respond to every day? Even if I lived in the middle of nowhere and never saw anyone, I’d still be living on land owned by someone, in someone’s country and, say if I wasn’t, I’d be contending with the power of nature which is ultimately even bigger than any of what I’m talking about.

SNL: Can you talk a little bit about your installation SUB NOT SLAVE? The installation is a re-staging of a sex club bathroom. There is a video of you placed inside of the toilet bowl. Can you discuss your interest in having the viewer look down at you? From “Sub Not Slave,” courtesy of Sorbus Galleria, Helsinki, Finland

SMH: Sub Not Slave was an experiment in a lot of things; space, performance, and minimalism. I was interested organizing the movement of my viewers by sending them to that toilet to perform a single action. That’s what one would normally do in a toilet, right? One thing. I tried to convert the meaning of a physical pissing to an intellectual one. I found that super satisfying — kinky even. I like humiliation. I wanted to see if I could make it mutual. I learned all about humiliation from Midori, a San Francisco based sex educator; it gets your blood flowing and it gives you insight into what exactly your core values are. To put those at risk produces a rise, a physical sensation; whether or not that’s discomfort, excitement, or arousal, there is generally evidence of this feeling.

I tried to play with the idea that the bathroom space is taboo. I think that’s pretty basic; poop and pee are gross and those two things are pretty much the only thing you can do there. So, I put sex in the toilet — which for some is relatively normal, I have to point out — and went from there. I put monitors all around the space to make sure you were accountable for participating in this shenanigan I’d arranged and also a little thank you in the corner with some toilet paper to make sure you knew you should feel dirty. Standing at the toilet, I guess, you could see and feel all of these objects around you.

I wasn’t physically there in the space. I was back in Chicago sending instructions to Sorbus. They were amazing and this would not have happened the same way had I been there. There was something about my distance that added to the sterility of the exhibition. I hope to work like this more often. There’s something about only showing up in digital form that makes people able to fully objectify me.

My only regret is that I didn’t cultivate more of a conversation about consent around this work. From “Sub Not Slave,” courtesy of Sorbus Galleria, Helsinki, Finland

SNL: Many of your videos are silent. What made you decide to opt out of using sound, especially with content where viewers would expect a sound component?

SMH: Yeah. A lot of my newer work is silent but almost none of my older work is. I saw Jean Genet’s “Un Chant D’Amour” and experienced the sensation of being left to contend with the emotions the moving image alone could give me. I wanted give that to others. I want you to focus but I don’t like effortless focus; it’s lazy. If you want to appreciate something, show up for it in whatever form it is in. You can decide you don’t like it later. I just want you to be fully present with my voice and fully present with yourself. There’s also a lot of text that I use. I don’t need noise complicating that direct message, really.

With that being said, I also make noise music. It’s quite the opposite method for the same result. It’s so loud that everything else becomes silent. It leaves you with no choice but to kind of shut down into yourself and contend with the sensation of tone and its smallest fluctuations. We can learn a lot about how we’re effected by vibration.

SNL: Much of your work is lo-fi, with a webcam, dim lighting, etc. Is this important to your process and how does this fit into your work as a whole?

SMH; Very important. I don’t typically use materials that aren’t accessible. I could likely light things better but I do what I can. Whatever my footage looks like is typically symptomatic of the technology I’m using. That’s another way I’m approaching the discourse between body and technology. For example, how does the HD webcam display me vs the iPhone? Where’s the reality, where isn’t it? What can I hide with one device and not with another?

SNL: Your more recent work is not as overtly sexually. Can you talk about that transition? Still from the video project “a:active a:hover or position unavoidable,” image courtesy of the artist.

SNL: You’re from Chicago. How has the community here shaped you or changed you? What keeps you located in the city?

SMH: I wouldn’t be me if it weren’t for the communities I have here in Chicago. I don’t belong to any one exclusively, but I came up through the noisy/glitchy/diy/experimental electronics scene and I’m forever grateful for the lessons they’ve taught me. I’ve grown my aesthetic but it’s heavily rooted in nostalgia for the technologies I was first interacting with while a part of those spaces.

The poets here are also incredible. My education at Young Chicago Authors as a teenager has forever impacted me. There was a class I took with Avery R. Young that fuels most of the way I relate to music and language and how these things function on a social level. All the folks that came up through YCA will forever be dear to me because the vulnerability we shared was so great. I have never stopped being that open, for better or for worse.

Sixty relies on your support and generosity. Please help keep us going by making a contribution today.

S. Nicole Lane is a visual artist, writer, and editor based in the South Side. Her work can be found on The Establishment, HelloFlo, Newcity, Bustle, and other corners of the internet, where she discusses sexual health, wellness, and the arts. Follow her on Twitter.