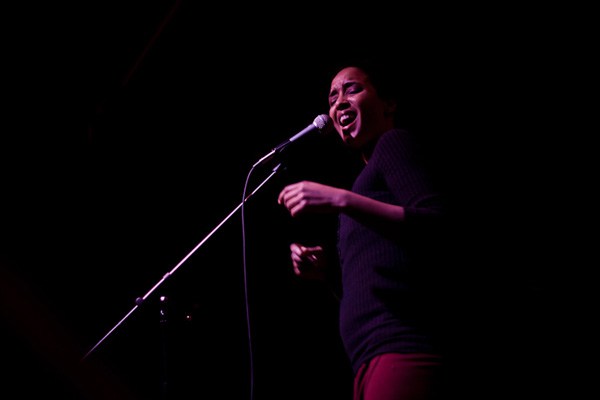 Presented by Elastic Arts and AMP-CHI, Intersections is a new series featuring musicians from the Association for the Advancement of Creative Musicians and from Asian Improv Arts Midwest. On April 2, I attended the first performance of the series, which showcased East Meets West’s Kenneth Green on keyboard and Dushun Mosley on percussion, in collaboration with vocalist Mankwe Ndosi.

Before the musicians began, Dushun told the audience, “Chaos is only in your minds.” Though the improvisational performance was anything but chaotic, it certainly was unlike anything I have ever experienced. While Kenneth and Dushun played off each other, listening to and responding to the slightest of changes in rhythm or melody, Mankwe pushed her voice to its boundaries, sometimes falling into a soft whisper, sometimes rising to a haunting wail; sometimes guttural, sometimes shrill. She alternated between wordless song and text read from a book of poetry. “No you, no me,” she chanted at one point. “No distance between us… just energy.” That night, there indeed seemed to be no distance, just energy, among those on and off stage. While the three musicians integrated the old with the new, the inorganic with the organic, the captivated audience nodded along with the beat and punctuated the performance with cries of praise. Music, spoken word, art, and community all intersected.

I chatted with Mankwe and Dushun after the performance. Below are a few excerpts on improvisation, the importance of supporting local musicians, using the human voice as an instrument, and drawing vocal inspiration from whales.

The series continues on April 16 with the Saalik Ziyad Collective, May 7 with Hanah Jon Taylor Artet, May 14 with Tatsu Aoki and the Miyumi Project, and May 21 with Jeff Chan and the Chicago Clarinet Conglomerate. All performances begin at 9pm at Elastic Sound and Vision Gallery.

Jenny Lam: How long have you been doing these kinds of vocal performances?

Mankwe Ndosi: Ten years, since 2000. I started playing with Dushun [Mosley] and Douglas Stewart in Inventions at the Velvet Lounge.  I was doing experiments in my own house, where I was living above Douglas, and he listened to me and said, “Oh! You’re making some good sounds! Come on!” and he started to bring me to Chicago and so that’s where I got a little more bold, because I had to. [laughter]

So I’ve been playing a lot with different ways of singing, bringing different utterances, listening to birds and whales and elephants and cats—they all sing without words—and also human utterances as well. Human languages are musical—some more than others—and thinking about that and incorporating that rhythmically and emotionally into the music and then combining, reinterpreting poetry—some of my own, some other people’s—making things up on the spot.

It’s a combination, a mix of everything, so that every single evening, every single experience is unique. And then every single time we have a show it becomes a community so that the show would be completely different if somebody else was different, either on the stage or off.

JL: How do you choose which poems to read and when to read them during the performance?

MN: Intuition, primarily. Flip through. Feel it. Sometimes I don’t flip through [my book of poems]; I open it up and I’m like, “OK,” that when sometimes I just have a feeling, “I’m going to do this one, it’s going to happen, I just have to wait for the right [moment],” and usually that works. Sometimes, the music changes and the moment passes, and I’m like, “Oh, OK…” But mostly it’s intuition, just feeling it.

JL: You have years of experience; it probably comes to you naturally now.

MN: Some days it feels natural; some days it feels forced. Sometimes you also just have to kick yourself out there, and do something, and then it comes as you take the risk and take the step and take the chance, kind of like life. Sometimes you just want to sit in your warm bed, and it’s cold outside and you don’t want to do anything, but you have to kick yourself out of bed to actually get the rest of your life moving, so that’s the same principle. You just have to take a leap and see what happens.

JL: That’s a good analogy. Who are your favorite poets?

MN: Oh my God! [laughter] I can’t answer that question! It’ll change every single day! Right now my favorite poet is an unknown Anishinaabe poet who I work with who’s in prison right now, and she’s amazing; her name is Carol House.

But I love all kinds of people: some June Jordan, some Ishmael Reed… there are so many people who write who are amazing. My favorite shifts depending on the day and the feeling. Who are your favorite poets?

JL: I have the same answer as you!

JL: Who are your favorite musicians, or musicians who have been the most influential to you?

MN: Oh my goodness! [laughter] I like all kinds of people: Umu Sangare, Nina Simone, Ella Fitzgerald, Rahsaan Roland Kirk, Eric Dolphy, Erykah Badu… it’s all over the place. Again, the list would shift depending on the day. John Coltrane, of course, Jimi Hendrix…

And it’s so critical for us to keep supporting a wide scope of music and a wide scope of art, because otherwise… it doesn’t exactly go away, but you make it harder on the artists if you don’t come and enjoy them. And they push themselves, but it’s really critical to have people who will come and take part, because that’s part of how it takes life, gives life, how it continues. If it doesn’t continue and if there’s nobody around, it’s only navel-gazing. Navel-gazing has its time and its place, but it’s not all the time.

JL: How much do you leave to improv and how much is planned?

Dushun Mosley: The lines are all written, and then, in between those pieces, what will happen is we know what it’s going to go to—the ABA—and the rest of it is improv. So first we lay out what the thoughts are and we take that, and we keep the form, and then we progress.

JL: How challenging is it to improvise with other people like that?

DM: Very challenging. We can’t just play anything we want. You’ve got to play with the rest of the people, which is different than some other kinds of music where you can just get off any time you want, but for us, everybody has to get off together. [laughter] But we try to. And sometimes that doesn’t happen and we all fail… not fail, but we all don’t get off as high. It’s not failure, but we always feel we can do better.

JL: I understand you grew up in Minnesota and Kenneth grew up in Detroit. What brought you two to Chicago?

DM: Kenny [Green] and I went to college together, and Mankwe plays with Douglas, and I play with Douglas too, and that’s how we met in that band, and that’s been ten, fifteen years… it’s been a real long time!

For more information about Intersections and Elastic Arts, visit www.elasticrevolution.com.

Jenny Lam blogs at Artists on the Lam. Her Twitter handle is @TheJennyLam.