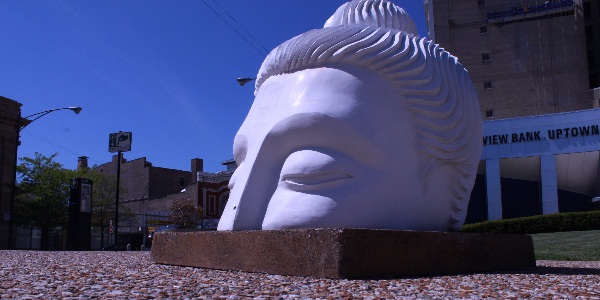 If, while walking around Chicago, you discover what appears to be the bust of a serene Buddha submerged in the ground, don’t be surprised. You’ve just stumbled on Indira Johnson’s Ten Thousand Ripples. Consisting of 100 statues scattered across ten neighborhoods, the project aims to spread a message of peace and fellowship. In the words of the project’s website, “Each community brings its distinctive approach to TTR. However, the common threads include neighborhood based dialogues sessions, artistic programming, the installation of public art and arts infused community development plans.” In 2013, Johnson was the first visual artist to be named Chicagoan of the Year by Chicago magazine, who specifically cited the Ten Thousand Ripples project in their decision to do so. I had a chance to sit down with the artist, and find out more about the future of the project.

INDIRA JOHNSON: First of all, Ten Thousand Ripples is the name of the project and it was—it is, because it’s currently ongoing—a collaboration. The leader organization is Changing Worlds, which is an arts education organization with ten communities in Chicago ranging from the far South Side to Evanston on the far North Side. We spent a year in the engagement. Engaging people from all the ten different communities, introducing this idea of a public art piece that would be in their communities, that they would take ownership of, they would decide where it should go. They made the decisions to what kind of what art projects they wanted to do. After that year of engagement we installed the hundred Buddhas, ten in each community, at the end of one year after they had put together a number of art and engagement peace projects.

KWAME SHORTER: And the first anniversary was this year?

IJ: 2013 was the beginning of the second year. And then we gifted five sculptures to each of the participating communities. We took five back for the exhibition and to put into a new community, so that there are still 50 sculptures out there in the ten communities. And it was challenging for the communities to decide which five were staying which ones were going because neighborhoods became very attached to the sculpture in their neighborhood and didn’t want that one to go.

For example, in Evanston a very generous donor bought an extra sculpture so that there are six sculptures in Evanston, a sixth sculpture that will be traveling with them. It will travel through all of the district’s 25 schools, and different schools will book for a scheduled month by doing a peace project. That’s been traveling with them and they’re actually having a peace event in a couple of days at Kingsley School, which is the host school.

KS: So there’s obviously a lot of moving parts to this whole thing. The communities you’re working with are coming up with their own reasons for having these installations.

It ended up that we had very little graffiti because of that, and when it did occur the communities were immediately cleaning it up because they were so upset that someone had dared to do that. So they really felt like their sculptures belonged to them.

KS: Can you tell me about the neighborhoods that had the most participation?

IJ: Well, we started off by forming an advisory committee with leaders from the communities, people from the major museums and from educational institutions. Loyola was one of them, DePaul was one of them. We had someone from the Art Institute and someone from the MCA, and we also had someone from each of these communities as part of that advisory council. They sort of helped shape the project. But like I said we went with umbrella organizations from each community which would then work with a number of other organizations. They had to host the meetings because no one’s going to come if I show up there and say, “I’d like to have a meeting. Would you come?” They would host the meeting and I would present to them so they had the opportunity to ask me questions. Sometimes that would be pushed back, and the question becomes how do we work through that. So that conversation was very important to the project because the idea is peace and how do we talk about our differences. We don’t all agree about everything.

An installation in Evanston residing in the center of Grey Park, 2014. Photo credit: Brett Johnson.

KS: There must have been some opposition. There aren’t not that many Buddhists in the city of Chicago.

IJ: Yeah, and I tried to make it clear that this was not a Buddhist project. I’m not Buddhist, and to me, this image is a symbol of peace. From my previous, private art exhibitions at the cultural center in Highland Park, I saw the response from people to this image. Even though my primary symbols are the hand and the foot, I didn’t think I’d get the same sort of response if I had a hand as a symbol of peace. People came up to me and said, “You know a dove is a symbol of peace,” but that just didn’t resonate with me the same way. So finding one of these emerging Buddhas in the middle of an abandoned lot makes someone stop and think, “Why is this beautiful piece sitting there?” Sometimes it’s surrounded by garbage.

The artist beside another of her works, 2014. Photo credit: Brett Johnson.

How does it change space? Who owns it? The public space is owned by the public, but that’s such a wide group of people. Who is the public? Is it the person who walks by, the person who lives there? All of that negation had to take place. Some of them had to be installed in a shopping center, so there you have a variety of public coming to see it. The shop owner wanted it there, but then you have people going back and forth and what is their response?

We tried to capture some of the response from people who were just passing by–the chance encounter as well as the deliberate encounter. Each community did a number of art related peace projects.

KS: You said something about seeing one of the moving Buddha heads at a school and you were working with an art teacher, Jacqueline Salinas?

Kwame Shorter is a journalist and webby-type person who focuses in writing for web content, public/media relations, business and technical facilitation. He is an avid writer, communicator and web designer/developer. He has worked with a number of publications in the Chicago-area and has contributed to The A.V Club, Huffington Post, Gozamos and Knuckle Rumbler. Kwame hopes one day to combine his skills as a content specialist and a WordPress enthusiast to work consulting businesses on content strategy and user experience.