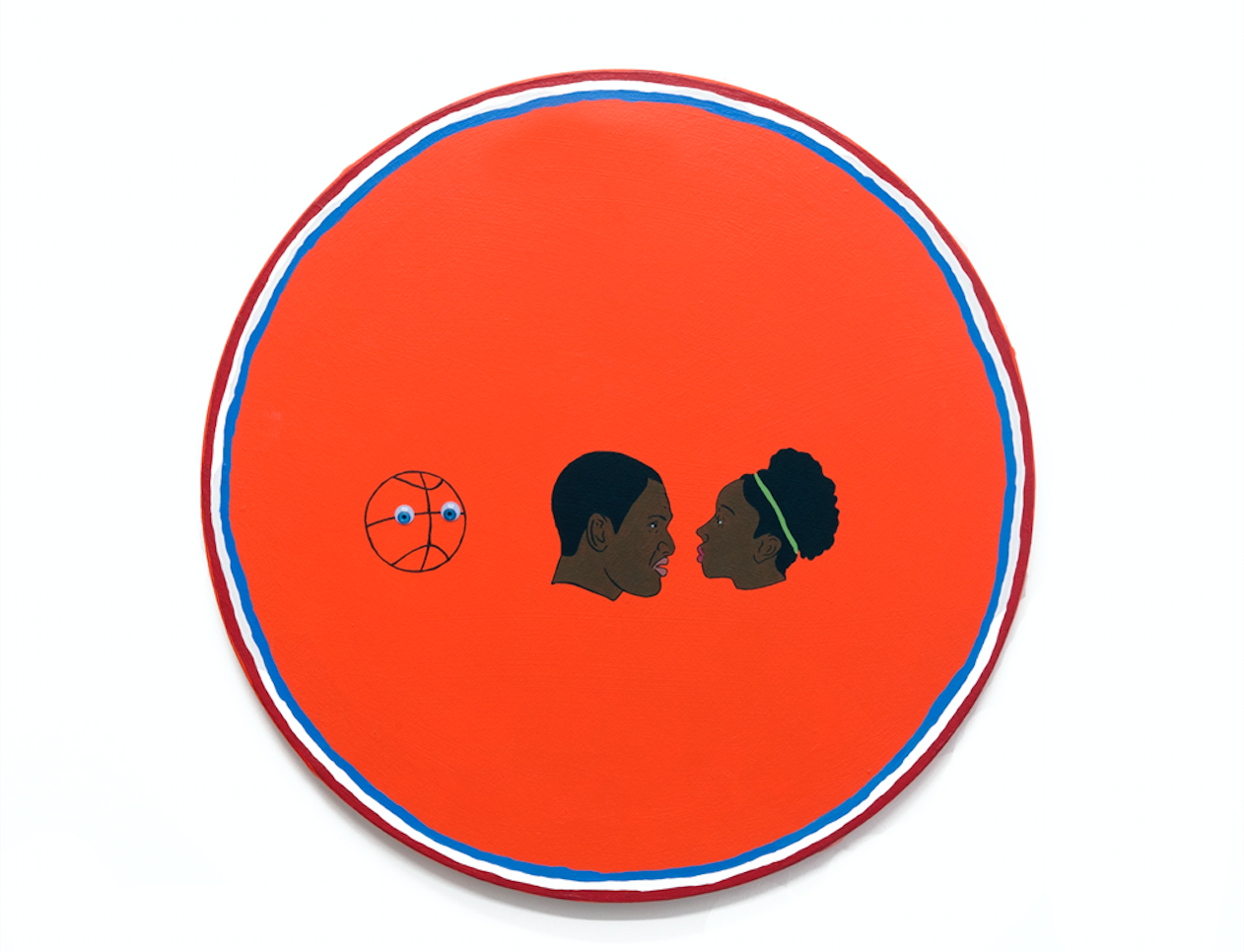 David hesitated a second when I asked him “what type of artist are you?” It’s almost as if he didn’t really understand the question. The question, “How do you describe yourself?” must have resonated since his immediate response was, “Oh, I do folk art with a gangsta lean.” This prompted me to immediately break out in song– ”sunroof top, diggin’ in the scene, with a gangsta’ lean, whooo hooo…” Someone gave him this moniker and it stuck, but he doesn’t remember who. So, if you’re out there, let him know who to give the credit!

David’s work is all about the currency of challenges: dissecting issues around race, sex, power, popular culture, politics, music and more. But his work is often impacted by influences from long ago. In this installation, we talk about his musical influences, how he witnessed the impact on black culture and the harsh realities of race.

Sheila Lewis: Black Drawls. How did you come up with that title?

David Leggett: R. Kelly had a album called Black Panties, and I thought Black Drawls was a funny counterpoint. It’s like a double pun. Is it Drawers? Drawls? Is it drawing? Black people drawing? [lots of laughter] It’s a good pun, as well. I moved to Chicago to meet the Hairy Who group. A lot of their titles have heavy pun and very corny puns that I love.

SL: Tell me about the music that influences you.

DL: The good thing about where I grew up, I used to live next door to a radio DJ named Mingo, who had a show called Mingo Madness. He used to give us singles and CDs. It’s interesting, I’m 36 but I feel like there’s a lot of people my age who don’t know about basic hip-hop. How do you not know Big Daddy Kane? Or, how do you not know LL Cool J from back in the day? I know people know him now for the television show CSI, but LL Cool J could end people’s career, like Whodini. He destroyed so many people because he was such a vicious rapper. I guess I’m more of an old school hip-hop person.

I remember getting into an argument with people about Jay-Z’s 99 Problems. How do you not know that is Ice-T’s song, that he sang with 2 Live Crew? I also think hip-hop has switched since then. I remember most rappers didn’t curse and there were a lot of positive messages whether they were doing it or not (put the guns down, practice safe sex). Then when Ice-T and NWA came out I felt the neighborhood where I lived, you could feel the change. You already saw drug dealing and stuff like that all the time, but now there’s a soundtrack to it. People changed their clothes to emulate this. I feel like there was this ‘extra’ type of thing.

I guess having that type of closeness to hip-hop, it was just so much a part of my growing up and seeing people move from having a good time to people not having a good time. A combination of people doing drugs to people I knew who got strung out. I feel we were having a good time partying. But we were not feeling the drugs. Drugs fell into hip-hop in the late 80’s and in the early 90’s. But Hip-hop still interests me.

SL: Where are you from?

DL: I was born and raised in Springfield, Massachusetts. My mom is from North Carolina and my Dad is from Mississippi. Both parents migrated from the South to the Northeast and both of my sisters still live in Springfield. Chicago Imagists is the reason why I moved to Chicago.

SL: Is there an east coast vs. midwest influence on your work?

DL: I’m not sure how midwest I am. In the midwest everyone is pretty laid back and nice. It’s not that the east coast is mean, they just don’t have time for chatty talk. They aren’t rude, they are just being, east coast. Maybe my work has more of an east coast, not caring as much vibe. SL: How did you learn about old school hip-hop?

DL: Well, I was so very aware at 5. [lots of laughter from us both]. My sisters are 6 and 8 years older than me, so I heard the music a lot. I have one of those weird memories where things stayed with me. The music really stayed with me. For me, hip-hop kinda stopped with the Wu-Tang Clan. Ghostface Killah has a new album out? That’s all I can do there. This new stuff, I get it, I guess. It must be popular if I know the rapper. But I’m probably not going to buy the album.

SL: What albums do you own?

DL: I don’t buy anything currently.

SL: What, an artist that doesn’t support the art?

DL: I have Sirius XM and I just listen to Backspin which is all music that cuts off around the year 2000 and goes back to the beginning of hip-hop. But I want to say I enjoy all music, not just hip-hop, but it’s kinda all I’ve been listening too lately. DL: Definitely KRS-One (they were still Boogie Down Productions back then). The whole entire MC-Shan vs. KRS-One. Such intense battle songs during the time of The Bridge. There’s something about that. I was like damn! That’s pretty hard. I think I was a little kid, I was like 9 when that came out but still to this day, I hear that beat and I say wow. Attacking Roxanne as well. You didn’t need to do that, she was like 15 at the time and I was like, what?

SL: What are some harsh subjects you contextualize in your work?

I’m making fun of the absurdity of the entire bathroom thing, but also people finding an argument when there’s not really one.

SL: Is there anything you want to say about the realities of race and class that hasn’t been said?

DL: Is there something new to say? There’s definitely people harping on race and class. It’s definitely interesting. Even if you are a successful Black person, there are still gatekeepers for whatever you consider to be the Zenith. I hate to use Kanye West as an example. Even though he has many issues, there’s definitely things he says about people stopping him from doing whatever it is because it’s not considered what a black male without a college degree thing he should do. And these are all people who consider themselves to be very liberal.

For me the first time, with the George Zimmerman thing, I thought for sure people will know this guy is a fucking nut job. After the case this guy has proceeded to do everything in his power to let people know that he should have gone to jail. From domestic violence with several different women to inkjet prints that he paints over–one was of Trayvon Martin–and he gets tens of thousands of dollars for these things. He’s at gun shows signing pictures. There’s just so many things and you still have people saying, well, maybe there’s some depression or whatever.

What’s the ethics for him to keep pretending he doesn’t have money? He’s still being funded by some extremely right wing people. He doesn’t have a job. But he’s doing just fine. He’s going to be alright.

I also think people get so wrapped up in “call out” culture. If a few thousand people say things, why do we constantly tip-toe around this? The whole thing about Ghostbusters, it was terrible what people were saying but if you fan this flame this is certainly going to be what they’re going to do. You responding to their trolling Internet troll chatter doesn’t get to me. Call it whatever. I don’t get upset about it. So what. So what someone said that. I think maybe I see it differently. I get annoyed when CNN or Fox News covers something so trivial because it’s not a big deal. Don’t give them the satisfaction. The country music awards? They made money, so we are good … keep it moving. We have to keep it moving.