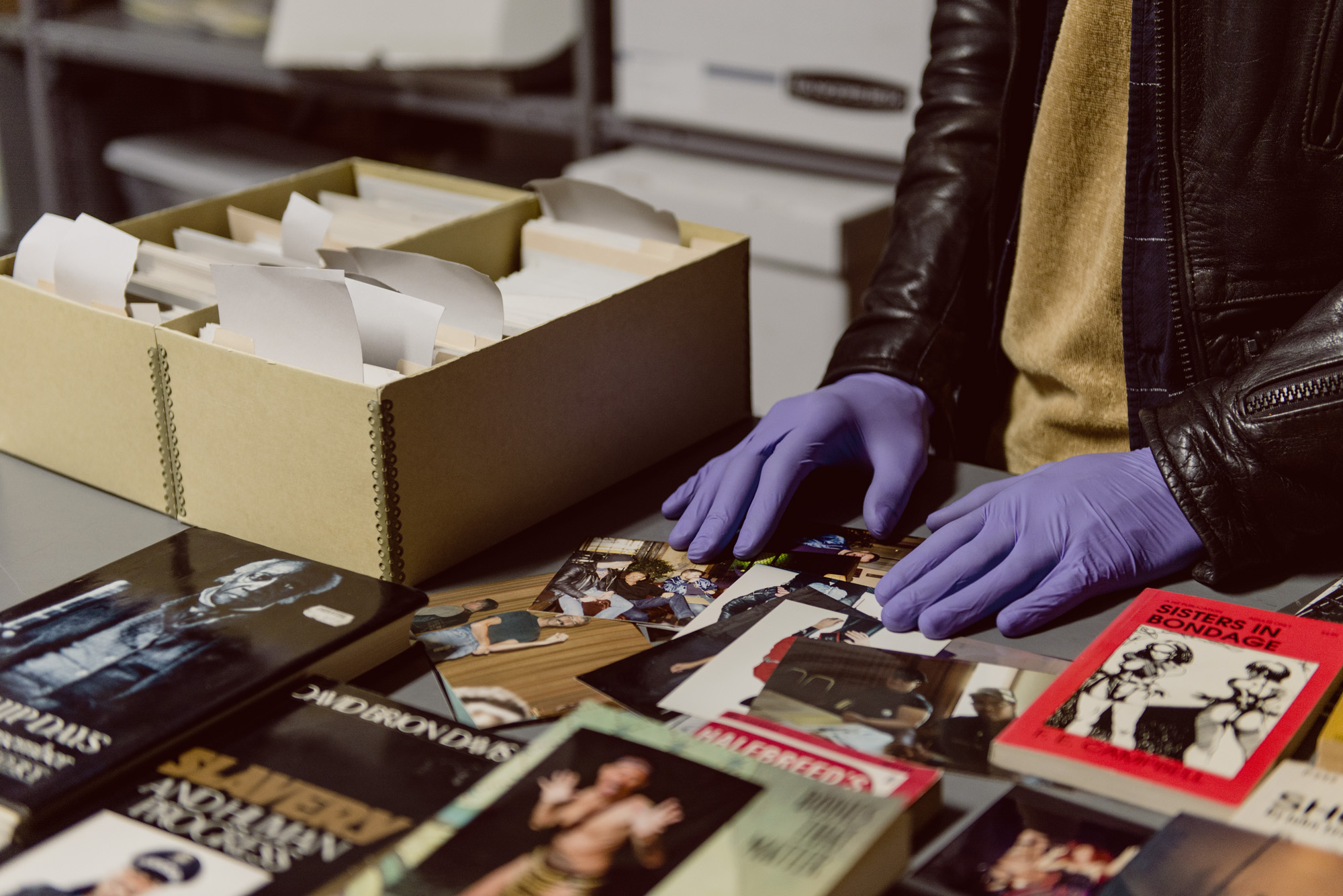 The Chicago Archives + Artists Project (CA+AP) is an initiative that highlights Chicago archives and special collections that give space to voices on the margins of history. Led by Chicago-based writers and artists, the project explores archives across the city via online features, a series of public programs and new commissioned artwork by Chicago artists. For 2018, the Gaylord and Dorothy Donnelley Foundation has funded a series of pilot projects pairing three artists with three archives around the city: Media Burn + Ivan LOZANO, the Leather Archives & Museum + Aay Preston-Myint, and the Newberry Library’s Chicago Protest Collection + H. Melt. This series of articles profiles these featured archives and artists over the course of their collaboration, exploring the vital role of the archive in preserving and interpreting the stories of our city as well as the ways in which they can be a resource for creatives in the community.

In the Leather Archives exhibition, Aay Preston-Myint exhibited their work Dirt/Work, which illustrates the archival process of leather culture. The artist writes, “Archives are one of many ways in which we focus our gaze and ascribe taste and class to material culture. Our community is simultaneously removed from and a product of retrograde and orthodox notions of what it means to be fit, to belong, to be beautiful, to be part of history. Dirt/Work is an attempt to start working through this frustrating paradox.”

What follows is an interview conducted via email between the artist and S. Nicole Lane. S. Nicole Lane: Your interdisciplinary work looks at queerness, memory and the future. Can you discuss how these topics weave into and influence your visual work?

Aay Presont-Myint: I think I used to use my work to equate futurity, or the unknown, with queerness….but I suppose what I’ve become more interested in is being queer in the now; in these temporary utopian moments that are unsustainable given our current political conditions, but provide a template or a model, a space in which to consider belonging and kinship among queer people. Perhaps more accurately I’m interested in moments out of time, whether they are memories of the past or desires for the future—flash points of recognition, questioning, community and clarity that are here for a moment and then gone again. I’m interested in seizing those moments and making them still, or expanding them and picking them apart. Formally speaking, I’ve gravitated more towards symbolism and abstraction as a place to explore and contemplate queer identity, and often use the architecture and infrastructure of nightlife as visual inspiration: shadowy spaces, flashing lights, mirrored walls, smoky air, drapes, platforms, etc. When initially approaching the Leather Archives, I was interested in the symbols, visual codes and material interpretation of queerness and sexuality expressed in the banners and club colors of different leather and fetish groups. I also love a good visual joke and, of course, art and design coming from a community dealing in “taboo” activities is full of them.

SNL: How is archiving essential to your practice?

APM: Working at the Leather Archives has been a healthy reminder of how material culture, vernacular design and DIY publishing are essential parts of any movement or subculture. As someone who works in print and publishing starting out in a scrappy basement print shop (I still work in these sometimes) and becoming an artist who designs and prints “museum quality” work (these scary quotes are very large), this project in a way was a full-circle reminder of how and why I was initially attracted to these means of production.

Through my own career as an arts organizer, a queer community organizer, and through my work at the Leather Archives & Museum, I’ve realized both the difficulty and necessity of archiving for artist communities and marginal communities. We need these repositories of images, materials and history for our inspiration, to find role models, to not make the same mistakes, to not think you’re alone, and even more importantly, to not think you’re original – you’re a part of a thread, a lineage. Image: Aay Preston-Myint is standing behind the archival table looking down at various materials from the archive, including books and photos. Boxes of archival materials sit on shelves behind the artist. They are wearing a leather jacket and purple gloves. One hand rests on their glasses. Photo by Ryan Edmund Thiel.

SNL: What have been the challenges, constraints and/or benefits and surprises of working with archives in the Leather Archives Museum?

APM: Some of the fundamental challenges facing the Leather Archives are that they’re underfunded and understaffed, just like most other cultural organizations. They’re working on this steadily, and I was never lost or without help (the knowledge and generosity of their archivist Mel Leverich was indispensable)—but I want them to have all the money and, like, ten more people on staff so that everything can get preserved and catalogued. However, unlike a lot of other collections where the preservation and bureaucracy are so complex that no one can access or learn from them, I had a lot of trust and freedom to roam. Couple that with my short attention span, and I would get distracted and fall down rabbit holes. That’s how I arrived at the material I used for this project; I just got distracted by a box labeled “towels” (thinking, why are towels collected?), saw some IML stuff in there, then got lost in all of these photographs from IML that were just sitting on a shelf. Then, I started looking at all these old zine layouts filed next to the photographs. It has forced me to perform a lot of close reading, to think about conceptual links and gaps and question certain hierarchies of objects and materials.

As I continued to explore the Leather Archives, this idea of identity and abstraction that I mentioned earlier shifted shape. I began to think about how the archive is not just a curious collection of stuff that happens to have a fetish theme, but is also an expression or articulation of concepts like the gaze, value, labor and community. It is who is seen, or what is seen; how certain performances of gender are valued, how labor is gendered. Who feels included or represented by the concept of “community.” Both the owners of the objects and the culture at large leave their imprint on the objects, imbue them with meaning and soul. These objects survive to embody or speak to these “moments out of time.” However, as someone who has an investment in the leather and fetish communities but also stands at an intersection of various other identities that aren’t always included or represented in those scenes, I started to think about what was missing or unspoken, not just what was presented at face value. What does “leather” look like outside of the template of white, male, conventionally attractive, muscular, and dressed in costly gear? I started scanning the archive looking for hints of difference or divisions in perspective, gaps in narrative, missing information, double meanings. It’s actually been a secret desire of mine to be a curator or exhibition director at a place like the Leather Archives & Museum, so in a lot of ways my project is an enactment of that. Image: A hand towel lies on a grey table with photographs scattered around it. The hand towel is off-white and has a drawing of a figure being fisted by an arm coming from the right side. Photo by Ryan Edmund Thiel.

SNL: You collaborate often and work with organizations on various projects like Chances Dances. Can you talk about how collaboration is important to your practice and how it differs from your individual practice?

APM: While the output of my collaborations and my solo work are visibly different, the content of my studio practice is derived from the political and social concerns of my communities (whether that is queer nightlife, independent publishing, artist-run spaces or places where these things overlap). I decided not to think about them as separate practices, but rather different strategies toward a common set of goals. A lot of the questions I try to ask as an artist moving through the world (not to mention as a professor and an arts administrator) are the same questions that are put forward in queer communities and artist-run spaces. Negotiating a place for your identity, redefining your value in a system that doesn’t value you, reinscribing the context in which (art) history wants to keep you out of convenience, hostility or fear. Whatever form the action, product or work takes, whatever the specific narrative of the piece is, when you zoom out, that’s what I’m about. Working collaboratively on so many things has helped me rethink how ownership, process, and product are valued and deployed in the art world. Image: The viewer is from a lower angle looking up at the artist who is standing outside of the LA&M. Their gaze is looking off into the distance and they are leaning against a railing. Photo by Ryan Edmund Thiel.

SNL: What are you working on right now? Anything you would like to share (upcoming shows, events, projects)?

APM: I’m just trying to figure it out. Though I still have work and collaborations that keep me tied to Chicago (such as the Chicago Art Book Fair), I moved to San Francisco in the middle of this project (another important location for leather/fetish history, but that’s a whole other story). It’s been a challenge—this is a pretty hostile place for artists, especially artists of color—but it’s definitely helped me remember what it’s like to work without a studio, or without much control over your means of production. Flashback to my art school days when the library or the print studio closed, that was it for the day. And then having to figure out how to scale a larger project down to portable pieces. It’s different for sure, but I’ve always been good at fitting my practice into the container I’m given. I’ve been trying to get a foothold in different communities here, like among arts organizers, in nightlife, in independent publishing. Despite the doomsday urgency of living in a place like the Bay Area, people have been enthusiastic and generous with what little they have, though sometimes the elusively chill stereotype does prevail. I do have a solo show lined up in Oakland in September, as well as a lead on one in Chicago in between now and then, so if nothing else I have deadlines. Outside of the archive project, my current work has mostly taken the form of large-scale wall drawings made on-site. I’d like to continue that work, but I am thinking about how to translate that into more portable formats that I’m versed in, like printed fabric, works on paper, or maybe even ceramics so that I’m not reliant on a large studio space— and can maybe, ya’know, actually sell and make money off of them for a change.

Featured Image: The artist is wearing purple gloves and is touching various photographs on a table. We do not see the artist’s face, but we see books, boxes, and images from the archives.