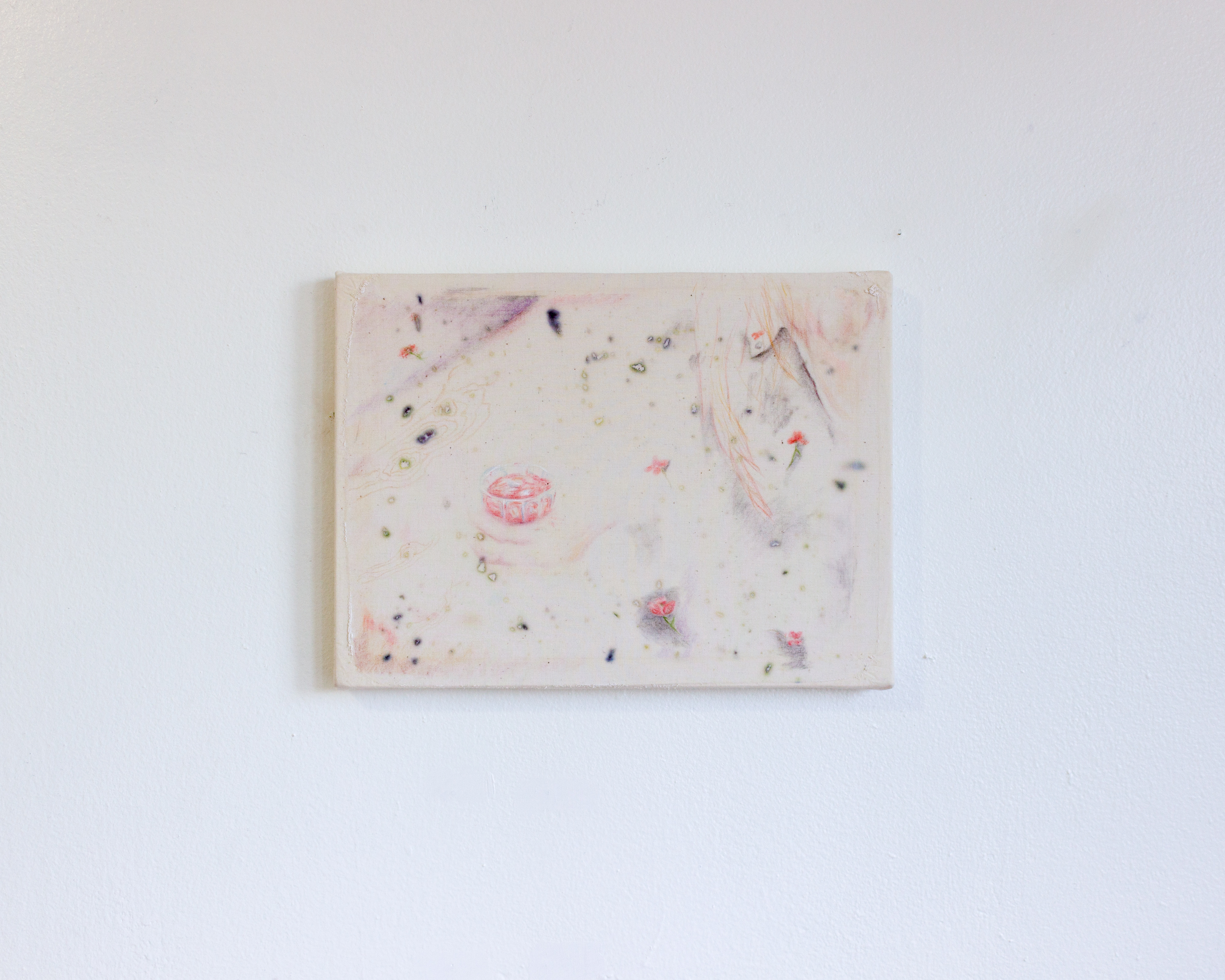 Earlier this year, the two-person show Always Touches on a Flower at Apparatus Projects (February 17 – March 24, 2019) featured the work of Alejandro Jimenez-Flores and Cathy Hsiao. Enveloped in the themes of flowers and language, Jimenez-Flores’s work created an intimate and beautiful space at Apparatus Projects. Their work of soft floral transfers and paintings deal with themes of memory and plays with the language of flowers, both in Spanish and English. Pulling from personal memories, poetry, time traveling, and everyday experiences, Jimenez-Flores’s work is not to be missed.

Cecilia Kearney: Let’s start with some background, tell me a little bit about yourself.

Alejandro Jiménez-Flores: I’ve been an artist since high school. I mean, I always doodled and sketched growing up, but when I went to high school I took photography classes after school. And then I was an arts major. For undergrad, I went to UIC. I majored in Studio Arts (drawing and painting), but I was kind of all over the place–I was doing painting, video, and sculpture. I don’t necessary make traditional paintings and sometimes [I don’t] even engage with the kind of language that painting is engaged with. I use that field to start other conversations. I did some curating after undergrad at ADDS DONNA and DOS PERROS PROJECTS. About four years ago, I finally got a studio and that’s when I started producing more work. That’s the brief history of my art practice.

CK: So, tell me a little bit about the show you were in at Apparatus Projects.

AJF: I feel like, given the first time I met with Gareth Kaye [Apparatus Projects director] and Cathy Hsiao, it seemed like we all kind of had a vision for the show. I was thinking  about materiality, and the approach to material and process, and I feel like then the show started happening from there.

CK: Did you make work after you met with Garreth, then? Or did you have the work already done before?

AJF: I kind of had an idea. I knew about the show for several months and I had just been wrapping up another show. So yes, I made most of the work specifically for this show. Some of them are works from last summer. I was making some material moves, like working with plaster and flowers, which I started doing in the fall at the show at Heaven Gallery. I showed a piece with plaster in another show at BAR4000—soft pastels on plaster. And in some ways, for the Apparatus show, I combined those two [materials]. That became a new move. And just having to show works with Cathy made the move even more assertive–playing with both of these materials.

CK: In what ways do you think the culture you grew up with influences your work?

AJF: For me– I wouldn’t say, necessarily, direct culture, but I recently started drawing things from memory, of my relationship to certain experiences of living in Mexico, and also here– how through those memories, and also through the materials, my works have been kind of mediating this identity and play with language. I feel like I’ve been using flowers for about…four years now? And in some ways it’s a way for me to mediate my own identity formations through flowers. So my approach is to […] let my process-based practice kind of create this space for new language to form, which is a language I feel there is a lack of, or it feels like I need to make that kind of language.

AJF: When I’m making most of my pieces I’m not thinking necessarily about Spanish or English. Most of my vocabulary about art and talking about art is in English. Recently, I had a show in the fall at Sector 2337 in correlation to the Lit y Luz Festival. That exhibition was all about text and language and it [included] artists from Chicago and Mexico. There was a text written for the exhibition and also a bio and short description, and it was translated to Spanish. That was actually the first time I read something about my practice in Spanish, and that was just kind of mind-blowing. It’s something that, in some ways, I’m experimenting with a little bit more. Sometimes it shows through the titles. Actually, in the titles for [the show at Apparatus], there is one piece that just had the title in Spanish that I intentionally did not translate. Then, there are two pieces that had the same title in Spanish, but there’s a hyphen and it has the translation–and the translation varies. I guess I have always played with language and with materiality – like using the language of flowers and kind of trying to discover or let it happen, as opposed to imposing a language onto flowers, or a still life or a landscape. That’s how I think about language when I’m making work. Sometimes I find myself in between the lines.

AJF: I’ve always been interested, actually, in translation and I guess that’s probably why I just went to painting. In high school, I used to read poetry and that was how I was learning English. I had this book of Pablo Neruda (Residence on Earth), and it had the poem in Spanish on the left and the translation on the right. In one of my favorite poems, there is this a line: “ir por las calles con un cuchillo verde,” and in the translation, it [says], “to go through the streets with a sexy knife.” And I was like, “How do they come up with ‘sexy’ instead of green?” So it changes the whole thing. Sometimes I feel that translating something– or the choice of not translating something and letting it exist in one language–is a move that I’m starting to do more. I just go back to abstraction and find some safe space there. When referencing this subject and materiality, I feel like I’m always cautious of the language I might impose onto the materials or the subjects within my work, because any kind of form of language structure might be a trap or slippery zone.

CK: What mediums do you use, and what got you interested in them?

AJF: For me, it’s been a weird loop. It’s more about my process that I started doing four years ago. I started transferring, which is more like mono-printing. I use soft pastels to draw an image and then I transfer that to the actual surface that is later exhibited. The first time I did this was with paper on paper. I would draw with soft pastels on paper and then transfer it–a kind of monoprinting. Then, from there, I started doing fabric on plaster. I would draw on the fabric and then pour plaster, and then the plaster would just suck all the soft pastel dust and texture [out] of the fabric.

AJF: When I do the transfers with plaster, it’s usually just one transfer. But when I do the fabric on fabric, it becomes like a mirror image. As I draw, I keep transferring, so the drawing exists in this expanded time and space across multiple surfaces. And I can typically keep working on that and keep transferring. I use very little paint, if I use paint. I also do performance, writing, and collaborations.

CK: What messages are you hoping to convey through your work? What do you hope people will get out of this? Or is that even the purpose of it?

AJF: For me, it goes back to this kind of longing for language. For a solo show I had two years ago, my niece, who was four or five years at the time, just walked into the show and saw all the paintings and was really, really moved by the show. But she doesn’t have a language to talk about painting or anything, besides being like, “Oh, these are nice” or, “I like them.” But she didn’t say anything at all, and then she just sat in the middle of the gallery and pulled out a notebook and started drawing flowers. I hope that’s what gets conveyed in the work, this kind of encountering of the work and making of language, and then for that to get practiced in its own way and ability.

CK: Who are some of your biggest inspirations as an artist?

CK: What projects are you working on now?

AJF: I’ve done a lot of paintings and I think, even with this show, too—the works at Apparatus—they’re starting to hint towards less painting and more sculpture that deals with the body or its absence. I think that might be a direction that my work takes. And usually when I have a gap of nothing coming up, I go back to writing. So [I’ll be] writing poetry, and then that leads to performance.

CK: Since not everyone gets this much background, is there anything that you wish people knew about you when they’re looking at your work?

AJF: I’m a time traveler. It’s like going back to memory, then taking that and trying to make a language that I wish exists and projecting it into the near-horizon or the future, and making it present. Sometimes time in the paintings and transfers has temporalities all over. My brain gets a bit loopy. I guess, for me, the other thing that some people get confused is this other, florencio. So florencio is a conceptual personae; it’s not an alter ego. Florencio and I don’t like that term. I channel florencio, and I make paintings that way and also approach other people to do collaborations for florencio–I’m just kind of this mediator. So, in some ways, I’ve been having two different practices, but really in the background it’s all florencio–this battle with language weaving through these language systems, and trying to loosen the nuts that make it work.

CK: What is your dream project if you had unlimited resources?

AJF: Last fall, I visited the Toledo Art Museum. They have a really good collection. They have these antique pianos in the middle of a room full of baroque paintings, and I’m writing a proposal to see if I can do another iteration of a performance I did at Heaven Gallery–florencio’s first hand at playing music–and have other works in an adjacent room. They love glass in Toledo and I would propose to do a residency at Toledo Museum of Art Glass Pavilion to create some works for that exhibition. Florencio wants to recreate from memory the glass marbles I used to play with when I was a kid. I would also do other interventions with their collection and spaces.

Cecilia Kearney is a freelance writer and photographer, focusing on up and coming artists in Chicago. She is an English major at DePaul University. She is minoring in photography and her photography projects focus on people and their relationships to the world around them, as well as themes of femininity and the human body.

Cecilia has worked at nonprofits around Chicago and is involved with social justice-based groups at DePaul University.