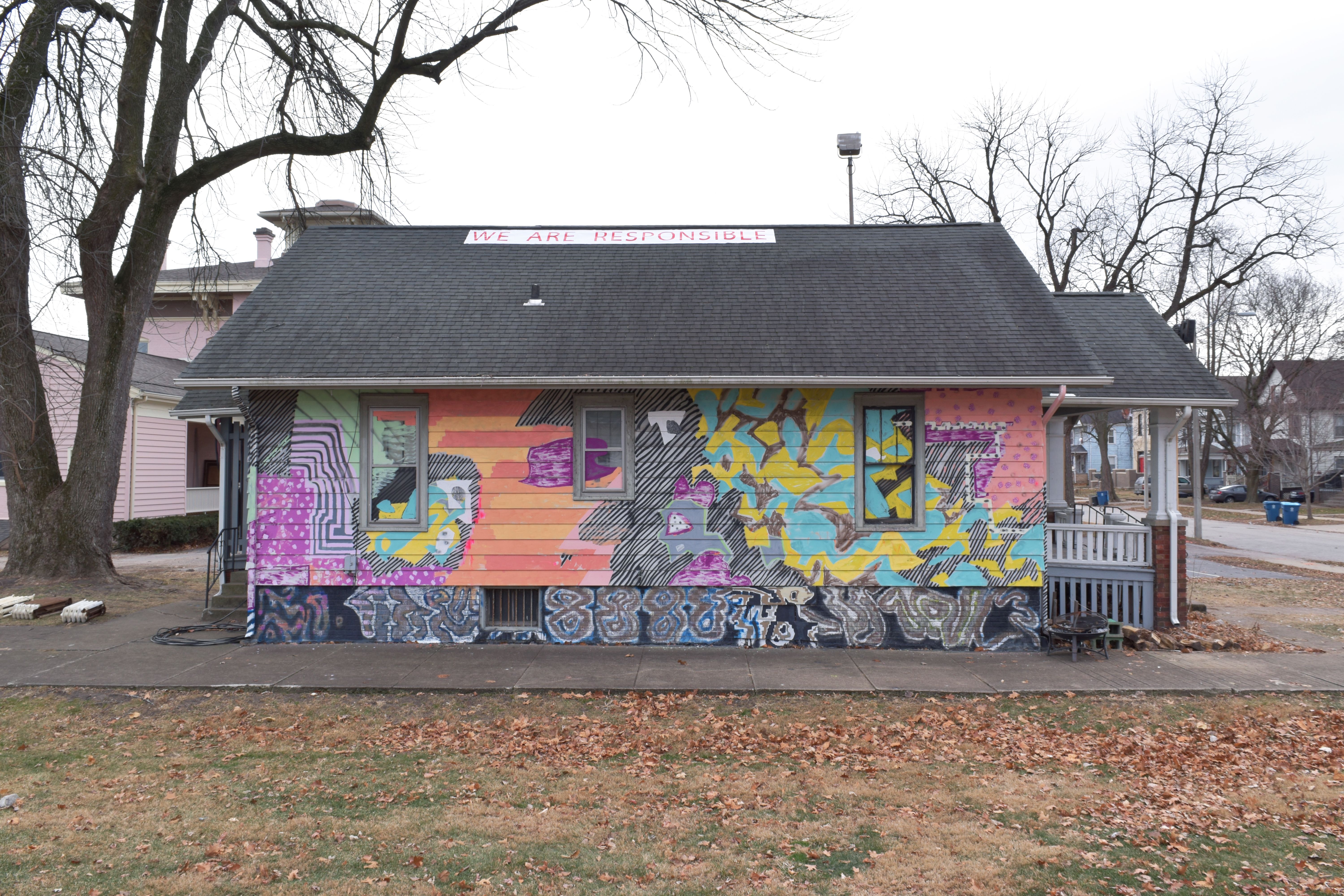 I usually live on the East Coast but something keeps pulling me back to Illinois. Between 2013 and 2018 I returned four times–for a residency, a job interview, and twice to make site-specific paintings with Will Hutnick. I can only hope the future provides more reasons to return.

For three weeks I lived in a small apartment at the top of a tall dorm. I had a kitchen but can’t remember if I cooked anything. Probably just scrambled eggs with onions. I do remember longish elevator rides with undergraduates–listening and trying not to listen to their conversations. One morning there was a fire alarm and the entire dorm rushed down the stairs laughing. It was 7am and I was not laughing. When we got all the way downstairs and out to the street I remember walking an extra block as to not be surrounded by students in their underwear.

My first day of teaching I immediately dropped a container of silver thumbtacks on the floor. We talked about mapping and abstraction, pathways to mark-making, what a visual grammar might be and could be. There were piles of vellum and ebony pencils, and lots of cutting and recutting. We built weirdo tools out of dowels and attached them to our heads, making drawings by moving ourselves around. Students were quiet, and then less quiet, and then very loud and very much up for anything. We made drawings on big paper on the floor and on the walls. Students traded their DIY drawing tools. It was mayhem but generative.

I remember long, generous dinners at Harry and Erin’s apartment and meeting Barry for the first time. A late evening trip to Menards with Mike to pick up colored tape. Getting to see Melissa again after many years, and meeting Andreas. Negotiations with Dave, who helped me use the theater department’s CNC router. Runs to Garlic Press to get sandwiches and sodas for the students who devoted endless hours to helping me cover Gallery 2.5 with 4,000 small printed sheets of paper for my show. And the copy place people looking at me like I was the kind of crazy they wanted to know more about.

Will and I flew into Chicago–I don’t totally remember why, except for I think neither of us realized where Springfield actually was. We rented a car and drove to Allison’s house, though we had never met her. We spent a week with the keys to the kingdom that was DEMO, painting every day from morning until night–pausing only to get hummus and carrots and talk about our upcoming weddings, which were scheduled only weeks apart. I remember the coffee bar in the grocery store near the gallery didn’t have any almond milk–I bought a container and they kept it in their fridge so I could have it in my drinks. Allison and Jeff and Brytton kept thanking us for coming and we kept thanking them for giving over their space for our experiment. To see our idea come into being all around us was scary and thrilling.

On Thursday Will tricked me into staying up all night. He was like a painting rabbit and I was like a slower painting rabbit. We painted the walls, the radiator, rocks sitting outside. Mike came by with his family to see what we were up to. Allison’s place turned out to be a palace and she and Nathan and Bonnie took very good care of us. I remember drinking bourbon and watching Columbo. My room there had a wall with vertical stripes. I think there was Thai food in a restaurant with amazing decor. When we left we sent a giant cookie.

Back at Illinois State University for a different kind of trip, an on-campus job interview for a professorship in painting. In one sense it was a strange way to return, but actually, it was fine. Nice to see professors who had become friends and to connect with students. I remember numerous meetings with Mike, meals with him and Melissa, always being walked from place to place by one faculty member or another. I spent time thinking about living there, having those buildings be my buildings. I was only back for a few days but it was my first campus interview and it was like a 72-hour durational performance piece in which I wore very nice, dark blue, leather shoes.

We went back to DEMO briefly to paint an exterior wall before the building got knocked down. This time Will got there a day before me even though we were both flying there from New York. I think my flight had been canceled. It was freezing in Springfield and I ruined my winter coat working fast. Paint would start to tighten up on the brush and it became a feat just to get it onto the wall. We took breaks inside the Springfield Art Association because the inside of DEMO was already locked up. We had spray paint bottles but they would only work for a few seconds at a time. It was bittersweet to be there–I was happy to revisit but sad about the ending of this amazing space, brought into being by an equally amazing crew of people. Maybe it was good that the weather was so unforgiving–it didn’t give me any time to think, I just worked. There were passages with different shades of peach right next to one another, and a passage that Will did in the middle that looked like graffiti.

Featured Image: Mark Joshua Epstein and Will Hutnick, Star Ax Cove, collaborative piece on the exterior of DEMO Project for the space’s final exhibition demo DEMO,  January 2018. Their installation is latex oil-based wall paint and spray paint. They have covered one entire side of the building’s exterior with various lines, shapes, colors, and abstract forms. Photo courtesy of DEMO Project.