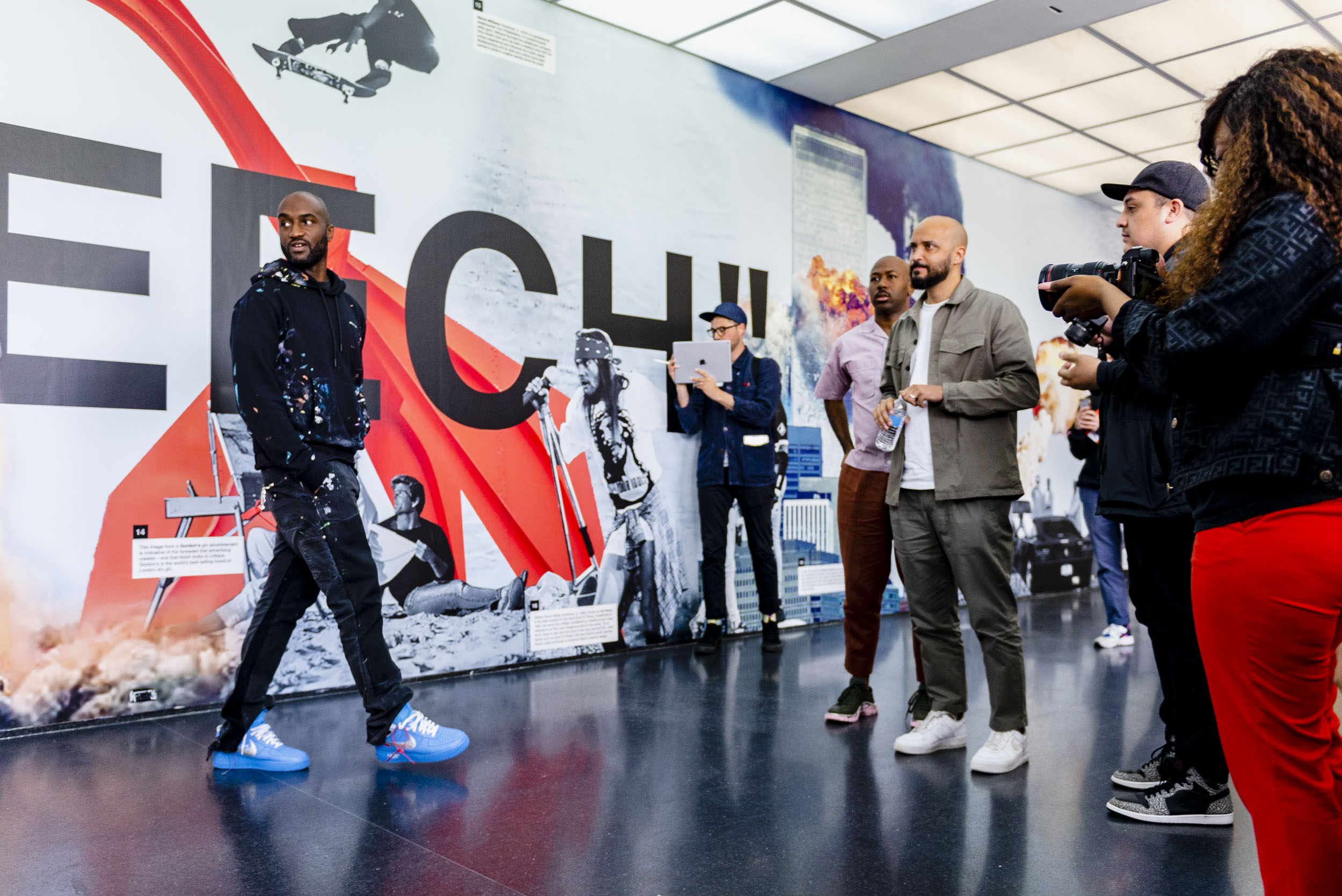 Virgil Abloh, street-forward renegade of high fashion and luxury art, speaks the trickster tongue of logos. Logos are his language, the figures of speech invoked in the title of his survey at the Museum of Contemporary Art Chicago. If we are to understand logos as figures of speech, then we must trace their messaging on our bodies. We are subjected to logos more or less 24/7, but are we the subject of logos? Do logos express our subjectivity? Is there space for authenticity within logo culture? Abloh remixes and samples revered logos from Nike Air to Vuitton, unmaking in order to expose their conceptual significations and limitations, especially in relation to race.

“I want to read an existential essay on logo and art,” Abloh declared at the press preview Q & A.

Logos ( λόγος) has a long history in philosophy and theory of rhetoric. In a discussion of speech versus writing, Plato contrasted logos, or what is said, with lexis (λέξις), or how it is being said, creating a binary of content and style. Speech represented the essential form of knowledge, while he argued writing paled in comparison, as it could only gesture imitatively towards logos.

Why favor logos over lexis? In Plato’s Pharmacy, Jacques Derrida famously rejected Plato’s logocentrism. Derrida deconstructed Plato’s binary, digging into the inherent tension between Plato’s logos (claiming that writing is bad) and lexis (writing literary dialogues). But he didn’t invert this hierarchy so much as subvert its binary entirely, by arguing instead that all speech and writing is a form of mimesis. According to Derrida, neither speech nor writing can articulate the idea/thought itself, but can only gesture towards it (one cannot speak art, one can only speak of “art.”)

So instead of chasing an essential, irreducible Form (Plato’s pipe dream), Derrida pursues chains of signifiers—a horizon of referentiality without origin. Consider the chains of signifiers implicated in Abloh’s literally chaining a Vuitton Keepall bag to the floor, the cunning dialectic of luxury and oppression invoked. Is not Abloh a prankster-philosopher?

I read Abloh’s fashion work in the footsteps of Derrida, giving figure to problems of rhetoric. Take one of Abloh’s signature sneakers. In a send-up to René Magritte’s conceptual Surrealist masterpiece Treachery of Images (you know the one), the signature Nike logo snakes into a pipe. “NOT AIR,” Abloh captions allusively and elusively. This is not merely ironic commentary. By remixing the sneaker’s look, Abloh has sneakily made something else: not the “original” Nike logo nor the brand it represents, not the Magritte alluded to, not the platonic essence of “air”. Abloh’s readymade prototype makes an addition (what Derrida would call supplément) that unmakes its referents by negation. All up in smoke.

“Fashion,” as a verb, is making (from the Latin: facere). Abloh’s deconstructive vision provokes for me a line of questioning: Do we make fashion or does fashion make us? Can we unmake fashion, without unmaking ourselves?

A logo has a one-track mind, tries to stake an essential, reductive identity—not that of the consumer, but that of the brand. The aura of the luxury product—cost writ inaccessible to the masses—asserts nothing but the value of its own name, cajoles the consumer to bathe in the glistening light of its signature, borrow its value by extension.

So what is subverted when Abloh staples a piece of paper with “LEWIS VUITTON” to the back of a found jacket? What does an error look like in the mirror? Does the reflection bounce? A communication failure occurred during the delivery of this message. Error: recipient does not exist. Who might be addressed instead by Abloh’s misnomer, who might step up instead? Does Off-White’s intentional misspelling make an opening for a missed audience?

Another Louis. When the French Marxist Louis Althusser introduced interpellation—the social process by which ideology forms subjectivity by calling to the subject—his textbook example was a police officer calling out “Hey, you.” A nameless address. Who turns around? Not addressed: the racial politics potentially at stake in this scene.

We enter into a gallery room labeled Black Gaze. The neon welcome sign: “You’re obviously in the wrong place.” Below, a tableaux of four Neoclassical style statues of young Black men in various positions of repose (leg crossed, leaning against a wall)  (kneeling on the ground) (contrapposto) (sitting reclined, legs sprawled), each potentially liable to be accused of “loitering” at a high end store or runway. The line is sampled from Pretty Woman, but here it is recontextualized, imbued with a different racial consciousness. Its unwelcoming message echoes Frantz Fanon’s analysis of society’s unconscious correlation of Blackness with “wrongness.” Yet Abloh’s sign slips this signification, resisting its dehumanizing accusation by way of wordplay: notice how the different lighting brings out the word sly from within “obviously,” a coded double naming which gives the Black men another more positive interpellation.

Or does the subliminal “sly” point to yet another slip: are you, the gallery viewer, in the wrong place (in my case: a white person in a black wall gallery)? Capacious, ambiguous you—Abloh’s trickster double meanings, unmaking and remaking the power scripts of the room.

Deconstruction unpacks speech by literalizing the metaphoric, creating a double. (This is how Virgil Abloh’s signature quotation marks work, too.) By extension, we arrive at the crux of Abloh’s title: figures of speech are not so figurative; rather, speech figures us. Is there anything outside logos? Can we escape the logo’s commodification of self? Let’s not forget the MCA’s Prada pop up store that supersedes “The End” of the exhibition. One doesn’t have to be a cynic to wonder about the endgame; it’s no surprise that art and the market are closely yoked.

Okay, so the exhibition never escapes logos, but there is something interesting at the root of Abloh’s attempts to turn logos inside out. Scrapping the idea of logo as just a cover, Abloh plays again and again with bringing out instead what is on the inside.  Taking a cue from Ludwig Mies van der Rohe’s architecture (Abloh has a Masters degree in architecture), Abloh applies function-driven minimalism to the design world. From the iconic Yeezus album cover design to a skeletally exposed Pioneer CDJ turntable, examples of this undone logo abound in Abloh’s corpus. A “post-logo” logo, if you will, which doesn’t aim to transcend the logo but rather to make it speak in new ways—to speak of us, maybe even for us.

Consider a prototype for a transparent luggage bag. (Imagine the expedience this would offer TSA personnel…) There are no tags, no monograms. What matters is not the luxury bag’s skin but what’s inside. What’s your baggage? Both literal and figurative, of course. By using the consumer product, as the wall text suggests, “you become a performance art piece.” Your stuff exposed, serving as your logo. The public and private blurred. Wouldn’t you feel naked?

At the Q&A, a reporter asked Abloh if he could imagine a future without logos. The whole room went silent, feasting hungry eyes on the god of logomania himself.

The answer, surprising only for Abloh’s unabashed transparency, was no.

Featured image: Virgil Abloh (at left) posing for photographs and media in front of his mural for the MCA exhibit Figures of Speech. Photo by Ryan Edmund.

Noa/h Fields is a genderqueer poet and teaching artist. They have written for Filthy Dreams, Telekom Electronic Beats, Anomalous Press, and Scapi Magazine, among other publications. Their first poetry book WITH is out from Ghost City Press. They are fond of techno and avocados.