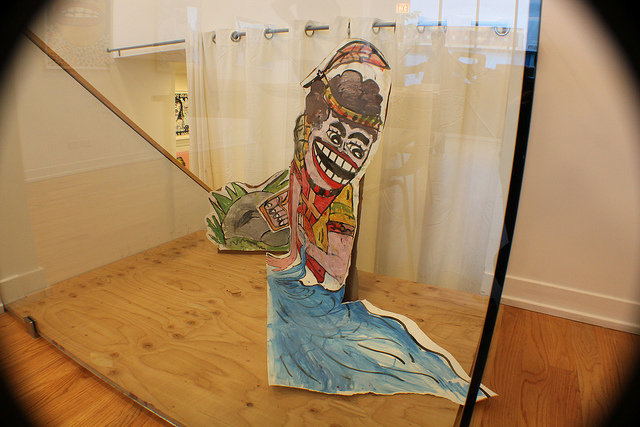 “Part reptile, part human, maybe they are angels,” Goons mused. He was reflecting on his creatures, also called goons, who he obsessively paints and draws in different settings, guises, outfits, and identities. The goons, marked by their iconic giant open mouths with thick lips, are electric, psychedelic, and whimsical creatures. Opening on October 5th, Welcome to Goonswood presented a prospective landscape peopled by Goons. In the interview I conducted with the artist, Goons the artist and goons the visual creatures he produces often melded and collided in our conversation, becoming one and the same, or sometimes different. Goons’s relationship with his art reminds us of the complexity of any art practice, but particularly art making with such an intimate relation to publicity. His work is simultaneously a scream for attention, with loud colors, fantastic scenes, and humor, and an illumination of the decidedly ordinary and universal capacity for spaces and people, to be lit up with creativity. Using rough surfaces, a manic process, and raw looking creatures, Goons expresses a utopian model of public art work that is both accessible and mystical, fun and meditative.

In this piece I focus on Goons the artist and Goons the creatures as a new form of being, and a new model for community, which has implications for the way we can think about energy and space. I want to bring into relief some of Goons’ comments on his artwork, not necessarily as a way to understand some deeper meaning. In talking about criticism he has gotten for his work being “childish” he explained: “I would rather people not truly be able to explain my work, but rather, check it out, experience it for themselves.” I will focus on the history of the goons, who and what they are (and aren’t!), and the kind of spaces they inhabit.

Hailing from Vermont and painting for seven years, Goons is an artist that blends the far out with the ordinary, proliferating creatures called goons, who are other worldly “angels,” the next level of human development. Working synthetically, initially in found public spaces and through a variety of mediums, Goons understands art to be an energetic alchemy. He explains: “When I started seven years ago, I wanted to create something that I didn’t have to wait for people to see it.” Beginning with wheat pasting and stickers, Goons emphasized his early obsession with immediacy: “I started with posters because…you want people to see the posters, and then the stickers…and be remembered.”

The goons are fascinating creatures. My sense in seeing them was simultaneously that I had seen them before; they were meant to be, but their excessive mouths, bulbous bodies, and frequently bright visages and environment created a fluorescent glow that makes them seem almost other worldly — far out and right there, all at the same time.  Trying to impose some sort of logic on what clearly are fantastic, logic-defying creatures, I began relatively chronologically, asking Goons where the term came from. He laughed, explaining that his grandmother used to say that “people who didn’t contribute to society were ‘goonies.’” So, to call his creatures “goons” is to “take something that has a bad association.  Something rotten…like ‘sick’ meaning cool…it bring[s] something unnoticed to the forefront [because] when something is the scum of the earth, there is still this potential…” Goons are the creative and dynamic potential that emerge from the most degraded landscapes.

“But who are the goons, specifically?” I pressed. Goons emphasized what goons don’t do. “They don’t really talk, because they don’t have anything to say. They just breathe and are peaceful. Even though [goons] are big people they are mellow…like angels.” Offering not just a new vision of humanity, but of communication, the goons reference perhaps the inefficiency of verbal communication, elevating the felt and gesture to a higher plane. Goons explains further: “Goons don’t necessarily talk very much, they just communicate without talking.  They represent communication but not [necessarily] verbal communication…” True enough, a goon painted on a three foot by four foot piece of paper, glued to a cardboard base and torn to create more balance, was placed in an alcove above the stairs to the lower level of the gallery. The alcove had an unfinished piece of plywood at its base, and the raw goon, done “like my street pieces” Goons noted, was nestled in. In the vibrations from the air, the steps of viewers, and the music, it very gently swayed back and forth, quietly breathing.

Unsolicited, Goons gestured to the fuzzy line between the artist and their work: “All art is a reflection of the artist, and it can be imperfect or perfect…every creature has the whole inside of that…the [goons] lips signify that.” The lips, he added, are “like…a new species.”

By creating “millions” of goons, “each different,” Goons’ characters are visual mneumonic devices that can infuse a variety of urban landscapes. Goons characters are color saturated, electric, and psychedelic. The process of creating goons is also an experiment with energy, embodied memory, and playfulness.

The goons, Goons explains, are “always right outside your eyesight.” In picking a spot to put goons on the street, Goons searches out the most low-grade, run down spaces:

You just kind of feel it. You just see something that’s run down, and it’s like, alright, I could bring color to that. That’s what a goon would like. A goon doesn’t want to live on the side of a skyscraper. There is already a lot of energy going on there. He wants to live somewhere where energy has been, because he can bring that back out. So, an abandoned storefront is perfect, because there has been so much commerce there, and maybe this is just the representation of what’s left, but inside his [a goon’s] mind is all the memory of what [was there]. I feel like when you look at a store that was a bank, you can kind of feel that it was a bank. And you can kind of feel that [and] all of the transactions have taken place there. To be able to put a face to that, that lets me feel that on a whole other level. On a level I always wanted. Since I was a kid…that’s what I imagined in my head. I feel that nothing ever really goes away. So I wanted to show that. And that’s why street art was like “Oh damn,” just so real.

Goons then are like spirit mediums, channeling the energy of spaces past their prime and reminding viewers of the history and memory stored in the bricks and mortar of even the most dilapidated of sites. Goons’s method then is what I would call a kind of kinesthetic sense-making. He “feels out an environment” in order to decide where and when to put goons on the street.

One might wonder, though, what goons are doing in the pristine and very sleek Maxwell Collette Gallery. Goons responded that goons are flexible beings, they “are just moving around from place to place, and wherever it lights up, they could be. Wherever they can be accepted or needed, that’s where they can be, very much like angels.” These earthly mediums also carry traces of the street with them. Goons noted that with such creatures he can “bring the street with” when intervening in the gallery. The intimate space, consisting of a ground level floor, lower, and upper level, was crowded with at least sixty people during the opening, each spending time looking at, laughing about, and talking about the goons. Being able to “get really close to the work,” and make it part of an itinerary, rather than encountering it unexpectedly in the wild does not necessarily domesticate the goons, who continue to breathe, laugh and exude a wild energy. The creatures, per Goons, “are always who they are.”

Goons the creatures, however, are capable of transforming to suit different urban environments. In addition to Chicago, Goons has done street work in Los Angeles, San Francisco, and New York. Each urban environment demands a different alteration to make goons achieve the fullest possible impact. Goons clarifies:  “[In] New York City …you have to stand out.  There is a lot of art there and I think that the bigger the better. [In] San Francisco everything is super colorful so almost losing some color could make you stand out. And LA is just a potpourri of celebrity oriented art, so I feel like the more folk you can get, [the more of] your own references you can bring, is actually ironically more celebrated than just doing stenciling.” Goons and goons make do with the environment at hand, much like “building sandcastles at the beach” by being open to the available materials at hand, more is at hand.

The Welcome to Goonswood show at Maxwell Collette offers a strong example of how bringing street art into gallery spaces does not have a neutral effect on the work, but is not necessarily fully decontextualizing. The images Goons produces have their own power, and ability to communicate, based on his having developed an iconic figure that works precisely through its strong visual energy and dynamism. They just breathe, wherever they are. They just breathe, wherever they are.

Learn more about Goons and his recent exhibition, Welcome to Goonswood, by visiting Maxwell Colette’s website at maxwellcolette.com. Or visit his website at goonswood.com.