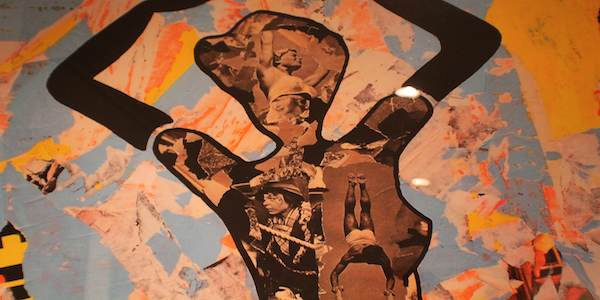 If one walks for more than five minutes nearly anywhere in Paris stumbling upon street art–  Space Invader’s retro videogame characters above street labels, Levalet’s site specific figures, or the alien-like profiles of MG La Bomba– is almost inevitable. Yet, like graffiti, it is a form of public art that is often depicted as a masculine endeavor. Galerie de Art Urbain’s recent exhibit, Femme(s) & Street Art, seeks to correct such a public image by exploring works by female street artists largely exploring representations of femininity in literature, cinema, and popular culture.

Running between March 8 and March 29th the exposition consists of work from FKDL, Stoul, Nathalie Victoire, Vinie, Doudou Style, Jessica LeGuillon, Shaz Arts, and Tony Run. It was released in parallel with a separate exhibit in the halls of the 10th  arrondissement local government building which sought to display street art in a public space open to a more general audience.

A collage aesthetic dominated, some including the face of celebrities as the face of figures, yet others had generalized bodily shapes that were filled with newspaper and magazine images, perhaps gesturing to the way that media colonizes our bodies and minds.

In the collage pieces 1950s media prevailed, alongside anglophone comic streets with snappy quotes like: “Great sufferin’ snails its a girl! And whadda girl!” positioned alongside blackbook pieces and more abstract drawings.

Stoul’s work featured anime style female figures in brightly colored clothing, many in close ups, and one in collaboration with FKDL where Stoul’s iconic figure stands in for Marilyn Monroe, her dress composed of clippings about the starlet. Is the piece a commentary on the way in which, in street art culture, female members are often sexualized, demonized, or lionized? Or the intense influence that U.S. media has played both in the street art and graffiti movement and in global representations of femininity?

My favorite piece was SKDL’s play on Alfred Hitchcock’s “The Birds,” which included a background from the book version of the story, a cartoon figure of the Melanie character being attacked by bird-CCTV camera hybrids, pointing to the ways in which surveillance, both social and governmental, haunt women in and outside of street art milieus.

In the room below, Nathalie Victoire’s piece, “OdalisK” makes reference to Jean Dominique August Ingres’ 1814 work “La Grande Odalisque,” which also in art theory and criticism is marked as a key example of women’s objectification in the plastic arts. OdalisK is joined in bed by two graffiti characters, industrial and lustrous, modernizing the scene slightly. Does the appearance of the characters change the fact that the figure is still the object of a sexualizing gaze? The scene is ambiguous, pointing to the murky terrain that female writers navigate on a daily basis.

Offering little resolution, the exhibit offers a diverse look at how one might imagine the feminine in street art, and the multi-medial approach taken to create a snapshot of a complex, ever-evolving art scene.