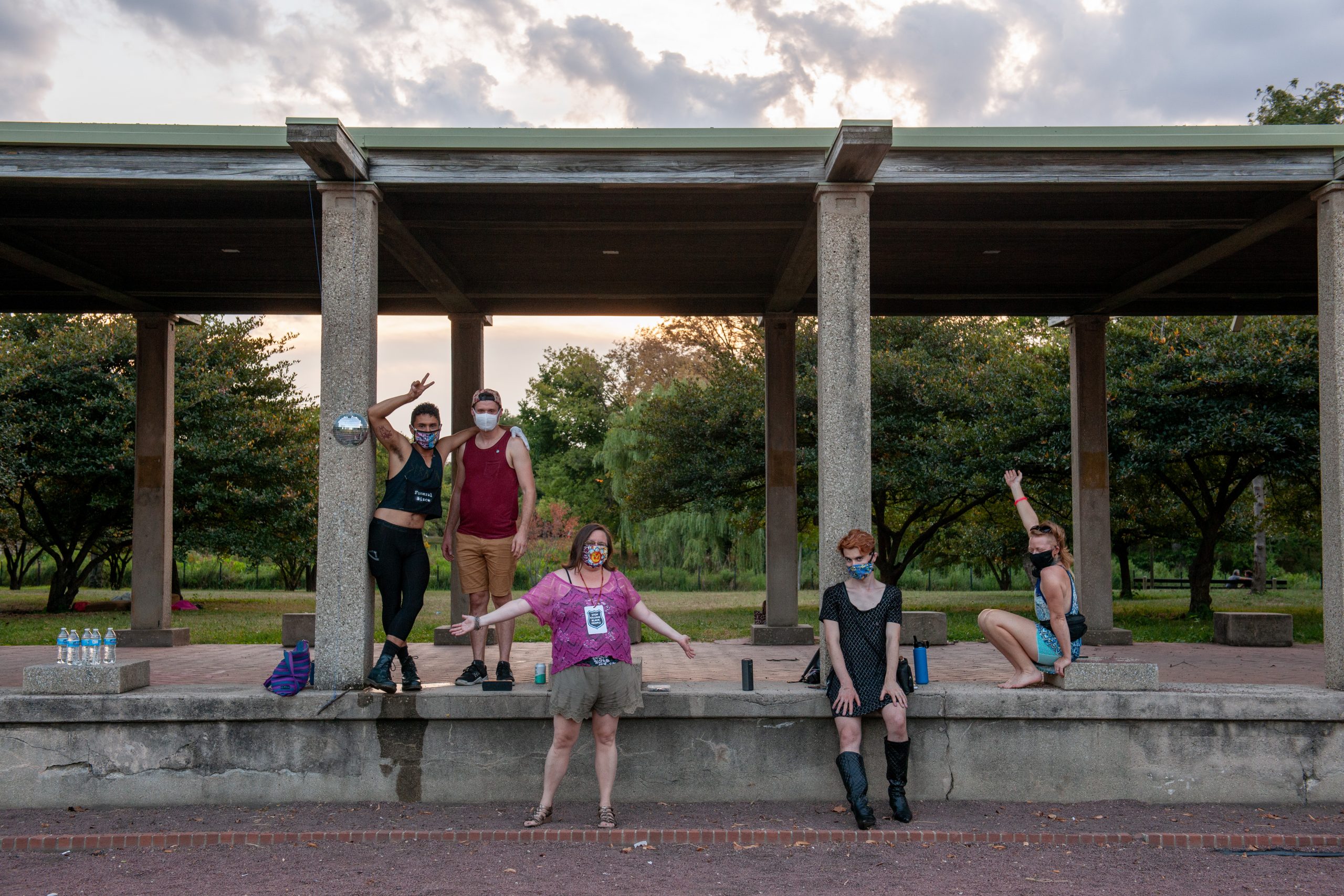 One of the first buzzwords to emerge from the pandemic was “mutual aid.” Quarantine’s stakes of survival reminded many of us of our fundamental interdependence, and the lack of coordinated leadership called for us to have each other’s backs out of necessity, compelling us to take care of each other in ways that our government refused. Of course, mutual aid is not something new that emerged out of a vacuum. DIY artist communities are one model for collectivity, for an alternative economy of care and co-creation.

I couldn’t bear the thought of DIY becoming extinct in the midst of the global pandemic. Pre-pandemic, apartment galleries, basement punk shows, poetry readings, raves, afterparties, and other forms of underground events were vital forms of creative community-making on the margins of the mainstream. These are lifeworlds, and they sustain us. Unfortunately, most of these subterranean activities cannot translate safely into a COVID world. And every Twitch dance party I’ve been to pales next to IRL clubbing.

Months into missing all of this, my roommate and I banded with a few other artists and writers in our neighborhood of Humboldt Park. Each weekend, we gathered in the park by the lagoon for potlucks and discourse. Our conversations touched on our mental health, labor organizing at the various cultural institutions and schools some of us were involved in, ongoing protests, and our responsibilities as artists, curators, and space-makers to each other during quarantine. We were forming a collective. J comments “performance as a rehearsal/score for revolution.” I say something about “communal syntax.” C suggests that we draft an acknowledgment of place. M suggests our collective’s name: Touchless Entry. Eventually, we started planning events.

What does it mean to share public space in our new quarantined context? What could it look like to activate the park space with socially-distant poetry readings or dance parties? Summer still being in full swing, we wanted to take advantage of the outdoors as a safer space for masked socializing. We thought of the park as a site-specific installation space, and engaged with the history and geography of our chosen theatre.

From our acknowledgment of place:

Most of the members of Touchless Entry collective live in Humboldt Park or adjacent neighborhoods. This project is site-specific in its public engagement with art-making in the park. Humboldt Park is named for Alexander von Humboldt, a German biologist at the turn of the 19th century, who never set foot in Chicago. He is remembered as the first person to acknowledge human-caused climate change. The park was developed by William Le Baron Jenney in 1869 and was annexed by the city of Chicago that same year.

Humboldt Park occupies the indigenous homelands of the Council of Three Fires (Ojibwe, Odawa and Potawatomi Nations). Indigenous people continue to live in this area and celebrate their traditional teachings and lifeways. Today, Chicago is home to one of the largest urban Indigenous communities in the United States and this land remains an important place for Indigenous peoples. To view an interactive map of indegenous lands visit this link: https://native-land.ca/.

Our first event was a Cruising Poem for Walt Whitman. This event was co-produced by Red Rover Reading series, in lineage with their previous outdoor walking poems. We hosted this event outdoors in an area of the park known for gay cruising. A chorus of eight poets, nearly all poets of color, many also queer, stood on rock pedestals that were distanced nearly 20 feet apart around a huge circular track. They read simultaneously, overlapping. One was a sound artist, playing a found tape of Whitman reading. A nightlife historian read from a zine on queer futurity. Another poet, prudently, brought a bullhorn. Audience members, including some unsuspecting passerby, paraded around the track to catch snippets of them all, pausing to lull in the grass. We also placed books on pedestals for anyone to jump in and participate. Besides the distancing measures, we made sure plenty of water bottles, hand sanitizer, and masks were readily at hand.

The need to mourn, but also to dance, resist, and share collective joy led us to organize an outdoor Funeral Disco. We thought about the rich and irreverent tradition of  ACT UP political funerals, “Ashe Actions” or “AIDS mourning publics,” intended to make loss and grief ignored by the dominant political and social forces matter to an indifferent public, making private grief public. Funeral Disco summoned these spirits and the far too many others lost at the hands of a callous political regime and inhuman capitalist juggernaut. In the spirit of the late disco goddess Sylvester, we let the living dance hand-in-hand with the dead.

The collective and friends brought headphones and bluetooth speakers to the park at a secret location to dance as the sun set overhead. One member even hung up a disco ball! We broadcasted a specially commissioned DJ set by Jared Brown and a video by Wanbli Gamache, with sonic interventions the collective collaboratively recorded, including our acknowledgment of place and various public health rejoinders. All in all, about 25 people came in person to join us in a large grassy area in the park, and over 200 people tuned in remotely via Mixcloud.

Touchless Entry’s events were an experiment in intimacy and collaboration under unprecedented circumstances. We were grateful for the chance to get to know our neighborhood’s park more personally, as well as each other along the way. As the seasons shift and Chicago gets too cold for outdoor events, it’s unclear what our next actions might look like. Perhaps we’ll take our neighborly art gatherings online, or perhaps we’ll brave the weather anyway. Or perhaps those two public events mark the bookends of a story which we’ll one day look back on with a smile, fondly reminiscing our pluck and collective resilience, how we not only made it through this pandemic, but even made art in its midst.

Featured image: A group of poets in various poses under and on a structure in Humboldt Park. Photo by Michelle Murphy.

Noa/h Fields is a genderqueer poet and teaching artist. They have written for Filthy Dreams, Telekom Electronic Beats, Anomalous Press, and Scapi Magazine, among other publications. Their first poetry book WITH is out from Ghost City Press. They are fond of techno and avocados