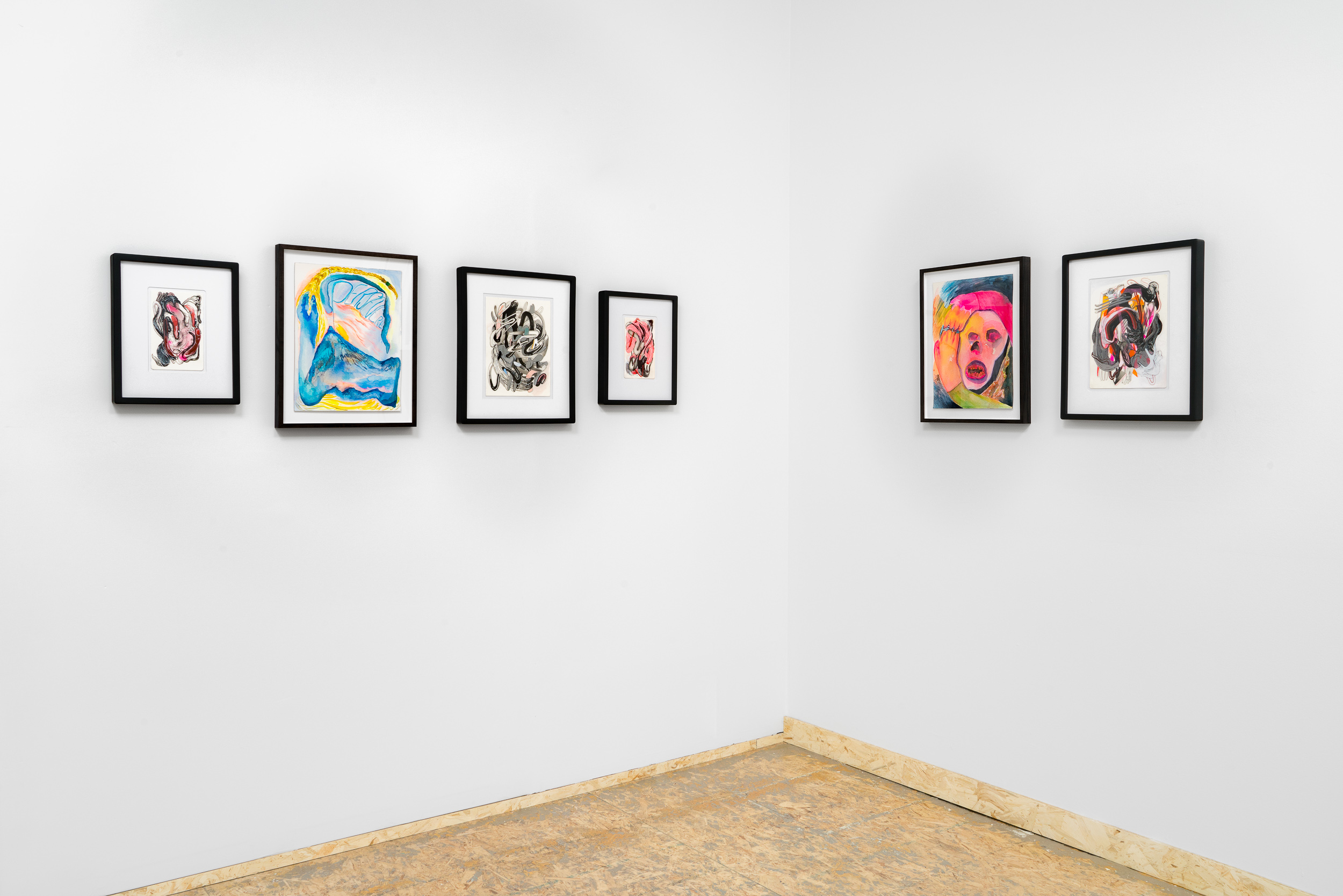 For the last five years, Cleaner Gallery + Projects has been part of Humboldt Park as an artist-run gallery and studio space. The gallery changed its name from Night Light Studios and Gallery to Cleaner Gallery + Projects and expanded programming in February of this year, under the direction of Ryan Burns. Due to an official stay-at-home advisory for the city of Chicago issued on November 12th, Cleaner Gallery + Projects had to reevaluate gallery hours to ensure everyone’s safety. I visited the gallery before closing to the public and spoke with Burns about the show. I was unable to meet with artists Mel Cook and Kelly Reaves, but we were able to discuss their two-person exhibition over email.

Reaves tells me, “I kept coming back to our identities.” Both artists are vehemently feminist, attractive 30-something blonde white painters with formal educations in art. Reaves notes that she acknowledges her privilege and place in a tradition of hyper-(self)sexualized “art school girls” now grown up, wrinkling and sagging, more matured and confident in her body and self-image. She says of herself and Cook, “We’re making work that’s weird and gross and carnal and kind-of violent— all kind of ‘conjured’ out of thin air, but it’s also just paintings on paper.”

A title like Torrential Hag fits perfectly in the trajectory of recent events, opening just after Halloween and taking place the week of the presidential election. Reaves tells me the title is meant to be irreverent and tongue and cheek, embodying a connection between the two artists’ work. Cook, who titled the exhibition, shared her thoughts behind it, Torrential Hag imbues a sense of historical and ancestral rage—perhaps one that is libidinal, primal, forbidden, and coded in gender.”

Perhaps the titular Torrential Hag is the one-eyed witch depicted in Cook’s painting titled ARE MY ONLY OPTIONS RAPE OR DEATH? The predominantly green profile of a witch occupies the majority of the pictorial frame. Chaotic, hot brushstrokes engulf the green and yellow negative space. To the left of the witch is the title of the work, sprawled in canary yellow, spindly letters.

When asked about the incorporation of the text, Cook informed me “are my only options rape or death?” is a quote from Anwanyu, the witch/heroine in Octavia Butler’s Wild Seed. In the novel, Anwanyu is hunted for generations because of her magical abilities to heal, and because of her race and gender, she is often only presented with two options:rape or death. Cook explains, “This really struck a chord with me. It is a generational trauma that we are still fighting against. Rape and death in the real or rape (i.e. rape culture) and death (femme erasure) as a more abstract form of durational violence.”

Cook is influenced by non-fiction texts such as Silvia Federici’s Caliban and the Witch, which serves as an intersectional roadmap of historical violence that ties the history of the witch and female genocide to the church, the state, feudalism, capitalism, and reproductive freedom. Visually, Cook is influenced by children’s illustrations and storybooks. She tells me her depiction of the witch comes from this source material that often serves as visual pedagogical tools where toxic ideas of femme identities are often depicted and addressed for the first time in childhood. “The history of rape and death is woven into the stories of the witch and genocide of the witch hunts that took place in Western Europe and within colonized territories.” Outside of allegories of the witch, Cook’s subject matter focuses on topics such as reproductive justice and looking back at the historical markers that have led us to this place in time.

The vague imagery comes from her unique approach to the subject matter. Reaves credits her college professor Gaylen Gerber for this influence. She explains, “He told me to stop illustrating my ideas and start embodying them. Like instead of painting a picture of people having sex, make sex. Or make a painting that makes you feel like you’re having sex. Something like that. I’m trying to channel deep, simple, basic feelings. I consider it [a] kind of post-postmodern expressionistic surrealism. I want it to be sincere but a little funny.” Her work accomplishes this through visceral renderings and gestures pulled from the fluid materiality of the inks and paints used, entering a subconscious space within herself.

A strength of the exhibition comes from the pairing of works that feed off each other’s angsty and seductive aesthetic. Reaves’s dense forms are nested and wound through intestinal looping that bears similar pops of fluorescent color to Cook’s paintings that sit beside them. Reaves tells me “It was Mel’s idea to go with a ‘buddy system’ as we were installing the show. Most of them are hung as pairs—one of hers with one of mine—and I love the way they relate. For example, we have my Pervert leering as her sexy topless lady (A Study for a Monument of Genius).”

A Study for a Monument of Genius is a fragmented portrait of a blonde bare-chested woman. The image is rendered in fleshy pink and warm yellow watercolors. Cook’s inspiration for this image comes from a critique of white feminism while looking at monuments such as Mount Rushmore and thinking about the horrendous cultural genocide that the United States is built upon. “What is more horrific than seeing the faces of people who murdered and enslaved your ancestors being carved into your sacred place to celebrate freedom? It’s absurd. It’s horrific. As a white woman, I have to contend with this. White women have historically played a role in oppressing and simultaneously being oppressed, and white women are still denying this.” Another objective of Cook’s femme rendered monument is to imagine what our world would look like with equal representation.

An additional interconnection between the artists is their use of color. The curation pulls disparate elements together to create a tableau of relatively small, brightly colored, water-based works on paper that embrace femme sexuality. Cook shared her thoughts behind the coded chroma of her paintings. “I use a saturated palette that often feels femme, bright and colorful—a marker of naivete, otherness, femininity, decoration…etc. It is all coded in gender. I like to make beautiful paintings that feel seductive and let the viewer become lost in space before they realize that the image is addressing something very dark.”

Reaves’s design-centric works employ flesh-colored gastric shapes and bodily properties. Her overall use of color is more subdued compared to Cook’s. Reaves will use fluorescent pink if it’s tempered with a lot of neutrals. A stripe of red or a fluid wash of luminous pink goes a long way in an otherwise grey-scale composition. “Skin tones and blood/guts colors have a better chance of making it into the final painting, but each image contains a multitude of versions that have been painted over. I think the excessive labor of that plays really well with the immediacy of Mel’s process. Hers are transparent (literally) and unapologetic.”

Both artists work instinctively. Cook’s paintings, though heavily researched, are filtered to combine imagery and text with loose gestures and open planes of color. She says of her intuitive practice, “I very rarely start with a drawing or even have an image in mind when I begin a painting. I often start with a ground or a wash of color and then begin to respond. I let my mind wander through the texts I am reading and images begin to appear, like a child looking for images in the clouds. Then there is a moment when I have to guide the painting to completion.” Similarly, Reaves’s excessively labored images derive from a hyperactive inner dialogue on topics such as death, decay, disgust, desire, sex, absurdity, comedy, politics, and the sublime.

The process-driven nature of Reaves’s imagery is a subconscious response to chaos and uncertainty where the tangible meets the ambiguous. She tells me the illusory space of her paintings come from divergent aesthetics based on mood or chance. Reaves employs an intuitive automatic-drawing style that might be likened to the act of journaling. “My studio process and conceptual drive used to center around sentimentality but that just didn’t feel right anymore after the 2016 election. Frustration drove me to look inward and my studio practice became much more internal and meditative.”

Torrential Hag explores the rage, grief, and frustration of existing in a patriarchal society and speaks to the femme experience of navigating sex, power, and just having a body.

Mel Cook and Kelly Reaves, “Torrential Hag” is on exhibit at Cleaner Gallery + Projects now through January 9, 2021. Appointments can be made through the gallery | cleanergallery@gmail.com Please check the gallery’s social media for the possibility of cancelations and Covid updates. Typical gallery hours are 12 – 3 pm on Saturdays but may be subject to change.

Featured image: A gallery view taken from a corner angle. Hanging on the wall to the left are four works on paper, each framed and matted. From left to right: An abstract composition in black, bright pink, and red, titled Clown by Kelly Reaves, ink and gouache on paper 8 x 5 in. An abstract, semi-representational watercolor painting by Mel Cook titled Persevere (Another Motivational Poster for Surviving Patriarchy) 14 x 11 in. The painting features the word Persevere in blue, a hand, a mountain that resembles a woman’s breast in the same color, and a blonde braid. Another abstract piece by Kelly Reaves, a warped three-dimensional image primarily in greyscale and soft pink titled Mr. Nice Guy, 12 x 9 in. Bubble Trouble, by Kelly Reaves, ink and gouache on paper 8 x 5 in. Fluorescent pink wave of color and shape. On the wall to the left, hangs two framed works on paper from left to right: Cry For Help by Mel Cook. A 14 x 11 in. Arms cradling a brightly colored skull in greens and pinks. The word help is written between the fingers. Next to Mel’s painting is a piece by Kelly Reaves titled Taffy, 12 x 9 in. The drawing depicts dark loops that intersect with bright orange and pink shapes. Photo by Robert Chase Heishman.

Lauren Iacoponi is an artist, curator, writer, and arts administrator living and working in Chicago, IL. Iacoponi received her MFA from Northern Illinois University with a Certificate in Art History and her BFA from Columbia College Chicago with a Minor in Art History. Iacoponi is the Director and Founder of Purple Window Gallery, an artist-led project space coming soon to Avondale and the Director and Co-founder of Unpacked Mobile Gallery.
Instagram handle:@lauren.ike