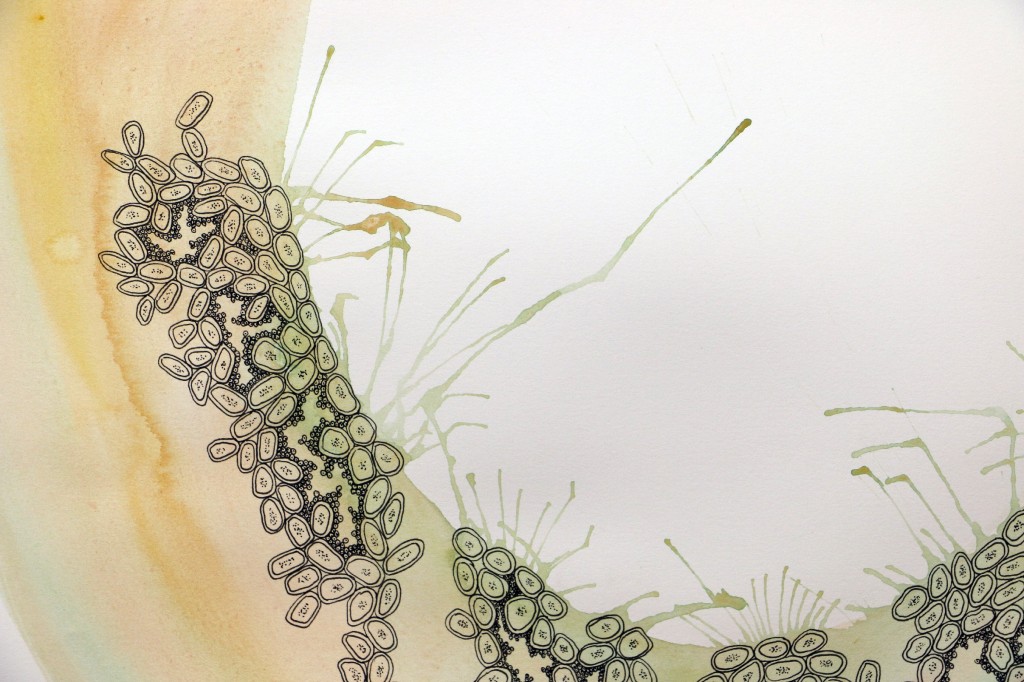 We are born in the red: amongst the blood and flesh of our mothers—already indebted. What we owe our families—a debt of the body. And slowly the circle widens. Our debts to our friends: the price of acceptance; our debt to our communities: the price of civilization. Then come the banks, with credit cards and student loans and car loans and home loans and loans to pay off other loans until the entirety of our life is one big red circle of debt.

Like genes in the body, ideas make up a culture through a process of replication, interaction, and mutation. This is the basis of Richard Dawkins’ concept of the meme, which he defines as an “idea, behavior, or style that spreads from person to person within a culture.” But the strength of a meme—that is, the extent to which it has taken hold in society—does not denote any moral quality, or even suggest that it is the best, most efficient way of living. Instead of a healthy cell, an idea may be more akin to a cancer or an invading virus, propagating to its own benefit even as it kills its host.

There is one such meme virus that has reached pandemic proportions: the culture of scarcity. It has produced a disease that has taken hold of every facet of our lives, from our most public selves as citizens to our most intimate relationships. The culture of scarcity is an individual and social belief that there is not enough. That resources are limited and thus survival depends on competition. It is a starvation economy: accept the conditions or be subjected to social death. And so we are left in a perpetual state of fear and want. Fear of backsliding, fear of drowning, fear that at any moment the precarious balance we have struck will topple over and we will be lost forever. And in this fear, we reach out for more: because more leads to more. The nicer clothes will help us network, the nicer car will make us seem less desperate, the nicer TV will ensure we have more friends, the nicer home will make us feel more secure. And so we end up in a strange alternate universe where millionaires think they are scraping by, that they must wrangle an extra percentage point in tax breaks year after year to satiate the fear and want. We, as a culture, have no conceptualization of what “enough” looks like, and so we cower in our homes and allow the rich to slowly consume us all.

This is not healthy. This is a state of social sickness. A state in which the wealthiest country on the planet cannot afford to provide quality education to its children, cannot afford to fix its bridges, fund its public transportation, fulfill its obligation to its people to support health, security, and general well-being. A way of thinking that says, in order to have the best healthcare system in the world, some people must make due with the worst, or none at all. That in order to have the biggest houses, the most pristine neighborhoods, some people must be homeless, and some must live in a warzone.

In the art world, the culture of scarcity runs through our veins. Each year a freshly minted cohort of artists are jettisoned from their institutions to fight over an increasingly shrinking pool of resources. Tenure-track teaching positions become adjunct gigs, grant money dwindles, the cost of residencies rise. This is our fever: the constant grind of applications and contract work, squeezing our artmaking in during our “free time” which isn’t really free. The nausea of seeing the accomplishments of our peers as a denial of our own worth. And perhaps the worst symptom—the keeping up of appearances: flitting from one event to another, not only professing that we’re not sick inside, not constantly exhausted and emptied out, but insisting that we are at peak health, that everything is wonderful, and aren’t these canapé’s great?

As cultural epidemiologists we must identify the sources of the outbreak and trace the chain of transmission. We must determine the points where this chain may be disrupted with immunization. Let’s delve in and trace it back to its source. Those infected with the culture of scarcity believe that the only labor worth compensating someone for is labor we don’t enjoy, labor devoid of love. So our practices are either transformed into work worth being paid for—a labor of soul-deadening unhappiness, an art that is the equivalent of pushing papers around on a desk—or we work for free. Thus, one carrier of the virus is the logic of late capitalism, and a lack of critical engagement with the cultural meaning of labor in an increasingly mechanized global economy.

The chain of infection runs deep and spreads like an infinite web across the globe. Different carriers lying dormant at different points across space and time, allowing the virulence to build towards complete domination. And what was patient zero, the fount from which all the vectors spread? We could call it bodily debt, the idea that our lives are not our own, that they are a limited commodity, and that our relationships are built on the exploitation of that commodity, with balance sheets neatly kept. Patient zero is that body that made itself dominant through the belief that it has a right to the body or life of the other, whether through social injustice, bondage, imprisonment, torture, rape, or murder.

Immunity: protection or exemption from something, especially an obligation or penalty. From immunis, free, exempt.

Art, at its root, has always been opposed, in one way or another, to the debt of the body. It is a gesture towards abundance, excess. If art is truly a space for our culture to dream, then it is a vital point of inoculation against the culture of scarcity. Art is outside of, and thus speaks back to, the necessary toil of survival. It is there to pick apart every base assumption and build something new from the rubble. It is the site of our immunity: the culture of abundance.

A culture of abundance is built upon the idea that our society is structured not around debt, but around sharing. That we are each overflowing with human potential. It says that in that excess, we must be promiscuous: indiscriminate, without order. Pro (forward)-miscere (to mix)—to mix forward.

This meme, the culture of abundance, stands against the material realities of much of Western Art History, and Western History in general. It is a logic of the margins: taking shape in queer collectives, indigenous memories, POC-run spaces, and feminist dreams—the fraught, messy, interstitial spaces. The places we find ourselves when we are on the edges of things, on the precipice of a great chasm, where we reach out for the hands of those closest to us, because we know that in that moment when we feel as if we have nothing, it is then that we release ourselves from our bodily debt and find abundance in each other.

The new vistas of our imaginations: how can we locate and live in spaces of abundance in our daily lives? How can our practices as artists push this imagination forward? How can we as an art community mix-forward responsibly? How do we address hierarchies at the foundations of our culture without reproducing them? How do our institutions become abundant? Our politics? Our global culture? These are the vectors that will travel out from the culture of abundance, replicating themselves from body to body, propelling us into the future.

Maya Mackrandilal is a Chicago-based artist and writer. She is a current HATCH artist in residence at the Chicago Artists Coalition. Her work was recently on view at THE SUB-MISSION in Chicago and Smack Mellon in New York. She received her MFA in Studio Art from the School of the Art Institute of Chicago and a BA in Studio Art from the University of Virginia. She tweets about art, race, gender, and pop-culture @femme_couteau