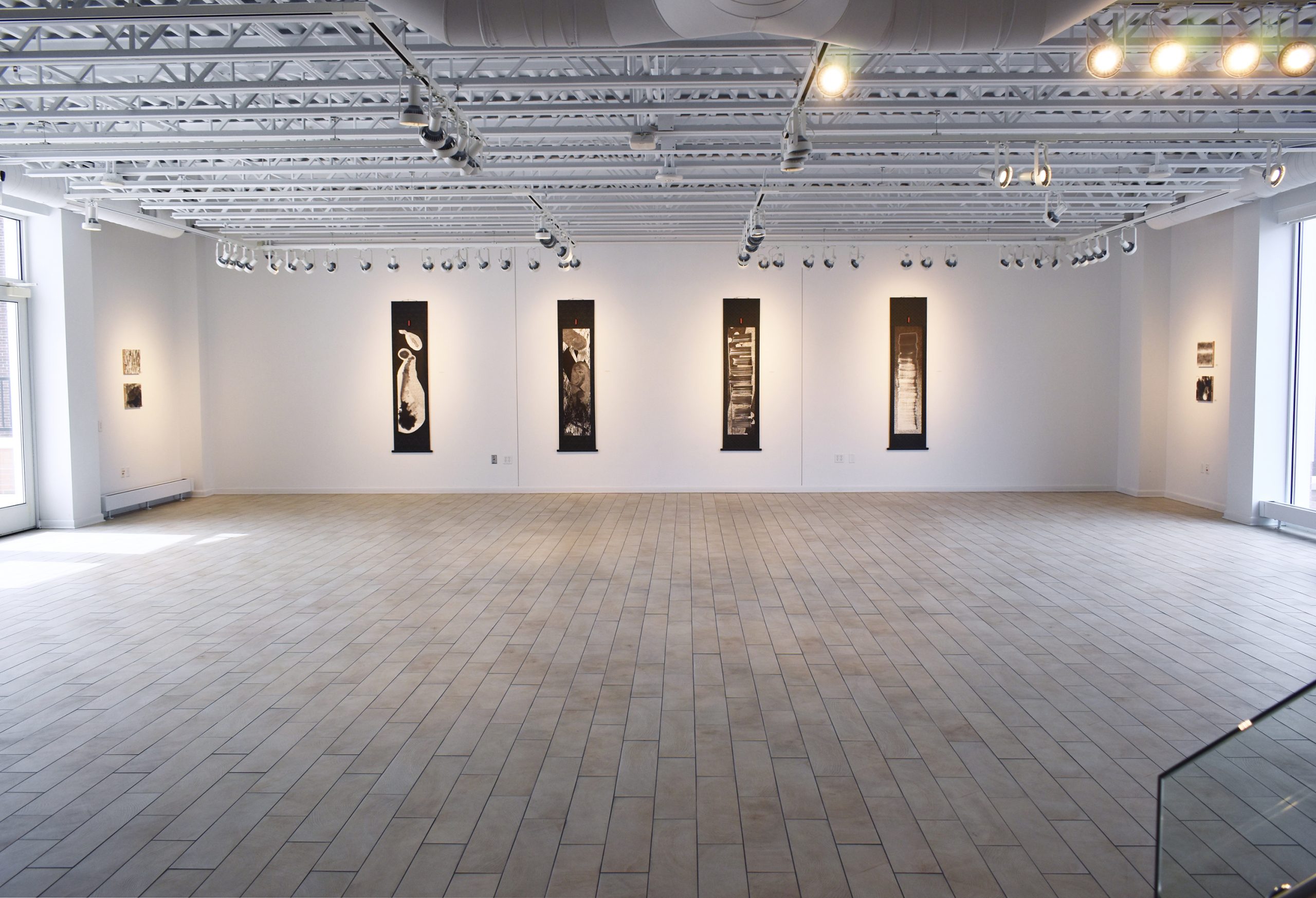 As an artist who is deeply invested in my community, I have made long-lasting relationships with my fair share of creators by simply attending gallery openings, events, and art-related happenings. I have found that these settings make it quite easy to spark up a conversation with anyone in the room. In the Milwaukee art scene, Midwestern folks are more than willing to crack open a cold PBR in a garage gallery with a complete stranger and talk about local headlines. One can make fast friends this way. It’s unfortunate that networking with artists has been added to the list of things that have been made difficult by the pandemic. While the art world certainly came up with some unique and productive solutions to hosting gallery openings over the past two years, conversing with someone from the comfort of your living room over Zoom just doesn’t hold the same collective energy as sharing physical space and an actual beer with another artist at an exhibition opening.

However, the nature of the virtual meeting somehow presented opportunities that didn’t seem possible before Covid. It’s like location didn’t (and maybe still doesn’t) matter anymore. Artists from all over the country began finding ways to participate in art communities beyond their own. Maybe this pandemic pitfall actually became an eye-opening way for us to connect and network (even if that meant I couldn’t share a cold PBR in a Milwaukee basement). Throughout the pandemic, I attended an array of virtual meetings, including a virtual conference for writers, gallery openings, and artist talks. Even amongst the endless barriers that Covid created, I managed to share virtual space with a number of artists over the past 1.5 years and was delighted at the relationships that were formed.

One virtual conversation that still resonates in my mind is with Nishiki Sugawara-Beda, a Texas-based Japanese-American artist. We connected because of her recent exhibition titled I’ll Be There at the Thelma Sadoff Center for the Arts in Fond du Lac, WI, which was on view March 18 – May 1, 2021. Connecting twice over Zoom, I learned about Nishiki’s authentic art-making processes, which she has developed over a span of 20 years.

Nishiki’s complex, sensitive, and bold paintings are made using Sumi ink, a medium that was traditionally utilized for calligraphy in Asian countries. Not only is her work made with this historic medium, but Nishiki has devoted her studio time to learning, sharing, and developing a practice of making her own Sumi ink by researching formal Japanese processes. Nishiki was born and raised in Japan, however, by her early 20s, she began traveling the world. Eventually, she landed in the United States, where she has resided ever since. Currently living and teaching in Texas, Nishiki is an Assistant Professor of Art at Southern Methodist University in Dallas.

A little over 10 years ago, Nishiki began utilizing calligraphic symbols as the content of her paintings. At that time, she was using Japanese phrases and symbols to create compositions by repeating their shapes many times on a page. The various forms created by the symbols of the language were combined with abstraction and color from paint, watercolor, inks, and various drawing mediums. A breakthrough piece for the artist is Kokorokara (2007), inspired by the Japanese phrase meaning “from the middle of my heart,” which Nishiki scribbled over and over again on the page. The fact that she didn’t have to invent the forms in her work meant that she could focus on creating the emotion and feeling of the works based on language. For her, it was and still is “important to make art authentically and express feelings from the bottom of one’s heart.”  She explains the Japanese idiom that acts as her personal mantra: “Onko chishin is a philosophy upon which my life and practice as an artist is based. It means “to learn from the old to produce new.”

In her recent body of work included in I’ll Be There at the Thelma Sadoff Center for the Arts, Nishiki’s paintings are made with Sumi ink and resemble landscapes with layers of textures, shapes, and atmosphere. Groupings of smaller paintings on wooden panels invite the viewer to examine closely. While they are exhibited beautifully as a group, each drawing retains its own character. Although the works are rooted in abstraction, Nishiki strives for ambiguity and intends for the viewer to understand them as spiritual spaces, like landscapes of the mind. The simplicity and beauty of the black Sumi ink against the gessoed panel invites your eye to follow the movement and patterns created by Nishiki’s mark making. Shapes start to emerge as clouds, water, or shadows.

Visiting her recent exhibition at the Thelma Sadoff Center for the Arts was one of my first art experiences post-pandemic. It was a moment of relief and true wonder, as I was able to physically view artwork in a space again–something I wasn’t able to do for a long time.  With an abundance of natural light, Nishiki’s work showcased in I’ll Be There was striking in the contemporary gallery space. Thelma Sadoff’s building is located in downtown Fond du Lac, WI. Built in 1906 and renovated in 2012, it was once a Masonic temple. The main gallery is on the second level and boasts floor to ceiling windows that sit next to a large, outdoor plaza that overlooks the street. On the largest wall in the gallery, four of Nishiki’s vertical pieces hang together. After learning more about her processes as a maker, it became clear that the vertical format of these drawings were inspired by the traditional scroll format found in Asian calligraphic works. Nishiki added her own touch–a red fortune teller–after the works were professionally mounted by a Japanese craftsman. The small red rod holds a fortune paper inside, another moment where Nishiki references her Asian culture.

Unlike her work rooted in language, the imagery for pieces in I’ll Be There come from a different place, lending themselves to something more spiritual and personal. Nishiki describes the process of entering a zone of “none-ness” before laying down initial marks. The paintings then build themselves, as she reacts and creates a narrative based upon her first marks on the panel. Since the ink is applied on gessoed panels, Nishiki can also carve into the wood to create textures in addition to watering down the ink to create washes. Her intuitive mark-making is symbolic of the journey to capture one’s identity, understanding of process, and respect for tradition. Her internal landscapes of the mind encourage viewers to discover one’s own personal histories through abstraction and process-based making.

Nishiki’s art practice revolves around ideas of sincerity, staying true to her process, inspiration, and intentions as a maker. In tandem with this authentic and genuine mindset, Nishiki stays true to form by learning, sharing, and raising awareness about the production of Sumi ink. Sumi ink is made from the soot of burned oil or other materials (like vegetable oil, sesame oil, or pinewood) and a binder, which is generally some type of animal glue, like rabbit skin glue. The choice of materials used to create Sumi impacts the blackness of the color; some inks appear cooler on paper while others might hold a reddish hue. Once created, the soot is combined with gelatin and placed in a mold that dries for one to six months and hardens into a stick form, turning it into Sumi ink. To use the Sumi, one rubs the hardened stick against a Suzuri stone with water, which turns the Sumi into liquid form, suitable for use with a brush. Nishiki states, “The process of making ink is meditative and used in calligraphy as well. If you need more [ink], you keep rubbing the stone and pushing it into the well for about 15-20 minutes until you have the desired amount. The history of this process is about 2000 years old and dates back to 600 AC, which is the time it was developed in Asian culture, specifically in China.”

There are also some recipes for Sumi that call for animal ingredients like turtle shell or deer hide. For her own art practice, Nishiki has experimented with making her own soot and gelatin. Through her research and travels back to Japan, Nishiki has built relationships with craftsmen in the Nara region who specialize in making Sumi through traditional processes. She says, “I want to tell everyone I connect with about Sumi, so the history and processes aren’t lost. Japanese companies and craftsmen are endangered because of the lack of knowledge of it.” Nishiki also regularly partners with scientists in the United States to continue to develop her own recipes and ingredients for Sumi. The ink is incredibly archival–especially when compared to liquid inks one might find today at arts and craft stores, which are highly synthetic. During her travels to Japan, Nishiki must practice persistence in communicating with Sumi experts. After spending so much time in the United States, she is often looked at by locals as a foreigner, as she does not know the most contemporary Japanese words or mannerisms and is often referred to as a “strange Japanese person.” Even with these challenges, Nishiki explains that after her calls and emails, she has earned the trust of Japanese craftsmen in the Nara region and they now enjoy teaching her about Sumi processes.

In addition to her understanding of Sumi processes, Nishiki remains very connected to her Japanese roots, respecting the essence of tradition and ritual that is so prominent in Asian cultures. Nishiki will regularly research various Japanese traditions, as well as observe and soak up materials for her artistic practices in order to connect more deeply with her identity and gain an understanding of where she came from. Nishiki describes her research and travels as a way to reconnect with her Japanese identity; one that has transformed ever since she put down roots in the U.S. Her explorations into traditional Sumi-making processes have become a way for her to feed creative tendencies, as well as celebrate the place she came from.

In her childhood, Nishiki’s mother wanted to make a cushion cover instead of purchasing one. She describes this moment: “We had a very small house and my mother brought in a gigantic loom that nearly took up the entire living room. She bought the silk, then dyed it, and started growing and raising silkworms. It was through watching and beginning to understand the development of silk that the idea of process became embedded in my DNA.” This moment has stuck with Nishiki, who now cherishes the sense of “earning” her process as an artist – something she applies to her Sumi ink production today.

Nishiki Sugawara-Beda’s work encompasses the wholeness of art-making, from physical materials to the final product. With great care, her authenticity shines through in each process, mark, technique, and conversation. As a Midwesterner, I am drawn to the sincerity of her mark-making and genuinely intrigued by her travels, research, and thorough development of materials and processes. I know many of us have grown frustrated and exhausted from the pandemic, myself included. I am, however, reconsidering how Covid has positively impacted our ability to network with other artists through the essence of the virtual meeting; thanks to my conversations with Nishiki and her philosophies around art-making, processes, and tradition.

Rachel Hausmann Schall is an artist, writer, and educator living in central Wisconsin. She holds a BFA from the Milwaukee Institute of Art & Design and has exhibited work nationally at many galleries and artist-run spaces. She co-founded the emerging artist grant and exhibition program The Grilled Cheese Grant and currently writes for the Wisconsin-based publication Artdose Magazine. Rachel Hausmann Schall also works as Curator of Education at the Leigh Yawkey Woodson Art Museum in Wausau, WI.