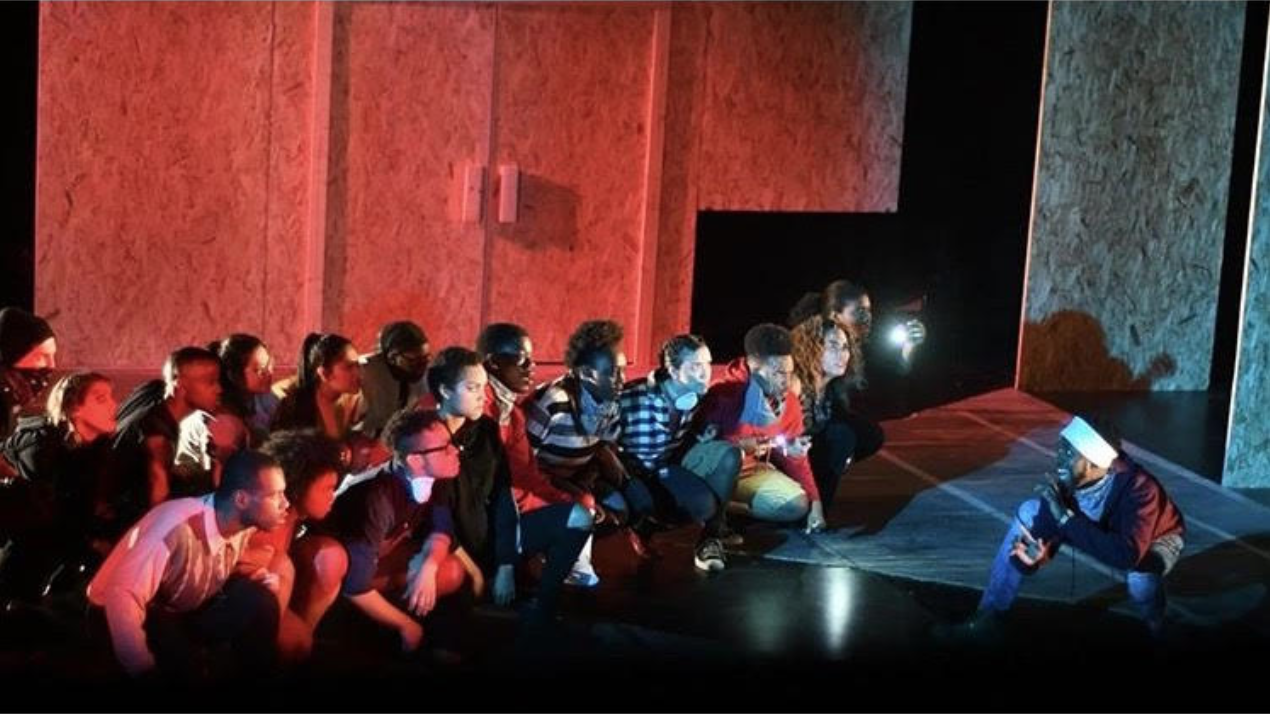 Wherever you go, there you are.

Directed by Derrick Sanders, Kristiana Rae Colón’s play, florissant & canfield, reminds us of this notion in a humanizing, loving, captivating, gritty portrayal of the untold experiences of the people in Ferguson, MO after Mike Brown was murdered on August 9, 2014. The play also highlights the fractured relationship between African Americans and the criminal justice system. It illustrates how the truth–your truth–is the only thing that transcends time and connects the webs in which we are all etched into. It’s why we use our voices and intentions to honor the ancestors. It’s also why Mike Brown’s name is honored after he was slain at just 18 years old for his Black skin and stature by a police officer on West Florissant Avenue in front of Canfield Green Apartments. Brown was unjustly accused of stealing from a local corner store while people were busy riding the bus to work, running to pick up their kids from camp, or just living their lives on that blazing summer afternoon. After Brown’s body lay in the sun for four hours, it was a community of Black people, Black queer folk, Black Women, Black youth, the marginalized POC who came to fight for justice and continue the revolution. The protestors understood why fighting for his life and the lives of other Black and Brown bodies was necessary. They decided that if there was no justice in Ferguson, there would be no peace. A person stands, in a warm spotlight, facing the audience. Behind them to the right, there is a group of people dimly lit in a blueish light. They all have their left hands reaching up toward the sky Behind all of them, in the background are wooden walls, freestanding and overlapping. Photo by Michael Brosilow.

Where an action occurs, specifically one marred in violence, the energy in that space is harnessed by those who come through it after. The energy on West Florissant Avenue drew in organizers, activists, college students, teachers, and everyday people of all ages. They made sure that Mike Brown wouldn’t be a story that sat in the back of this country’s minds, but at the forefront, even to this very day.

Colón reminds us of women in the movement like Mama Sage, the caretaker of the organizers who visited Ferguson in the aftermath of Mike Brown’s murder, who opened her home to help create safe spaces for the various large protests that went on and who was the bearer of honest grown-folks wisdom. Colón highlights partnerships that form and families that are built in the midst of chaos within the work, reminding us that life wins. She also exposes what it’s like to not have the time to care about the revolution when you’re just trying to live. The Last Soldiers, the name that the main characters give their newfound, collectively-made family, shows the audience exactly who is there to take a final stand when a system that was not built for us proves to us to be exactly that. Tackling issues of toxic masculinity, homophobia and highlighting the diversity within activist engagement, the power of the community came together within the play and brought to the forefront the importance of storytelling and performance as strategies of coalition building.

Honoring the various roles we all hold in our daily lives, while also showing the spaces of love we share with one another while fighting for change, florissant & canfield is a must see! It is an inspirational piece that captures the times we are living in and leaves one thinking back to where they were that summer of 2014. It leaves us to think about what Mike Brown and many others like him mean to our lives. That could have been one of us so easily, could it have not?

Colón ends the play questioning what fear means and what love means in each of the Last Soldier’s hearts after experiencing Ferguson. I ask you what that means to you and leave you to think on how love and fear can escalate or deescalate a situation. florrisant & canfiled serves as a reminder of how fear can elevate a situation into a state of violence, while love allows the compassion of stopping and thinking. What would Ferguson have looked like if the criminal justice system didn’t fear Black people or if the system was detached from the strings of pain from the past and love was offered instead? Ha. Mike Brown would be alive at the least.

florissant & canfield is directed by Jeff Award winner and UIC theatre faculty member Derrick Sanders and written by playwright Kristiana Rae Colón, who is a poet, playwright, actor, educator, Cave Canem Fellow and co-director of the #LetUsBreathe Collective. The play is showing at UIC Theatre April 20th and 21st. Learn more about the play and purchase tickets here. Miranda Goosby is a 23 year old creative from the DMV. She believes in authenticity and expressing one’s truth because you can’t allow someone else to tell your story. In the words of one of her favorite writers Audre Lorde, “your silence will not save you.” After reading that, she was inspired to write about pieces that express the times we live in and the hard truths that set us free. Miranda is involved with community organizing and also enjoys creating moments through dinner gatherings and think tanks amongst other writers like herself. She feels that her writing allows one to tap into her mind and the minds of other young like minded black people. Miranda believes in the community coming together creating change through using their collective voice. Miranda is also a Writer-in-Residence at The Breathing Room as part of Sixty’s Envisioning Justice Residency. She hopes to bring a warm energy, an open mind and a strong work ethic.