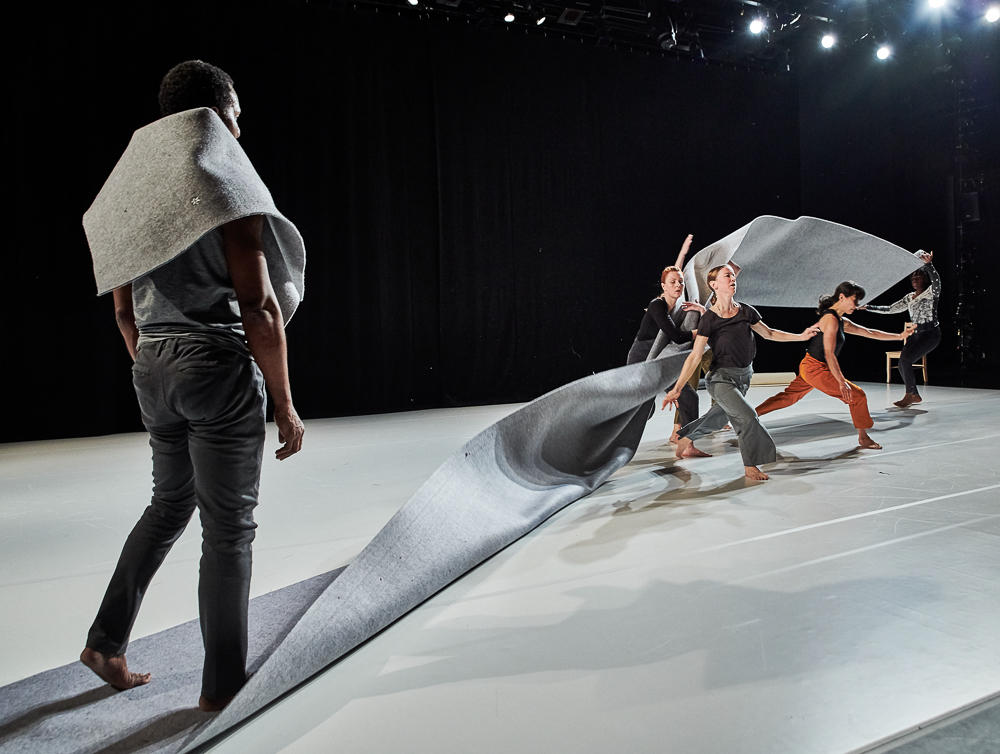 In a Rhythm begins with storytelling, a storytelling which gradually darkens into theater: Bebe Miller steps out onto the stage with her dancers, and begins a short narrative about hearing an audiobook of a David Foster Wallace story. As she continues talking, the lights dim and the bodies around her begin to move – a pleasing, calm split to the viewer’s attention. After all, the David Foster Wallace story, as Miller informs us, “is not a part of this dance.” Soon a single piano note chimes in, and the narrative is subsumed by the familiar structures of concert dance. But they are not so familiar here.

Miller is explicitly interested in the choreographic potentials of syntax: in her words, “how we collide with meaning through the juxtaposed dynamics of action and context, in time and space.” Her work, however, doesn’t merely follow through with this curiosity – it explodes it with a rare breed of infectious joy and sharpness. In this world, the casual release-based grace of postmodern movement is immediately followed by jagged, awkward weight sharing; a reverent silence is punctured by snippets of funk music. The dancers unroll a felt runway with various parts of their body, then shuffle on the fabric to trouble its path. Other pieces of felt are thrown on as costume pieces and then discarded. They form dance circles, stand in contraposto chorus lines, run victory laps, and shove laptops into each other’s faces. They are all ravishing movers, including Miller herself, who joins in on the dancing towards the end of the piece. Dancers Trebian Pollard, Christal Brown, and Michelle Boule performing in Bebe Miller’s “In a Rhythm.” Pollard dances on one of two wooden chairs. Brown dances on the floor in front of him as Boule looks on, holding a large bolt of felt cloth. Photo by Robert Altman.

Within the troupe there is a constant, visually arresting parthenogenesis between brief solos and clusters of smaller groups; sometimes these pairings are explicitly organized by race. Modern dance, after all, has its own absurd hierarchies in place, however much the form might extol its own relative lack of strictures upon the terms of a dancer’s embodiment. In a Rhythm riffs upon these hierarchies with sly brilliance. Part of the genius of Miller’s vision lies in her ability to pick apart even the greatest subtleties of any gesture’s cultural baggage, and even the most cerebral arrangements feel permeated with emotion. Everyone changes costume at least twice during the piece. As the dance continues, the colors seem to get brighter.

Color, writ large, is at least as crucial as syntax in this piece.  At one point in her spoken interludes, Miller brings up the controversy over Dana Schutz’s painting Open Casket, elucidating that for her, Emmett Till’s image is one she can recall any time she wishes, one for which she remembers in great detail the conditions in which it was seen: her aunt’s living room with its “plastic slip-covers” and “snake plant in the corner.” In a maxim that seems to offer a solution for ethical art-making – within the boundaries of one’s own experience, yet in a crucial and necessary slippage with the experiences with others – Miller goes on to remind the audience that, “Everything is here. Everything is available … What’s left is choice.”

The choice to salvage choreographic material from one’s own memory and terms of existence, the choice to stand back while others dance, or the various barely-conscious choices of spoken grammar – all of these are fed into In a Rhythm’s glorious constellation, and the viewer is happily swept along with them, until Miller steps out one last time to declare, matter-of-factly, “I think I’m going to stop this now.” The dancers file out again, and in the wake of Miller’s power we are left to consider choreography anew: a site of both steadfast intellectual rigor and fluid pleasure, of both beauty and political consequence. How lucky we are to exist in the same moment as such dances.

Featured Image: Dancers Angie Hauser, Bronwen MacArthur, and Michelle Boule run under a long bolt of felt, flung into the air by Christal Brown. Trebien Pollard observes them in the foreground, holding down the other end of the felt with his feet and wearing a piece of the same cloth around his shoulders. Photo by Robert Altman.