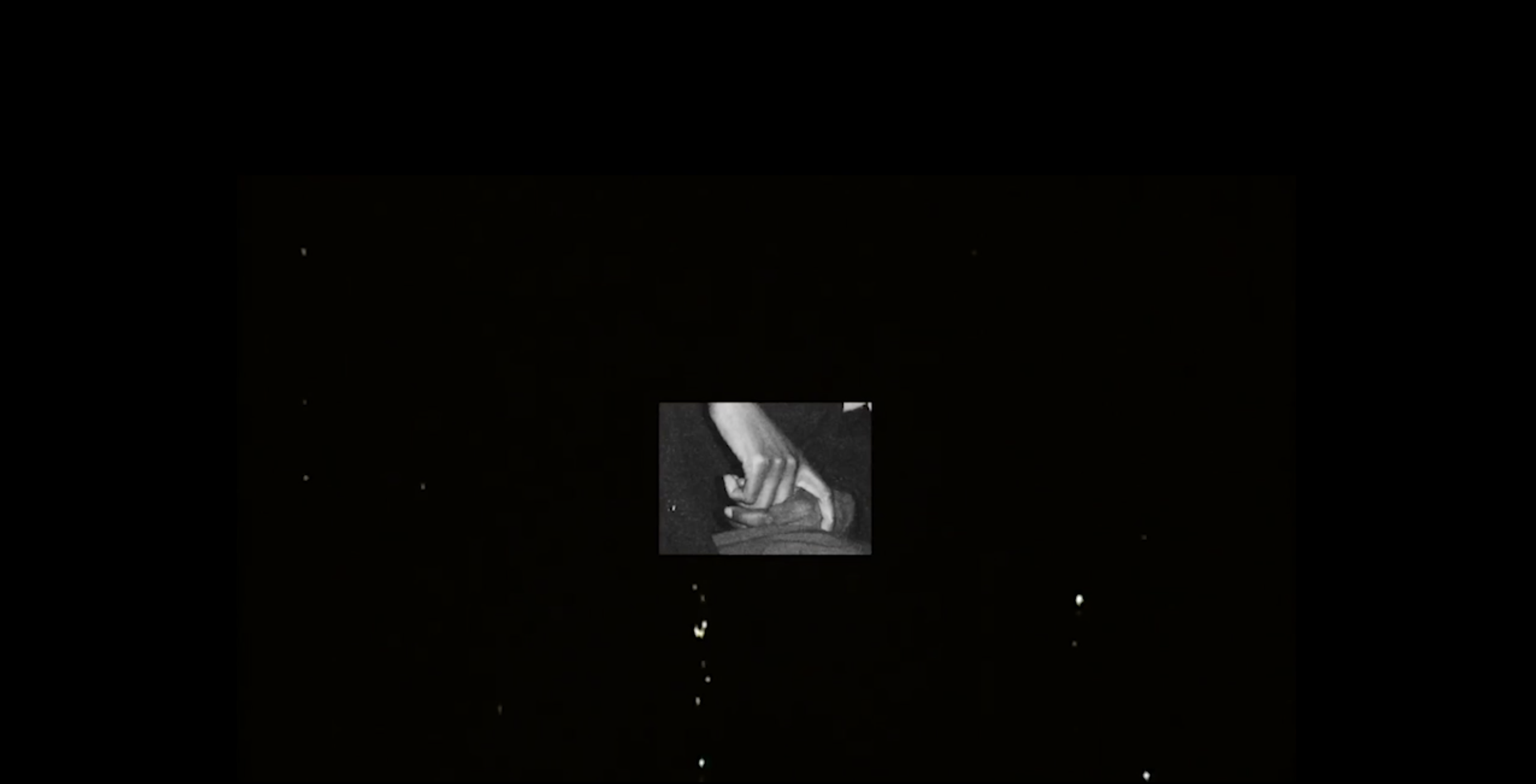 Featured image: Film still from Going Back to the Future, a visual collage by Ireashia M. Bennett as a response to ‘to render the infinite,’ a short film by zakkiyyah najeebah dumas o’neal and composer by Ayana Contreras. A small black and white image of two hands embraced is placed near the center of this film still and surrounded by all black.

This essay is a response to the event “Imagining Chicago’s Future: A Film Screening & Conversation” presented by the Chicago Humanities Festival that took place virtually on November 6, 2021. In collaboration with the Chicago Film Archives, visual artist zakkiyyah najeebah dumas o’neal and composer Ayana Contreras presented “to render the infinite”, a new film meditating on what’s to come for Chicago.

This essay was written in conjunction with the video collage Going Back to the Future by Ireashia M. Bennet. Visit this link to watch the video.

Part I: In My Mother’s House There Is Still God
For Ruth

She saw the gentle way her mother pressed her hand to her own chest and thought, “In my mother’s house there is still God.” Her mother, unaware she is being watched, smiles and pets the fuzz of her grey and coral pink striped sweater. Pink like the briefest glimpse of her inner lip. Pink like the inside of a black cherry. Pink like that last Autumn sunset. Perhaps she knows she’s being watched and is delighted to finally be seen for once. To demonstrate the demure softness with which she handles herself and thereby to say, Worship yourself with the same kindness.

She saw her mother’s hand and thought, “In my mother’s house there is still God.” In her mother’s house, there are decent home-cooked meals. Cold beer in the refrigerator. New curtains to decorate the kitchen. Sweet potato pie. Midnight coffee, her Goodnight Coffee. An apron tied around a housecoat. Teacakes and rocking in rocking chairs, telling stories of the past. A radio playing saxophonic blues in the background. Hot milk to quell a stomach full of liquor. Enough squandered rent to pay for four houses. Her loving admonishment, “Now don’t you start, child. It’s too early in the morning to be talking about money. It ain’t Christian.” Insecticide sprayed into the cracks in the walls. A copy of George W. Lee’s ‘River George.’” A plant on the windowsill that dreams of being a garden where the children can play. A single window through which fleeting daylight enters. Furniture that has been polished, washed, sat on, used, scrubbed too often. A brand new set of gardening tools so she doesn’t have to use her knives and forks. Her mother’s request for her to sing “No Ways Tired.” I don’t believe (I don’t believe) / That God would bring me (would bring me this far just to leave me). In her mother’s house, there are the children she strapped to her back before scrubbing all the floors in America and washing all the sheets in America to make this home possible.

She watches her mother’s delicate hand, considers her coy smile, wonders wherein her private world that sentimental expression finds its roots. She looks at her own hand, marveling at their similarity, and thinks, “In my mother’s house there is still God and, sometimes, She works in mysterious ways… but She works, doesn’t She?”

Part II: When a Cat Takes Off with Your Money, He Doesn’t Leave You a Roadmap
For Walter

MAMA: When a man goes outside his home to look for peace…

How much is an ordinary man from the South Side of Chicago’s life worth? The answer should be simple. You cannot put a price on life, it is invaluable, immeasurable, incalculable. But his father is delivered to him in an envelope as a written sum of numbers. He counts twice to make sure the number of zeros is correct. $10,000 for a lifetime of toil, years of him coming in night after night, looking at the rug, looking at his wife, the red showing in his eyes, the veins moving in his head, growing thin and old before he was forty, working and working like somebody’s old horse, killing himself. His life is evaluated and assigned a value by a faceless insurance company. His father’s flesh becomes money. Money that belongs to his mother, but he envies this money, dreaming of its possibilities, the ways that it could reshape their lives. Dreams that depend on the death of a man. What will his mother do with the money? Pay for a downpayment on a house so that they can finally escape their rat trap of an apartment, to finally have the garden she’s always dreamed of where her grandson can play. Pay for his sister to go through medical school so she can fix up the sick, make them whole again, like God. Or, as he dreams, use the money to invest in a business, a liquor store he plans to open with men from the neighborhood, invest it like the white boys sitting at quiet, cool-looking restaurants, turning deals worth millions of dollars. People will always drink liquor. Liquor makes life bearable. Liquor makes a life defined by its condition of oppression—so much so that any sense of self outside that circumstance can’t be found—bearable. He is always tied up in a knot about something, so he goes to the Green Hat to listen to this little cat there who plays the sax, who isn’t more than five feet tall and talks to him only about music, and another guy who plays the piano. He drinks and listens to them play and realizes that nothing matters except just being there.

His mother watches him fumble with the grill, placing a hand on her hip, running her hand through her hair, and taking a drag from her cigarette. She watches but doesn’t offer advice, convinced he’ll think her suggestions are intended to belittle him and grow irritated. She’s wearing tangerine orange from head to toe because it’s the closest she can get to wearing summertime itself. They’re in the backyard she’s always dreamed of. She feels a warmth start in her throat and slowly pool in her chest while she watches him work. It might just be the liquor, but she thinks to herself, I don’t have anything, I don’t own anything, I don’t want anything that isn’t for him. There isn’t anything worth holding on to, money, dreams, etcetera if it means it’s going to destroy my boy. The smell of smoldering charcoal and sizzling meat fills the air. She watches him slowly chewing his hot dog and leans back, crossing her leg over her knee. This dream. Their safeguarded pride. It finally belongs to all of them.

Part III: Goodbye Misery… I Don’t Want to Ever See Your Ugly Face Again!
For Beneatha

The future can resemble a dream the way someone might mistake a lake for an ocean. She only realizes the difference after she wades out far enough that the waves are lapping at her neck and she accidentally swallows a mouthful of lake water. She exclaims, “It’s not salty at all.” She is delighted. This means she can open her eyes underwater without the stinging sensation, so she spends the afternoon bobbing in and out of the water, gathering shells and smooth stones from the dull sand and collecting them in a small heap on the shore. She lingers, trying to decide what to do with her small hoard of treasures. The sun hovers above the horizon like a friend who, not wanting to leave yet, has launched into another long-winded story despite saying goodbye half a dozen times. She gazes at the multicolored, rippling surface of the water—a mirage of pink, gold, green, and blue—and wonders, Is this a dream or the future?

Too many things—too many things have happened today. She must sit down and think. She doesn’t know what she feels about anything right this minute. She feels like a prune, dehydrated and wrinkled by the relentless sun. While she slept in her bed, people went out and took the future out of her hands. Nobody asked. Nobody consulted. They went out and changed her life. Her dreams scattered like roaches fleeing into cracks in the wall after the kitchen light is turned on.

She was looking for her identity. She was experimenting with different forms of expression. She would like to be utterly, utterly in love, to work and finish something. She was going to contribute to the movement by instituting discipline in her life. Although she loved beautiful things, she would deny herself luxury. She would only own five dresses and would never wear makeup, except lipstick. But of course, she doesn’t produce a goddamned thing anyway—she is too full of dreams. She closes the shutters so that no one can see. Her. Alone. Sitting at her typewriter on Easter evening; drinking scotch and brooding. She would give her soul to be with someone whom she really longed to please. That would be heaven. One of her suitors, a young man who is very quiet in his anger, listens to her agony and confronts her:

—You talk about what good is struggle, what good is anything? Where are we all going and why are we bothering!

—AND YOU CANNOT ANSWER IT! (Unlike him, she has never been quiet in her anger.)

—I LIVE THE ANSWER!

She wants to say something bad to him, but instead she tells him that he’s a sweet boy and full of dreams and that everything is peachy keen. She knows that all the tyranny in the world will never put a God in the heavens. She knows that there is still God in her mother’s house. In her mother’s house, her future becomes a question: When is the time to love somebody the most? When they’ve done good and made everything easy for everyone? No. It’s when a man is at his lowest and can’t believe in himself because the world has whipped him until his life is defined by a condition of oppression. In her mother’s house, there is always something left to love.

And where are we all going and why are we bothering? She lives her answer.

Portions of this text are adapted from Lorraine Hansberry’s groundbreaking play A Raisin in the Sun, African-American scholar Imani Perry’s biography Looking for Lorraine: The Radiant and Radical Life of Lorraine Hansberry, and Hansberry’s 1959 interview with famed radio broadcaster Studs Terkel. All of these sources are credited below:

Riley James Yaxley (they/them) is a writer, poet, and fundraiser based in Chicago, Illinois, living on unceded land of the Kickapoo, Peoria, Potawatomi, Miami, and Očhéthi Šakówiŋ peoples. They hold a bachelor’s and master’s degree in Writing, Rhetoric, and Discourse from DePaul University, specializing in professional writing and queer and feminist rhetorical histories. Riley started their career working at a number of arts organizations in Chicago, including Chicago Gallery News, the Museum of Contemporary Art Chicago, Wrightwood 659, Intuit: The Center for Intuitive and Outsider Art, and the Art Institute of Chicago. Riley is a regular contributor to Chicago Gallery News and ADF Web Magazine, aiming to uplift BIPOC and LGBTQIA+ artists and challenge systems of inequity within the art world through their writing.