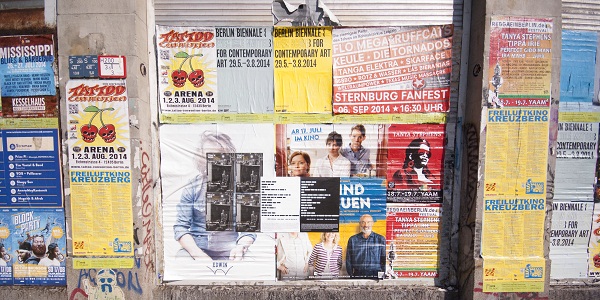 During his recent residency at Or Gallery Berlin, Chicago-based artist Troy Briggs completed a new piece titled shutter shudder ep. 1, constructed from a retrofitted light bulb wirelessly connected to this website: http://dotdash.x1024.net/ When a user types a message into a text field online, that message is transmitted to the bulb in Berlin, where it flickers in Morse code. This text flashes only once and is not archived in any way. The bulb’s exact location isn’t disclosed, but it has been installed in a space accessible to the Berlin public: a flickering lamp in an alley, or maybe a pulsing light in a disco. I spoke with Troy about the transitory nature of his work, especially in regards to the way shutter shudder ep. 1 engages with the Internet. In an age when we know that every facet of our digital lives is susceptible to government surveillance and is constantly being mined by companies for marketing insights, Briggs’ project creates a safe place for secrets, incorporating them into an artwork that is whimsically beautiful and entirely fleeting.

The poster Or Gallery printed about Briggs’ project. Image courtesy of the artist.

Chase Martin: Ok, first things first. I’m curious about the basic nuts and bolts of how this piece functions. I know participants type something into a text field on a website and then it flickers inside a light bulb, but how does it actually work? Did you work out all the technical details on your own? Did you have help?
Troy Briggs: I had a lot of help from a guy named John Dugan, who’s great. I had this project on the backburner for a little while because I didn’t want to be muddling through code, which isn’t really my strong suit. But, I met him [Dugan] randomly at a bar, just chatting, and it turns out he’s a network engineer. He was really enthusiastic about the project and was just like, ‘Oh yeah, I can help you with that.’  Something that probably would have taken me a couple years to work out only took like a month. I describe the piece as a light bulb, but the mechanical work really went into the thing the light bulb is plugged into. It’s basically a solid-state relay that works like a light switch. On off, on off. We have an Arduino type microcontroller hooked up in there, and that’s what’s telling it to turn on and off. That microcontroller has a little wifi chip, and that’s it.
CM: So, the wifi chip connects the piece to the website?
TB: Yep.
CM: Was using Morse code part of the plan for this project from the get-go? Or, was Morse code something that just worked out given the mechanical structure of the piece?
TB: Well, my interest in using Morse code actually started with an earlier project that I haven’t finished yet. That started when I was out on the street somewhere, and there was a stop sign that was kind of wobbling in the wind and making tapping noises that sounded a lot like Morse code to me. And that’s what got me thinking, well what would that say if you translated it? I made a machine that translated the wind’s movement into Morse code that I translated into text.

The posters plastered on a Berlin street in July 2014. Image courtesy of the artist.

CM: Are you interested in codes, just generally? Isn’t a website also a series of codes?
TB: I think there’s something really compelling about veiling something. It’s like a secret that’s still out in the open. There’s something a little metaphysical about it to me, like a language that’s happening under the surface. With a lot of my work, especially with this piece, the idea of coding isn’t so much about obfuscating information, but trying to highlight it by making it quieter.
CM: Well, it’s also such an ephemeral piece. Those little bursts of coded information flicker out and then they’re gone forever. Does that play into the ideas you were just talking about? Is its fleeting nature a facet of the same notion of veiling something?
TB: Yeah, for sure. I like thinking about the moment of typing a message on the website as a moment of deciding, well, what do I say? Here you are with this little tool to say something to potentially the world or potentially…the void. It was a big question for a while whether or not to put some kind of webcam on the light bulb so that people on the website could see their message flicker. But, I eventually decided against it, because I think that would simplify it too much. There’s something nice about having to just trust that it’s happening, without immediate gratification. I think there’s also a tendency now — both in and out of the art world — to collect and record everything, maybe with the intention of using it for a future project or something. But with this piece, pretty early on it became important not to do that. We were thinking that it needed to be a safe space where people could be contemplative with it, or just do whatever they wanted. They could talk dirty, write poems, whatever. The result is the same.
CM: I think it’s interesting that part of this very ephemeral project involves funneling information through a medium like the Internet. We’re all so used to having every aspect of our online lives being recorded in some way by companies or governments. This project happened in Berlin right around the time the German government was really angry with the US for spying on its citizens. Did that political situation ever factor into conversations about the work?  What gets recorded forever online and what can just vanish?
TB: Surprisingly not. I don’t know if it was something happening under the surface, or something people might not have wanted to talk about much.
CM: The piece is installed somewhere in Berlin, but nobody besides you knows where?

A promotional image Or Gallery created for the project. Image courtesy of the artist.

TB: Just one other person. They keep me updated and make sure the bulb is still doing its thing. We made about 400 posters that are plastered up all over the city that say, you know, here’s the website to go to if you want to access the piece, and it’s not in a gallery.  It could be a light bulb anywhere. That potential audience is everybody, not just the art world crowd. I like the idea of a 60-year-old Turkish guy reading a poster and wandering around looking at the infrastructure of the city just a little bit differently, possibly a little bit warmer or…mysterious is the wrong word, but just knowing that somewhere there’s this little pulsing thing.
CM: One of these light bulbs has a personality.
TB: Exactly. Realistically, the chances of someone finding the bulb and knowing Morse code well enough to read it is pretty low. But, I mean, it’s possible. There are enough old Navy folks out there. I’m planning to do this project somewhere else after this one, and again after that. So, somewhere along the line I’m imagining someone will notice it. Even if they don’t see the posters and they just discover it on their own and have this moment of what the hell? Am I losing my mind?
CM: How long will this bulb work? How long do we have to send it messages?
TB: Six months. After that, we’re going to just disconnect it from our side. Then, because its resting state is on, it should become a normal light again.

Chase Martin is a Development Associate at Threewalls, a nonprofit organization in Chicago dedicated to contemporary art practice and discourse. He is the former director of Institute 193, a non-profit arts center in Lexington, Kentucky that collaborates with  artists, musicians, and writers to produce exhibitions, publications, and projects that document the cultural landscape of the modern South. His arts writing has appeared in Oxford American Magazine, AEQAI, and Burnaway, among others.