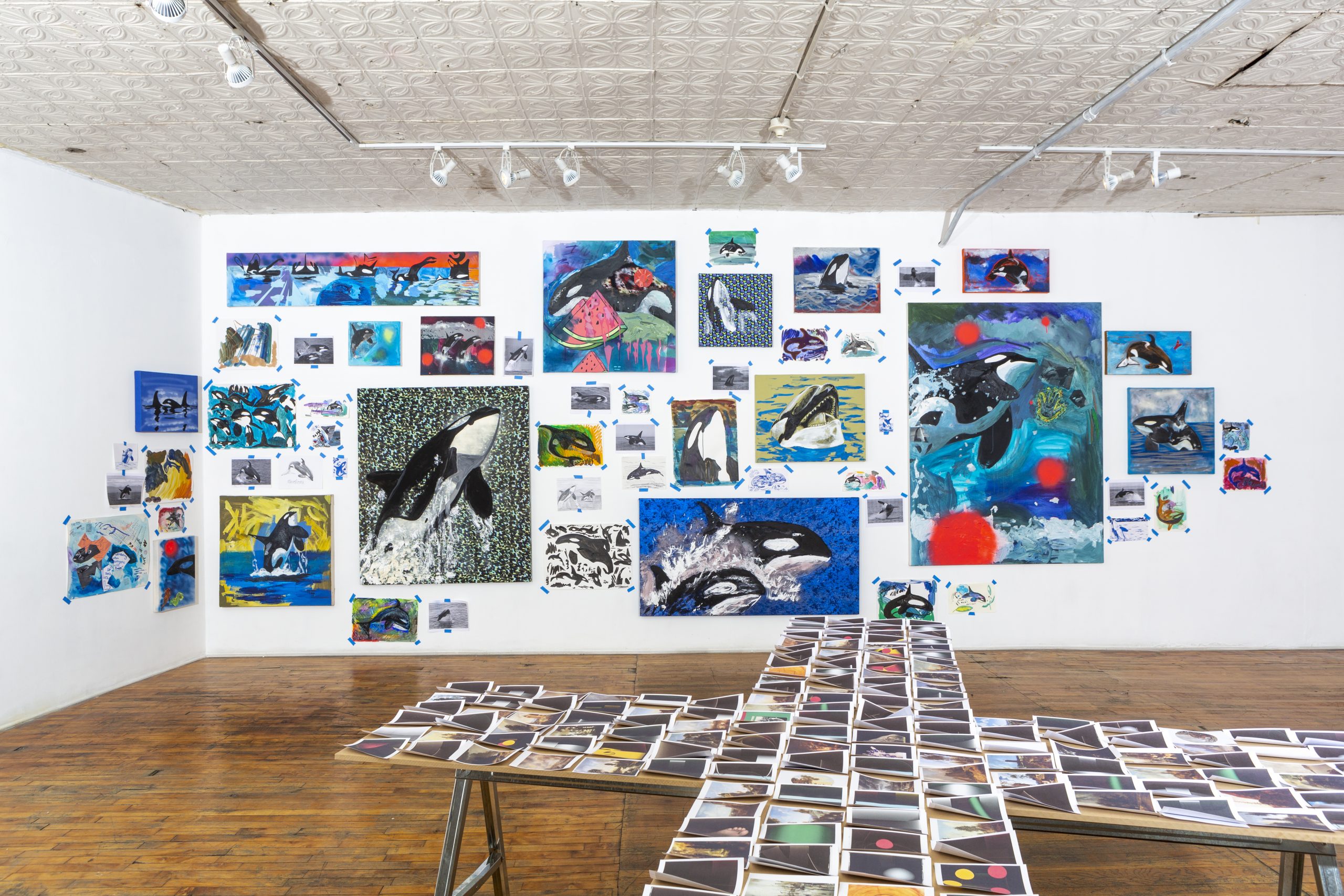 “An image is an image, and sincerity is in the shuffle”

Erin Hayden and Max Guy’s exhibition Cups Swords and Eyes may be at Heaven Gallery, but its concerns are altogether earthly. The techniques are playful and quick, the style ranging and unpretentious, the materials scrappy, the ideas “elementary”—to quote the artist—creating a show that is quite sincere. Here there is no desire to transcend into the heavenly realm, but rather an insistence on sitting in all of one’s detritus and obsession. There is real comfort in the simplicity of the show’s ideas and in its commitment to making process visible. Hayden and Guy couldn’t have found a better home than with Heaven Gallery’s warm and casual atmosphere filled with gently pulsing dance music, champagne light, and a gorgeous selection of vintage clothing. The rarified environment of art is blissfully far from mind, and visitors are welcome to meet the art on its own terms.

Dominating the main room at Heaven Gallery is a massive salon hang of orca images put together by Erin Hayden. Some are paintings, some are quick drawings in pen and ink, some are done up in oil pastel and watercolor. The works on paper and the printed images are tacked onto the wall with blue painter’s tape, and the paintings are more classically hung. The paintings have elements of assemblage with printed fabric and cutout inkjet images—of orcas, of course—using thick globs of white paint breaking the surface of the canvas to represent water spraying out around the whales.

Layered into the works on paper are sprays of text that all seem to express some kind of longing to connect and heal: “flaws,” “where we first met,” “hope to see you soon,” “wondering when everyone will know.” These phrases create a vulnerable and personal relationship between artist and viewer. The focus here is not so much on the art but on the artist’s relationship to its making. By extension, looking at the work also becomes about the viewer’s relationship with the artist. One can only ask, What was the artist trying to learn? How might an orca serve as a symbol for human connection? And how might I be connected to this person through their art? In conversation with the receptionist I was told that Hayden had a dream wherein an orca told her to “dive deeper,” and it is clear that she took that to heart.

Guy’s work as a printmaker occupies the rest of the space, with a selection of digital collage on one wall, a photo collage of a watch face on the other, and a perpendicular table covered in 3×5 printouts of found images. The digital collages present a distorted relationship to the body, mediated by a barrage of marketing. There are fitness models and vitamin supplements, disembodied hands and guinea pigs, anime demons and kawaii kittens, dead fish, and money. Much like in Hayden’s paintings, there is a dense and open approach to composition and an underlying sense of longing. As a viewer, it’s almost painful to be a part of as we witness this maelstrom of early internet imagery distorting our relationship to image—which, I suppose, is really the point.

The table in the center of the room has a very “You are here” vibe as it presents printouts of early American transcendentalist painting, rods and cones suspended in black space, and cross-sections of tree rings with a circle and a rectangle placed on top. The table seems to say “X marks the spot” in time and space and we, the viewers, are standing right next to it.

Guy’s photo collage of the watch face breaks the image into small printed squares, made glossy with what looks like mod podge, laying them out in an ornamental design. The watch hands are in slightly different positions in different images, compressing several moments in time on a single visual plane. In some of the squares, the watch hand has been digitally manipulated to break the hand represented by rainbow squares of diffracted light. This desire to break one’s relationship with codified time and find a new relationship may not be revelatory, but just because it’s an idea that many people have explored doesn’t detract from the significance of the idea to any individual. In looking at this piece we can feel the artist actively working through an idea in a way that is familiar in how utterly fundamental to human existence it is.

This, then, is where I find the connection to tarot which the title suggests. One of the frameworks often used in tarot is the idea that the Major Arcana tells the story of the soul moving through the heavenly and earthly realms. We begin as the raw, foolish stuff of nature, enter the earthly realm, then must move through a series of stages of development in order to gain wisdom and be reunified with the world. The arc of the Major Arcana is the same for everyone, and in order to achieve wisdom, each stage must be moved through. No one gets to go over or under or around a card because we think we already have it all down pat, and it is important that we honor wherever one is in this process.

In the context of this show then, we have the freedom—and even the invitation—to reconsider what it means to be a person in the world. We have the opportunity to see the artists thinking of what it means to live in a society that controls time, manipulates the body, and makes the most glorious feature of our existence—community—almost impossible. There is an aspect of divination that one can take in approaching this show as we watch the artists shuffling through the world. One can ask, Where am I in all this? How do I relate to what I’m seeing? We live in a deeply alienating society, and we would be remiss to ignore the sincerity of someone saying that they feel alone or that they are having a difficult time with time.

Erin Hayden and Max Guy’s show Cups Swords and Eyes will be on view at Heaven Gallery from December 11 – January 24.

Featured Image: Installation view, 2020. In the background are Erin Hayden’s salon works of mixed-media orca paintings, sketches, and printed images. In the foreground is a cross-shaped table laid out with 3×5 printed images assembled by Max Guy. Photo courtesy of Heaven Gallery, shot by Guanyu Xu.

Reed Everette is a painter and a poet currently living in Chicago, IL.