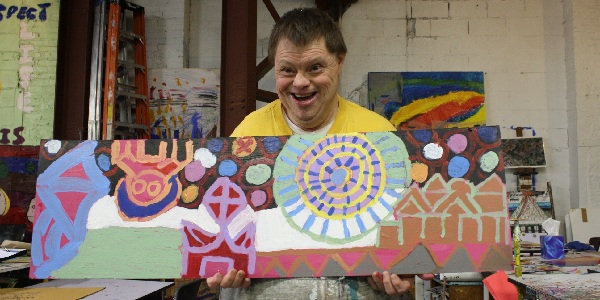 Dave Krueger looks over his recent piece, a work based on the Twilight Zone, pausing to focus on the colors. “I added color to it because the show is in black and white,” he said, pointing out the jagged colors framing the picture. Indeed, it’s an explosion of color transposed on a subject matter that is a consistent well of inspiration for Dave. “I get ideas from watching TV and from newspapers, and from my own imagination.” He carefully lays the piece back on the work table and points to a few others on an easel nearby. “The best part is working with lots of artists,” he says, gesturing to his other works. “I like to do collaborations.”

An energetic talker, Dave is only 10 minutes into his whirlwind tour of The Arts of Life studio, and I’ve already met the entire staff, two dogs, seen the gallery, found the bathrooms and met several artists. In his official duties as tour guide, he is a kinetic force. You are only a rider on his all-stop trip throughout the studio. He is covered in paint, from his shirt and sweatpants to his forearms, and enthusiastically he shows off the artists and their work. In the cavernous space where about a dozen artists are diligently producing works in marker, pen or thick oils, Dave introduces each artist and his or her specialty.

Bill Lilly, another artist, is eager to talk about his latest work: a hand-drawn Def Leppard logo.He has a penchant for working on rock ’n’ roll themed work, and the Def Leppard logo is in its initial stages with the carefully outlined triangle and words done in black ink on top of white paper. “I like to do logos of rock bands,” Bill tells me. He’s been at The Arts of Life for five years, and even though he likes to draw, he is more passionate about being the lead singer of The Arts of Life band. (I saw The Arts of Life band at the studio’s annual chili cook-off, and it’s something akin to late ‘70s screaming-loud garage rock).

Located along an industrial corridor near Grand and Damen avenues where forklifts and delivery trucks are a common sight, The Arts of Life studio provides a space for artists to create colorful works in all types of media: painting, ceramics, screen printing, and pottery. The mission of The Arts of Life is to provide people with developmental and intellectual disabilities a place to create art. But to think of it as simply art therapy or a safe place is to miss what The Arts of Life really is: a great artist community making unique and engaging art.

The studio is only open until 2 p.m. each day, so Dave has little time to act as tour guide. He shows me to the back of the studio and to a stacked pile of his work. The nearly two dozen works are colorful, rhythmic works with extensive geometric patterns. Most of the works have dark foundations overlaid with first layers, mostly black. They are taut with energy. The work is fundamentally about feeling, about enjoying the subject.  “It comes from my heart,” Dave says of his work. “When I get happy, sad, or frustrated, I get it out. I’m very proud of my work. It gives me a lift. I can come up with my own ideas.”

It takes Dave about 20 to 40 days to do a painting, though some he does in about two weeks. Most of his work is in paint, but he has also worked in ceramics and screen printing. Much of Dave’s drive to become an artist comes from his brother Gary, who taught Dave everything he knows. Dave wants to follow in Gary’s footsteps, and he’s not afraid to get his hands dirty. “I’m a regular artist. I like it here because I can paint what I want. If I didn’t do my job, I wouldn’t be here.”

Dave started at the studio in 2007, and like Bill, he’s also in the Arts of Life band. However, in keeping with the studio’s philosophy, he’s involved in many aspects of the studio’s operation, including being on the PR committee and serving as the de facto tour guide. Being part of The Arts of Life is more than just creating art—it’s actively contributing to the studio’s community.

Even though The Arts of Life is a typical artists’ studio in many regards, its mission is to create an artistic culture for people with and without disabilities so they can realize their full potential. The studio is owned by the artists, and the artists have meetings and the right to hire and fire people. This is not art therapy, but what The Arts of Life does is therapeutic.

Emily Smith, Development Manager for The Arts of Life, started as a volunteer five years ago making performance work with the artists. She taught performances where the artists used their daily rituals—brushing their teeth or combing their hair—and incorporated those rituals into dance. Today she works more broadly with the artists.

“We’re put into the field of outsider art,” she says. “We’ve been at the JFK Center in D.C., and part of the Everything Museum in London. We want people to like it for what it is.”

Smith says that many of the 27 artists at The Arts of Life are in group homes where their lives are tightly controlled: when to get up, when to eat, when to go to bed. The Arts of Life provides the flexibility and control absent in other parts of the artists’ lives. In a world with so much control, the openness and creative atmosphere is a boon to these artists.

The Arts of Life is an open studio where everyone has their own workspace. “They own the space they work in,” Smith says. “They can collaborate with each other or work individually. Everyone has different interests and skills. Their work is their choice.” The Arts of Life doesn’t follow the format of a school. It’s an open studio that incorporates art discussions and demonstrations. The artists have worked on a huge variety of formats, including photography, performance, painting, drawing, screen printing, sculpture, puppet making, murals, and costume making.

The idea for The Arts of Life struck Denise Fisher when she was working with New Yorkers with disabilities in a traditional workshop, doing piecework such as putting a head on a doll or other rote task. One of the people Denise worked with—Veronica “Ronnie” Cuculich—hated the traditional workshop and didn’t have a place for artistic expression. Denise worked to provide Ronnie with an artistic outlet to express herself, and she became less agitated from her daily piecework. Denise and Ronnie recruited more artists and found the artistic outlet had the same impact: less anxiety and more individual creation. In 2000, The Arts of Life was created as an artists’ community for people with disabilities looking for a creative outlet.

“We’ve had people who were violent and non-verbal and now who are writing poetry,” Smith says. “They are being appreciated for the work they make. There’s no mistakes in art, and it gives them confidence.”

Ronnie’s works hang in the gallery and showcase her trademark style of a circular rainbow of colors swirling around a center image. In the gallery, the works run the gamut from frenetic bursts of color and motion to more traditional representations of wildlife or people.

For now, The Arts of Life is looking to expand its presence through more marketing and publishing. It’s a barebones studio with a minimal staff at each studio, but the artists’ works are starting to gain people’s attention. Through several summer events and the creation of an associate board to focus on getting the studio’s name out, The Arts of Life is heightening the exposure of its artists. “It’s a challenge supporting people with different needs,” Smith says. “But we’re now pushing out the work, getting out, and being seen.”

The Arts of Life runs Monday through Friday, 9 a.m. to 2 p.m. View their website at artsoflife.org, or visit the space in person at 2010 W Carroll Avenue.

Jason Kreke is a Chicago-based freelance writer, covering arts, music, education and politics for print and new media. His writing has appeared in several publications in and around Chicago, and he has a degree in journalism from Purdue University.