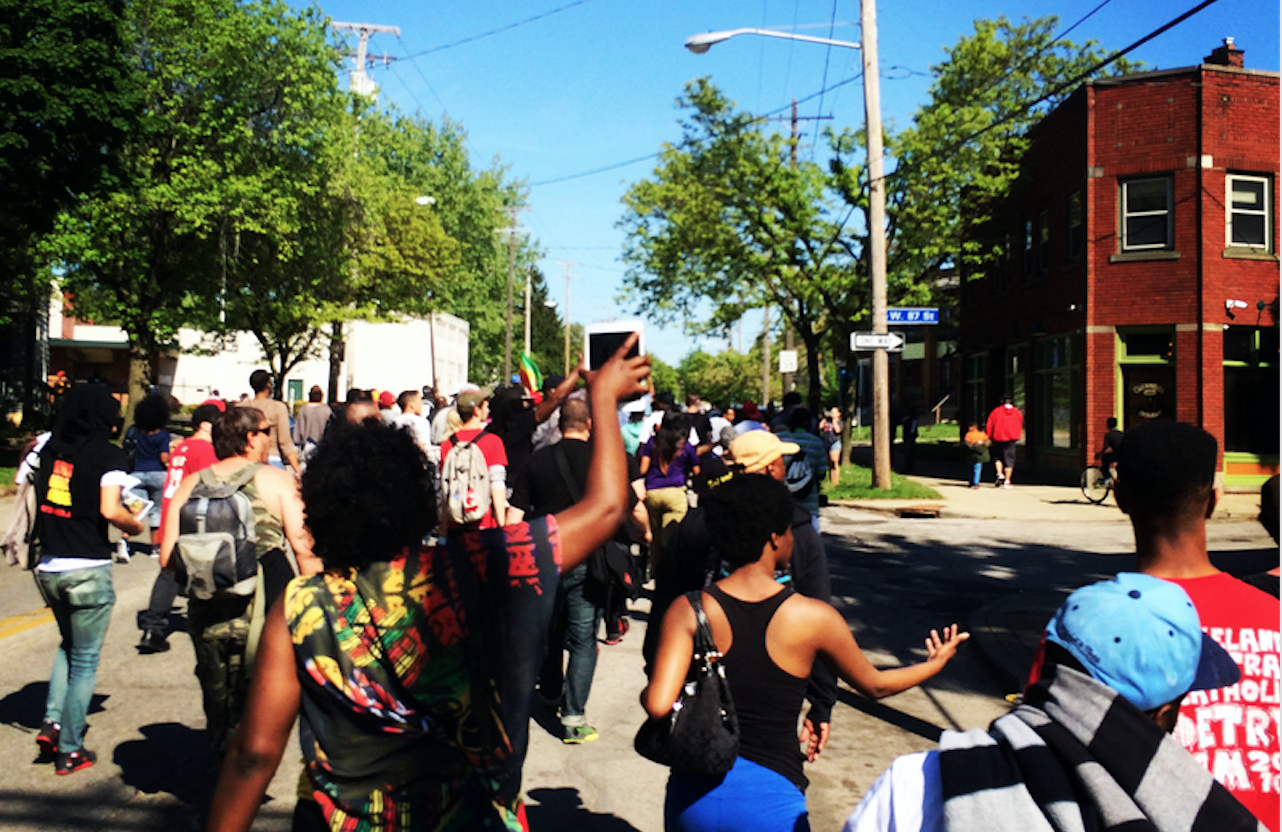 Jarrett Drake has worked as the Digital Archivist for Princeton University’s Seeley G. Mudd Manuscript Library in New Jersey since 2013. Prior to working at Princeton, he served as a Library Associate at the Special Collection Library of University of Michigan. He also had brief stints at the Maryland State Archives and Beinecke Rare Book and Manuscript Library.

Aside from being a leader in the field of digital archives, Jarrett is the leading force behind the hashtag #archivesforblacklives and A People’s Archive of Police Violence in Cleveland. We recently sat down with him to discuss his thoughts on archives needing to emerge as sites for trauma, transcendence and transformation, the role of technology having in archiving communities, how hashtags can increase people’s interest in documenting their stories, raising awareness among institutions and their shortcomings when archiving marginalized histories.

Mr. Drake also gave Sixty Inches from Center’s Analú López his ideas on what sustainability would look like in the 21st century archive as positions for librarians, archivists, and catalogue caretakers may begin to disappear. He also elaborates on the proactive roles individuals, non-archivists can take when archiving marginalized histories such as #BlackLivesMatter or #ArchivesForBlackLives movements. We also learned what obstacles he feels Archivists of color face in the field.

Analú López: You say new archives must “emerge as sites for trauma, transcendence, and transformation”. Is there a way that existing Black archives could expand themselves to include these narratives? Or are you suggesting that they need to be newly established separately? And why? Jarrett Drake: I would suggest that both need to happen; connecting with existing Black repositories is important and so is the establishment of new spaces. It’s important to recognize the work that many of these repositories have done, often times amidst the most difficult circumstances, because their trajectories are intimately tied to #ArchivesForBlackLives. In fact, you could argue that some of these repositories have been archiving Black lives for decades, and doing so with an explicit transformative agenda. But I advocate for new repositories primarily because we’re in a distinct political moment/movement where young folks need to be empowered as leaders and enacters of change; these new archives, even if they aren’t named as such, can offer that space for young people to lead.

AL: What does sustainability look like for the 21st century archive as positions for librarians, archivists, and catalogue caretakers are disappearing?

JD: The question of sustainability is one I think about a lot. I actually think that the more people who know about the power of archives and libraries the better positioned we are as trained librarians and archivists to advocate for our place in society. I think the approach of archivists, more so than librarians, has been one of “let us do the collection/preservation/access” for you (the public). But maybe where we need to turn is towards an approach where we teach the public and communities these skills, which some have called a post-custodial approach to archives. I think, though it may sound counterintuitive, that the proliferation of more post-custodial archives means that the public will value our craft more, not less, because they will see its relevance and utility.

AL: Is there a proactive role that the individual, non-archivist can take to archive marginalized histories, or even their own story? If so, do you have any tips about the best way to do this?

JD: I always encourage folks to look up who is doing a thing you want to do, and learn from them what their experience has been. There are so many community archivists in Black communities who have been doing this type of memory work for ages. They are mostly Black women, and they have excelled in spite of the most outward oppression. So I would tell someone who’s trying to get started to connect with those already doing it, and if after connecting with them you want to start your own thing, so be it. But we must tap into the expertise and the experience of the Black women who’ve been performing this labor, often unpaid and unseen.

AL: What is the role of technology in the future of archiving communities?

JD: Technology is a part of the future of archiving communities, but it’s not the end. Yes, we need people who are doing this work to be critical users and adopters of technology. This critical usage and adoption can happen only if people actually understand what the technology is doing. But, from my years as a digital archivist, I can attest to the reality that the same traditional barriers to archives will present themselves with new technologies. We will still need to bring communities together, still need to represent their lives responsibly, still need to promote engagement with materials. These needs are technology-agnostic, and we meet them through trust, humanity, and love.

AL: Do you think hashtags can increase people’s interest in documenting their stories in addition to raising awareness among institutions of their shortcomings as far as diversity?

JD: I think the hashtags can do that, but I would prefer that institutions take proactive steps to do this work as opposed to waiting until another Black child, woman, or man becomes a hashtag. Why does the pain have to be so visible, the viciousness be videoed, in order for mostly white institutions of libraries and archives to give a damn about Black lives? I think we’re in a technological and political moment much like a half-century ago when many white people watched the brutality of the Jim Crow south and could no longer, in a serious way, deny the horrors they witnessed. That’s what these vines and videos are doing; they aren’t teaching Black folk anything we didn’t already know about the violence and vitriol of anti-Black policing, which is redundant. The question I’d have for white librarians and archivists is: why didn’t you believe us before? Why did things have to get this severe for you to feel compelled to act? And for some white people, they still will not act. I’m not delusional in thinking that the presentation of Black death and suffering will move a great mass of white folks and their institutions into action.

AL: What sort of barriers do archivists of color face professionally in your opinion and what are the best ways to overcome them?

JD: We face racism. That’s the barrier. People who are at the intersection of marginalized identities—women, queer folks, and poor folks—experience structural inequality in American society and experience it within the archival field just the same. At its root, though, is anti-Black racism, which manifests its methods in particular ways against Black women, queer people, and those who grew up poor. I didn’t invent racism, and I don’t know of the best ways to overcome them. White people need to step up and partake in the labor required to address racism; much like cisgendered men need to step up and partake in the labor required to address sexism. Folks from privileged background in this field have to tap into their privilege and actually be invested in giving up some of that privilege. I don’t have high hopes for this, but that’s what is required. Folks from below have been pushing and pushing for change for years. It’s now time where those with actual power and influence in the field make it their first priority to combat the structural inequality (the racism, the sexism, the classism, the queerphobism) this work reproduces.

AL: What are some things that archivists should be mindful of when documenting the stories of people who have experienced trauma?

JD: Nothing gives you a right to document a damn thing. No ones “owes you” a story, a record, or an oral history. Treat these people and communities as full people, respect their time, and their right to tell you to leave; you know, basic human decency things that unfortunately need reiterating when it comes to Black people and the traumas we’ve endured. Also, archivists (or anyone) who want to do this work should do the reading. Like, actually sit down and do the reading before you start whatever project it is you want to start. There are so many archival scholars and archivists (Michelle Caswell, Verne Harris, Tywanna Whorley, just to name a few) who’ve written prolifically about their experiences doing this work and we’d do well to learn from them and cite their work as influential in our thinking. There are also writers and doers from outside the field whose work should be reading in regards to these matters. My favorite, as of late, is Ida B. Wells. It’s amazing that 100 years later many of the things she wrote about state violence, records, and justice are still as important now as they were then. It’s actually rather sad, too. Analú María López is a Librarian, Archivist and Photographer living on Indigenous land that, along with the larger region, has always been home to Indigenous peoples, including the Council of the Three Fires: the Odawa, Ojibwe, and Potawatomi, the Illinois Confederacy: the Peoria and Kaskaskia, the Myaamia, the Wea, the Ho-Chunk, the Menominee, the Thakiwaki, the Meskwaki, the Kiikaapoi, and the Mascouten. We currently refer to this land as Chicago.

Born and raised on the Southwest side of Chicago in the neighborhood of La Villita (Little Village), where she still resides, she is Guachichil/Xi’úi from San Luis Potosi, México. Interested in underrepresented Indigenous narratives dealing with identity, language, and decolonization she writes and creates photographic-based projects exploring these topics.

She holds a Master of Library and Information Sciences with a certificate in Archives and Cultural Heritage Resources and Services from Dominican University and a Bachelor of Arts in Photography with a minor in Latin-American Studies from Columbia College Chicago. Currently, she works at the Newberry Library of Chicago as the Ayer Indigenous Studies Librarian. To follow her work: www.analulopez.com