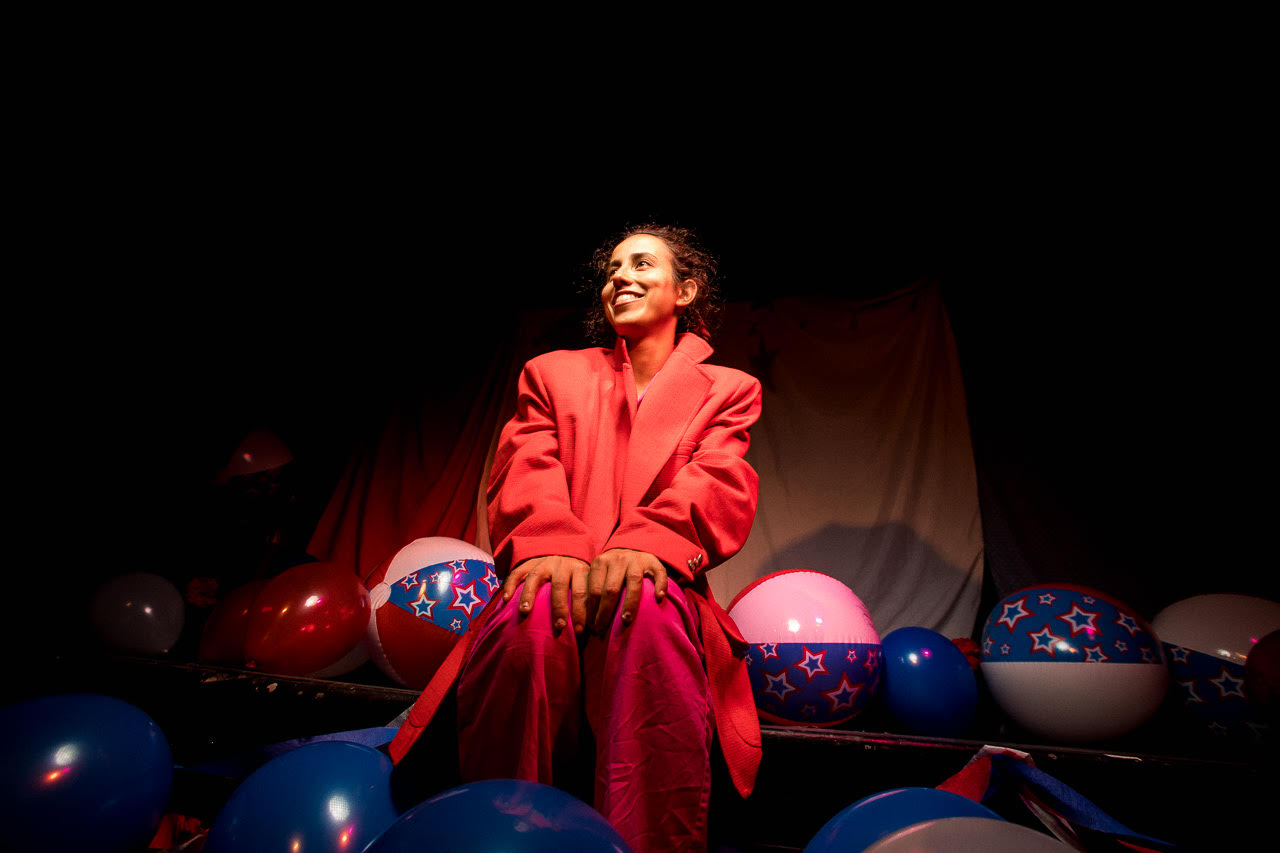 When I was younger, as a chronic fidgeter, holes and gaps would creep into my clothes, always looking like a moth had found a cozy meal. Because of this, I became familiar with the fraying yarn, a piece of a piece of clothing that could not be separated, nor could it be its own item. I tugged at these threads, always wondering whether or not I could find the scarf’s spine or its guts or its nerve endings. We do, after all, understand where my skeleton is and where your skeleton is and if we had been inside the meat, then surely science must have been inside the sweater and understood those blueprints. Though, I never got too far: I stopped, knowing that I would have wound up shirtless midway through the day.

Ida Cuttler contributed to the infamous (and not at all that famous) Hot Blog Dogs, one of my favorite mid-2010s artifacts. I found the website inspiring; as a misanthropic, anxious bibliophile who wanted to be fun and sociable and who could also be accused of turning small talk into a dense pondering of mortality and social constructs, it became a hidden tome of wisdom: you can just talk sometimes. It’s ok to let all your dumb-smart, smart-dumb thoughts appear and laugh at them and leave no mark and crumble like bread in milk.

In her performance “Comfortable Shoes,” Ida Cuttler also shouts into a microphone twice (probably more, I lost track): once, it’s to say “SHUT UP – …and thank you.” And did you know that Roquefort is not the same as feta? I mean, I knew, but Ida and violinist friend, Katie Klocke, did not, which is why somebody in the grocery store told them as much and that’s when Ida goes up to the microphone again. “And you know what we said? Nothing – but we were thinking…” and she goes on.

On. She. Goes. It’s comfortable for her. Comfortable like a pair of Mizuno brand Wave Riders worn by Wendy Davis in her 11-hour filibuster of an abortion bill. Comfortable like a friend and a pillow fort or a cup of lukewarm coffee. After all, if it weren’t comfortable, why would she continue? Why would she keep telling us stories? Anyway, she does. But before the microphone or the Matroshka, after the hot dogs and after the sheet canopies, and after work and after Wendy Davis, she begins necessarily
crucially

If you don’t know the character from “One Thousand and One Nights,” well, you will. Ida, who is as charismatic and ready-to-fail as she is confrontational, will pull different editions of “One Thousand and One Nights” off the milk crates behind friend and violinist, Katie, referencing the offloading of meanings from one translation to another – like the transition between “servants” to “slaves” – the acts of colonial theft that brought those stories to Chicago, and authors, specifically Victorian Richard F. Burton (“The F. stands for Francis,” Ida whines like a smug Francis.) You will become familiar with his wife, Isabel, and you will become familiar with Ida’s job at the feminist bookstore, one of the last remaining twelve feminist bookstores in the country thanks to Amazon and, despite this, Ida still has her Prime membership; do you?

This tension underlies the whole of “Comfortable Shoes” and becomes Ida’s authority and vulnerability. She will absolutely read an Amazon review of lemon verbena hand soap, pumping that shit into your hand, only minutes away from telling you how, while a boy wants to kiss her on a park bench, she begins pointing out every stick and leaf and squirrel so there’s never a

moment of silence. That tension arrives in both Ida’s desire for quiet and her love of stories, her love of stories and the fact that she speaks them to survive another night, the fact that Scheherazade survives another night. And Ida won’t talk about Aladdin just to gratify you, she won’t do anything for just your gratification, but she will point out that she’s still talking to avoid something, so much so that we eventually have a perfect penumbra and orbital circuit of what Ida is (not) talking about.

“Comfortable Shoes” is political, but it’s neither didactic nor partisan; it’s a deeply intimate transformation that, by sourcing different narratives and pulling them apart, allows us insight into Ida’s relation to the politics that affect her and the traditions of storytelling that have in some ways created her; and, by virtue of those threads drawn and pulled tight, she slowly sews her life and her stories into a sweater. Each tale of those boys who want to kiss her or come home with her remain small but dangerous (so precipitous that Ida climbs the pole in the center of the room and Katie pulls those strings together into a shanty of fear); Ida remembers the first marathon filibuster, a man trying to maintain segregation with only a bucket and an intern to guard the dryness of his pants, and then turns a Capri-Sun into Wendy Davis’s noble catheter.

Scheherazade is Wendy Davis is Ida Cuttler: the state of being a woman when men try to explain the “One Thousand and One Nights” and have the confident unawareness to call Cuttler’s “little project” little.

Weaving in and leaving frayed, digressing or bobbing out and about and through, Ida’s work simultaneously supports her audience while challenging us (do you still have an Amazon Prime account?) and she has, in writing and performing “Comfortable Shoes,” created a thorough, funny, kind, and brilliantly clever art object that becomes and deconstructs the subjects she references. And as she moves through her many stories and the drawings that she often murders, she begins to reveal her own stake in the game, wanting to pull the threads while still leaving the sweater whole so she can appreciate silence and Katie’s music; so she no longer has to dodge kisses and shoulders but can just tell stories for the joy they can bring. Survival or pleasure.

Ida says, again and again, “History is hungry.” She keeps finding the women history has made into meals and tries to pull them from its digestive tract before it’s too late. In this journey of reaching down the maw of a sleeping beast, Ida broaches our hypocrisies as paradoxes as jokes and instead of pressing her fingers into the wounds, she says “Me too. I am that as well.”

“Comfortable Shoes” is a profound work of athleticism and theatrical alchemy that is always the sum of its parts and then becomes more, grappling with the actions we take to keep ourselves safe and the ways our own safety is sometimes complicity and complacency, antithetical to what we need.

Or, shorter, an anecdote. Maria Mitchell told her students “Mingle the starlight with your lives and you won’t be fretted by trifles.”

In the final moments of “Comfortable Shoes,” Katie Klocke – who has played many songs by this point and anchored Ida when she threatened to leave the room (Ida does, by the way, walking through the Neo-Futurist’s state park and lobby and through the other entrance, an invitation to pee if you need) – Katie sits with Ida and, at last, there is silence.

And then, when the lights begin to fade, Katie asks Ida to tell her a story. There are stars falling across the beach balls. And there are many threads to follow.

Featured image: Ida Cuttler, wearing a red blazer over pink pajamas, sits with her hands on her knees center. On the ground around her, are red and blue balloons and red-white-and-blue beachballs. The beachballs have stars on the blue stripes. Photo courtesy of Brave Lux, Inc.

Persephone Jones is a Chicago-based writer, theater and visual artist. Their work focuses on the interaction between fiction and non-fiction; theory and practice; masks and faces. They’re a contributing writer and NewcityStage and have worked with theaters like the Neofuturists, tUTA, and Facility. You can find more about them here.