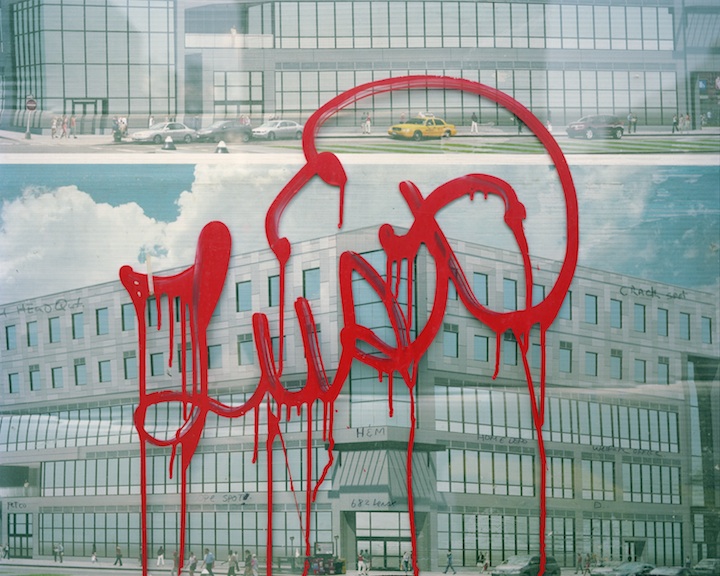 Continued from the previous page.

Tempestt Hazel: Let’s fast forward to your most recent series of photographs. While Harlem, USA seemed to mark the beginning of a lifelong love affair with portraiture, the new series of photographs in Harlem Redux shift the focus from people to place. People aren’t completely removed but they take a backseat when in the past they’ve been central. What motivated this shift?

Dawoud Bey: In Harlem Redux I want to talk about the physical place, how it’s changing, and how place is connected to memory. Since the landscape of Harlem is changing so rapidly, I wanted to describe what that looks like while it’s taking place. Within this change, the long time population of Harlem is being increasingly marginalized or disappeared, if you will. The absence of people and their diminished presence is deliberate, literally and metaphorically.

It’s also a strategy for visualizing the disappearance of one part of Harlem’s history as it experiences a profound population shift. There are still black people in Harlem, but we can also be sure that the rampant development and gentrification is not taking place for their benefit. It is important to me that I show this moment of transition and I didn’t think making portraits, or photographs of the human subject in the ways I had previously, was adequate to that challenge. I had to devise a conceptual and formal language that spoke to this current set of circumstances as they are happening; a language that speaks to the ideas of memory, absence, loss, and change. TH: What are the most profound changes you’ve witnessed in Harlem in recent years?

DB: Like cities throughout the country, Harlem is in the midst of ongoing and rapid gentrification. Writer [Michael Henry Adams] declared in the New York Times recently that we are seeing “The End of Black Harlem.” Simultaneously, these changes are bringing new amenities for a changing demographic while also driving population displacement from those unable to afford to stay in the community as rents rise and new construction continues to remove older buildings.

I can give you one example. Where small independent storefront businesses [once] stood on 125th Street and Lenox Avenue a Whole Foods is opening. It’s taking up a whole block and displacing all of those businesses. It’s also bringing with it other name brand retail stores.

At the same time, the Pathmark, a supermarket on east 125th that opened in response to Harlem once being a food desert a few decades ago, was recently closed. The site sold for the construction of a luxury apartment tower. Clearly, the demographics for Pathmark is different from Whole Foods, and the profile of future residents of that apartment tower are more consistent with Whole Foods. That difference exemplifies what is taking place in Harlem. And having photographed extensively in Harlem forty years ago, I remember all of those small businesses that are no longer there. They have been , for the most part, supplanted by upscale restaurants and name brand retail stores. TH: The title you’ve chosen for the exhibition, Harlem Redux, creates tension between a hope for the future of Harlem and what the neighborhood’s current reality is with the erasure that’s happening. Redux suggests that you have hope for a revival of the neighborhood’s legacy, a hope that seems pretty optimistic against the gentrification you’re observing and making visible for those who don’t live there. Can you give some insight into how you landed on this title?

DB: The title Harlem Redux alludes to the tensions and contradictions that I feel the current situation exemplifies. I also use it with some degree of irony. This is not the first time Harlem has undergone significant change. In that sense, Harlem is always being remade, is always in flux, and is always in the process of becoming and “re-becoming.”

The current wave of gentrification is more sustained, extreme, and accelerated than past changes that have occurred. It is driven largely by the fact that land in New York, and elsewhere, is a finite thing. The tensions are not entirely racial as much as they are economic. There are black people who can afford to move into this “new” Harlem and may want to be there because of its history and aura as much as there are white people moving to Harlem because, compared to Manhattan and real estate in general, it is still a fairly “good deal.” Harlem’s history as the “Cultural Capital of Black America” is often invoked as a kind of nostalgic marketing device. And there is still enough local flavor left to give the neighborhood a desirable and unique identity. But even that is not entirely true as the tension in Marcus Garvey Park over the drumming there shows. TH: What role do you see your work playing in national conversations about gentrification?

DB: I am an artist, not a sociologist or community activist. Within the limitation of what art can do, I hope that my work is part of the conversation that is taking place. I am working to visualize what this transformation looks like as it is taking place. I want to make clear, from my own subjective standpoint, what the current changes look like and how they feel; to make something around an issue that I think is vitally important and resonates through the language of visual poetics.

TH: As gentrification continues to impact and erase parts of Harlem’s cultural and physical history, do you think Harlem will eventually become an idea or memory that is left to exist outside of its geographic location?

DB: I do think that as Harlem continues to undergo these changes, there are aspects of the history and culture that will certainly exist more as memory. And they will be memories based on a history that most people living in the neighborhood never even experienced first hand.

That history has certainly increasingly made Harlem a magnet for tourism. On Sundays Harlem is inundated with tourists looking to attend a black church service, to experience this thing they’ve heard of. The Abyssinian Baptist Church is probably the church most beset by tourists on Sunday.

Near this church, the storied Renaissance Ballroom building was recently demolished. The building was originally built in the 1920s by black businessmen and Marcus Garvey’s Universal Negro Improvement Association (UNIA). It was a major black social space–Black debutante balls were held there, famous jazz musicians performed there, and the first Negro Basketball League played there. After the building was sold and demolished, the name of the luxury apartment tower that will stand in its placed was announced…The Renny! This is how developers simultaneously erase and invoike Harlem’s history. TH: How is this work relevant to Chicago? What does the conversation around it become when placed within the context of this city?

DB: The real estate dynamic in Chicago is different from New York, yet gentrification is taking place here. Communities with long culturally specific histories are in danger of seeing that history disappear as the homogenizing effects of gentrification overtake those communities. Anywhere in the urban environment where black, brown, or working people live is potentially subject to gentrification at some point. Pilsen is one example of a Chicago neighborhood undergoing gentrification. And there are others, including Logan Square.

If anything, my work is relevant in that it has to do with a dynamic that is occurring all across the country, including Chicago. Artists can be a part of the conversation around those changes by choosing to make work that provokes and contributes to that conversation. Being an artist should not mean that one is exempt from engaging with the larger social world. Art and artists can clearly participate in the larger social conversation and make work that makes these social tensions visible. TH: As you know, I’m really interested in personal and artistic legacies, so I have to ask a legacy question. What do you want your legacy to be? What do you hope that your grandchildren, students, and future generations of photographers understand about your life and your work up to this point?

DB: Well, I hope they realized I’ve tried to live a meaningful life, and hopefully a life that contributed something of substance to their own. As an artist, I hope to [be making] work that in some way illuminates certain aspects of the world that have value to me. This could be through my effort to place black subjects in most of my work, to seek out a place for the representation of black people as valued subjects within the discourse of art history, both on [museum and gallery] walls, but also through my own life as a black artist. I also hope that my drive to make something of excellence through my rigorous adherence to a high level of craft has inspired others to the same level of diligent aspiration.

Finally, I hope that part of my legacy will be one of creating a sense of the possible; that one can achieve and succeed in the larger arena of the world through the diligent pursuit and exercising of knowledge and passion exquisitely recognized, articulated, and then acted on.

Harlem Redux, is on view at Stephen Daiter Gallery through December 3, 2016. You can also catch his work in Witness at the Museum of Contemporary Art Chicago through February 19, 2017.

Tempestt Hazel is a curator, writer, and founding editor of Sixty Inches From Center. Her writing has been published in the Support Networks: Chicago Social Practice History Series, Contact Sheet: Light Work Annual, Unfurling: Explorations In Art, Activism and Archiving, on Artslant, as well as various monographs of artists and exhibition catalogues. tempestthazel.com