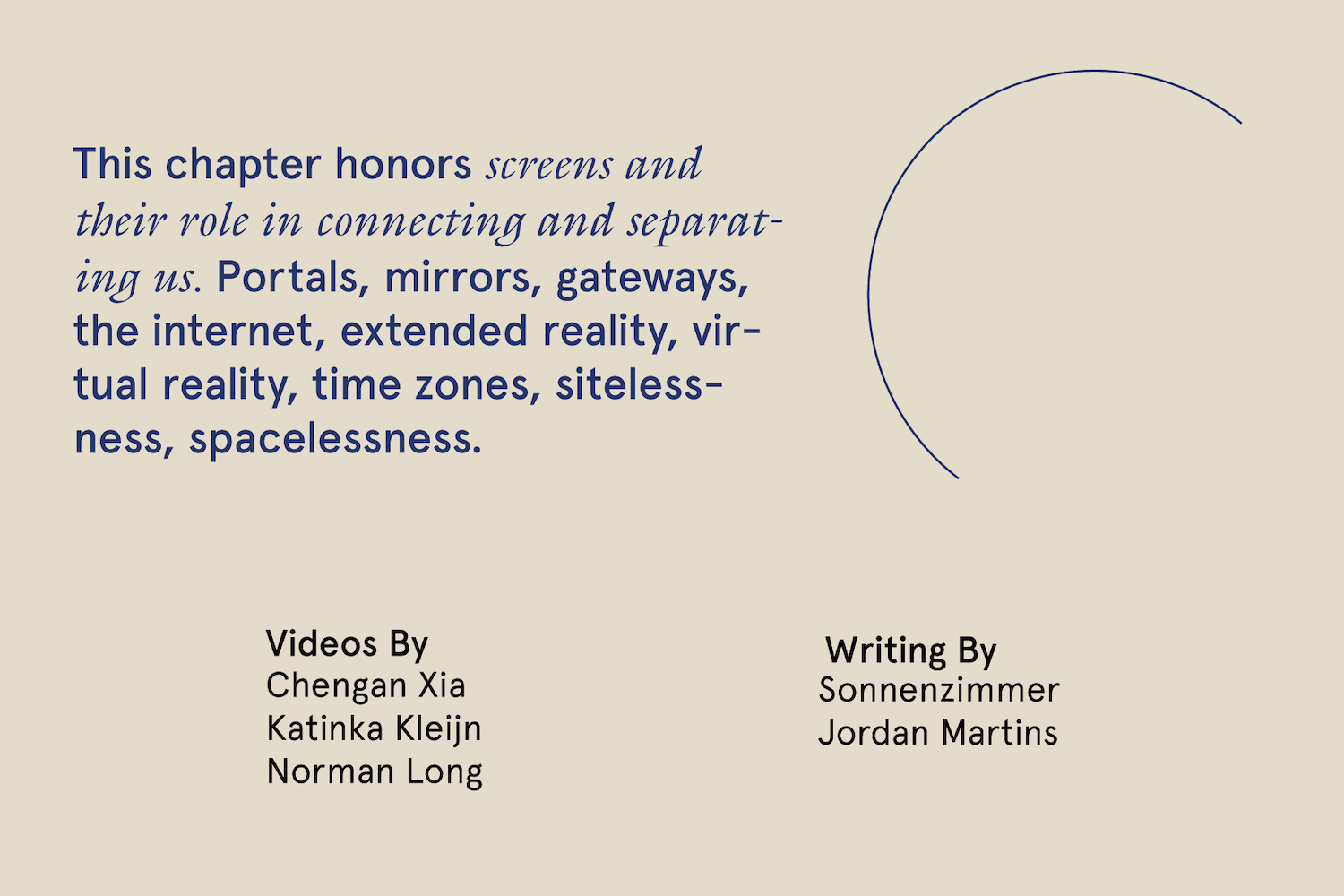 Presented by Elastic Arts in collaboration with Sixty Inches From Center, the We Series presents live art that blurs the line between performance and reality, with a soft spot for the participatory, ceremonial, ritualistic, immersive, and tutorial. The performances in this series will debut every Tuesday evening in January 2021. In tandem, Sixty will be publishing written companion pieces on the same day, authored by poets, playwrights, designers, musicians, bakers, and more. The We Series is co-curated by Deidre Huckabay and Lia Irene Kohl.

This text-based collaboration is created by Sonnenzimmer and Jordan Martins on the theme of Screens.

The adjacent performances can be streamed here.

When does a net become a screen?

“Television” derives from the Greek root telos meaning “end”, or “goal of completion”; and from the Latin root, videre, “to see”. This same word in German is “Bildschirm”. Bild, as in picture, shirm, as in an umbrella. In Old High German skirm, skerm means “protection”, and the root sker means “to cut”. A literal translation for Bildschirm would be “image screen”, or perhaps an “image cutout”. We can even imagine it to mean an image cutout from reality, thus a simulation to be witnessed.

When talking about a screen, we feel like there is a vector involved. For a vector, there must be two sides or two poles, parts that are situated directional from each other. Screening happens from a vector point of departure, e.g. film screening, mosquito screen, fire screen. One is guarded and shielded from the other direction. A clear division is informed from one side, yet from the vector’s other point, it’s all an unclear movement, moment, or object. The origin matters, yet once departed the vector is moving through space, not knowing where to stop, a moving arrow weaving paths with itself, lost in space. The original point—now separated, yet connected from the original event—is left permeable and osmotic.

There is a pendulum along that vector that swings back and forth, yet triggered when hitting its own threshold. This clustering event seems to be the ether of pre-communication, a premonition of a signal, a pregnant trigger system for thresholds to be met and discarded.

Let’s say this cluster is a pre-surface, the genesis of inner images, a photosynthetic stage, awaiting to be catalytic. Is this where spatial suspensions form matrices? Many functions floating, awaiting their parameters? What if this is a clue that binary systems do not exist, only tertiary systems of self-evaluation between poles and interstitiality. Me, myself, and I state this? 1 + 1 = 3?

While a screen can manifest itself as a physical object, it remains in close contact to its psychological counterpart. It evades being one or the other, while being present wherever we look. We increasingly have the experience of not knowing or remembering if we encountered something in real life or through a screen, and our days are more and more characterized by shifting back and forth between screen and non-screen perceptions of the world. Perhaps the virtual experience has grafted itself on to our self-encapsulated virtual experiences, our inner images. Once that connection is made, it’s concretely tandem and tethered. However, unlike the physical world, we can’t really prove the existence of our inner lives. Perhaps we’re outsourcing all inner storage to an external new neural network, a socially collective one.

A screen, by definition, is never what it appears to be, so then what is it? It can be many things: a hinge, vessel, mirror, spell, scaffold, translator, custodian, messenger. It’s a conduit actor, not a method actor. When we think of a screen, do we think of the object or of the information transmitted to us? Awareness of it shifts, with its objectness being more foregrounded when it is inert, and acting as an invisible conduit when it conveys information. Like a pearlescent surface, refracting light when activated, it emphasizes the changing atmosphere, yet splitting the colors around itself into a spectrum. A camouflage of structural efforts seems inherent to it.

A screen is like talking hosiery, obscuring and bringing to our attention in tandem. We feel naked without a screen sometimes. There was once a product, paint-on stockings—liquid hosiery applied with a brush by hand, creating a skin for the skin. Are screens liquid skin for our skin? Screens are arguably extensions of photography, a medium which was born of films, skins, of chemical residue on a surface calibrated to make a tangible and indelible response to an event.

So, when does a screen become a net? Both screen and net can only hold what is larger than their respective holes. A net captures that which does not pass through, while for a screen, that which passes through can also be the content, the substance, the transmission. A net is a net because of what it catches. Are both merely some non-objective stasis of the aftermath of two paths crossing? These activities are not easily defined. A screen can do many things — filter, shelter, remove, censor, examine, assess, defend from travelling. A screen is a screen because of what it lets through, and why. The fisherman doesn’t catch the fish that pass through the mesh of their net.

Perhaps what defines a screen is also its protective properties, protecting our collective inner lives, declining institutional criticism, description, or identity. So, to be a screen is to have a protective facet, one that faces outwards and inwards, yet doesn’t define itself outward or inward. If a screen is at times a barrier that allows some entity to pass through, filter, or project, do we become the residues or traces that accumulate on it?

If the goo of existence-information is not on one side of the screen or the other, instead always and forever pouring through, then the question is whether or not the screen (barrier/conduit/filter) is in fact necessary for this to happen. Perhaps this expanded notion of information is always entering us (screen or no screen, net or no net), with the screen merely giving a graphic representation of transference?

When Helium hits 2° Kelvin, it acts weird. It becomes a superfluid. All its molecules fall into the same low-energy state and start to behave in unison. This is when it can create its own frictionless fountain, has zero viscosity and passes through solid matter. It has been proposed that spacetime itself might be a superfluid. It does pass through solid matter. This may help in the long quest for a theory of everything. If there is a zero residue moment that happens at the barrier, object, screen, net, then sifting is just an indicator to help understand the problem of homogeneity, the problem of flatness, the problem of monopolies. All of which we are facing at this moment.

A screen doesn’t care about chronology. It’s only job is manifestation. Screens are just another surface. So, do all surfaces behave like this? An ebb and flow? Screens ebb and flow, but not in time or in place. A screen is a dynamic of repetitions, cycles, and timeless tides removed from physicality.

The Diamond Sutra states that a thing is only what it is, because of what it is not. What a screen is and what it does is not about being a discrete object, or even its impressions. A screen is a single node of a broader system of image (and information) projection–a network of screens. What a thing is or is not, furthermore, is itself in a fluid state, specifically here reflecting on the piles of defunct screens in landfills, or obsolete tablets or phones that revert to humble purposes (an alarm clock, a way to play music, something for the kid to play on). When a screen loses its connection to the network, how does its properties change? Could a screen become a hammer?

When the USS Enterprise hails another ship, the image projection that appears on the screen with the captain of the other vessel has a strange omniscience to it, as a kind of shorthand for a vast apparatus (instant translation, universal AV tech between remote civilizations), and we sometimes wonder if it is kind of a proxy for the screen through which we viewers are encountering the entire scene. The kind of premeditated techno-infrastructure necessary for different civilizations to encounter one another in less-than-physical terms, virtual terms, implies a superfluous and superfluid flow of time, making all things available to the crew on deck in one convenient all-seeing screen. As these crewmembers kick back into their chairs, the curvature of their back is the one indicator that the proxy is held by our bodies. If we were to flatten the idea of our fingers, would it be our tongue?

—
Featured image: A graphic that gives information about the Screens iteration of the We Series. Created by Lindsay Zae Summers.

Jordan Martins is a Chicago based visual artist, curator, and educator. He received his MFA in visual arts from the Universidade Federal da Bahia (UFBA)  in Salvador, Brazil in 2007, and is a lecturer at the School of the Art Institute of Chicago and North Park University. He is the executive director of Comfort Station, a multi-disciplinary art space in Chicago. Martins’s visual work is based in collage processes, including painting, photography, video and installation, and he has exhibited nationally and internationally. His work has been featured in exhibitions at Goldfinch, The Mission, Evanston Art Center, LVL3, The Franklin, The Museu de Arte da Bahia, Zeitgeist, and Experimental Sound Studio. He was a resident in the Chicago Artists Coalition’s HATCH program in 2013. Martins is co-director of the Perto da Lá <> Close to There, a multidisciplinary project with international artists in Salvador, Brazil and Chicago. Photo by Stephen Garrett.

Sonnenzimmer is the collaborative practice of Nick Butcher and Nadine Nakanishi. Their work investigates and challenges the preconceived notions of the graphic arts. Their experimental studio was established in 2006 in Chicago. Together, they explore the physical and psycho-physical nature of graphics through publishing, exhibitions, design, music, and performance. While they move through an array of media, their focus is on triangulating a deeper understanding of graphic expression at large. Photo by Anne Elizabeth Moore.